After fleeing Aleppo and moving to the Turkish capital in 2015, Siham, a widow and mother of five, had few options other than to let her eldest child, 11-year-old Yussef, take a job at a handbag factory.

Yussef brings home a monthly salary of 400 Turkish lire (about 100 euros), working 13-hour shifts, six days a week. Until recently, Siham combined whatever aid she could gather from local charities with Yussef’s earnings to pay the rent and feed her children.

It was never enough.

“Sometimes we couldn’t afford even a loaf of bread,” said Siham, seated in her cramped living room.

Siham was faced with the prospect of having to pull her two younger sons, aged nine and 10, out of school so they could also work.

Earlier this month, Siham became one of the first recipients of an EU-funded programme that aims to provide cash assistance to one million of the most vulnerable refugees living in Turkey. At least 500,000 refugees are expected to be enrolled in the programme by April and another 500,000 by the end of 2017.

If successful, it will be the largest ever EU-sponsored cash aid programme.

The Emergency Social Safety Net (ESSN) is being rolled out with an initial 348 million euros in financing from the EU’s Facility for Refugees in Turkey, a three-billion-euro fund to provide support over two years. The aid was pledged in return for Turkey’s cooperation in deterring refugees from moving on to Europe as part of the EU-Turkey agreement that came into effect in March 2016.

The agreement has been criticised by rights groups as a cynical attempt to outsource the EU’s so-called refugee crisis while turning a blind eye to human rights abuses perpetrated by President Recep Tayyip Erdogan’s government. But the ESSN could offer a lifeline to refugees like Siham.

Refugees deemed eligible are given debit cards, which are recharged monthly and can be used at shops to buy food and other essentials, or at ATMs to withdraw cash. The amount of money on each card is based on the size of the family, with each family member adding a value of 100 lire (25 euros) to the monthly allowance. As the head of a family of six, Siham’s debit card will be topped up with 600 lire (150 euros) a month.

With her rent and utility bills totalling 350 lire a month, she will be left with some additional cash to spend on whatever she thinks the family most needs.

“I find this help better than others… because you know what you need most and your needs change,” Siham said. 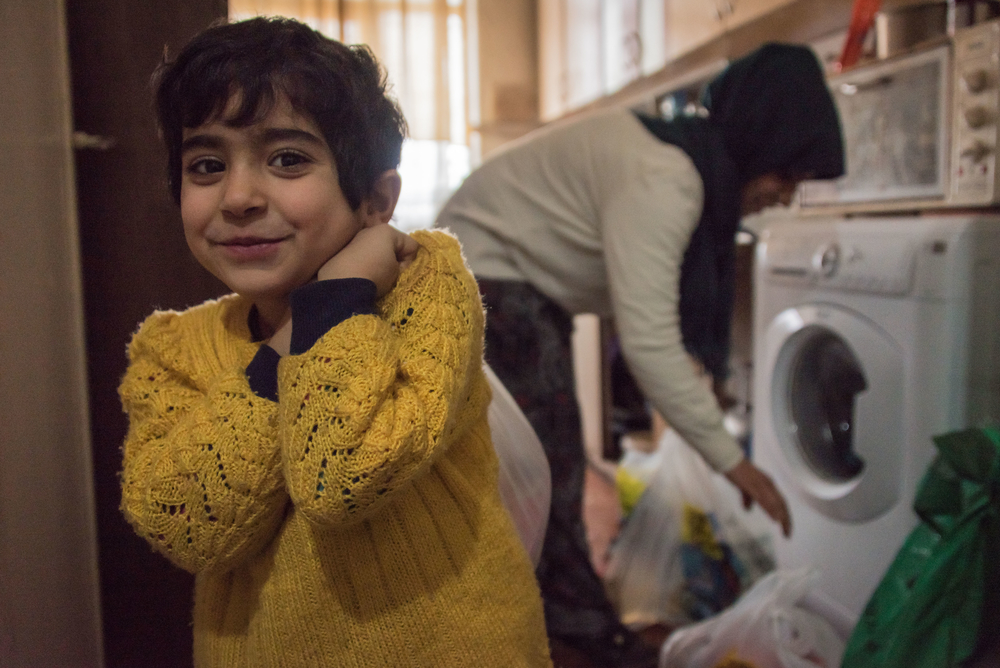 Diego Cupolo/IRIN
Siham unpacks groceries in her kitchen with her 4-year-old daughter, Saliha

Cash-based aid programmes for refugees are springing up all over the world, but particularly in the Middle East where the majority of those displaced by the war in Syria are living in cities rather than camps.

The ESSN differs from similar programmes, such as the smaller one the UN’s refugee agency, UNHCR, is piloting in Lebanon, not only in scale but also in terms of the prominent role played by the Turkish government.

The EU insists its humanitarian projects “are carried out by humanitarian organisations, not by governments”, and that the World Food Programme together with the Turkish Red Crescent are leading the implementation of the project. But enrollment is largely taking place at government-run centres and refugees must first register with Turkey’s Directorate General of Migration Management (DGMM).

Whereas in the past, refugees had to register with individual aid agencies and government departments to fulfill specific needs, such as housing or food assistance, the ESSN is meant to mirror Turkey’s existing welfare system, explained Jane Lewis, Ankara’s Head of Office for ECHO, the EU’s emergency aid department.

“This isn’t just a programme for us. It’s a model,” Lewis told IRIN. “It’s a new way of doing business in humanitarian assistance and we’re trying to show a different way of approaching this with [host] governments… we’re also seeing how we can replicate this in Lebanon and seeing if we can do this in Greece. It’s kind of a laboratory of best practice.”

With both Syrian and non-Syrian refugees eligible for the debit card, many previously unregistered refugees are now registering with the government and high demand has caused some delays in the enrollment process.

The criteria for eligibility has not been made public due to Turkish officials’ fears that applicants might provide false details to skew results in their favour. But Lewis said the programme would most likely target single mothers, the disabled, the elderly, and those who can’t provide for themselves. Once registered, refugees will be encouraged to update their circumstances regularly and may qualify at a later stage.

“Anyone who has applied will become eligible if the criteria changes,” Lewis explained. “We’re trying to get the critical mass of people on board and then look at the most critical cases once they come to the surface.”

Still, the lack of defined criteria leaves the Turkish government and the EU open to criticism about the programme’s lack of transparency.

Gülsüm Ağaoğlu, a member of the refugee and migration committee and the executive board of Turkey’s opposition socialist Peoples' Democratic Party (HDP), argued that keeping the selection process opaque could lead to discrimination.

Ağaoğlu said the Turkish government has favoured Syrians of Sunni and Turkmen descent in the past, while denying or complicating access to social services and registration assistance for refugees from Kurdish areas in Syria.

“They have done it in the past and they will do this again with the card programme,” she told IRIN.

Ağaoğlu added that such a large-scale programme required strong third-party monitoring, which she felt the ESSN lacks.

A more concrete obstacle to accessing the programme is the requirement that applicants have a street address. This will exclude the many refugees who do seasonal agriculture work and live in temporary structures and tent encampments around the country. 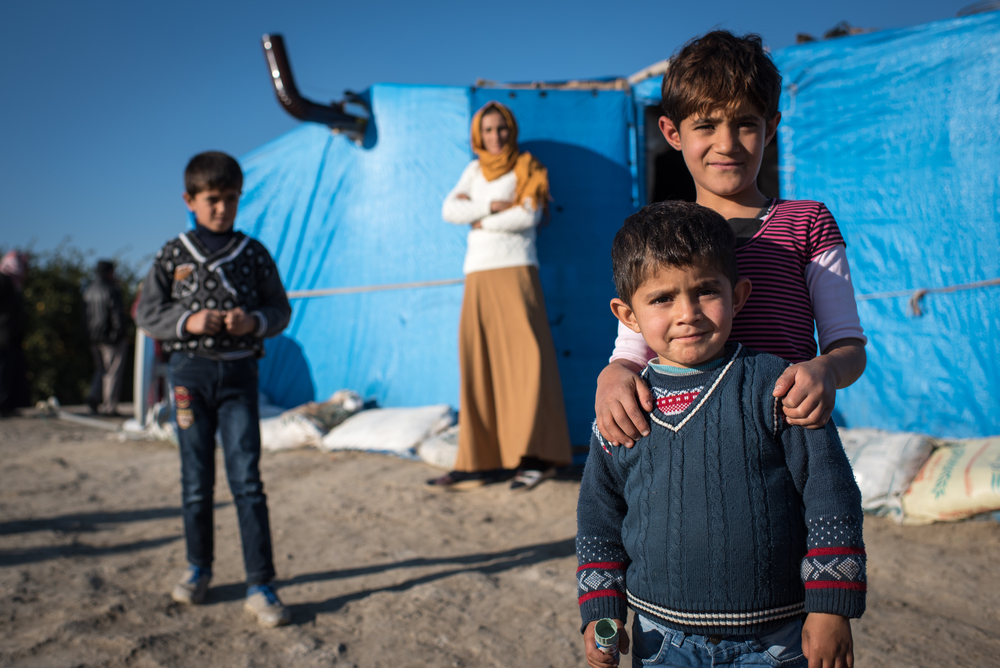 The requirement that refugees register in-person at enrollment centres – mostly located in cities – also means the programme will initially only reach urban populations and those with access to transportation.

Broader concerns about the ESSN go back to its links with the EU-Turkey agreement.

The EU has been under pressure from the Turkish government to speed up distribution of its promised three-billion-euro package of support. Some 2.2 billion has so far been allocated, but just 748 million has been disbursed. Lewis admitted that the screening of aid projects and the allocation of funding has been difficult to achieve within the two-year time limit set out by the agreement.

Some view the ESSN as a cop-out: an all-too-convenient way to dispatch the EU’s promised aid that is unlikely to have long-term benefits for refugees.

“It’s an easy way out,” said Erdem Vardar, director of YUVA, an Istanbul-based NGO focused on refugee education, rights, and sustainable living. “It’s harder in the long term to create jobs for refugees in this country. Of course, it’s much easier to give people money.”

Vardar said the ESSN may be helpful in the short term, but that integration initiatives and career development programmes are needed to foster long-term social cohesion for refugees who may remain in Turkey for decades to come.

He added that 100 lire per person may be a decent allowance for people living in Ankara, but that rents are much higher in cities with denser refugee populations, such as Istanbul and Gaziantep.

“In Istanbul, you will never find rent of less than 400 or 500 lire,” he told IRIN. “The only reason refugees are able to afford living in these cities is because many people share the same apartment.”

According to Joelle Eid, a spokeswoman for the WFP in Turkey, the monthly allowance was initially planned to be more than 100 lire, but Turkey’s Ministry of Family and Social Policy was uncomfortable with giving refugees a higher allowance than its citizens receive under the state’s welfare system.

As it is, the programme has not gone unnoticed by Turks living below the poverty line. After speaking to IRIN, as Siham left her apartment in Önder, a low-income neighbourhood in Ankara, she was surrounded by local mothers who asked why she should get a debit card and not them. The confrontation was cordial but revealed an underlying sense of grievance that has emerged in a country now hosting an estimated 3.1 million refugees.

For the time-being, the ESSN programme remains in its infancy, with many possible adjustments in the future, including additional cash for families that keep their children in school.

Siham said her son, Yussef, will continue working in the handbag factory, but that the ESSN means she can keep her two other boys in school. With her first cash transfer, Siham paid the rent, utility bills, and several debts owed at local shops.

“I was most worried about paying the rent,” Siham said. “The landlord made it clear that missing one payment on the first of each month would mean we would get kicked out in the street.

“For now, we don’t have to worry about this.”