Martina Wanago was sick. In fact, she was sure she would die. She had contracted HIV, which has reached epidemic proportions here in Indonesia’s remote and restive province of Papua. And like many of those infected, she didn’t know what was wrong with her.

“All I could do was just wait for God to call me,” Wanago said, closing her eyes as firelight flickered on her face in a traditional roundhouse in Kambele, a remote artisanal mining village deep in cloud-shrouded mountains.
But it was here, in this unlikely spot, that she found salvation. Or rather, she found treatment – at the Waa Waa Hospital in the nearby community of Banti.
The hospital was built by Freeport McMoRan, one of the world’s largest mining companies, based in Phoenix, Arizona. It is one of very few positive developments that the industry has brought to indigenous Papuans.
In fact, Papua’s resource wealth is intimately connected to its tortuous past half-century, which has included a foiled attempt at independence followed by an armed rebellion in which Indonesian security forces have killed tens of thousands of indigenous people.
A more recent consequence of mining and militarisation is that – along with an underfunded healthcare system – they have contributed to an HIV epidemic in Papua.
Timika, near the Grasberg mine, which is majority owned by Freeport, was a village of less than 1,000 indigenous Kamoro people in the 1950s. It boomed throughout the 1990s, becoming a city of 120,000 people, including men who had migrated to work at the mine and who created a market that attracted sex workers from other parts of Indonesia. Among newly-arrived female sex workers, HIV rates jumped from zero to 1.4 percent between 1997 and 2002, according to a study published in the journal Sexual Health. From mining towns, HIV has spread even to remote villages with no access to healthcare.
It is "one of the few national epidemics that continues to spread", according to a 2013 study conducted by Indonesia’s health ministry. In Papua Province, reported AIDS cases [320 per 100,000 people] are almost 20 times the national average, researchers found. And the study indicated that 88 percent of HIV-positive people in Papua and neighbouring West Papua provinces were unaware that they had contracted the virus.

Wanago and her husband had walked for three days from their ancestral village to get to Kambele. They came to pan gold from as much as 230,000 tonnes of untreated mine waste dumped daily into the river by Grasberg, which is one of the world's largest goldmines.
They had come to find opportunity, a way to make a living to support their children. Instead, they found HIV.
Like so many others, Wanago’s husband contracted the virus from a sex worker in one of the brothels that cater to mining communities. And then he passed it on to his wife. 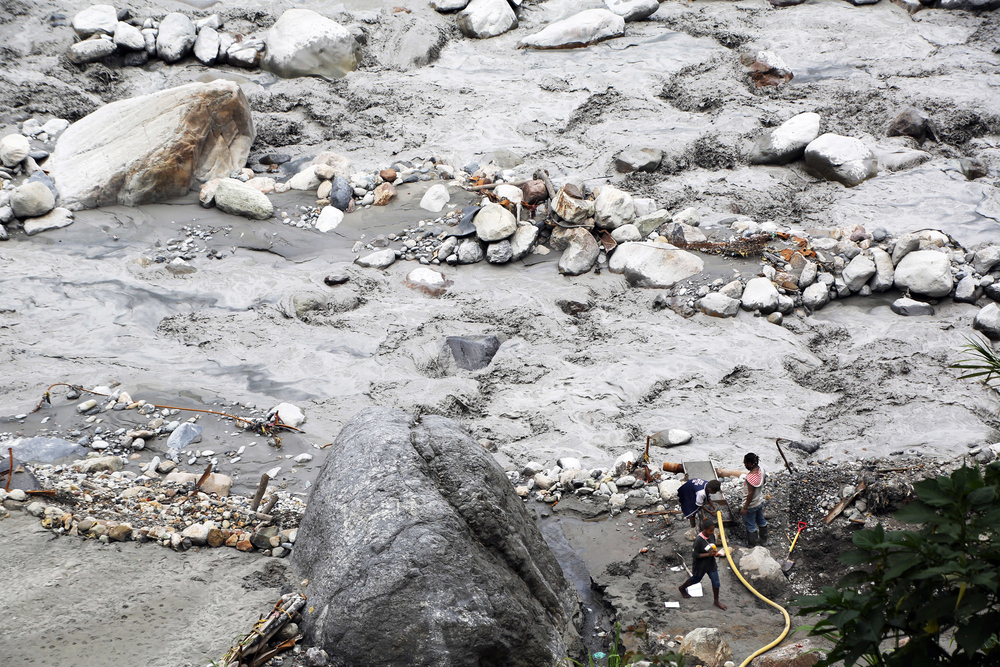 Susan Schulman/IRIN
Artisanal miners extract gold out of waste from the Grasberg mine dumped into the Aiwa River
The Indonesian government has designated the Grasberg mine a “strategic industry”, which allows the military to hold exclusive contracts over its security. In Papua and the wider West Papua region, some officers are involved in an illegal but booming business on the side – the sex trade.
A Papua provincial government official, speaking to IRIN on condition of anonymity, provided specifics of one brothel operation, which includes 57 “houses” and about 180 sex workers.
“These are the owners: the oldest, retired military man – he owns more than one house – one active military [officer] who works in the military hospital, one active police officer, and civilian migrants including Chinese descent, backed by security,” said the official.
*The Catholic Justice and Peace Commission of the Archdiocese of Brisbane received similar information during a recent fact-finding mission. "Church workers and gatherings of a number of Catholic congregations in a number of locations told our delegation that the HIV problem is worsened by infected sex workers being brought in, often by the military," it said in a May report.
The military did not respond to calls and emails seeking comment.
**The Indonesian health ministry's 2013 study found that 3.5 percent of women in Papua and West Papua provinces who engaged in commercial sex were HIV positive.
Over the past decade, health authorities have carried out prevention programmes in both provinces, which "contributed to halting the growth of the epidemic", according to a report published by the Burnet Institute, an Australian medical research organisation. Between 2006 and 2013, the HIV rate stayed at high but stable rate of 2.9 percent among indigenous Papuans, the institute said.
However, the health ministry's study found that more than 85 percent of those who tested positive for HIV while participating in the survey did not know their status beforehand, "thus indicating a huge need for increased targeted HIV testing programs". 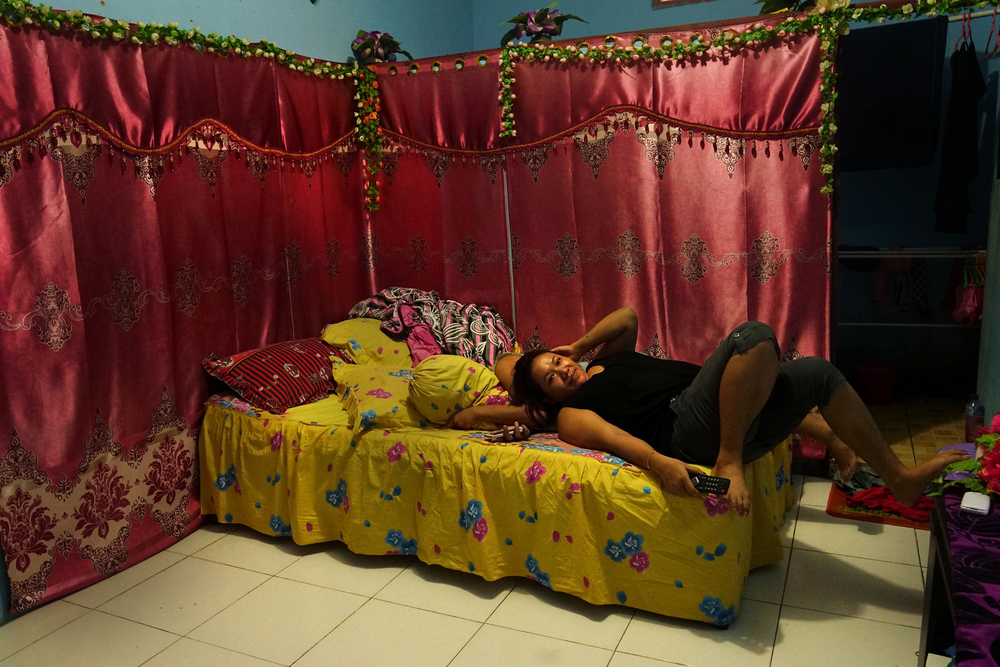 Of course, mining is not the only reason the military is in Papua – although the two are historically intertwined.
In 1960, Freeport McMoRan was known as Freeport Sulphur and its executives became interested in gold deposits that had been discovered high in the mountains of what was then known as Dutch New Guinea. (The region now consists of West Papua Province and Papua Province, which borders the independent nation of Papua New Guinea to the east. Somewhat confusingly, the Indonesian provinces are often referred to collectively as West Papua)

At that point, indigenous Papuans who had been living under Dutch rule were three years into a 10-year process leading up to independence. An Indonesian General named Suharto – who was later to become president after a bloody coup – hijacked that process and began secret negotiations with Freeport, which granted the company mining exploration rights.
With so much mineral wealth at stake, as well as an expansionist Indonesian military, Dutch New Guinea became a battleground, and Indonesian soldiers were sent in to maintain control over the political situation.
Rather than a plebiscite as specified by a 1962 agreement under UN auspices, the 1969 vote included only about 1,000 Papuan leaders selected by Indonesia, who cast ballots under the threat of violence. Despite such obvious coercion, the UN accepted the results and Indonesia annexed the region.
Thus began a rebellion that continues to this day. 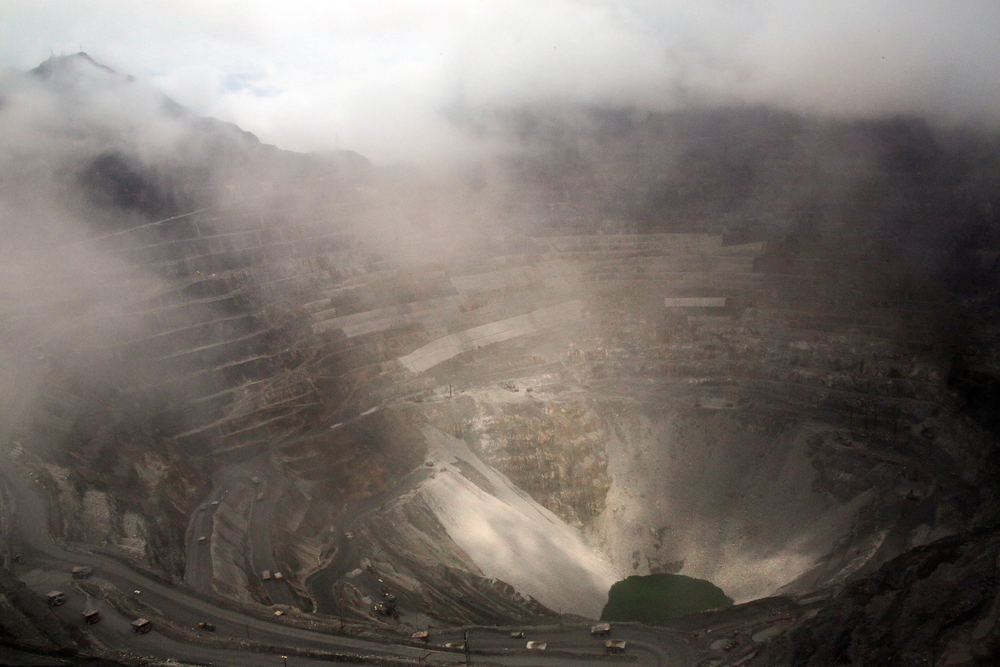 Susan Schulman/IRIN
The Grasberg mine, one of the biggest gold and copper mines in the world, is carved out of the mountains at 4,200 meters
Indonesia strictly limits media and researchers’ access to Papua, and local civil society groups are under constant surveillance and threats of arrest. So independent statistics on the number of casualties are hard to come by, and they vary widely.
“In aggregate, many tens if not hundreds of thousands of West Papuan people have been killed under Indonesian rule as the direct result of explicit government policies,” according to 2013 article in the Griffith Journal of Law.
The activist group, Free West Papua, says the Indonesian regime has killed or disappeared 100,000 people since 1962. In addition: “During the mid-1990s the Indonesian military systematically destroyed village gardens, causing widespread famine.”
The election of President Joko Widodo in 2014 brought new hope for Papuans. He publicly stated his commitment to human rights, met with Papuan religious and political leaders during his first year in office, and last year ordered the release of five political prisoners. Yet, little has been done to rein in the security forces.
Today, Papua remains by far the most militarised province in the country, according to Made Supriamata, a PHD candidate at New York State’s Cornell University who researches Indonesian security forces. He told IRIN that there are three times as many soldiers in Papua than in any other province.
As Papua’s indigenous people were being decimated over decades of conflict, they came under another even more powerful demographic threat: Indonesia began encouraging migration from other parts of the country into the province. According to a 2010 study by the University of Sydney, indigenous people made up 96 percent of the population of West Papua (including both provinces) in 1971; by 2010 that figure had fallen to only about 48 percent.
And now, Papuans are dying of HIV.

Many countries around the world have, of course, shown that HIV does not have to be fatal. But that requires a healthcare system that functions to at least a minimum standard of providing access to a large portion of the population.
Indonesian health ministry reports show that in an area of 53,000 square kilometers – bigger than Croatia – a population of 400,000 is served by only one 70-bed hospital, and 15 health centres, two of which don’t even have a doctor.
The best hospital in the province, and the only one in the highlands region, is the Waa Waa Hospital in Banti where Martina Wanago and others receive treatment as part of its HIV programme. The hospital receives between 100 and 120 patients a day from three nearby villages. But the majority of Papuans live in remote areas, far from this hospital, and are left without access to modern medicine.
“We worry about the other villages,” said Dr. Milke, who runs the programme.
“In those villages, they rely on supernatural healers and beliefs,” she told IRIN. “We only know what happens there if someone comes here sick and they tell us their wife or husband has died and so have many others.” 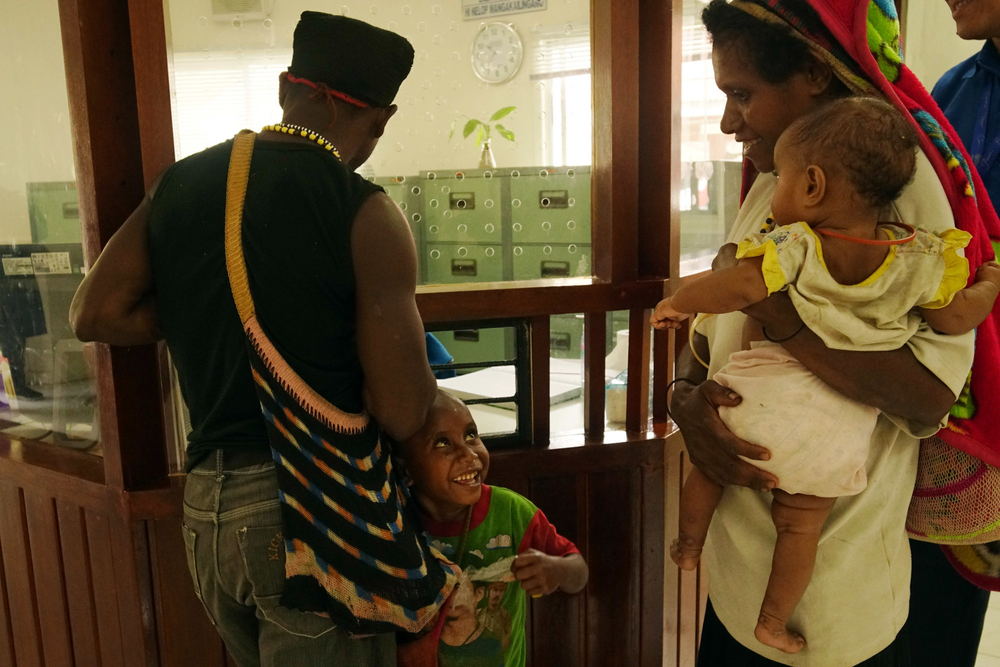 Susan Schulman/IRIN
The Waa Waa Hospital in Banti
The HIV epidemic has fed into theories that the Indonesian government is trying to wipe out the indigenous population.
“Papuans believe HIV was intentionally introduced into Papua by Indonesians in order to kill us,” one Papuan confided to IRIN. “And that the government intentionally leaves the disease to spread widely without taking serious measures to overcome the problem.”
There is no evidence the theory is true, but some Papuans have reached the conclusion given that government policies have reduced them to a minority in their homeland. And security forces continue to arrest, abuse, and sometimes kill those who speak out, according to advocacy groups like Human Rights Watch. Despite those pressures, Papuan activists continue to campaign for independence.
“Under international law and practice, we have a right to self-determination,” one told IRIN, on condition of anonymity. “It is our land.”
Wanago has turned to activism too, although it’s of a different kind – she’s drawing on her own experience to encourage people to use condoms.
ss/jf/ag
*(This story has been updated to include comment from the Catholic Justice and Peace Commission of the Archdiocese of Brisbane.)
**(An earlier version of this story included figures from two sources that suggested inflated rates of HIV among sex workers.)
Share this article
Join the discussion