Residents of Timbuktu, Mali’s cultural capital, are hopeful the city can draw on its long history of tolerance to heal social relations frayed by a 10-month Islamist occupation, which Arab and Tuareg communities are still being accused of having abetted.

In his book* on the recent Islamist occupation of Timbuktu, senior government official Houday Ag Mohamed, a Tuareg, explains that successive insurgencies over the years led to a wave of discrimination and hostility against Tuareg and Arabs living in Mali. It is “an ostracism you can see in the looks full of hate and recrimination they receive,” he said.

A Timbuktu resident who gave his name only as Mohamed says he sometimes feels mistrust from other communities, and hints that the organization that nominally represents the Tuareg, the National Movement for the Liberation of Mali (MNLA), has much to answer for. The MNLA captured parts of the north after the March 2012 coup in the capital, Bamako; they were subsequently overthrown by the Islamists.

“Did they ask people if they wanted an insurgency? There was no consultation. They just left us to reap the harvest,” Mohamed said.

The Islamists were beaten back by French forces, which intervened in January 2013 as the insurgents began to advance towards Bamako.

But Salem Ould el Hadj, 73, a retired teacher, warns against oversimplifying Timbuktu’s complicated ethnic mosaic. “There is not some big racial divide here. We have never had apartheid here. People pray together, read together and travel together. Go around the markets and you will see white and back traders working side by side. Go back in history and you will find that it has been like that since the 14th century,” he said.

Although the Islamists have been driven away from the northern cities, kidnappings and suicide bombings remain a threat.

The focus now is on reconciliation and development. Timbuktu residents speak of a rapprochement among the different communities and of returnees being reintegrated.

But many are also asking difficult questions about complicity and retribution. And for Malians of a certain generation, there is a strong sense of déjà vu.

Abdel Hamid Maiga, who runs the local NGO Action and Research for the Development of Local Initiatives, recalls the 1996 gun-burning ceremony in Timbuktu, which followed a peace agreement between Bamako and the Tuareg. “It was all very impressive, very moving. But what came after that? Nothing.”

Abdel Maiga says trust will not be restored easily.

“Our history is of [mixed races], of people living together and inter-marrying,” Maiga points out. “That is the case for 75 per cent of the people here. Come to my house and you will find a white Arab connected to me by blood. That is Timbuktu”.

But he says there were incidents from the crisis that cannot simply be glossed over. “It’s difficult. We have to talk about these things, and we have to forget. For example, our office premises was looted. We lost a vehicle and computers. I know who did it. They were friends of mine, and I am not going to forget - nor are they. But does that mean we can’t live together?”

He also emphasized that neglecting the underlying problems that contributed to the rebellion will only make a fresh insurgency more likely.

As appeals go out for more aid to Mali, Maiga says the government and people have a duty to ensure the money is well spent and that corruption is rooted out all levels. He says that as Timbuktu moves out of crisis, youth - from all communities - must not be left out of the rebuilding.

Members of Islamist group Movement for Unity and Jihad in West Africa (MUJAO), which is in control of much of northern Mali and has imposed Sharia law 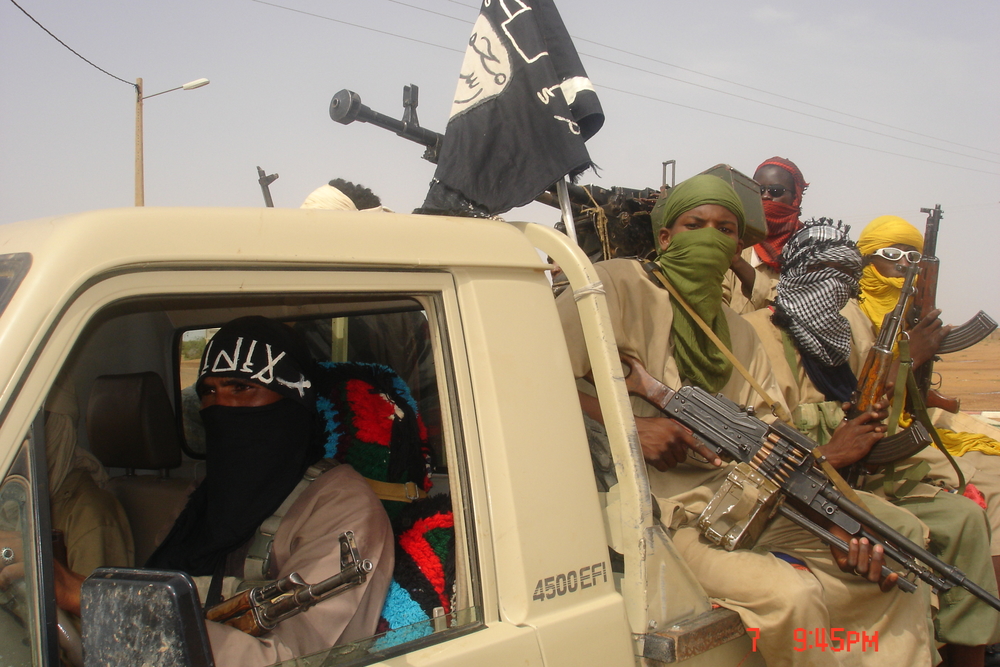 “Our office gets a constant stream of young people coming through, many of them well qualified and looking for work. We do what we can for them, trying to help them find jobs, acting as a kind of laboratory. But the [unemployment] problem is there, and if this is not resolved, there is an obvious risk of things breaking down.”

Diadié Hamadoune Maiga headed Timbuktu’s crisis committee during the Islamists’ rule, liaising with the rebel leadership. Now, he is working as a local peacemaker, steering meetings between different groups in Timbuktu.

He voiced disappointment in the government’s approach to national reconciliation. He reserves particular criticism for events like the ‘assises du nord’, or consultations about stability in the north, held in Bamako in November 2013, which he says were unrepresentative and dominated by northerners based in Bamako.

“There is not some big racial divide here. We have never had apartheid here. People pray together, read together and travel together”

“The state does not have the experience and the sensitivity to run this kind of dialogue. It doesn’t know people’s customs and traditions. You can’t make a meal if you don’t know the ingredients. The state should simply be supporting those who know how to make peace,” he said.

Hamadoune Maiga’s approach is much more local, relying on religious leaders and community representatives to address their respective groups. This, he says, can contribute to a climate of peace and to “talking with real openness about what happened, what is acceptable and what is not.”

“There were rebellions before, but they were against the state. Most of the population was not touched. What happened this time hit much harder,” he said. “You had ordinary civilians murdered, attacked in their own homes, watching as everything they owned was looted. Someone comes to you after doing that, and there will be no trust or love. There will be hatred. We must have honesty and justice. We need proof not hearsay. We need pardon when the crimes are small and the apologies are sincere.”

Learning from the past

With few signs of real dialogue between the government and the MNLA, there has been a great deal of speculation about past peace agreements, notably the National Pact of 1992, and why they did not provide a lasting settlement.

Various arguments have held: that the promised investment in the north did not materialize or was misappropriated; that militant Tuareg never believed in the peace agreement and simply waited for an opportune moment to launch a new insurgency; that the government mishandled the north, engaging in heavy-handed military tactics and breaking its own promises; and that Islamists arrived in the region with their own agenda, polluting trading roots and distorting inter-communal relations.

And there remains a dispute over how to view the recent events in Timbuktu.

While Hamadoune Maiga speaks of the importance of an inclusive dialogue, he warns that many Malians will be unable to tolerate solutions involving the MNLA. “Ask people here and they will say, ‘This is the movement which held the door open for the extremists.’”

He added: “It is not even as if the MNLA represent Mali’s Tuareg. It is a small group of individuals who have been close to power. There is a huge gap between what they say and the reality on the ground.”

“There was never a civil war here,” said El Hadj Baba Haidara, Timbuktu’s former member of parliament, arguing that the main threat came from outsiders rather than Malians.

Haidara says now is the time to ensure money is channelled into Timbuku to address decades of neglect. “We have had too many people who enriched themselves and not the region,” he argues. “If money is given for a road, then a road must be built.”

But he warns that economic support must not turn into domination; Malians have to make their own peace. He is sceptical about the UN’s expanding Stabilization Mission in Mali (MINUSMA).

“We are not Afghanistan, and we do not need this kind of interposition. I have told the UN people myself, ‘If you are here for more than a year, you will have failed.’”