On 3 February, judges in the Extraordinary Chamber of the Courts in Cambodia (ECCC) – more commonly known as the Khmer Rouge trials – sentenced Kaing Guek Eav (“Duch”), the former chairman of the Khmer Rouge’s Tuol Sleng security prison, to life in prison.

This ruling overturned a 2010 sentence of 35 years, which civil party lawyers had appealed.

Mental health experts are monitoring the impact of such rulings and the entire judicial process on survivors due to the particularities of this tribunal; its rules grant them a larger role than in any previous international criminal tribunal, prompting longstanding questions about whether truth-seeking hurts or heals war wounds.

In addition to testifying as witnesses to corroborate the prosecution’s case, survivors of Cambodia’s 1975-1979 genocide can also share their suffering with the court as “civil parties” entitled to “collective and moral reparations”.

“You have two camps, those who say justice can magically heal and others who say there is a risk of re-traumatization, which requires extraordinary measures be taken to protect victims [during proceedings],” said Jeffrey Sonis, a medical researcher from the University of North Carolina in Chapel Hill, who has specialized in the psychosocial consequences of human rights abuses, and mechanisms to promote justice following conflict.

With support from the US National Institutes of Health, Sonis interviewed 1,800 people in all 24 of Cambodia’s provinces in 2009 and again in 2010, before and after Duch’s trial, to learn whether and how the trial affected survivors’ mental health.

While unable to discuss his findings before publication, he said they fell between the two extreme views of how justice-seeking mechanisms may affect health.

In earlier research published in 2009, Sonis found that although most of the 1,000 Cambodians he interviewed hoped the trials would promote justice, 87 percent of those older than 35 believed the trials would bring back painful memories.

“The trial is a double-edged sword,” said Sotheara Chhim, a psychiatrist and executive director of one of the few local NGOs devoted to mental health,Transcultural Psychosocial Organization (TPO), and an expert witness called before this tribunal for mental health matters.

A couple on a motorcycle ride past the Toul Sleng Genocide Museum in Phnom Penh, Cambodia, March 13, 2005. According to government sources about 500 people a day visit the museum where an estimated 14,000 people were tortured and later executed. The bui 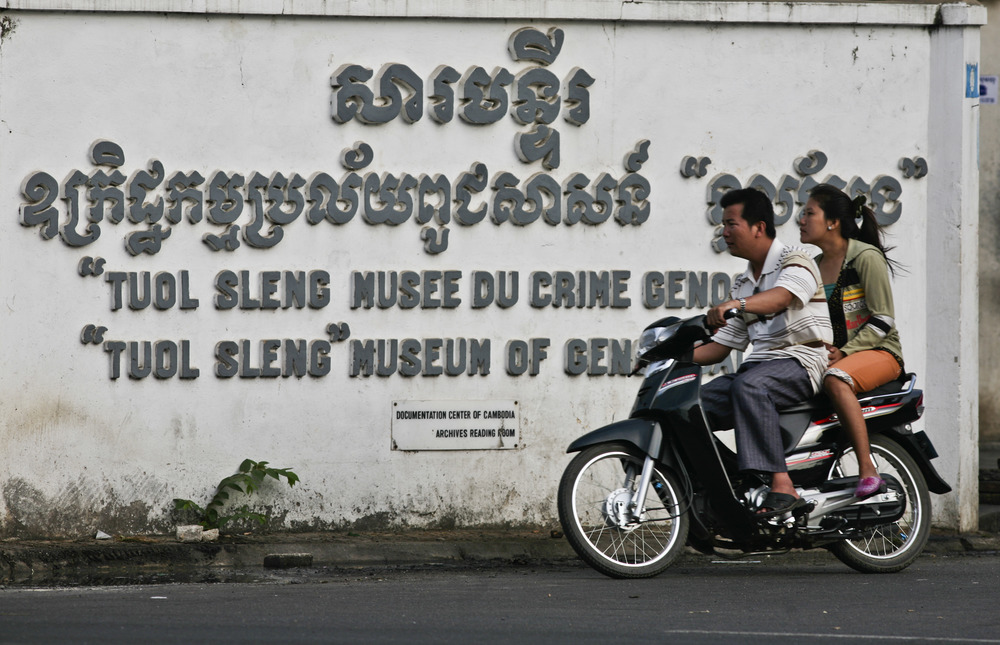 A human skull is viewed by a Cambodian High School student at the Toul Sleng Genocide Museum in Phnom Penh, Cambodia, March 13, 2005. According to government sources about 500 people a day visit the museum where an estimated 14,000 people were tortured a 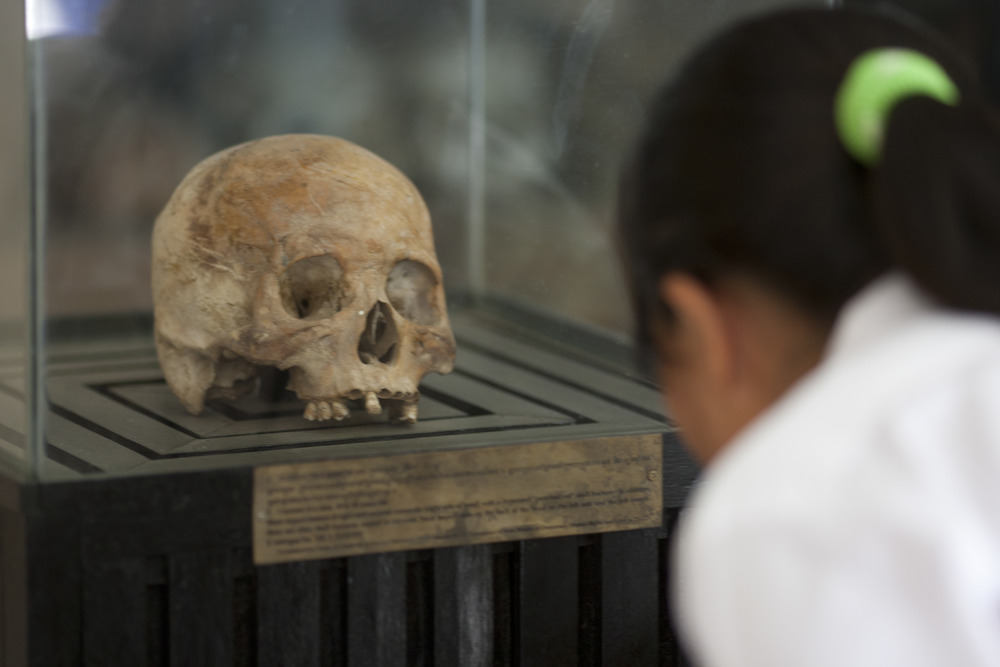 Yi Sophy, a school teacher from Kampong Cham, Cambodia, points out Khmer Rouge atrocities to her students during a tour of Toul Sleng Genocide Museum in Phnom Penh, March 2009 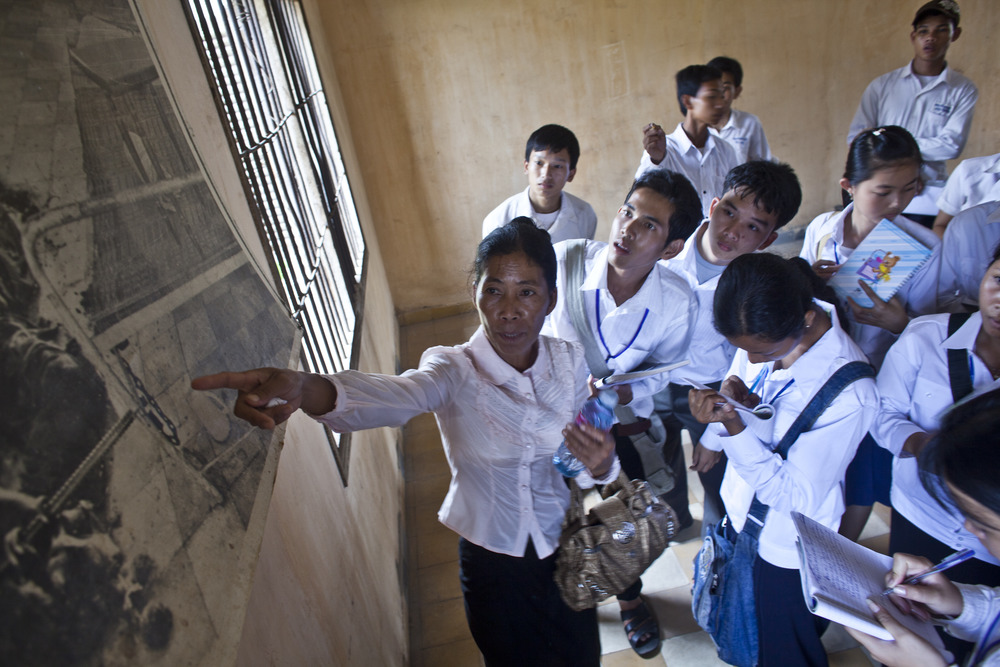 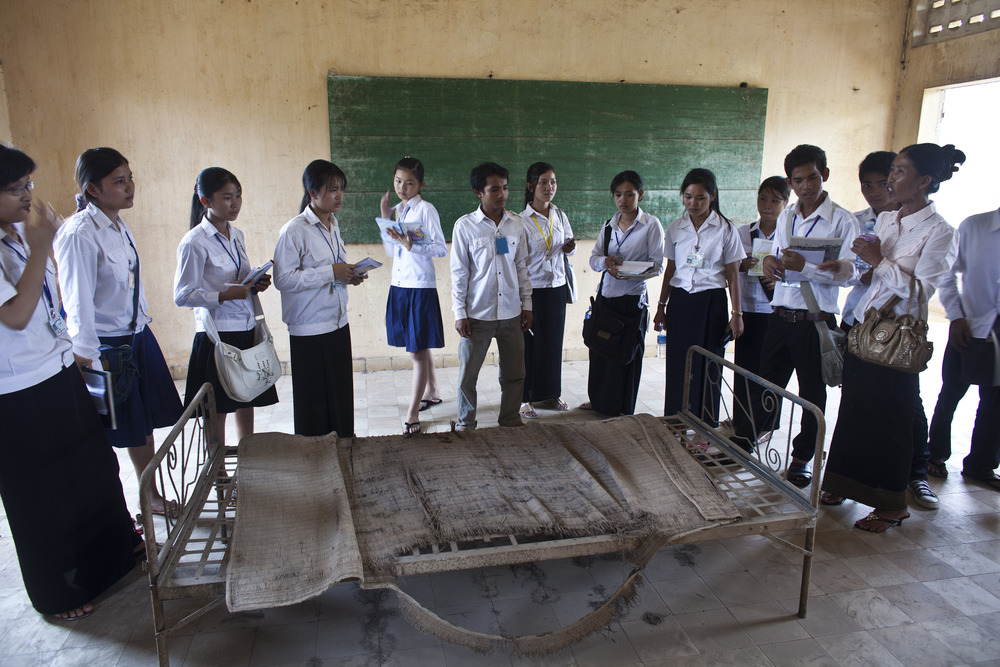 “It may be both catharsis and re-traumatization.”

When survivors retell their stories, listen to others as well as lawyers for the former Khmer Rouge senior cadre, painful memories and emotions may resurface, said Sotheara. But this “dark period” should not last long, he added.

“But after that, I think they found that the process of testifying had a therapeutic effect. A lot said [that] after testifying, they became relaxed like they [had] let go of a heavy load [they had carried] for a long time.”

The “bad feelings” can come back, said Sotheara, for example, when an undesired verdict is pronounced, but this is “the normal path in the process toward justice, which is not easy and [can be] a bumpy road”.

One out of four people who participated in Duch’s first trial reported “quite a bit” or “very much” negativity, such as disappointment and anger, following the announcement of the first verdict, according to a study published in 2010 by the Berlin Centre for the Treatment of Torture Victims, in collaboration with TPO.

On 26 July 2010, judges sentenced Duch to 35 years’ imprisonment for crimes against humanity, minus five years for the time he was illegally jailed by the Cambodian military court. Because he had already served 11 years in detention, he would have had less than 19 years to serve of his sentence.

The verdict also rejected 24 survivors’ applications to be included as civil parties, due to a lack of evidence proving they were affected by the crime.

After recognizing a photo of her uncle during a 2008 visit to Tuol Sleng, where she said he had been detained and executed, Hong Savath, 47, tried to join the case against Duch.

But in rejecting her application, judges said “neither this photograph nor any documentary evidence was provided as proof of her uncle’s detention at S-21 [Tuol Sleng]. Party [Hong], who was 11 years of age when her uncle disappeared, has also not provided evidence of any special bonds of affection or dependency in relation to her uncle.”

Her international lawyer*, whose work is funded by the German government, appealed with a Cambodian colleague.

Gang-raped by the Khmer Rouge – her oldest son is now 31 – and forced to witness her parents killed by bayonet, Hong fell into depression after the July 2010 verdict. “I felt surprised and sorrow I was not selected,” she told IRIN.

Days before the 3 February court appeal verdict announcement, Hong said she feared the worst of her depression would return in the courtroom. “I am worried Duch will deny his guilt. I am afraid I will lose control. I do not know if I can bear the intense emotion.”

On appeal, the court accepted her application to be a civil party.

When asked why she risked rejection and depression repeatedly to join the cases against the Khmer Rouge, she told IRIN: “I am the only survivor in my family and want to show this suffering to the world, especially the UN.”

Those sharing this conviction may be plentiful, but relatively few of the genocide survivors who are still alive are participating, noted a recent publication by the local Documentation Centre of Cambodia (DC-CAM) on trauma psychology.

Nyrola Ung, 58, lost more than 100 family members who died during the Khmer Rouge’s purges in the country’s eastern province, Battambang, near Thailand’s border. Escaping with her 1 and a half year old daughter and three-year-old son, Ung crossed in 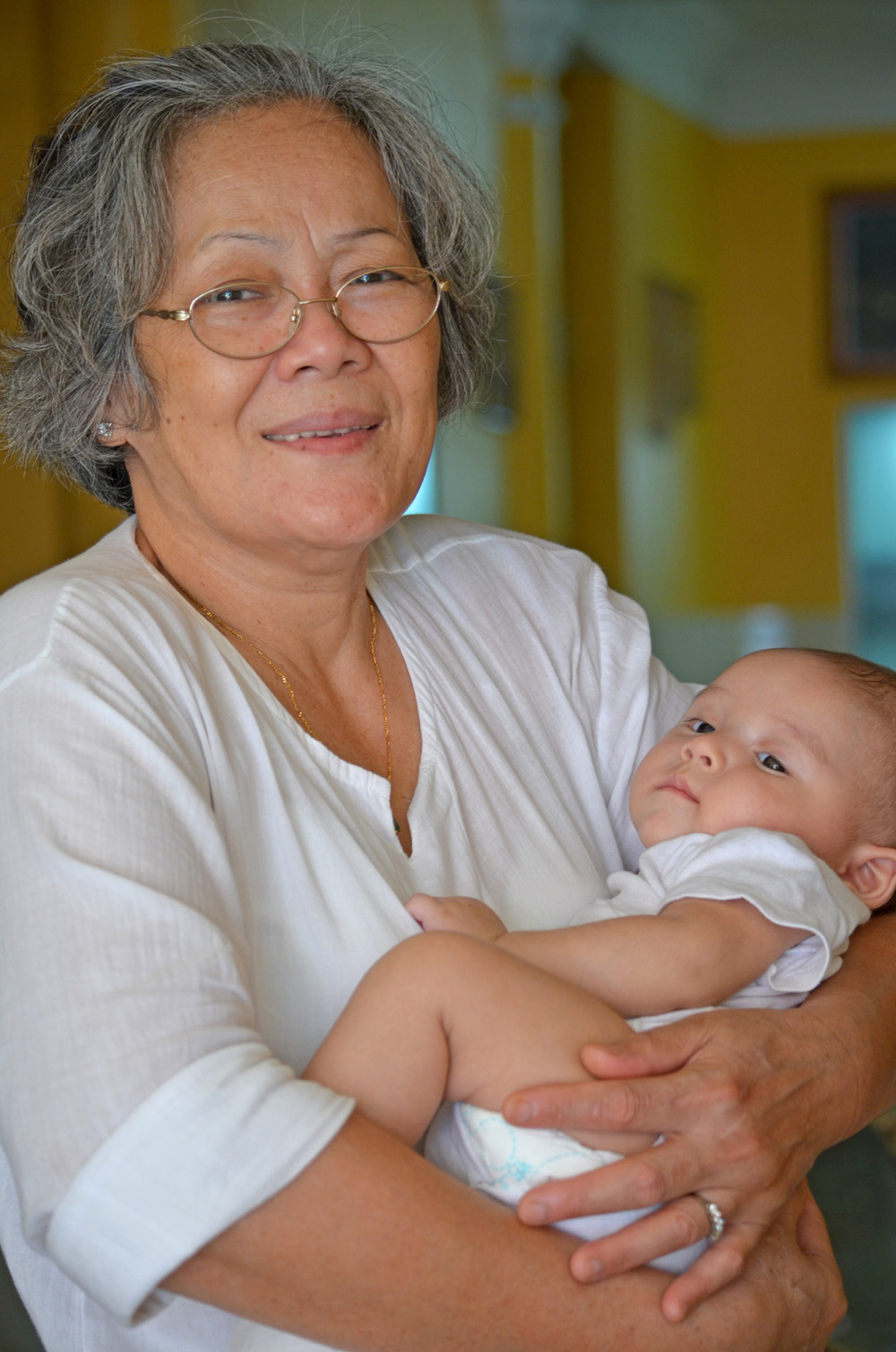 “What can the court really do for us?” said Nyrola Ung, 58, who chose not to participate.

She lost her husband and more than 100 other family members. After escaping to neighbouring Thailand in 1980, and then seeking asylum in the US, she returned to Cambodia last year in an attempt to visit the location where she escaped death and to confront her loss.

Sareth Mon, 58, also based in the capital, said she did not have time. A mother of two at the time the Khmer Rouge took her husband away in 1979, she lost her one-month-old baby when she could not produce any more breast milk to keep her alive.

“It is good to have trials, but it seems like a long time ago. The trial can relieve suffering – some people lost their entire families. I know I have a right to tell my story to the court, but I cannot attend because I am busy raising a family.”

One of the first to submit a testimony to the court, Theary Seng, 40, withdrew as a civil party in late 2011, calling the trials “a political farce” that risked raising expectations and harming an already, as she put it, “cynical public”.

A US-trained lawyer trying to set up a civic education NGO in Cambodia, Seng was orphaned at eight when her mother was killed in Svay Rieng Province bordering Vietnam.

For “collective and moral reparations” (because court rules do not allow individual financial reparations*), the court had granted part of survivors’ requests to compile and distribute Duch’s apologies and “statements of remorse”, while it rejected requests to publish the names of civil parties on the court's web page, a state apology, construction of memorials, free healthcare, preservation of former torture sites or a national commemoration day, stating that civil party lawyers had provided insufficient details, and the requests fell outside the court’s jurisdiction and were unenforceable because of Duch's  inability to cover costs.

This decision was upheld on 3 February, as judges explained how the court as a “unique system” cannot grant anything that requires government input.

But even without reparations, eight out of 10 Cambodians surveyed nationwide in 2008 and again in 2010 by the law school at University of California Berkeley said it was important to know the truth and that national reconciliation was impossible without more information gleaned from the trials.

And while it hurts to listen to testimonies and see history rehashed in the media, graduate management student at Pannasastra University, Thach Chanbanha*, 27, said: “If I had to choose between the pain of knowing and no pain from not knowing, I would choose pain.”

*This is an edited version from the original posted on 3 February, which includes legal clarification and the university student's correct identity