An elderly woman sits under one of the few scrawny trees in a parched landscape as she and 8,000 other displaced people wait for aid workers to begin handing out some 100 tonnes of flour, salt, sugar, and cooking oil.

The woman’s name is Hawa Brahim and the displaced site is Koloma, near the town of Goz Beida in Chad’s southwest.

Brahim tells IRIN she has no idea how the food arrived here. "They bring it; we eat it," she says.

“All I know is that back in my hut I have 10 hungry mouths that need feeding,” she said.

More than 50,000 tonnes of international food aid finds its way to this remote region each year to feed hundreds of thousands of Sudanese refugees and displaced Chadians. But how does it get there?

The process starts by identifying the need then designing a food aid package, requesting donations, purchasing the food, transporting it, assessing its impact, reporting back to donors and doing it all over again.

At each stage there are complications, Moumini Ouedraogo, WFP deputy country director in Chad told IRIN. "People don't understand how it works, not even our partners," he said.

Displaced women at Koloma in southeastern Chad gathering to receive food aid for their families. 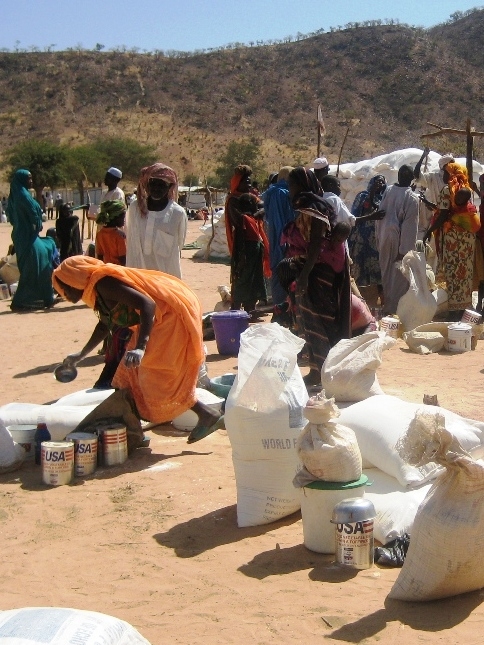 "[They think it is as if] you are walking into a shop and buying a few cans [but] it’s not like that at all,” he said. “It's a very long process."

The time it takes between when a donor decides to donate food and the moment the recipient receives it can take more than one year.

The cooking oil Hawa Brahim is about to receive in Koloma started life more than 15 months earlier, when Food for Peace director of the US Agency for International Development (USAID) Jeffrey Borns sat in his office in Washington DC and signed Order # 81707503 for a total of 925 tonnes of the oil.

About a month later, the US Department of Agriculture tendered a bid to fill the order.

It was eventually filled by a supplier in Chicago who had to repackage the oil in specially marked silver cans with the word "USA" written on them.

Meanwhile USAID made a separate tender for transport companies. 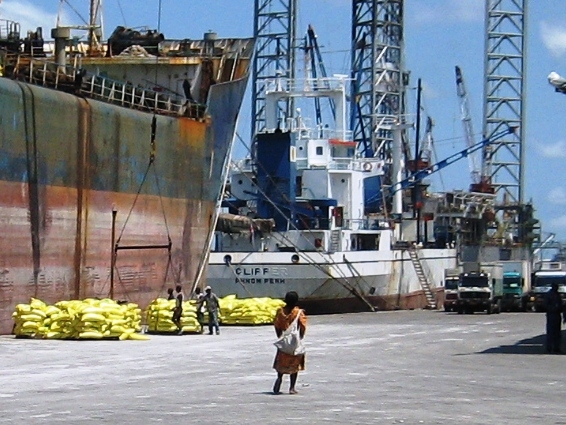 left the USA, passing from Chicago through three transit points before arriving at the port in Norfolk, Virginia, where it was loaded into two giant container ships.

The first port of call was Algeciras, Spain, where the cooking oil was unloaded and reloaded onto two smaller vessels.

But it was now sitting in the port of Douala in Cameroon, whereas the old woman was sitting under her tree in eastern Chad, some 2,235km away.

It would take another 11 months before the oil reached her.

On a Saturday afternoon in the World Food Programme (WFP) office in Chad’s capital, N’djamena, cigarette butts were collecting in a cup on the desk of WFP’s head of logistics as he tried to figure out how to get various food aid shipments from Douala to what is pretty well the continent’s dead centre.

Railway line from Douala to Ngaoundéré. 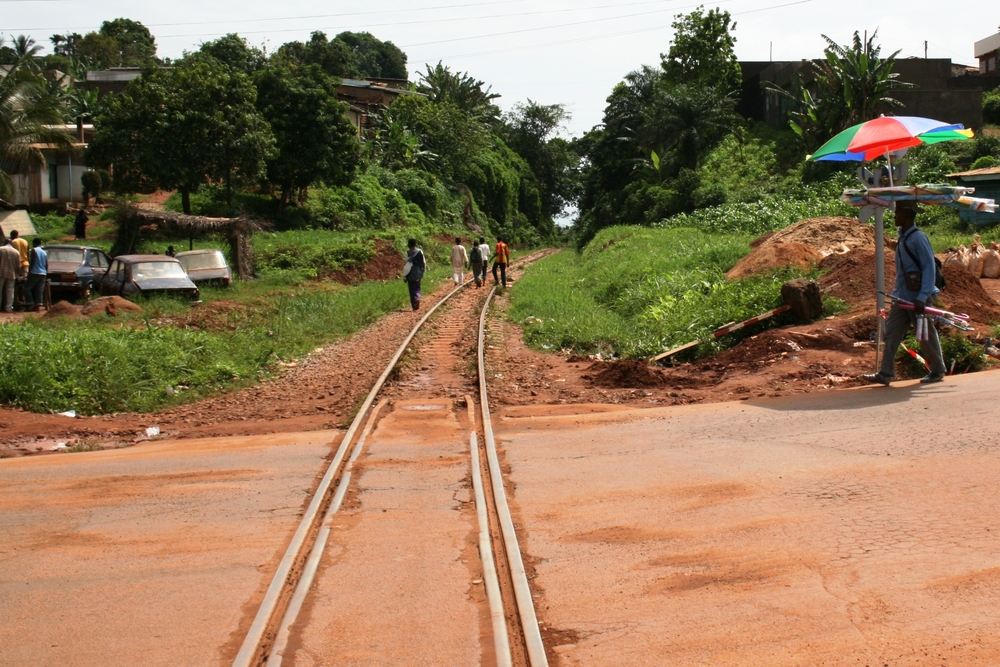 The many problems the logistician, Henrik Hansen, faces could be summed up in two words: “Transport capacity", he said.

Cameroon has a railway on which WFP moves food aid north towards Chad but it is painfully slow and inefficient and only goes 930km as far as town of Ngaoundéré.

The time it took for Order # 81707503 to be cleared from the port, loaded on to railway carriages and fitfully moved up to Ngaoundéré in two separate batches was roughly a month.

In theory Hansen said he knew of some 6,000 trucks that could make the road trip but most of them were falling apart and the rest were hard to get hold of as WFP had to compete for them with various commercial enterprises and other aid agencies.

The trucks were sometimes hijacked or drivers got nervous and would decide to turn back, he said. There were constant mechanical breakdowns, last minute cancellations and troubles with local authorities.

Order # 81707503 left Ngaoundéré in two truck convoys passing into Chad then continuing a further 900km to the town of Abéché, the humanitarian hub in the east. The first convoy took three weeks; the second took almost a month and a half. 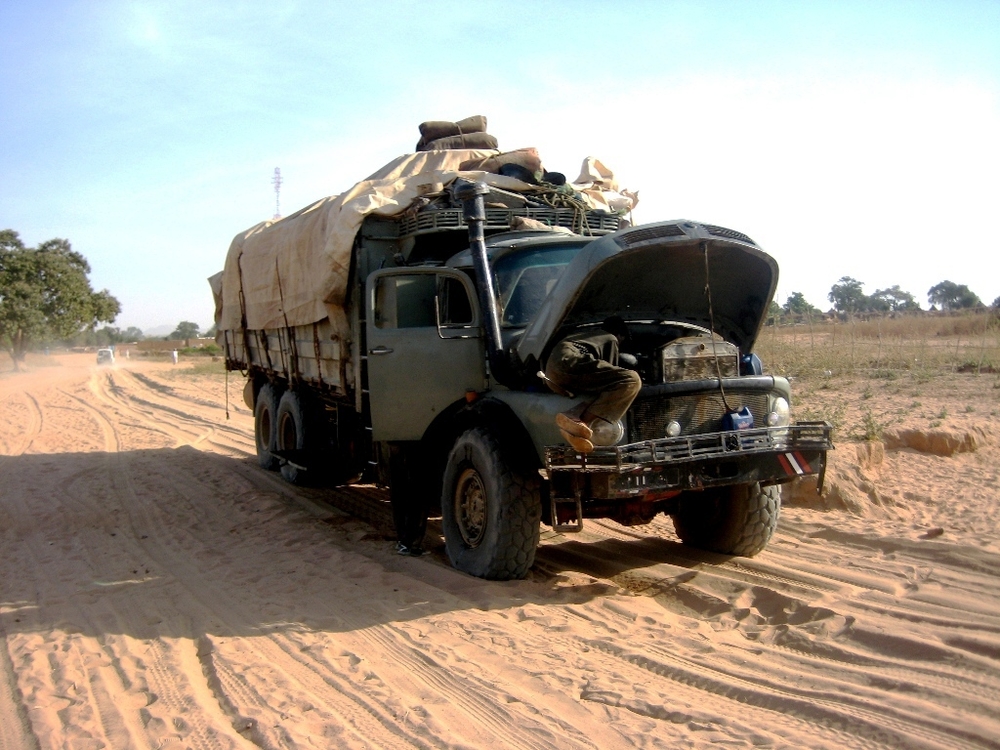 Once in Abeche the order was stored in WFP’s central depots then divided up ready for delivery to various warehouses across eastern Chad that service the numerous sites where refugees and displaced people reside.

The part of Order # 81707503 that was to go to the old woman in Koloma arrived at a WFP warehouse just 185km away but there it stopped. It was June, the rainy season, when `wadis', or riverbeds, which are normally dry, suddenly fill with water and make almost all roads in the area impassable.

WFP pre-positions food in villages and refugee camps to ensure that people have enough to eat even when no food aid can get through. But Order # 81707503 did not make it in time.

It was a full six months later that the order arrived by truck at a warehouse in Goz Beida less than 4 km from Koloma. It had been 15 months since Order # 81707503 was signed in that office in Washington DC.

Koloma, a site for displaced people near Goz Beida. 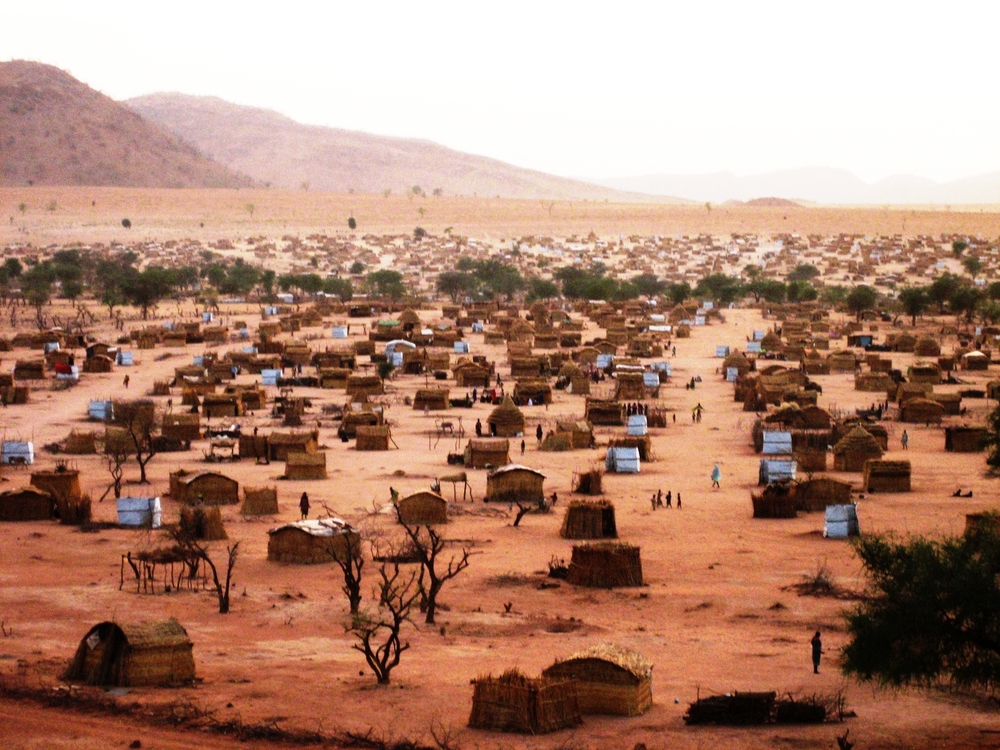 Two days before the delivery arrived at Koloma, aid officials called a meeting with 25 chiefs from the various displaced sites nearby.

They explained to the chiefs exactly when the deliveries would arrive at each site and what quantities would be apportioned. The point the officials wanted to drive home was that food aid would only go to displaced people who were registered.

During previous food distributions people who had not registered were angry that they did not receive food. “Many were not really displaced,” agency officials explained. "Vacant homes [in sites for displaced] would suddenly be occupied just before the distribution was to take place," the official, who did not want to be named, told IRIN.

Those people had threatened to attack aid workers during the next food distribution and now aid officials wanted the chiefs to give their assurances that this would not happen.

The truck arrived at Koloma at 8.30am. Hundreds of people were lining up calmly with registration cards in hand.

They waited over an hour as men unloaded the contents of the truck, including the oil from Order # 81707503.

As the distribution begins the old woman, Hawa Brahim, also falls in line. Her turn comes but she looks at her rations then looks at the aid workers.

"This is really not enough," she says.