Rolling through the Indian Ocean at nearly 805 km an hour, the tsunami that originated in Southeast Asian waters had retained much of its destructive energy by the time it hit Africa, wiping out entire villages along the Somali coastline.

Abdigani Karshe was walking along the sand dunes of a small village named Kulub, just outside the coastal town of Garacad, more than 200 km from Geroowe, the capital of the semi-autonomous region of Puntland, in the Mudug area of central Somalia.

It was just nearing noon on an average day for his Global Fishing Company, which exports 15 mt of fish per season to the port city of Dubai in the Persian Gulf. "One of my workers was yelling at me from the water - waving his hands about some waves," Karshe said. "Suddenly there were three men running from the sea and another 20 seconds [later], there was a huge wave coming fast. It was coming fast at me - already at my feet, even though I was on the sand hill."

The wave, Karshe told IRIN in Garacad, rolled over his head and washed him, and all the others who were on the beach that day, nearly 30 mt up the beachline. Garbage and debris from the fishing community's equipment swirled around him in the water.

A couple of minutes later, he was on his feet again. "After the water went back, I saw people going back to collect lobsters and fish, which were flapping around on the exposed beachline," he said. "I saw exposed fishes on the sand. Minutes later the water began to come back and everyone started to run again [away from the beach]." Eventually, as the water receded, Karshe started organising his workers to collect whatever was still salvageable.

The waves, local officials told IRIN, came at four distinct intervals, splashing water up to three km inland. Two people who were on the beach were crushed to death.

Garacad is a major fishing industry centre. Ships from the Red Sea, Gulf of Aden, Persian Gulf and Indian Ocean trawl the waters off its coast, collecting seafood for markets in the Middle East and Africa.

The shipowners often draw up contracts with local officials, clan elders or regional warlords. Many of the vessels, regardless of national origin, disregard international maritime laws since Somalia has no centralised government to monitor and regulate the industry properly, local sources told IRIN. Karshe lived abroad for several years before returning to Garacad.

Now he helps support his family through his fishing business. Not nearly everyone was fortunate as he. While there were no accurate figures for the missing in either Kulub or Garacad, local sources told IRIN six people in Garacad, including children, lost their lives to the 26 December incident. The tsunami damaged 15 businesses in the town which employed nearly 3,400 people.

The deputy minister for health of the new Somali transitional government and the chairman of the Joint Emergency Disaster and Management Committee, Osman Dufle, appealed to the international community to aid the tsunami-affected people. He spoke during an assessment mission to the northern and southern coasts from 14 to 17 January.

"Our people have been through four years of drought and now the tsunami," he added. "There are no medical facilities or means of emergency care in most of these areas."

[Somalia] Residents of Garacad looking at the washed away beach where their houses used to be before the tsunami. 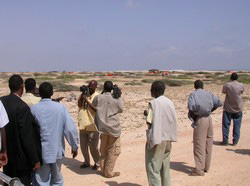 IRIN
Residents of Garacad looking at the washed away beach where their houses used to be before the tsunami.

The assessment team visited Hafun Peninsula in Puntland, Garacad and areas south of Mogadishu. Energy minister, Mohamed Bakar, who led the mission to Garacad, said at a meeting with the Mudug governor and other officials and elders, that the new Somali government was keen to assist the people of Somalia in every way possible.

"The people of Garacad need immediate assistance," Bakar said. "There is an immediate need for clean water, sanitation, toilets, food and shelter materials." Bakar, after traveling nearly 15 hours overland on rough terrain from Geroowe, the capital of Puntland, listened as elders and local business leaders spoke of the devastation and difficulty in trying to pick up the pieces of the shattered community. "The children are suffering," one local elder said.

"Our way of life was changed within hours. What do we do when we have nothing? How can we survive when our boats have been wiped out, our living [shelters] damaged?" Bakar toured Garacad and then Kulub, where Karshe lost more than US $32,000 in equipment for his fishing business. The losses included a pick-up truck, which was rolled over and over by the waves.

According to locals, it took some time before supplies arrived.

Several UN agencies such as the WFP, UNICEF and WHO and NGOs eventually brought in aid. However, it was extremely difficult to access the Somali coastline. Relief workers said it took their teams some time to get to people in areas like Garacad and Kulub, bringing medical, food and sheltering supplies by land quickly. WFP, which was one of the first to get aid to those affected, transported food by road from the Gulf of Aden port town of Bosasso to Hafun. Laura Melo, WFP spokesperson told IRIN that the road was in "very bad shape", making the journey to the affected area slow.

"It takes quite a lot," Dufle said. "Responding to emergencies such as these, especially given the conditions of our country, can be an incredible task." According to the assessment report, "the mission observed that the population was totally traumatised and a good number are in shock".

Health-associated conditions ranged from acute respiratory infections to diarrhea and eyesores, which are all aggravated by a lack of health services, the report continued. Families living along the coastline lost boats, equipment, housing, cooking utensils, foodstuff, clothes and sleeping materials.

The report estimated that relief aid would be needed for another six months. In Hafun Peninsula, which was most affected, an estimated four thousand displaced people will have to relocate from where they used to live because the massive waves altered the coastline. Their homes, which were formerly protected from the high tide by large sand dunes, were swept away by the tsunami. Nearly three weeks after the tsunami hit the region, the residents of Hafun were still living on higher ground about one km above the beachline, many sheltering under plastic sheeting provided by aid workers or in huts made from tree branches. "Their homes were by the shore," Bob McCarthy, UNICEF Somalia Emergency Officer told IRIN.

"They will now have to rebuild inland." The same was true of Garacad. Most of the population were living up to three km inland, not wanting to return closer to the sea for fear of another ocean torrent, which they believe was brought on by the will of Allah for their sins.