There are only two AIDS testing centres in the whole of Guinea and only one pilot project supplying anti-retroviral drugs to a group of 50 people.

Aid workers and medical staff say the disease is spreading out of control in the country's remote southeast, where a massive influx of refugees from neighbouring Liberia has complicated the situation.

"In Guinea, we are at the early stage of the fight against the virus," said doctor Aissatou Dieng, who works for the German cooperation agency GTZ in the capital Conakry. "And we're swamped by a flood of demands for help."

GTZ currently runs a pilot programme that offers 50 people living with AIDS free anti-retroviral therapy to improve the quality of their life and prolong their survival. But the money for this will run out after 12 months and a second scheme funded by UNAIDS to treat 286 people with ARVs has yet to be given a start date.

The only testing facilities for HIV/AIDS in this country of 8.5 million people are at the university teaching hospital in Conakry and a clinic in Mamou, a town further east.

Doctors up-country told IRIN they simply diagnose the illness by observing the opportunistic infections that characteristically accompany its development as the patient's immune system breaks down. These include tuberculosis, diarrhoea and persistent fever. According to a Ministry of Health survey conducted by questionnaire in 2002, 2.8 percent of Guinea's population is infected with the HIV virus.

In the main towns of the Forest Region of southeastern Guinea, where an influx of Liberian refugees has resulted in flourishing promiscuity and prostitution, the HIV prevalence rate registered by the same survey was seven percent. But many health workers reckon that probably underestimates the true situation in a region where AIDS counselling and treatment is non-existent, few people use condoms and where AIDS awareness programmes have hitherto targeted Liberian refugees, but not the local population.

"Because very little has been done in the region, we think that the prevalence rate is easily more than seven percent, and much higher here than anywhere else in the country," said Doctor Amidou Haidara Cherif, the director of the government hospital in Kissidougou, a town near the southern frontier with Sierra Leone and Liberia.

Haidara told IRIN that in 2002, 126 HIV positive people from the nearby villages were admitted to the hospital, but none of them knew they were carriers of the virus that eventually causes AIDS.

Even more seriously, the hospital staff felt unable to tell these patients about their true condition.

"We have no treatment to give them," he said. "It’s difficult to tell them that they are HIV positive because we have nothing to offer, not even counselling," Haidara said. "They become aggressive and violent (if you tell them) and they can commit suicide. It’s better to say nothing," he explained.

[Guinea] A Liberian woman - an urban refugee - who works as a prostitute in Conakry, Guinea. 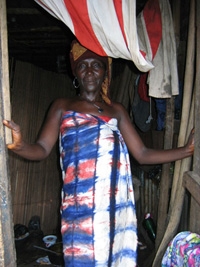 Haidara and his medical team have no means to test their patients' blood for HIV/AIDS. They simply make their diagnosis by observing the clinical symptoms exhibited by their patients in accordance with World Health Organisation (WHO) guidelines.

"It’s really a good way to know the status. But we cannot double check. We can only observe their general condition," Haidara said.

The doctors at Kissidougou are well aware that these people diagnosed as living with AIDS are likely to go back into the community and infect others, but they told IRIN there were legal as well as practical constraints to informing them about their condition.

Under Guinean law, people can only be told they are HIV positive if at the same time they are given counselling about their condition and how to stop themselves infecting others. But Kissidougou, like most towns in Guinea, has no trained and qualified AIDS counsellor.

"We are torn between saving lives, which implies that we will inform our patients, and respecting the rules, which means we must be silent," said Camara Sanoussy, a paediatrician at Kissidougou hospital.

He told IRIN that three percent of all children passing through his wards were HIV positive. In Nzerekore, the administrative capital and commercial hub of the Forest Region, the situation appears to be even more serious.

A US medical research team passing through the city told IRIN that about one third of the terminally ill-patients admitted to Nzerekore hospital last year were infected by HIV/AIDS. "The situation is dramatic, but nothing has been done to cope with HIV positive people or to prevent them from infecting others," said one of the researchers, who asked not to be named.

Refugees get the blame

Residents in this city of 500,000 people are well aware that AIDS is on the increase and many are quick to blame Liberian refugees with loose morals for bringing the disease into town.

"It’s the refugees' fault. AIDS comes with them!" said George, a waiter in a small restaurant Nzerekore.

"AIDS is their problem, not mine," he added aggressively, before turning his back.

Government officials told IRIN that 20,000 Liberian refugees were living in Nzerekore, where most had become petty traders, selling cigarettes and cola nuts or making bread-and-coffee breakfast snacks from small street stalls. They pointed out that poverty had forced many of the Liberian women and girls to resort to prostitution as a means of boosting their cash income. And within the refugee camps themselves, rape is common.

UN officials said privately that seven percent of all women in the four camps for Liberian refugees were raped last year.

“You know, people in Liberia are libertine, more free and Americanised than ours. There’s much more prostitution now than there used to be in the past," said Major Algassimou Barry, the prefect (senior government administrator) in Nzerekore and the surrounding district.

Since 1990, Guinea has hosted repeated inflows of refugees and returning Guinean migrants fleeing conflicts in Sierra Leone, Liberia and Cote d'Ivoire. According to figures from the UN refugee agency UNHCR, Guinea still hosts more than 130,000 refugees. The overwhelming majority are Liberians.

This remote part of Guinea has also had to accommodate up to 100,000 Guinean migrants to Cote d'Ivoire who were forced to return home when civil war broke out in Cote d'Ivoire nearly two years ago. And all these people have flooded into Guinea from countries where AIDS is rife.

"Beforehand, the prevalence rate among the Guinean population was very low," Barry the prefect of Nzerekore, said. "But following the arrival of thousands of impoverished people from Cote d’Ivoire and hoards more from Liberia, you can just imagine the impact."

Until now, efforts at controlling the spread of AIDS in the Forest Region have focussed on the refugee camps, where health workers have been conducting AIDS awareness campaigns and handing out free condoms for several years. The camps even have their own clinics for the treatment of sexually transmitted diseases.

Locals need to be focus

However, relief agencies have only recently begun to try and control the spread of AIDS amongst the Guinean host population.

The American Refugee Committee (ARC), a US non-governmental organisation, has been working on AIDS prevention in Nzerekore since the end of 2002.

Aid workers said it would shortly be joined by another US organisation, Family Health International (FHI). It is planning to set up two AIDS testing centres in the city and launch an AIDS awareness campaign aimed equally at local people and refugees, they added. 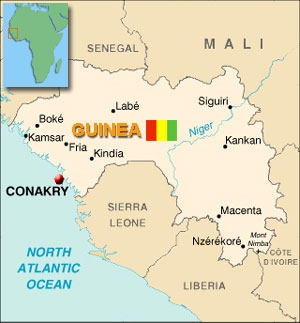 "Guinea is really late, well behind the times, in the matter of testing," said Mark Poubelle, the HIV/AIDS Programme Coordinator for ARC in Nzerekore.

"There are a lot of needs on the Guinean side, notably among the population affected by the conflicts," he added.

Poubelle recognised that until now, relief agencies had done quite a lot for the refugees, but not enough for the Guineans, even though the two communities intermingle closely. Bob, a teenage Liberian refugee in Laine camp with a baseball cap perched backwards on his head was happy to admit to sexual adventures with Guinean girls.

"We have a lot of sexual relationships between refugees and the host communities," he told IRIN.

"Sexuality is so common here, we start very early!" he added proudly. "What’s wrong with that?"

"There are a lot of places where girls go for prostitution," said his 14-year-old friend Eric, who had his first sexual encounter at the age of 12. Eric said he now frequently pays girls to have sex with him "because it’s so easy to have fun, it costs less than 2,000 Guinean Francs (80 US cents)."

Eric said he did not use a condom the first time he had sex, but added that he was now "very careful."

"We heard that we should be careful if we wanted to live enough longer to see Liberia in peace. It’s a good motivation!" he said.

ARC has trained some 45 ARC peer educators who work in three refugee camps and downtown Nzerekore, telling their friends and companions how AIDS is transmitted and distributing caps and tee-shirts to increase awareness of the disease.

The programme particularly targets youths in the 14 to 25 age group. Sylvester Sengita, the peer education manager in Laine refugee camp, said women and children were the most vulnerable to AIDS.

"Girls and women go outside to find something, because they need to eat African food, not only bulgur wheat (the most common cereal distributed by the UN World Food Programme ). They need to get cash, so they’re selling themselves," he said. "Each guy in the camp has two or three wives and early pregnancies are really common," Sengita added. He said that ARC's AIDS awareness campaign was starting to have an effect among the Liberian refugees.

"It is very hard to change behaviour, but in the camps this is starting to happen," Sengita said. "Nobody goes outside without a condom."

But he and his team said condom use among the local Guinean community was much lower. "

It’s very difficult to prevent the disease spreading if the host communities are not at the same level of information as the refugees," one Guinean peer educator told IRIN. "We need to expand into the local communities or we can stop right now," he added. "Imagine that a girl goes to a bar in Nzerekore, to spend the weekend there. If someone offers her 25,000 GF (US$10) per night without a condom, she will accept and we will have been working to no avail."