In the main square of Aksaray, a neighbourhood in Istanbul densely populated by refugees, Haroun Yamani tries to placate potential clients who are seeking a future in Europe but are anxious about the treacherous boat journey that will take them there.

The slight, chain-smoking refugee recruiter claims that unlike other smugglers who have been known to run away with payments, he is “a good man” who charges the steep price of $1,300 per person because “there are dangerous ways, and there are safer ones, which must be more expensive.”

The reality for would-be passengers from Syria, Iraq, Afghanistan and other conflict ridden and economically deprived countries is that they could well be paying for their own death. On Monday, as visiting German Chancellor Angela Merkel called for “swift results” in Turkey’s crackdown on the smugglers and Turkish Prime Minister Ahmet Davutoglu, in turn, appealed for greater NATO involvement, winter winds whipped up the Aegean, turning over two boats and claiming at least 33 more lives.

Following its recent and controversial deal with the European Union, Turkey has certainly beefed up its anti-smuggling campaign. Yamani’s operation has encountered additional police presence along the road from Istanbul and along the coast, but he assures clients that he has contacts on the inside, “who will inform us” of any need to circumvent checkpoints or pay bribes to security officials.

Yamani says the price is about half that demanded during summer months, when the waters are calmer and the likelihood of boat accidents and hypothermia are reduced. But he adds that the winter trips are “comfortable, not dangerous, God willing.”

If he knows it, he doesn’t mention that since the beginning of 2016, more than 360 people have died or gone missing trying to cross the Aegean, according to the International Organization for Migration. This was up from 82 recorded deaths during the same month last year.

Some 2.5 million Syrian refugees have crossed into Turkey since the war in Syria began, making it the largest host of Syrians in the world. The country is under increasing pressure from the EU to stem the flow of refugees and migrants who have departed from its shores in their hundreds of thousands to reach nearby Greek islands like Lesvos.

In a bid to fulfill its part of the $3.2-billion aid deal signed with the EU in November, Turkey has made efforts to tighten its borders, crack down on smuggling networks, and improve living conditions for Syrian refugees, in part by issuing work permits to those residents in the country for six months or more. 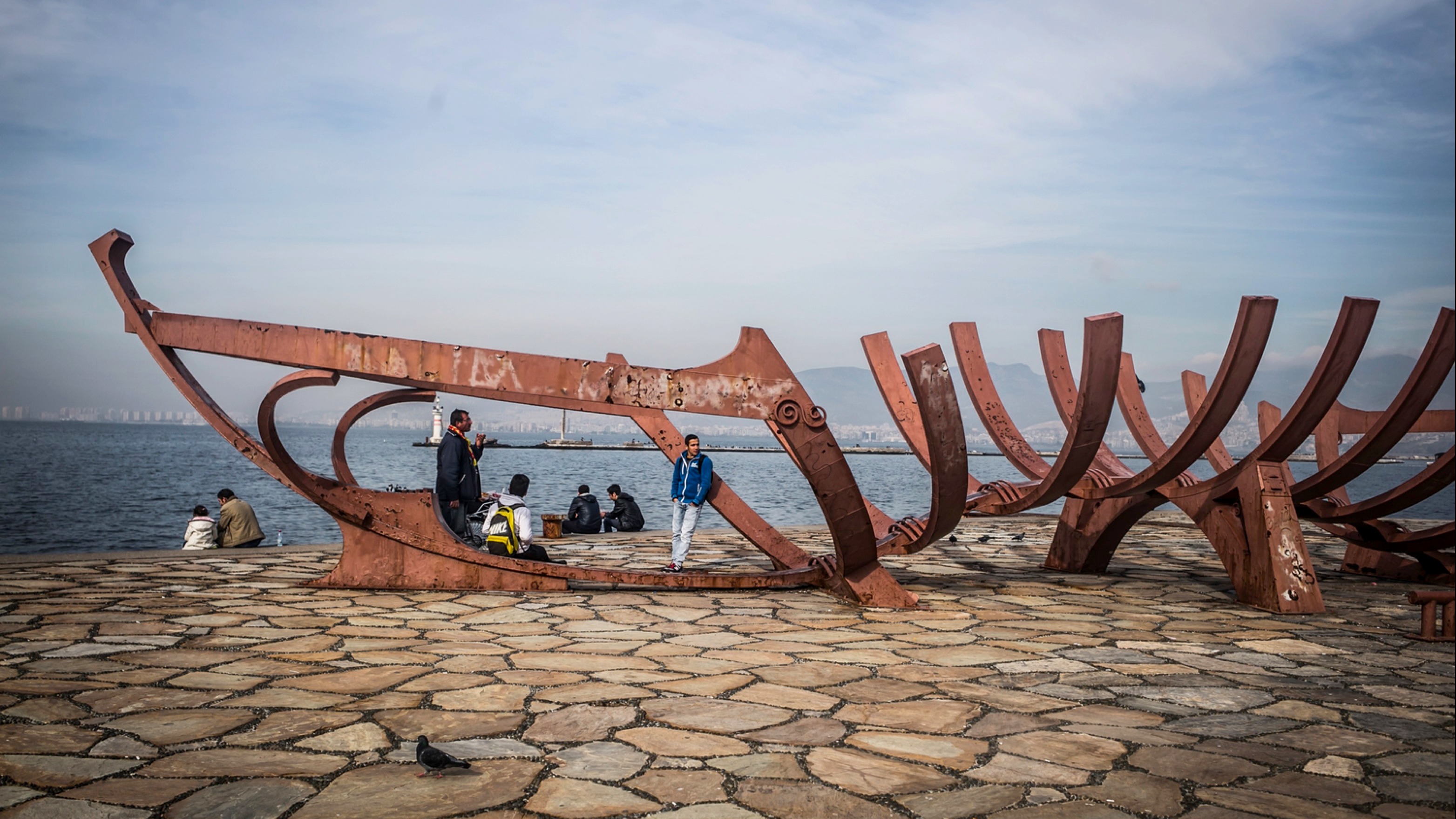 On 1 February, government spokesman Numan Kurtulmus told a cabinet meeting that Turkey has “decided to categorise smuggling as a terror crime, an organized crime, and enact legal amendments to that extent, including confiscation of assets used in smuggling.”

He added that a special police task force to prevent smuggling is in the works, and that a decree has been signed in order to strengthen coordination between the police, the coastguard, local governments, and other relevant institutions.

Such measures have made the headlines in Turkey, most recently on 6 February, when Turkish police raided three factories producing unlicensed and substandard inflatable boats used to smuggle migrants to Greece. In recent weeks, Turkey has also deployed additional gendarmerie troops along its Aegean coast.

But frequent beach sweeps in and around coastal cities are insufficient to catch all the groups. Smugglers have adapted by operating more furtively. They constantly change the hotels or locations in the woods where refugees linger before their departure, and simply wait for the coast to be clear – often in early morning – before giving the green light for the boarding of the boats.

Since the early 2000s, the Turkish government has appeared almost powerless to prevent people smuggling from ballooning into the multi-billion-dollar industry it is today.

Fulya Memisoglu, an assistant professor at Cukurova University who studies smuggling and trafficking networks in Turkey, said the transnational nature of the business presents a significant challenge. People smuggling involves “different countries and perpetrators who very easily adjust to the changing dynamics of migration flows,” she told IRIN.

According to the refugees, the facilitators are often of Syrian origin and present a “neat and clean” image upon which they build trust, Memisoglu said. But these characters are the just the presentable face of a broader network whose hidden leaders are hard to identify and who are cunning enough to constantly replace their underlings.

The facilitators are sometimes “saving money themselves to be smuggled through migrant smuggling, so they may no longer be in Turkey after a few weeks, or a few months,” explained Memisoglu.

Despite the icy waters and government pressures, demand for passage to Europe has only increased since last year, and the numbers of those arriving on European shores, as well as the death tolls, are only expected to continue rising.

The rise of social media

Unlike last year, when smugglers recruited out in the open in neighbourhoods popular with refugees, Yamani says most are now shifting recruitment off the streets and further into the depths of social media, amping up their advertising campaigns on an unknown number of groups on Facebook, WhatsApp, and Viber.

As well as boats, they advertise forged documents that can make registration easier once people get to Greece. Prices range from $50 for marriage certificates to $1,250 for passports.

A Facebook spokesperson said smuggling groups violate its community standards and are removed once the company is notified of their existence. However, it is impossible to keep up with the rapid pace of new and constantly changing groups conducted in languages that are often not understood by overseers in European or American offices.

“Facebook is very quick to take down pages that are working to smuggle people, but the trouble is that we’re seeing an extension of sketchy, well-disguised travel agents, exploiting the needs and the huge imperative for desperate people, who are of course using social media – Facebook, Google hangouts, you name it, whatever works,” IOM spokesman Leonard Doyle told IRIN.

A Syrian refugee buys lifejackets in the streets of Basmane 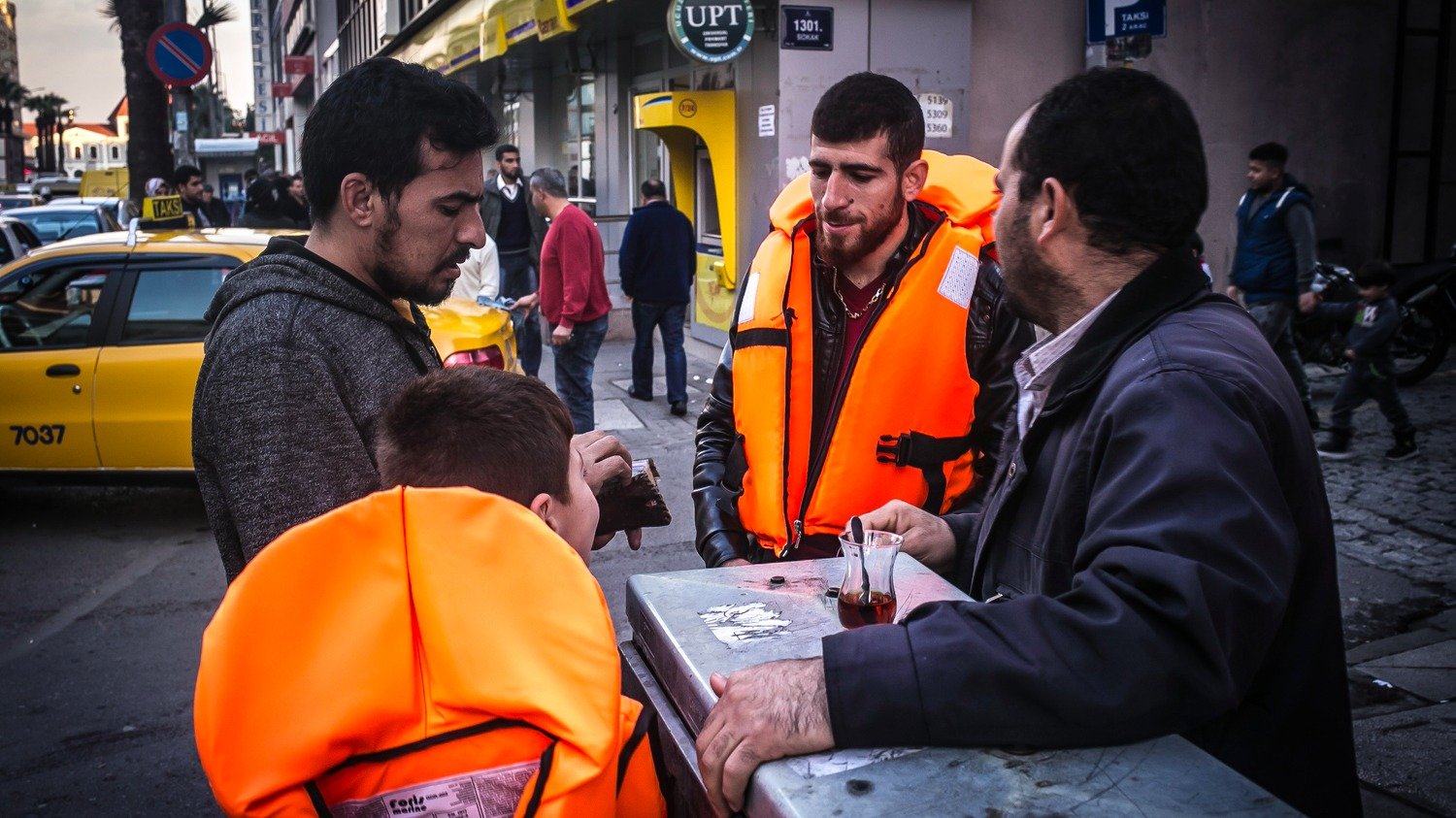 In groups such as the “Smugglers Market,” “Smugglers to Europe,” or “Trips from Turkey to Greece” catering to Syrians in Turkey and elsewhere, competitive winter rates have reached new lows, with smugglers charging as little as $500 per trip.

The prices have experts concerned that smugglers are taking even more shortcuts than before, sending refugees in lower quality boats and with more counterfeit, non-buoyant life vests that serve little purpose for the many refugees unable to swim.

Ismael, a refugee from Homs, who requested his last name not be used due to security concerns, is in the middle of a 12-hour shift selling one-Turkish-lira (30 cents) tea to provide for his wife and three children. Informal salaries like his are not enough, and he dips into his savings to cover soaring rent and food prices.

He sees private minibuses full of refugees departing daily, even during snowstorms, from his neighbourhood of Aksaray, and says his countrymen have “seen so much war and destruction, it’s worth it to take one more risk in order to get to a better place.”

While refugees risk the boat journey to Greece to escape the “exploitation” that is rampant in Turkish cities like Istanbul, “the smugglers live very happily,” Ismael says. “They can make $20,000 per month during a busy month. They have everything: a home, cars, all the possibilities – whereas the rest of us have little.”

Young men like 29-year-old Mohamad Moussa say they can’t wait any longer to start their lives.

“When I came to Turkey, I received nothing in terms of human rights,” said Moussa, who paid smugglers $600 to ferry him across the sea to Greece last month, and is now continuing onwards with the goal of reaching Germany.

The journey from Turkey’s coastal city of Izmir to the Greek island of Lesvos was cold and Moussa “felt the waves,” but he couldn’t wait for the arrival of spring, when prices would be out of reach.

“In Turkey, any place I worked, anything I did, I felt lost,” he said. “At least in Europe, I will have rights and I will have the chance to make some money to send back to my family still living in Syria.”