A peace deal signed last week in Qatar by warring tribes from the Saharan town of Ubari may bring some hope for displaced and marginalised people in Libya’s desert south, including those holed up in a partially-built construction project known locally as “the Chinese Camp”.

We reported in August on the desperate situation in Ubari, a town of more than 30,000 people where civilians had to be on constant alert for street clashes and sniper fire, and where the wounded often died of their injuries because of the lack of medical supplies and assistance.

See: In Libya’s desert south, a town fends for itself

The fighting is predominantly between militias from two indigenous Saharan tribes, the Tuareg and the Tebu, which have taken opposing sides as Libya has descended into a complex web of conflicts after the ousting of long-time ruler Muammar Gaddafi. The Tuareg are aligned with the Tripoli government, installed 16 months ago as a rival to the internationally recognised government in eastern Libya, which has the support of the Tebu.

Many of those fleeing the fighting have had little choice but to seek refuge more than 300 kilometres to the southwest in Ghat, a predominantly Tuareg town. Some 600 families now occupy half-built homes on the outskirts of Ghat in an unfinished housing project abandoned by a Chinese construction company at the start of the 2011 uprising.

While many were displaced by fighting between the Tuareg and the Tebu, there are also migrants from neighbouring countries. Children play with abandoned cars in the dust, rather than spend time inside squalid two-roomed houses, where windows are bricked up against the summer sand that blows in from the Sahara and the cold winter nights.

“We need urgent humanitarian aid here,” said Youssef Osman al-Hisham, the self-appointed coordinator of the Chinese Camp. “There are many families here who have absolutely nothing, especially divorced or widowed women with children.

“Last night I found one family with nothing to eat. The mother was boiling water on the stove to make her children think there was food. It was devastating to see,” he said. “I bought them a bag of macaroni, but I myself only have a little money and cannot help everyone.”

In recent months there had also been several outbreaks of fever and diarrhoea caused by unsanitary living conditions, Hisham said, adding that sick residents could not afford medical care and instead relied on home remedies.

The 14-month conflict in Ubari has blocked off the only road leading to Libya’s coastal cities, severing Ghat from food and fuel supplies. Since September 2014, goods have only been able to reach the town of more than 20,000 by land on small trucks and 4x4s that have to navigate hundreds of kilometres of desert terrain and a lawless stretch of Saharan highway.

Tribal leaders are returning to Ubari this week to meet military personnel from both sides and try to establish peace on the ground and reopen the road. If peace is achievable and sustainable, one of the greatest impacts will be on the Ubari families displaced by the fighting, and others living in temporary accommodation in Libya’s southwestern Sahara.

Sitting on grubby matting and watching a baby crawl around the concreted entrance to their makeshift home, 15-year-old Zieneb said she had no idea whether her father, who had been fighting in Ubari, was still alive. Since fleeing the town a year ago, she has shared the bleak accommodation with two widows from Ubari and five children – two of whom are orphans. As poorly educated single women, there are no work opportunities and the group relies on charity from other families to survive, she said.

At the "Chinese camp," an informal camp for IDPs and migrants on the outskirts of the southwest Liby 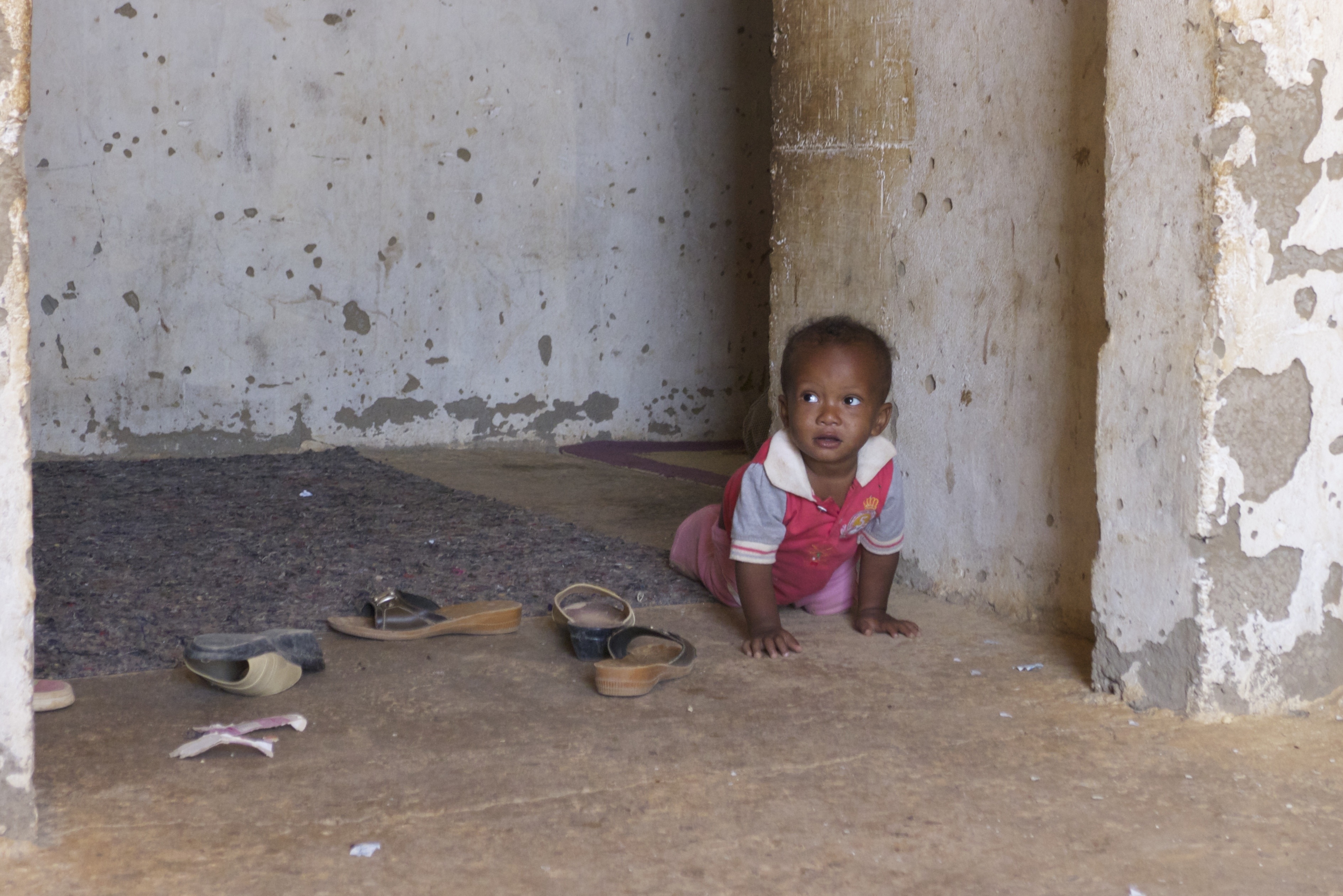 A nearby building has been home to 35-year-old Khadija and her four children for three years, since they fled Sebha – another southern town prone to fierce tribal conflict. “I am a widow and I have nothing: just two blankets and one mattress for all five of us,” she said, explaining that her husband had died after being injured fighting in Sebha. In the kitchen, where rats ran across the work surface, a tiny amount of rice boiled on the stove, the only meal her children would have that day. “I swear I will not eat tonight because there is not even enough for my children,” she told IRIN.

The camp is defined by its poverty. A makeshift mosque and madrasa stands roofless, and residents heave water from an underground tank in buckets. Only a few children in the camp, whose families can afford to pay for their bus fare into Ghat, attend school.

In a small store, shopkeeper Hassan Juma Tomas flicked through a tatty exercise book listing items sold on credit. “I give credit to the poorest families out of humanity, but people can never afford to pay and I’m not a bank,” he said.

Opportunities are limited in remote towns in Libya’s south and Tomas left Ubari in 2012 when he heard about the abandoned Chinese Camp. He saw it as his chance to move from the family home and become independent. “Since the war in Ubari started, more than 500 families caught in the fighting have come here,” he said. Although some found it too difficult to stay, preferring to return to war-torn homes, he estimated that around 300 Ubari families remained in the camp.

“We have received no help here: nothing from the council or government,” Hisham said. “We feel that no one knows or cares about our desperate situation.”

Gomani Mohamed Salah, the head of the local council, described Ghat as “a town under siege.” Even before this past year’s influx, long-term locals were already in dire need, facing severe shortages of food, medicines and petrol. Neither Libya’s rival governments nor international aid organisations were interested in helping and direct requests to the UN from the council had generated only empty promises, Salah said. The UN’s refugee agency, UNHCR, did not respond to IRIN’s questions about whether they were aware of the Chinese camp or had sent any aid.

“Here in Ghat, we are really suffering,” Salah said. “We need people to realise the impact of Ubari’s war here.”

As well as the families from Ubari, who are amongst an estimated 434,000 Libyans displaced by conflict across the country, local people say the Chinese Camp has also attracted migrants from neighbouring countries.

“Many of the families are from north Mali. Some were already here but during and after the revolution they kept coming,” said Ghat resident Mohamed Ahmed, sipping tea in the town’s only cafe.

With sporadic fighting breaking out since the peace deal was signed, uncertainty remains over whether it will hold. “We hope the results on the ground will be seen from next week,” said Laishi Othman, a participant in the dialogue that led to the deal. “But if a ceasefire proves impossible, we expect the fighting will be worse than before.”