Amongst the rubble of ruined Sana’a, the shutters of a once-proud orphanage hang loosely from their hinges. Huddling below smashed windows, a few dozen children, dirty-faced and hungry, wait for food.

Before the war, the orphanage - commonly referred to as just Dar al-Aytam - was known for turning Yemen’s orphans into soldiers, business leaders and politicians. Now, it struggles even to get by. Many children have fled the relentless bombing and run off to track down relatives. Those who stay get little food and even less education. It is becoming a sad relic, just another victim of the conflict.

Five months after a Saudi Arabian-led coalition began bombing in a bid to displace the Houthi rebels from power, Sana’a these days is a dusty, polluted place.

“The orphanage is near many of the army sites and the presidential house, so the airstrikes attacked these sites and scared the orphans,” explained Abdullah Obad al-Hindi, the institution’s head.

“[The orphans] have started screaming while sleeping and wetting themselves [and are suffering from] fear, tension, and worry,” he told IRIN.

About half of the 800 children who were living in the orphanage before the war have since fled. Hindi didn’t know where they were now. “Some have left for their relatives, but our concern is for those who don’t have relatives anywhere,” he said.

The orphanage is facing a crippling budget crisis. Even if it did have more funds, there is little it could do to improve the situation as a coalition naval blockade has choked off imports, including precious fuel, causing desperate shortages of even basic goods.

“The dining hall was under renovation but then the airstrikes began and the state couldn’t pay the [decorator]. So he could not complete his work and now the orphans have their food in the yard under the sun, in the polluted and dusty air,” Hindi said.

Because of the lack of funds and the blockade, there is no longer meat or fruit for the children, who have to make do with rice, potatoes and bread.

A fire at an orphanage in the Yemeni capital Sana'a 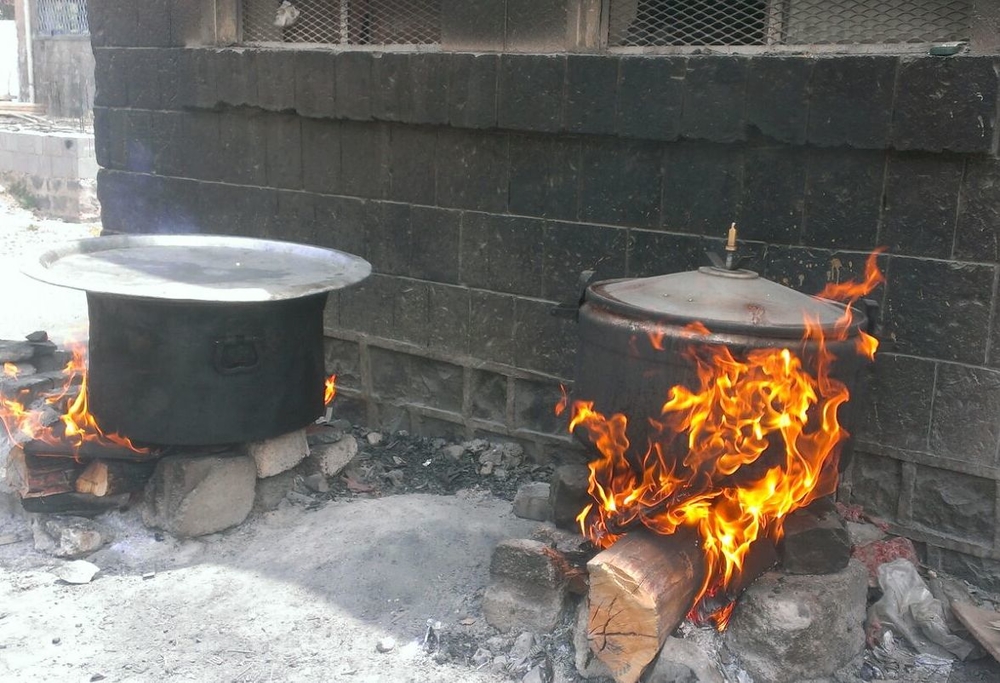 “[When I came] we had many things we are missing now,” said 18-year-old Abdulkareem Nouraddeen, who joined the orphanage at the age of 11.

Yemen’s war has taken a heavy toll on civilians, particularly on children. UNICEF estimates that more than 1,000 children have been killed or injured since the bombing campaign began. Ten million children – 80 percent of Yemenis under the age of 18 – are adjudged to be in urgent need of aid.

It wasn’t always like this for the orphanage. Built in 1925, it has produced a string of successful Yemenis.

Mohammed Abdullah al-Fadhli graduated from the orphanage in 1967. He is now general manager of the Education Office, part of the Ministry of Education in Sana’a.

“This orphanage was the house and the factory of men, and it was like a military college where most of the leaders and officials of the state graduated from,” Fadhli told IRIN, brimming with pride and nostalgia.

“Orphans were more serious in learning, the teachers were very serious in teaching,” he said. “But nowadays the teachers cannot teach and supervise properly due to the number of students.”

The demise of the orphanage is inextricably linked to Yemen’s overall decline, first through political turmoil, then conflict.

After over 30 years in power, President Ali Abdullah Saleh was overthrown in 2012 following popular protests. Hopes for a transition to peaceful democracy evaporated as the country descended into civil war.

Hindi fears that many of the young men who leave the orphanage will be sucked into the conflict and join the country’s warring militias.

Khalid Mohammed Jaber was not technically an orphan. His friend Ziad Ahmed told IRIN that his separated parents had dumped him on the orphanage’s steps. They wanted to take him in, but didn’t have the funds.

Eventually he left, trying to get in touch with his father to ask for a job. His father refused. Desperate, he joined the Houthi rebels. Jaber was killed last month, fighting in the central city of Marib.

As Yemen's war continues, it is certain to leave a new generation of orphans in its wake.