Few have heard of it. Even fewer know how it will work. But a newly launched body could revolutionise how Saudi Arabia gives hundreds of millions of dollars of emergency aid every year.

In 2014, the Gulf state was the world’s eighth largest humanitarian donor, spending more than $736 million. Yet its funding patterns have historically been highly unpredictable, hard to navigate, and – some argued – incoherent.

Six weeks ago, with little fanfare – just a few reports in the local media – Riyadh announced the creation of the King Salman Center for Humanitarian Aid (KSC), named after its new monarch.

If it succeeds, it will fundamentally reshape the way the country responds to crises around the world, leading to more coordinated and strategic aid delivery.

If it fails, it could become yet another bureaucratic monster or lead to aid being more politicised than ever.

The centre’s entrance on the scene could not come at a more difficult time: its first job is to administer the disbursement of a quarter-of-a-billion-dollar pledge to Yemen, where Saudi Arabia is actively engaged in the country’s civil war. Is the new centre biting off more than it can chew?

Much about the centre’s operations remain uncertain. As of yet, the full chain of command is unknown, and it doesn’t yet even have a website (though there is a rudimentary Facebook page ).

But the scale of ambition is crystal clear. A UN source said he expected it to operate as the Gulf State’s equivalent of USAID – the state aid agency of the United States – and that it would establish numerous departments including monitoring and evaluation and research arms.

KSC spokesman Rafaat Sabbagh confirmed the global goals: “We are very ambitious… We are only one month and a half old. But at the same time we are very keen to learn to learn from the experience of DFID [in the UK] and USAID.”

“Our work is not only for one country. Whenever there are people in need, especially with natural disasters, we will be there.”

Saudi Arabia is known for its lavish donations. In 2008, it gave $500 million to the World Food Programme in one go, while last year it donated the same amount for the response to the crisis in Iraq. Normally the aid has come with relatively few strings attached.

Such donations will now likely be channelled through the KSC, raising concern that Saudi Arabia might decrease its engagement with the UN-led international aid system.

The country has become increasingly exasperated with the UN in recent years. In late 2013, it rejected a seat on the UN Security Council, condemning “double standards” in Syria and wasteful use of resources.

In what appeared to be a barbed critique of the UN, Sabbagh said the centre aimed to “avoid the bureaucracy that some organisations are suffering from”, and would be “more flexible” than other aid bodies.

He stressed, however, that it wanted to work with the UN. “We are very keen to build a partnership [with the UN]. At the same time we have our own networks,” he said. “Our work through the UN partnership can be complimentary.”

Sabbagh told IRIN the KSC aims to end the country’s reputation as a “cash cow” in the humanitarian world.

The UN source said the kingdom may well seek to take a more hands-on approach to the projects it funds, channelling more spending through local Saudi organisations rather than through international bodies and UN-led coordinated appeals.

“The era of the Saudis just giving money and disappearing is over,” the source said.

Another concern is that the new centre becomes yet another body competing for power within the Saudi bureaucracy, which has long divided aid delivery between different organisations.

Historically, under the authority of the Ministry of Interior, a number of specific committees focused on individual crises; while the Saudi Fund for Development, which falls under the Ministry of Finance, has often strayed into humanitarian aid, for example in response to the Syria crisis. The Muslim World League and a number of smaller organisations have also competed for influence. 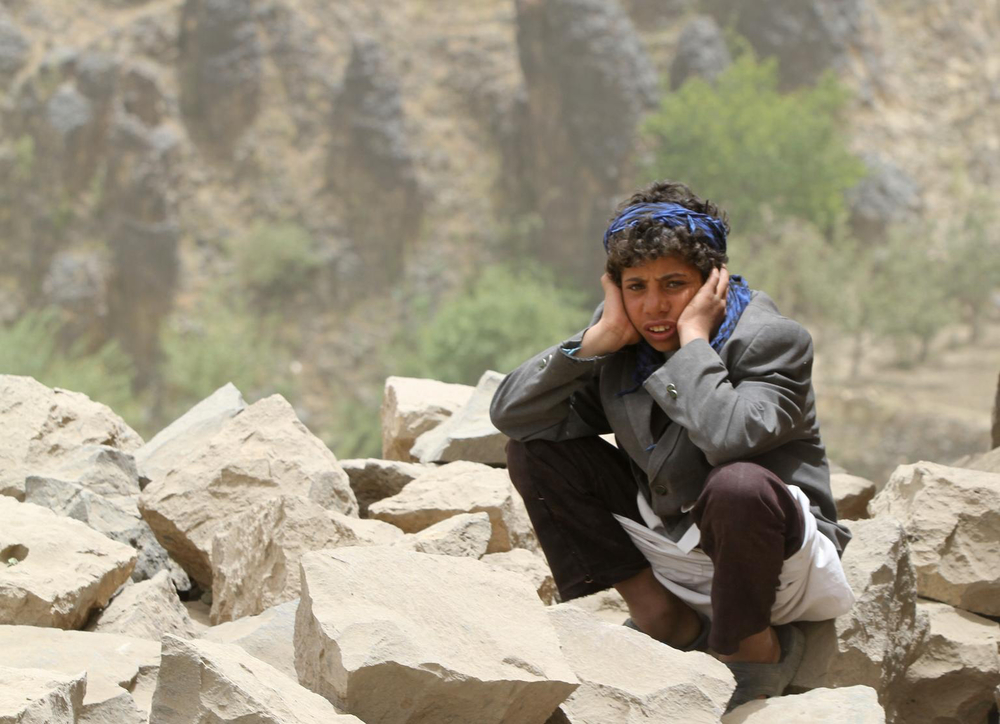 UNICEF
A young boy sits amid rubble all that remains of his home – which was destroyed in an air strike – in Okash Village, near Sana’a, the capital.

Gulf governance expert Habiba Hamid said that different bodies often overlap, interact and contradict each other. “There is a disconnect between different arms of the government, different agencies. This is true in other Gulf states as well, but in Saudi there is a great deal more activity. It is a more multifaceted game...

"In many cases, the right hand won’t know what the left is doing."

This has led to a waste of resources on a huge scale and a lack of proper coordination and monitoring, said Sultan Barakat, director of research at the Brookings Institution’s Doha Center.

“[The Saudis] have come to realise over the last few years a lot of their aid that was given in good faith to Syria ended up in the wrong hands. They are very conscious of that,” he said.

Saeed Hersi, head of the UN Office for the Coordination of Humanitarian Affairs in the Gulf, said he was confident the centre’s establishment would lead to better aid. “The challenge previously was that relief in Saudi Arabia was done by many [different organisations]. This will still be the case but now with the centre we have a centralised point of contact and reference,” he said.

But the centre’s first test case in Yemen, where Saudi Arabia began a bombing campaign and economic blockade in March in a bid to force Houthi rebels from power and reinstate the government-in-exile, is already proving difficult.

In April, when the UN appealed for $274 million to respond to the crisis in Yemen, the Saudi government pledged the full amount within 24 hours. Aid agencies expected the money to be delivered directly to the UN, as Saudi Arabia did last year when it unusually allocated its entire $500 million donation to Iraq to OCHA to coordinate disbursement.

But then in May, Saudi announced the centre's creation and said the Yemen donation would be coordinated by the KSC.

UNICEF tapped in quickly, launching a project with KSC funding for Yemeni refugees in Djibouti. But other UN bodies were in the dark for several weeks how much funding, if any at all, they would get.

After negotiations between the centre’s general supervisor Abdullah bin Abdulaziz Al-Rabeeah (a former Saudi Health Minister) and the UN’s humanitarian chief Stephen O’Brien, a deal was reached last week. The majority of funding was granted to the World Food Programme, with other UN agencies receiving smaller cuts.

But many NGOs are deeply unhappy with the terms.

Leading international NGOs in Yemen have written a joint letter to the UN humanitarian coordinator, to be delivered this week, criticising the agreement, according to one of the head of a major NGO that signed it. Many NGOs are so far unwilling to accept Saudi funding for humanitarian response on the basis that its bombing campaign and blockade are behind much of the suffering.

Among the letter’s objections is that the Saudi government – clearly aligned with one side in the conflict – insisted the Yemeni government-in-exile be informed of all projects implemented with the money – including in territory controlled by the Houthis, the NGO head said.

Both the Houthi rebels now in control of the capital Sana’a and the deposed President Abdu Rabu Mansour Hadi, in exile in Saudi Arabia, claim to lead the government. The international community almost exclusively supports Hadi as the legitimate ruler, but his status is complicated by the fact that he officially resigned in January before backtracking.

As such, the NGO director argued, to give information to one side in an active civil war could put both NGOs and the people they support at risk. He added he was concerned that areas under the control of the Houthis would be neglected under the agreed terms.

“Either the UN will succeed in making the Saudis understand that we cannot forget our humanitarian principles, or we won’t take any [of the money],” he said.

Oxfam spokesman Imad Aoun confirmed the existence of the letter but refused to discuss its content and the specific conditions on the funds.

“The fear in this situation is that we are perceived to be taking sides [in the conflict],” he said. “As long as [the UN appeal] is 100 percent Saudi-funded, we will not be accepting any funding from it.”

Both the KSC and the UN denied that there were any unjust conditions on the aid.

“We don’t distinguish between Yemenis. We are keen to help all Yemenis regardless of sect, religion, or colour,” Sabbagh said.

Outside of Yemen, some see the centre as part of a wider shift towards more assertive Saudi foreign policy. Since King Salman bin Abdulaziz was crowned in January following the death of his half-brother King Abdullah, he has pursued a more aggressive set of policies against regional rival Iran. While the bombing campaign in Yemen against the allegedly Iranian-backed Houthis has been the most obvious example, the public announcement that Saudi has been in talks with Israel over how to thwart Iran was also seen as a major shift.

Barakat, of the Brookings Doha Center, said the centre was part of a more direct stance. “It reflects a whole new way of managing their foreign affairs, which is to become more assertive, more engaging in their own way, and probably exerting a greater degree of control,” he said. Hamid agreed the centre was “trying to mark a new era with a new king”.

Sabbagh said that while the centre is not under the control of any particular ministry, it would also have a degree of autonomy from the king. “It is even less [under] governmental control than [British state aid agency] DFID,” he said. “We have our own policy; we have our own strategy; we are independent from any political influence.”

In recent years, Saudi Arabia’s neighbours have improved their aid transparency and efficiency in ways the Gulf’s largest state hasn’t.

The United Arab Emirates established the Ministry of International Cooperation and Development in 2013, and has begun producing annual public reports of its spending.

“We think the establishment of the centre is extremely timely, given the landscape of humanitarian crisis in this region and globally, and given that KSA is a major humanitarian relief provider,” Hersi, of OCHA, told IRIN.

But Hamid warned that despite the shift, she was discouraged by the seemingly haphazard and rapid way in which the centre was established.

“Saudi is a long way behind Kuwait and the UAE in terms of coordinating the way its aid is run,” she added, pointing to a historical lack of transparency in where its money has been spent.

Saudi Arabia has also faced criticism for at times failing to deliver on its promises: last month, the World Bank revealed that Saudi Arabia had delivered less than 10 percent of the $500 million pledged for the reconstruction of Gaza.

Sabbagh said the centre’s leadership was committed to the highest standards of transparency and accountability.