A ban on shipping in Yemeni waters is worsening a severe fuel shortage that could have a devastating impact on public health.

Three weeks into a Saudi-led bombing campaign against Houthi rebels and with intense fighting continuing on the ground, the country is close to running out of fuel.

On Saturday the Yemeni government-in-exile formally banned ships - including those carrying fuel and food - from entering the country’s waters without prior inspection. Saudi Arabia and its allies have been asked to enforce the ban using their warships.

“I don’t think people understand that cutting off diesel and fuel to a country has catastrophic results,” Julien Harneis, UNICEF representative in Yemen, told IRIN.

Although ports are in theory operational, “it seems that commercial ships are not being allowed to approach” them, said Harneis.

Already, thousands of vaccinations against polio, measles and other diseases in the southern Lahj province have had to be thrown away because fuel for their essential refrigeration ran out, Harneis explained.

“You are looking at thousands of people who would have been vaccinated” against life-threatening diseases, he said, warning that a far larger reserve of vaccinations in the capital Sana’a was also at risk.

Three weeks after a Saudi-led bombing campaign against Yemen began, many roads are deserted 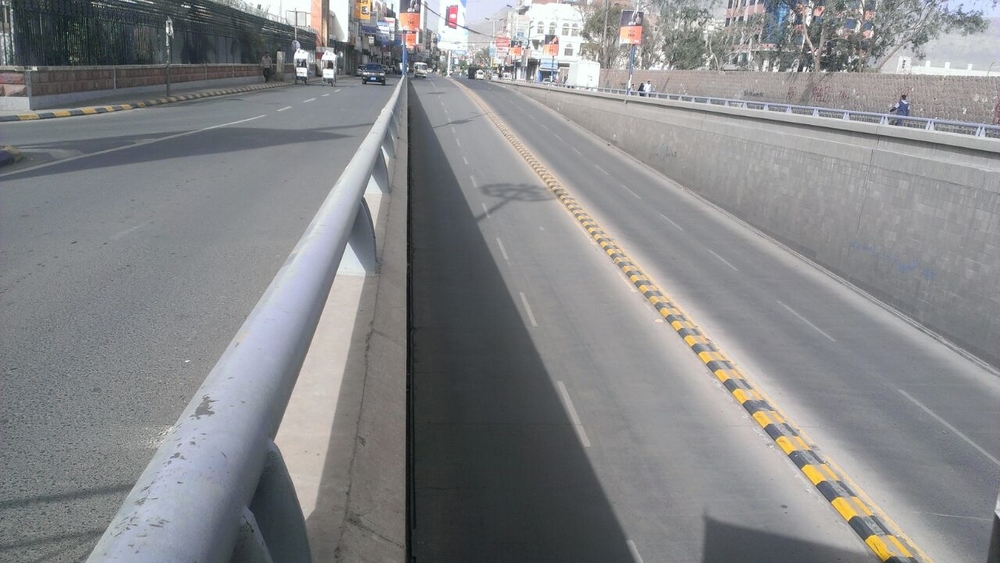 “[In Sana’a] we are still able to acquire a little diesel in order to run cold-chain and water services,” he said. “We are not sure how long we can do that.”

“The vast majority of water is pumped up using diesel generators. If you don’t have electricity and you don’t have power, people aren’t going to have water, which will mean that people will end up using very bad quality water. You will get water-borne diseases, diarrhea and eventually cholera and people will die of that,” he said.

The international NGO Action Against Hunger told IRIN last week its staff had been unable to reach people in need as they had run out of petrol for their cars.

An employee in the Ministry of Energy, who asked to remain anonymous as he was not permitted to speak to the media, told IRIN that there had also been widespread theft of petrol by officials in recent weeks.

Al-Muslimi said the restrictions were leading to unnecessary deaths.

“People in hospitals have literally died because there was no [electricity] to help them,” he said.

“It doesn’t matter if you have money or not, there is no fuel. Kids are playing football on the highways as there are no cars,” he added.

In Sana’a, thousands of people are without power in their homes.

“We are really stunned. We have had no power for three days now, no oil for a couple of weeks, no water, and now a gas shortage crisis has started,” Hussein Al-Ne’emi, a 43-year-old administrator, said.

He added that the cost of water had more than tripled, from $13 to $43 for a tankful - equivalent to a quarter of his monthly salary.

Some local mosques are providing water, with children queuing for hours to get 10 or 20 litres.

“We do not have money to buy a tanker of water, so the only solution is to send our kids to bring us water from the mosques,” Mohammed Al-Mahweeti said.

“We have lived in complete darkness for three days now, we have neither drinking water nor water for washing. This is madness,” said 31-year-old accountant Abdullah Mohammed.

Acting Foreign Affairs Minister Riyadh Yassin has said ships carrying relief aid, food or medicine would be allowed to dock and unload after being inspected.

It was not immediately clear how many, if any, such vessels had docked since the ban was announced.

BIMCO, the world’s largest shipping association, said it understood all ships destined for Yemen were being searched offshore, with five laden with grain currently at anchor off the coast of the city of Aden waiting to be searched.

Giles Noakes, Chief Security Officer for the company, said it was unclear whether the ships were eventually able to unload their cargo. “It is not certain what the de facto situation is,” he said.

“It is clear that the situation is getting considerably more difficult, which may make calling at Yemeni ports significantly more risky,” he added.

Yemen imports more than 90 percent of its food, while political turmoil has meant the country has been increasingly dependent on fuel imports in recent years.

The UN’s Food and Agriculture Organization has warned of food shortages because the conflict has interrupted crop planting.

Related articles: Four reasons the crisis in Yemen is so dire