This article is part of our in-depth coverage. Read more like this...
FREETOWN

On the return trip to Freetown from Kenema a couple of days later we meet Laventa Konneh in Moyambo town, the only person allowed to leave her house because the town is in lockdown and she is a contact tracer.

She goes house to house in Moyambo with kits of chlorine and rubber gloves to check if people Ebola patients have come into contact with over the past 21 days have symptoms of the disease, and to remind them how to stay out of harm. Do households with Ebola sufferers face stigma in this town? "No, there is no stigma here. If they are quarantined in their house we can watch them, that's all." Does everyone tell the truth about illnesses in the family? "Some tell the truth, some do not - some are being afraid," she says.

"The people who come help: we need them yesterday. So let them come tomorrow!"

Some 2,896 people in Sierra Leone have contracted Ebola in Sierra Leone in this outbreak, with 425 new cases reported between 6 and 12 October alone according to the WHO and Ministry of Health. Most of the new cases are in Western Area, which comprises the capital Freetown (172 cases) and neighbouring Port Loko and Bombali districts (161 cases). The central districts of Bo (22 new cases), and Tonkolili (27 new cases) are also areas of intense transmission.

It's hard to get an accurate picture of which clinics are functioning where in the capital but most are small-scale except for the government's 200-bed-capacity Hastings Treatment Centre outside town, which is the largest centre in the country.

An Italian NGO runs the 18-bed Lakka clinic; King's College runs several small centres; Maculy Street Hospital opened in September; and Save the Children will start running a clinic in the Freetown suburb of Kerry Town in two weeks. By the end of November 750 UK soldiers will be here to build clinics and set up logistics systems; about 100 British doctors are already here.

But the capital remains 1,000 beds short, say the government and WHO, and the caseload is growing daily. Patients must travel to Bo 216km away and even Kenema, 255km away, to be treated by MSF and the Red Cross. 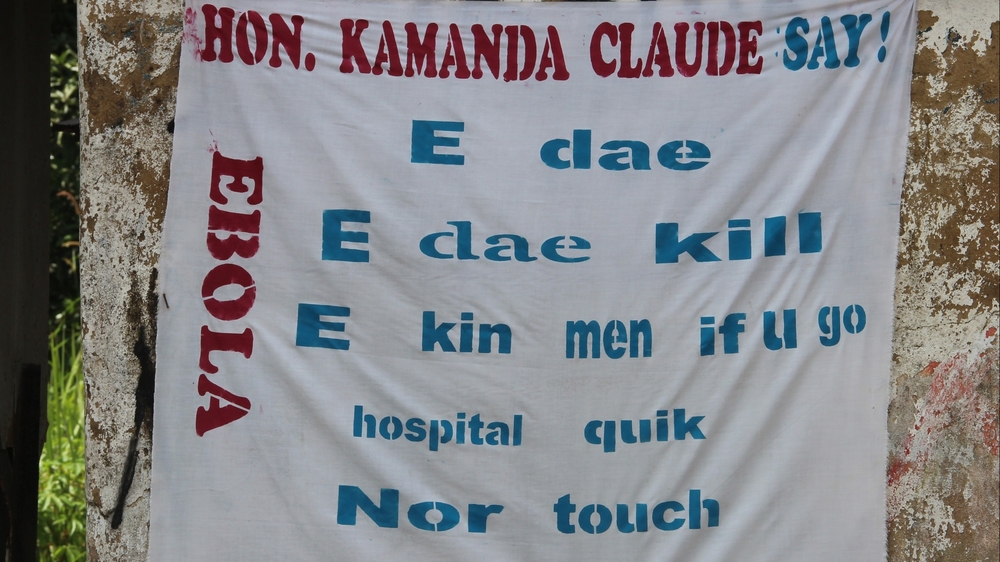 As President Ernest Bai Koroma put it in a speech (in Krio) at Hasting's hospital: "The people who come help: we need them yesterday. So let them come tomorrow!"

The ambulance shortage - there are just 31 to serve the whole country though new ones are apparently on their way - means patients wait hours, even days for pick-up. While lab capacity is mounting in the capital, getting blood samples from the sick and dead to the lab can also take days. Sample results "go through two or three layers instead of directly from the lab to the clinic or family - who often don't find out at all," says Margaret Harris, a WHO spokesperson and doctor in Freetown.

Agencies and the government are trying to map out a blood sample delivery system using Okada drivers. 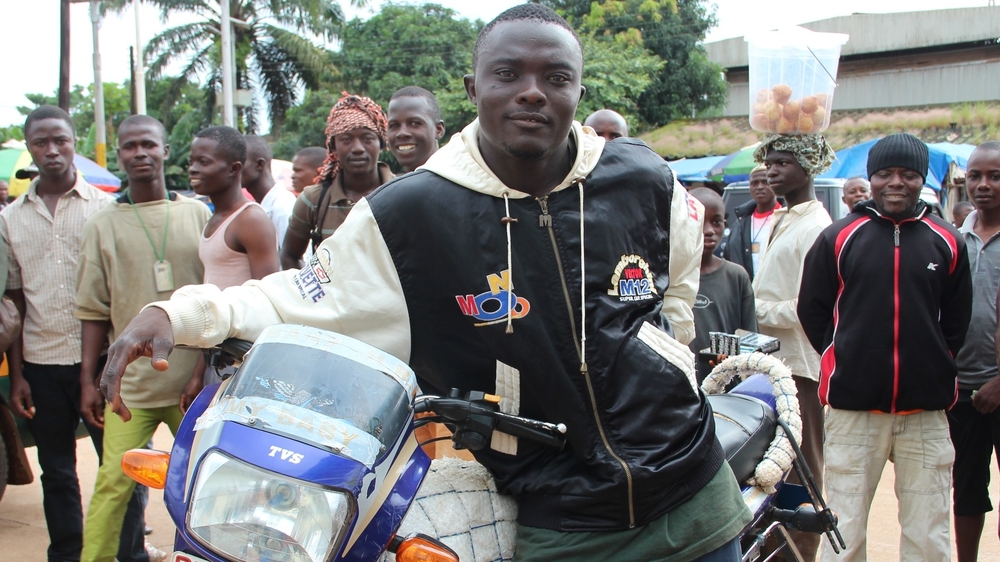 Agencies and the government are trying to set up a motorbike courier system so that samples and results can be picked up and delivered as soon as possible. "Samples come in a variety of ways," says Harris. "Sometimes they come from far away. Sometimes they're walked over from a hospital. There is no rapid way to ensure they come quickly."

Ministry of Health spokesperson Yahya Tunis says they are urging other ministries to lend their vehicles to the Ebola fight.

More labs are being set up, including a large new Chinese one, but in early October Western Area still had a testing backlog of about 125 samples a day, said Tunis. These delays can up the death rate as many families are forced to live among their dead Ebola-stricken relatives, sometimes for days. My filmmaker companion Ricci passed a neighbourhood where angry residents were throwing rocks at police cars after the body of an Ebola victim had still not been picked up three days after the family called the authorities. "We're hoping international partners will send more infection control specialists, clinicians and surveillance officers. We really don't just need more offices and meetings," says Tunis.

Members of one of the Sierra Leone Red Cross dead body management teams in Freetown say they simply cannot keep up with the calls they get for pick-ups. We tried to follow them but they had just one car available and need two to do their job: one to carry the team, the other to carry the dead body. The Ministry of Health provides them with the second but only sporadically.

After waiting for the car for 24 hours, Ricci was able to follow them into neighbourhoods around Freetown to pick up bodies. But the first house they went to: "the test results had not become back so they had to leave the body behind amid protests," she says. This procedure will soon change, says Tunis, and bodies will be collected anyway.

Ricci continues: "We headed to a house where a 20-year-old man had died. Test results here had also not been confirmed but he had demonstrated Ebola symptoms. The team - all young men - were meticulous about putting on their protective gear and looking out for one another before setting off to enter the house. They disinfect the body and areas in the house where it has lain with chlorine spray before placing it in double body bags. The team manoeuvered the youth on a stretcher up the narrow, steep, rocky path. It took several men. They then drove his body to a cemetery to be safely buried. The whole process takes about 40 minutes."

"The supervisor wore no PPE and so stayed far from the house to stay safe. I stayed even further back. It was difficult having to film without much direct interaction. For instance, the nephew of the deceased was there, and normally in that instance I would shake his hand, express my condolences, talk softly to him. But he had most likely been exposed to his uncle before he died, so I kept my distance and just called out a few questions to him from afar. It didn't feel intimate - he had just lost a loved one.

"I also had to fight my instinct to go in closer to film, which would snap my attention away from the story and back again to the risks around me. I was constantly questioning everything. Am I far enough away? Throughout the trip, it was hard to determine that fine line between rational safety precautions and extreme paranoia."

It is unknown how many people have died at home, their families caring for them rather than sending them to a hospital which many said was simply a place to die alone. The government and its partners are trying to shift this perception through radio announcements, posters, speeches.

"Children are already traumatized. They have seen dead bodies, buried their loves ones, seen their parents fall ill and been taken from them. They're asked not to play together, not to touch anything, they have nothing to do. It's confusing and traumatic for them,"

We visit Hastings Hospital, which serves patients from Freetown, Port Loko and Bombali district and was discharging 46 Ebola survivors at a ceremony led by President Koroma. "Our brothers and sisters here they feel good for their lives and they can go back now to their communities. If Ebola Catch For You, You report quick and your life go save. Go out and tell that story!" he announced to the health workers and reporters gathered.

In the face of bed shortages home care is often the only option, leaving agencies in confusion as to what to do: distribute hygiene kits to households to improve their survival chances, or straight out dissuade them from home-based care? Some NGOs and agencies, including MSF and the US Centers for Disease Control, are distributing Ebola-affected families with chlorine tablets, gloves, soap, rehydration solution and painkillers to help them care for their loved ones. But few have the time to accompany this with house-to-house training. Home-based care "should be for a few hours only, until a bed is available."

Hastings treatment centre is evidence of the government's vastly increased capacity and expertise to deal with Ebola. "All is not lost. We can rally round and rise to the occasion. Yes, people will come to help us. But we want to talk to you on equal terms," says the president.

But unless this is matched by upped efforts from the outside - and soon - Ebola will continue to spiral out of control. The significant progress that Sierra Leone has made in improving its human development indicators, encouraging investment, reducing maternal and infant mortality, is at risk, say development officials. "Almost all of our development is on hold here. It is practically impossible to get anything done," said Issa Davies at UNICEF, which works with the government and partners to improve maternal and infant health, reduce malnutrition rates, improve access to education and clean water.

Some 108,000 children due to sit their secondary school exams have missed them, says UNICEF education head, Mgbechikwere Ezirim.

"Children are already traumatized. They have seen dead bodies, buried their loves ones, seen their parents fall ill and been taken from them. They're asked not to play together, not to touch anything, they have nothing to do. It's confusing and traumatic for them," she says.

Teachers are still being paid and the government has just launched a radio education programme aired over a 12-hour period to four different age groups. Mohammed Sesay, Sierra Leone's Director Inspectorate of Education, told me: "Before Ebola we were making a lot of progress. Ebola has halted that progress. We're losing ground."