Many of the world’s humanitarian catastrophes are described as forgotten emergencies, but only this one is playing out relatively unnoticed on the doorstep of Europe, over an area roughly the size of Switzerland.

The frozen, low-intensity conflict in Ukraine’s Donbass region will mark a grim, four-year milestone in April. And the numbers aren't pretty: more than 10,000 killed and at least 23,000 injured.

At the beginning of 2014, Ukraine had no displaced people. Now, it’s on the world’s top ten list, with an estimated two million.

The roots of the conflict can be traced back to the winter of 2013/2014, when then-president Viktor Yanukovych backtracked on a promise to enter into an association agreement with the European Union. That, in turn, sparked the Revolution of Dignity, which ousted the pro-Russian president in February 2014 but cost the lives of at least 100 civilian protesters. Shortly afterwards, thousands of armed separatists invaded Donetsk and Luhansk in eastern Ukraine and remain there to this day. Several ceasefire agreements, including the latest “Back to School” initiative in September, have failed to bring about an enduring peace. The two regions, knows as oblasts, are now self-proclaimed pro-Russian republics.

Hundreds of thousands of Ukrainians face an uncertain winter as the shelling continues unabated. Two major water plants are located near the front line (known as the contact line), so these civilians have to live with the constant threat of having their water and heating cut off. And there’s the added risk of a chlorine gas explosion should a wayward shell hit storage areas at the plants. 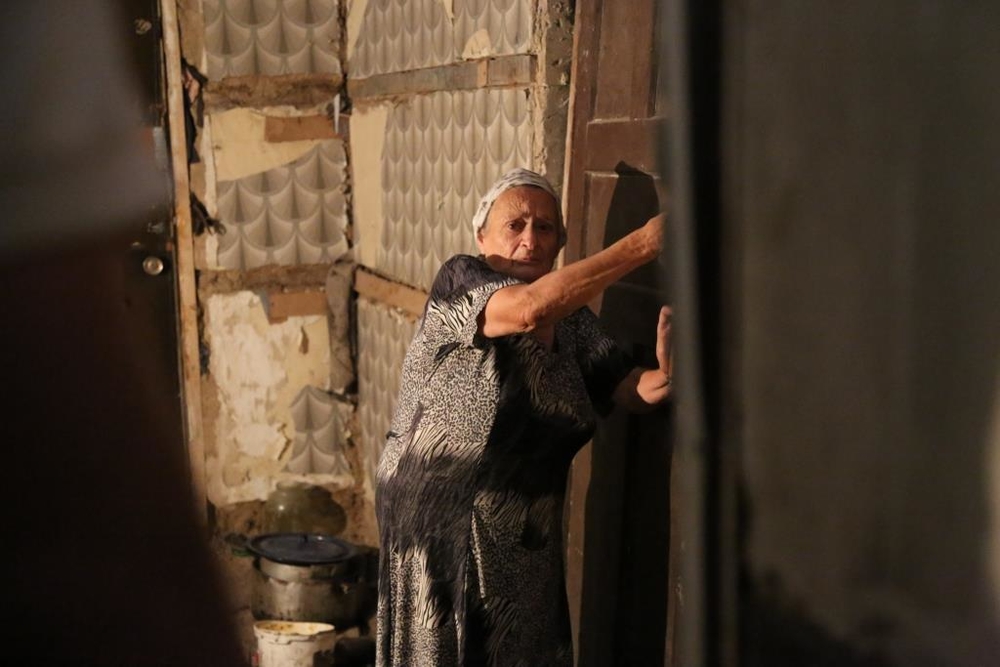 The sharp decline in conditions from an escalation in hostilities and lack of access for repair crews has led the UN to warn of “grave consequences” for millions of Ukrainians if water or heating is cut off, and a reminder that the intentional disruption of quality water supply or critical heating systems is a violation of International Humanitarian Law.

A recent UN appeal targets 3-4 million people in need of humanitarian aid and protection. Of those, 70 percent are either elderly, women, or children. Many live in unbearable conditions such as abandoned sanatoriums. UNICEF estimates that more than 200,000 boys and girls live within 15 kilometres of each side of the contact line, of which about two percent are regularly forced to take refuge in improvised bomb shelters. The children’s agency also estimates that one school in five has been damaged or destroyed.

About 700,000 civilians cross the 459-kilometre “contact line” each month to purchase groceries, visit relatives, withdraw money, or receive pensions. What should be a short journey is often turned into a long ordeal because of excessive waits at checkpoints on both sides. Although the situation has improved in the past year, travellers are exposed to shelling, the threat of land mines, and, in winter, to sub-zero temperatures. Bombed-out roads and bridges add to the frustration.

The situation in eastern Ukraine can best be described as a low-intensity conflict that spikes regularly. As of mid-November, the number of ceasefire violations has increased. In just one day there were almost 2,000 explosions. “This, I believe, was the saddest record in the second half of the year,” said an OSCE representative.

A huge barrier to peace is the concentration of heavy weaponry and the close proximity of the two sides. When shelling occurs, it often lands in densely populated areas, inflicting maximum damage and casualties. When one side fires, the other retaliates. It’s now hard to find apartment blocks, bridges, schools, or hospitals in the towns dotted along the contact line that have remained untouched by the heavy shelling. 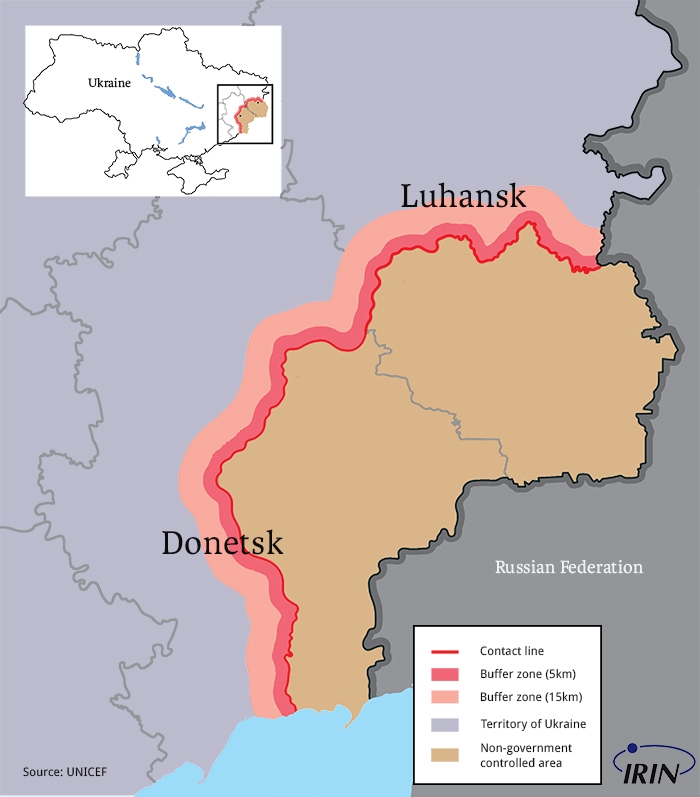 Land mines are also becoming an increasing problem. In November a police car near the southeastern city of Mariupol drove over one, killing a police officer and severely injuring two others. Many farmers are afraid to work their land for fear of unexploded ordnance. Earlier in the conflict, cluster munitions – banned by international treaties – were used by both sides, according to Human Rights Watch.

The prospects for progress couldn’t be much bleaker: Experts and diplomats at the recently concluded Halifax International Security Forum said even the tightening of sanctions against Russia may not be enough to force peace.

The diplomatic tool box appears shockingly empty after several failed attempts in Minsk and elsewhere to achieve a long-lasting, sustainable peace. The OSCE Special Monitoring Mission to Ukraine, which has about 700 monitors in the east, is being continuously targeted or denied access, especially to strategic areas along the Ukraine-Russian border.

Desperate for progress, both sides have proposed a UN peacekeeping mission. However, Ukraine is demanding it be deployed throughout the conflict zone, including the international border, while Russia wants a mission limited to the contact line. Aside from reconciling vastly different proposals, UN diplomats would also need to secure commitments from member states and a unanimous vote in the UN Security Council. 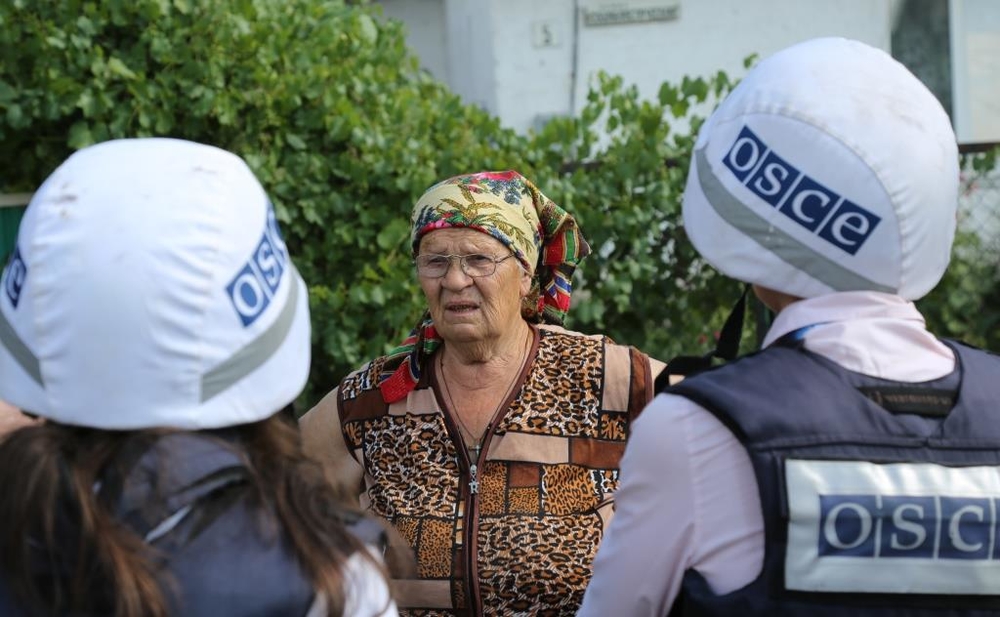 Mariia Aleksevych/OCSE
OSCE Special Monitoring Mission speaking to a civilian in Kamianka
As for the OSCE, it shows little enthusiasm for a UN mission, preferring instead to press ahead with a multi-level diplomatic negotiations track based on the Minsk Protocol, an accord to halt the war reached in September 2014.

But more than three years after the Minsk agreements, both the peace process and the conflict appear deadlocked, and millions of Ukrainians are digging in for yet another hard winter.