Last week, residents battled a scorching blaze in one of the living containers inside the Moria refugee camp on the Greek island of Lesvos. A strong wind fuelled the fire, making it difficult for firefighters to extinguish. A child died.

Coming less than six months after another deadly fire at the camp, the incident underlined what asylum seekers, humanitarian workers, and aid groups have been saying for years: the massively overcrowded and unsanitary detention centre isn’t fit for purpose and is dangerous to human life.

As coronavirus sweeps across the world, they worry that if Moria was already unable to address basic health and safety needs, it is in no position to meet the challenges of COVID-19, as 20,000 asylum seekers inhabit a space intended for 3,000 and must obey lockdown procedures that trap them in close living quarters.

“It’s a disaster – more than a disaster,” Salam Aldeen, founder of the Lesvos-based Team Humanity NGO, told The New Humanitarian.

Aldeen described how food and medicine are scarce; how sanitation in Moria is worrisome: there is one water tap for every 1,300 people, and precious little soap; how the camp, where makeshift shelters spill out into surrounding olive groves, is an ideal site for the coronavirus to spread amongst an already vulnerable population.

“Hygiene and sanitation conditions are unsafe,” Boris Cheshrikov, the spokesperson in Greece for the UN’s refugee agency, UNHCR, told TNH. “Many cannot see a doctor as there are simply too few medical staff.”

Since 2016, when the EU signed a controversial deal with Turkey, the Aegean islands have become a holding area for asylum seekers waiting to have claims processed. Most are from Afghanistan, Syria, Iraq, Palestine, and the Democratic Republic of Congo, and more than one in three are children. After crossing a narrow stretch of the Aegean Sea from Turkey on small boats, they remain in the island camps for up to a year, sometimes longer, before being transferred to the mainland or deported.

More than 20 humanitarian organisations – including Human Rights Watch, Amnesty International, and the International Rescue Committee – called this week on the Greek government to reduce the congestion in Moria and similar camps on other Aegean islands by relocating the most vulnerable to safer places on the mainland.

Médecins Sans Frontières, which estimates the population of the five island camps at 42,000 and the total capacity at 6,000, went a stage further, calling for their urgent evacuation.

“It would be impossible to contain an outbreak in such camp settings in Lesvos, Chios, Samos, Leros, and Kos,” Dr. Hilde Vochten, MSF’s medical coordinator in Greece, said in a statement. “To this day, we have not seen a credible emergency plan to protect and treat people living there.”

Last week, Lesvos confirmed its first case of coronavirus: a 40-year-old woman returning from holidays in Egypt and Israel is now in quarantine. Nationwide, according to the official 26 March figures, Greece had 892 confirmed cases and 26 related deaths.

On Tuesday, the EU asked the Greek government to move the asylum seekers at greatest risk from coronavirus to the mainland – a call Athens has so far resisted, arguing that the chance of contracting COVID-19 is less on the islands. Earlier this month, the EU pledged to take in 1,600 unaccompanied minors from the camps, but that plan has stalled due to the coronavirus.

The EU has also been forced to put on hold a plan to pay those stranded on the Greek islands €2,000 per person to return home under a voluntary scheme targeting so-called economic migrants. The EU’s home affairs commission said it hoped at least 5,000 people would take part in the plan to alleviate the pressure in the camps. Again, the coronavirus made that impossible.

“There are too many travel restrictions right now,” Christine Nikolaidou of the UN’s migration agency, IOM, told TNH.

On 17 March, the government announced it would restrict visitors from accessing the camps and reception centres for two weeks, though aid organisations such as MSF, IOM, and UNHCR are exempt.

During this time, residents are also being discouraged from leaving the camps or circulating inside. It remains to be seen how residents are expected to socially distance from each other, given that standing in line for food remains a multi-hour activity in Moria. On 23 March, Greece implemented a full lockdown for all residents of the country. 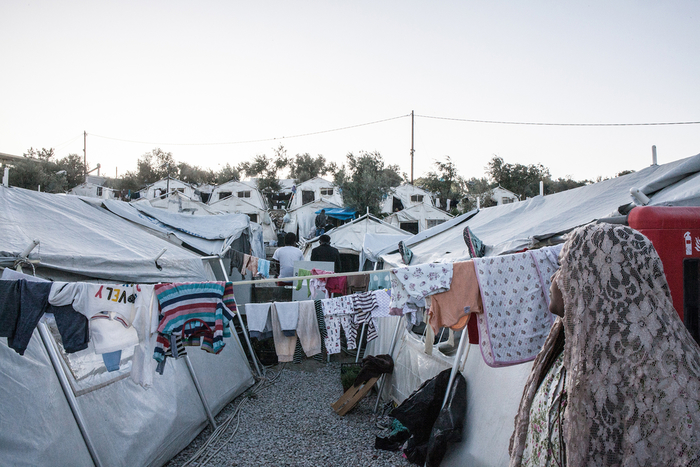 Cristina Mastrandrea/TNH
Thousands of asylum seekers live in a tent camp overspilling from Moria that has fewer services like electricity or sanitation, and no security protection.

On the island of Kos, Mayor Theodosis Nikitaras has said he believes locking down camps isn’t enough and called for stripping asylum seekers of their freedom of movement.

When coronavirus does hit, asylum seekers will be missing a key component of the social safety net. Last July, the ruling New Democracy party removed them from AMKA, the Greek social security system. Legislation passed late last year was supposed to provide an alternative to health insurance, but that is yet to be implemented.

The looming threat of coronavirus overlays an already hostile landscape in Greece for migrants and asylum seekers. On 28 February, Ankara announced it would allow migrants to leave, and “opened the door” to the EU, reneging on its 2016 deal with Brussels – under which Turkey agreed to receive billions in funding in return for reducing migration to Europe.

In early March, over 10,000 people responded by heading for the borders, according to Turkish authorities. Most bolted for Greece by land or sea in scenes that echoed the height of the 2015 migration crisis, when 856,000 people arrived in a single year.

As thousands of people desperately tried to enter Greece, the reaction from both state forces and some of the local population reflected the stance of Mitsotakis’ right-wing, anti-migrant government. In Evros, the land and river border separating Greece and Turkey, thousands of migrants were met by soldiers and police using tear gas and firing shots. One Pakistani migrant was killed. The Greek government denied using live ammunition.

In Lesvos, people arriving by boat were met by angry local mobs who refused to allow them to dock; boats were also reportedly attacked by the Greek Coast Guard.

“Greek island communities have shown commendable solidarity and compassion for the plight of refugees, especially since 2015,” Cheshrikov said. “But they have been facing a disproportionate responsibility to host large numbers of refugees and migrants for years, and support to ease this pressure has been continuously delayed,” he continued. “Lately, they have been expressing their anxiety and frustration through public protest, and this is understandable. However, the violent and aggressive attitudes that have been shown by some must be condemned and must remain isolated.”

Virulent anti-migrant rhetoric and physical violence by some has created a particularly tense situation in Lesvos. Journalists, doctors, and humanitarian workers were physically attacked in early March, warehouses storing food were burned, and asylum seekers were violently pushed back.

Several NGOs had to temporarily close their doors, including MSF. At least two children died when their boat capsized off the coast of Lesvos. The Greek government responded by announcing it would stop processing asylum applications for the month.

While the hostility has abated during the recent lockdown, Vasilis Tsarnas, co-administrator of the Greek Helsinki Monitor’s Racist Crimes Watch, said no one can predict how tensions will play out if the coronavirus really hits the camps. “Even if physical attacks (or our reporting capacity) might have been reduced these days due to the lockdown, things could go out of control when this moment comes,” he warned.

As the threat of COVID-19 becomes more real by the day, some camp residents have taken matters into their own hands. In Moria, migrants working with Team Humanity have begun sewing their own facemasks. And in Vathy camp on Samos, children have made educational posters about hand-washing and sanitation.