This article is part of our in-depth coverage. Read more like this...
GOMA, The Democratic Republic of Congo

Ebola cases in the Democratic Republic of Congo’s densely populated eastern city of Goma rose from one to four* this week, raising fears of a wider outbreak of the deadly virus that has already cost more than 1,800 lives in the past 12 months.

Key to containing the spread will be tracing and vaccinating everyone known to have come into contact with the four people infected, and then the contacts of those contacts. A ministry of health presentation seen by The New Humanitarian lists 538 cumulative contacts traced in Goma.

Kate White, emergency medical manager for Médecins Sans Frontières, said ongoing efforts to engage Goma communities in the response and to improve awareness of the disease, its signs and symptoms, needs to be “scaled up” quickly.

“The problem is that Goma is massive and… the level of preparedness is not always there,” she said.

Interviews with multiple Goma residents – many of whom were unaware or refused to accept there were new Ebola cases in the city – suggest more outreach work is necessary.

“We need to see a person with Ebola before we can confirm it is here,” Edson, a motor taxi driver, told TNH.

Goma, the capital of North Kivu province, has a population of roughly two million people and is a major transit hub with an international airport and a porous border with Rwanda. Roughly 15,000 people cross between the two countries every day, including local traders and travellers en route to Rwanda’s capital city, Kigali.

The rising cases here have left aid workers and local residents questioning whether the sprawling lakeside city is prepared for a wider outbreak. Just 54 beds – 30 of those confirmed today – are currently available for Ebola patients, and the general population has varying levels of awareness about the virus and how to prevent it from spreading.

In response to the new cases, Rwanda temporarily closed its border with Goma on Thursday for a few hours, citing efforts to “reinforce screening procedures”.

The closure caused some food prices to surge and triggered panic among local residents who rely on cross-border trade. The World Health Organisation has said border closures could encourage people to use unofficial crossings, where they may not be tested for Ebola symptoms, and warned that restrictions on travel or trade could negatively affect Congo’s economy and the wider Ebola response.

The epidemic – which is now the second deadliest on record and shows no signs of slowing – remains concentrated in the North Kivu cities of Beni and Butembo, hundreds of kilometres north of Goma. Militia violence, attacks on health workers and treatment centres, and community distrust continue to hamper relief efforts.

“In the last three months, we’ve seen more cases than in the previous nine,” said Amy Daffe, deputy country director for Mercy Corps in Congo. “We cannot deny that the pace and scale are escalating."

The bustling city of Goma has been preparing for a possible outbreak since last year. Health workers have been vaccinated and trained on understanding the signs and symptoms of Ebola, while a contact tracing system – which identifies people who have encountered an infected person –has been set up.

Hand-washing stations and infrared thermometer guns are now a permanent feature outside hotels, restaurants, and cafes as well as border crossings and roads in and out of Goma.

But as cases rise there are concerns the city is not yet ready for a major outbreak of the virus. As of Thursday night there was just one functioning Ebola treatment centre in the city, offering just 24 beds for a population of two million people.

On Friday morning, MSF said it had added a further 30 beds in a second treatment centre – a construction site just 24 hours earlier – and added that capacity would rise to 72 within the next few days.

Sources in the aid community said it took several months for MSF to locate and build the second treatment centre due to bureaucratic hurdles put in place by the Congolese government, which did not view the facility as a priority.

The lack of land in the heavily populated city, and the challenges of construction on the rugged volcanic rock that coats Goma, have been further impediments.

“Any scale-up of the response in the city must be sure to protect lives and livelihoods,” said Daffe. “We already saw the price of meat increase with the temporary closure of the Rwandan border yesterday.”

Rwanda's state minister for the East African Community, Olivier Nduhungirehe, called the closure “a misunderstanding”. But a senior Rwandan immigration official at the border told TNH a lack of transparency from the Congolese authorities over the recent cases in Goma was to blame.

A new man in charge

The first Ebola case in Goma, a preacher travelling from Butembo, was reported in mid-July and prompted the WHO to declare a Public Health Emergency of International Concern – a move designed to galvanise additional funding and international attention. 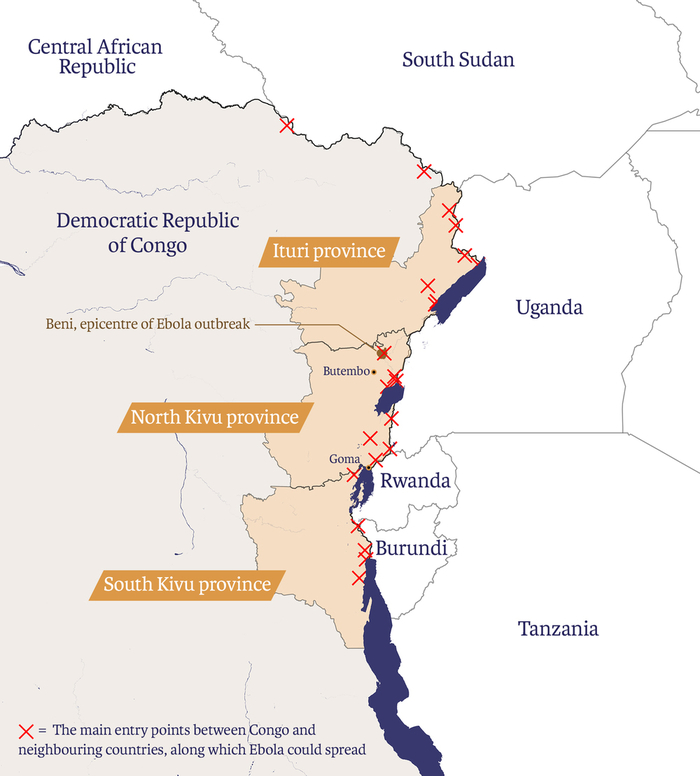 The latest cases revolve around a now deceased man in his 40s who contracted Ebola in the northeastern province of Ituri before arriving in Goma on 13 July.

The father of 10 – a gold miner – spent five days being treated at home before being taken to a health facility. By then he had already passed on the virus to his one-year-old daughter, his wife, and the nurse that treated him – the first known cases of active transmission inside Goma.

The new cases follow the acrimonious resignation of Congo’s health minister, Oly Ilunga, last month. Ilunga – who has been replaced by a team led by Jean-Jacques Muyembe, director of Congo’s National Institute of Biomedical Research – had opposed calls from the WHO and other health experts to introduce a second experimental vaccine produced by the company Johnson & Johnson.

“There was a blockage before with the former minister of health but the door [to introduce a second vaccine] is no longer closed,” said Claude Mahoudeau, emergency coordinator for Ebola for the Alliance for International Medical Action, a health NGO.

At a three-day meeting in Goma this week, Muyembe called on NGOs, UN agencies, and donors involved in the response to work more closely with the local health system to help bring the wider outbreak to an end within the next 90 days, according to Mahoudeau, who attended the meeting.

With the epidemic entering its second year, residents of Goma say this can’t come soon enough. “The population is in very grave danger,” said Leon, a mobile phone credit vendor.

(*An earlier version incorrectly stated there were five cases in Goma. This story was updated on Monday, 5 August.)