The stand-off in Khartoum between pro-democracy protesters and the ruling Transitional Military Council is being closely watched in troubled Blue Nile – an impoverished Sudanese region cut off from aid and largely forgotten by the world.

Blue Nile has been at war with Khartoum for decades. Hopes for a more peaceful future rest on the TMC being willing to negotiate on rebel demands for greater autonomy, and on the rebel leaders themselves resolving internal divisions.

Delay will worsen an already deep humanitarian crisis in this remote southeastern corner of the country, where years of fighting has displaced more than 200,000 people and forced half a million into neighbouring countries, according to a March report by the rebels’ humanitarian wing, the Sudan Relief and Rehabilitation Agency.

Awadallah Yacob, in the village of South Ulu in Blue Nile’s Bau County, is one of those in need. Squatting on a wooden stool in his yard he takes an aggressive bite out of a soggy baobab leaf. Sometimes it’s all he eats for days. “The situation is getting worse and no one’s coming to help us,” said the 30-year-old. 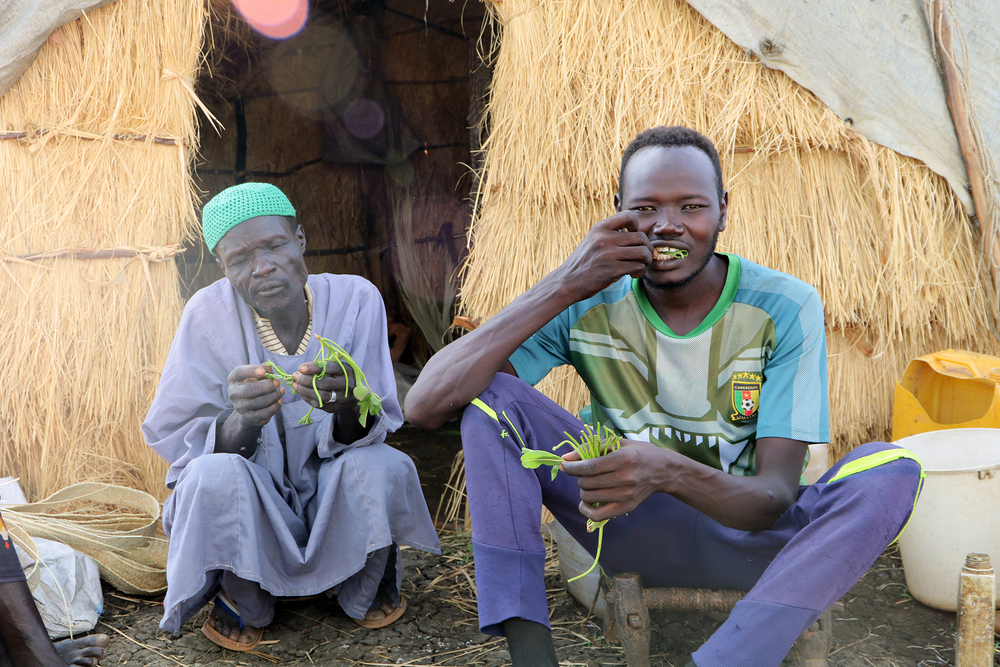 Sam Mednick/TNH
Awadallah Yacob chews on a baobab leaf outside his home with his neighbours in South Ulu village.

It has been eight years since forces loyal to then-president Omar al-Bashir first attacked Blue Nile – one of two provinces of the country at least partly held by the Sudan People’s Liberation Army-North (SPLA-N) rebels.

When the Comprehensive Peace Agreement was signed in 2005, helping to end more than two decades of civil war and usher South Sudan to independence, the fates of South Kordofan and Blue Nile – long neglected by Khartoum – were unresolved.

They became known as the “Two Areas” and a popular consultation was to define their status – yet the vote was never completed and fighting broke out in Blue Nile in September 2011, shortly after South Sudan became a country.

Even though Blue Nile has been fairly calm for the last year, with unilateral ceasefires in place among all warring parties, no side has laid down its arms.

Two years ago, an internal rift occurred within the rebels’ political wing, the Sudan People’s Liberation Movement-North (SPLM-N). Fighting erupted between the movement’s chairman, Malik Agar, and his then deputy, Abdel Aziz al-Hilul.

The split exacerbated the already dire humanitarian situation: separating families, pitting ethnic groups against each other, and cutting people off from their livelihoods.

“Prepare for peace and prepare for war,” Agar told his army when he visited Ulu town earlier this month – a reference to both the potential collapse of a ceasefire Khartoum declared in April, and a sign of the deep distrust with al-Hilul’s faction.

In an interview with The New Humanitarian, Agar said he had seized on the toppling of al-Bashir to try to break the deadlock, sending a team shortly afterwards to meet with the TMC in Abu Dhabi to negotiate the future of Blue Nile and South Kordofan. 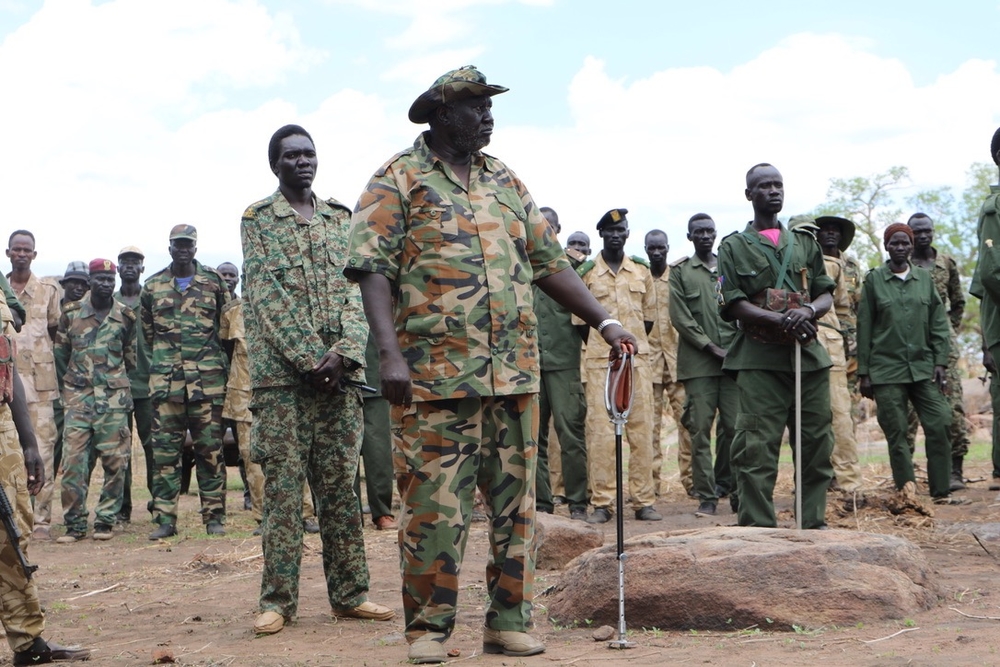 Sam Mednick/TNH
Rebel leader Malik Agar on his first visit to Ulu town since internal fighting erupted within the SPLM-N in 2017.

He said the two sides made a “gentlemen’s agreement” that within six months key issues such as stopping the war, the status of the areas, and the return of refugees and internally displaced people would be addressed.

Agar said the agreement was supposed to have been signed this month but was “nullified” by the TMC after the violence in Khartoum last week, when soldiers of the Rapid Support Forces shot and killed civilian protesters.

More recently, he sent a delegation to Khartoum for the first time since 2011. But last week his colleagues, including leading SPLM-N figure Yasir Arman – who had returned from years in exile to conduct the talks – were arrested in the capital. They were released on Monday and deported “against their will” to the South Sudanese capital, Juba, according to a statement released by the movement.

TNH reached out several times to the Transitional Military Council for comment but received no response.

During the celebration of Agar’s arrival in Ulu town, his first to the area since the internal split in 2017, calls for peace were laced with defiance.

“We’re not going to put down the guns until we have peace, freedom, and justice,” said Ahmed Elomdah Badi, the rebel army’s chief-of-staff. Agar said at least 7,000 rebel soldiers are training under his command in Blue Nile.

Some within al-Hilul’s faction warned against negotiating with Khartoum before the SPLM-N mends the fissures within its own movement.

“For true peace to prevail, the next government in Khartoum needs to engage in genuine dialogue that addresses the grievances of the people from the marginalised regions.”

“Those who haven’t signed the agreement [al-Hilul’s forces] will block Agar’s people from going home [from refugee camps or internal displacement] and there will be fighting,” said Dafalla, a former youth leader on al-Hilul’s side. TNH is only using his first name to protect his identity.

Analysts caution that a unilateral negotiation between Agar and the TMC could “prove problematic”, said Tom Rhodes, a researcher based in East Africa who spent time as a journalist in South Kordofan. “We could see a situation where people from the Two Areas are misrepresented both nationally and internationally.” 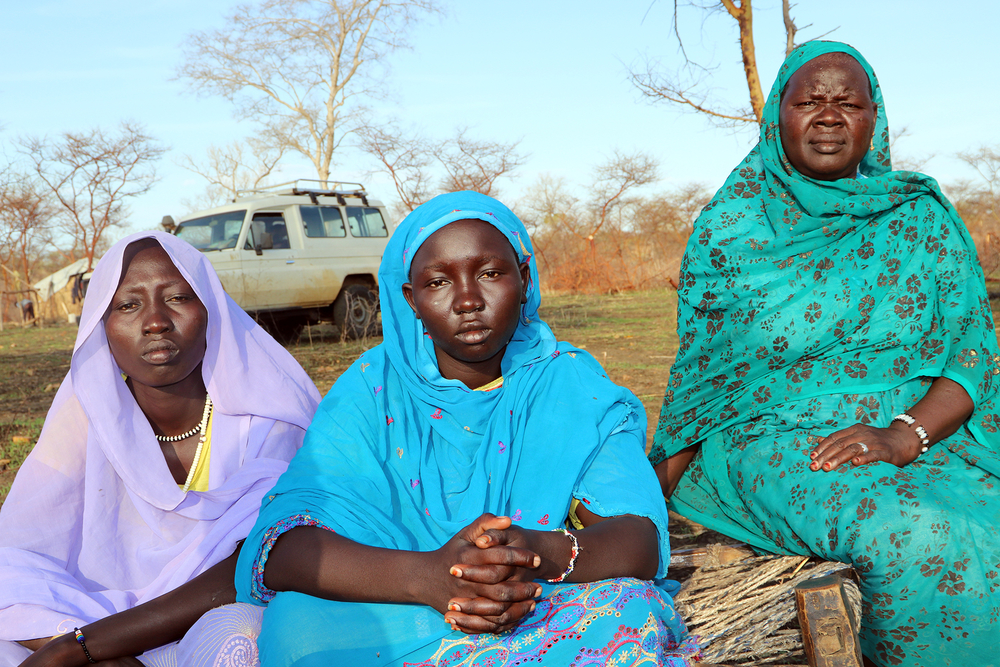 Sam Mednick/TNH
Displaced women sitting on a bed in South Ulu village in Blue Nile state. They all lost people in their families when fighting broke out within the SPLM-N in 2017 and say they're struggling to survive.

There is, nevertheless, an opportunity for Khartoum – if willing – to resolve the deep historical frustrations of the various communities from Sudan’s peripheries, including Blue Nile, South Kordofan’s Nuba Mountains, Darfur, and West Kordofan.

“For true peace to prevail, the next government in Khartoum needs to engage in genuine dialogue that addresses the grievances of the people from the marginalised regions,” said one political analyst who didn’t want to be named to avoid offending the government.

But Blue Nile demonstrates how complicated that could be. Three armed groups now vie for power. Approximately 36,000 people live under Agar’s control, the majority in Bau, one of three counties under his command. Sudan’s army and al-Hilul’s men occupy the other three counties – home to roughly 44,000 civilians.

On a trip to Bau County earlier this month, TNH met with dozens of internally displaced people all struggling to survive.

“We’re suffering,” said Noor Faki seated on a bed in his front yard. Three months ago he sold his remaining six goats in exchange for food to smugglers who entered illegally from northern Sudan. 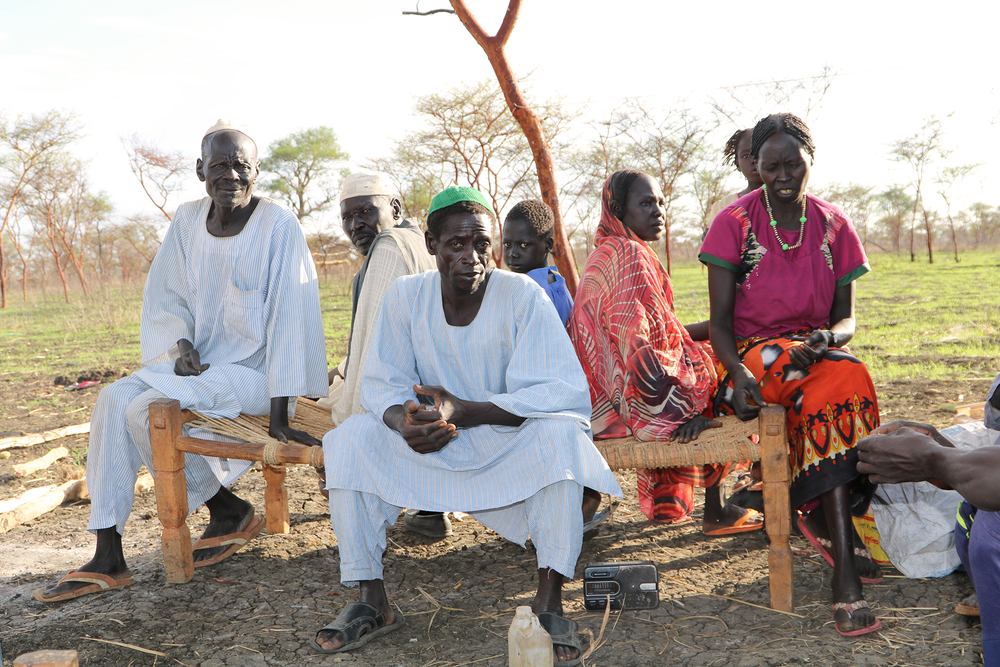 Sam Mednick/TNH
Noor Faki sits on a bed in his yard with his neighbours in South Ulu village.

Before the 2017 split the 44-year-old father could move freely to other parts of the state under SPLA-N control, but now he’s more restricted – unable to travel to areas occupied by al-Hilul, he said. In order to buy and sell goods he walks hours to meet the smugglers and is escorted by armed men in case of an ambush.

Lack of movement has affected his family. Perched on the edge of the bed beside him, Faki’s wife, Bamia Algoom, meticulously weaves a basket out of palm leaves.

A few years ago the 35-year-old could exchange her handwoven baskets for salt, sugar, and coffee at the market. Since the split she can only produce half as many baskets because most of the palm leaves are in Yabus town in Kurmuk County, now under rival control. Instead of creating eight baskets a month, she now makes four, making it harder to buy enough food to sustain her family.

Compounding the restricted access is the extreme lack of services. Several thousand people in South Ulu rely on one working borehole. Women spend all day waiting for water or fetch it in the middle of the night to avoid the lines.

When fighting broke out in the area in 2017, many boreholes were damaged and they are still in need of repair, said Ahmed Mattar, secretary of the board for the Sudan Relief and Rehabilitation Agency. Out of an estimated 36 boreholes in Bau County, approximately five are functioning, Mattar said.

Health is also a concern. The only medical clinic in the area has one trained doctor and a handful of midwives. Patients with severe problems have to travel 80 kilometres across the border to seek help in a refugee camp in South Sudan, and there’s often no way to transport them, said Sidieq Khalil, the one doctor on staff.

With the onset of the rainy season, Khalil worries about increasing rates of malaria as well as access to medicine. Between October and January, 80 to 100 people came to the clinic daily with malaria. Five people died from the disease, three of them children, he said. Currently, there’s only enough malaria medicine to last for one month.

When fighting began in 2011, Sudan’s government cut off all assistance to South Kordofan and Blue Nile. While the situation was bad, locals recall how some aid groups, operating discreetly, still distributed oil, seeds, and tools, making life slightly easier. Since the split in 2017, however, the few organisations present have ceased to operate.

The Funj Youth Development Association, a local aid group, worked in Blue Nile between 2013 and 2017, defying Khartoum with the help of an international organisation, said Elsadig Hassan Gumbo, its logistics coordinator.

“We want our children to only see military men and hear the sound of guns in the movies.”

But after the SPLM-N split, the international group pulled out citing security concerns and a cut in funding from donors. Gumbo keeps asking the international community to step in. “We send many messages,” he said. “Just help! We’re asking for help.”

TNH reached out to three aid groups that had previously operated or still work in other parts of Blue Nile not under Agar’s control and either received no response or was told they couldn’t speak to the media about their initiatives.

The United States, the largest donor to Sudan, remains “concerned about the situation” in the Two Areas, and since 2018 it has provided nearly $339 million in humanitarian assistance, including to Blue Nile, a USAID official said. More than $23 million in 2019 is going towards South Kordofan and Blue Nile, as well as other troublespots Abyei and West Kordofan, according to a USAID fact sheet.

Civilians’ futures are dependent on what transpires in Khartoum, and many stand with the protestors in wanting the generals to hand over power.

“We don’t want to see anyone in military uniform,” said Nefisa, deputy chairman for one of four refugee camps in Maban, a South Sudanese town where almost 150,000 refugees from Blue Nile are sheltering. “We want our children to only see military men and hear the sound of guns in the movies.”

(TOP PHOTO: Soldiers hop into the back of a truck on their way to celebrate the arrival of rebel leader Malik Agar who came to Ulu for the first time since fighting erupted within the movement in 2017.)