In violence reminiscent of some of the worst moments of former president Omar al-Bashir’s 30-year regime, scores of protesters are said to have been killed in attacks reportedly linked to the Rapid Support Forces, a paramilitary group born out of the Janjaweed – the militia tied to atrocities during the 2003 Darfur conflict.

Since al-Bashir was forced from power in April, thousands of protesters have continued to rally for civilian rule and a new future for Sudan, but were met with a deadly response in the capital, Khartoum, on Monday.

The Central Committee of Sudanese Doctors, a grouping of medical professionals that has supported the protests, said at least 108 people were killed and 500 wounded, while the country’s new rulers – the Transitional Military Council – had raised its death toll to 61. An eight-year-old was among those killed, according to a doctor who asked not to be named out of fear of reprisals from security forces.

The United Nations said it planned on pulling non-critical staff out of the country following the violence.

Although Sudan’s ruling military junta has promised elections within nine months, the African Union – in the wake of Monday’s attacks – has suspended Sudan’s membership until a civilian-led transitional council is appointed.

Heavily armed troops with rocket-propelled grenades continue to patrol the streets of Khartoum. Some have been seen whipping people in the streets and standing guard outside buildings used by al-Bashir’s regime, according to several witnesses who spoke on condition of anonymity because of the security situation. 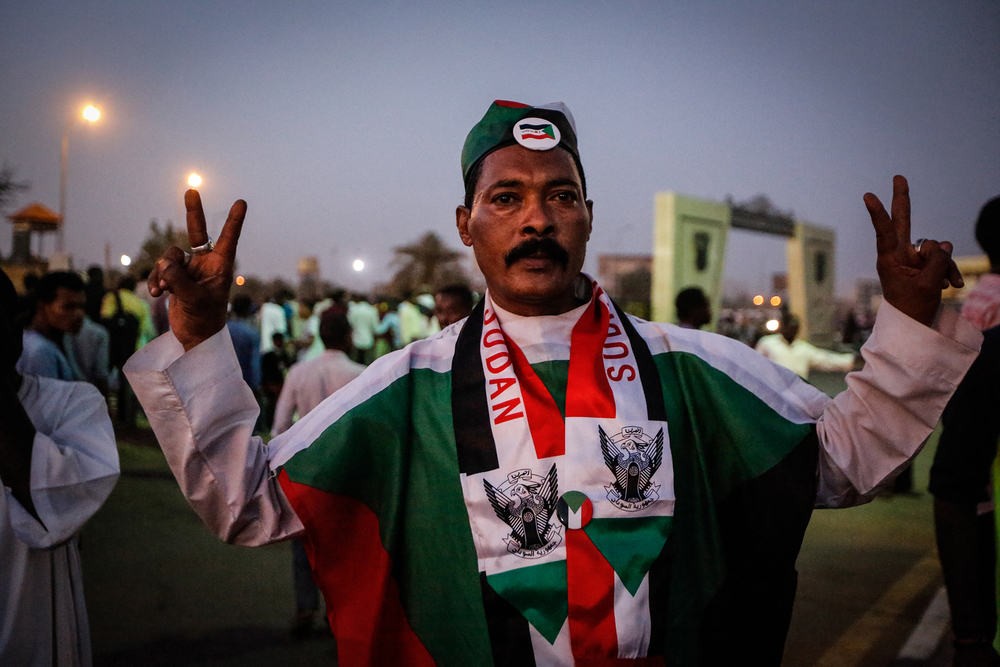 Sara Creta/TNH
Thousands of Sudanese pro-democracy protesters remained defiant of the country's military rulers and asked for a democratic transition.

Even if the protesters and the military junta reach an agreement in the coming days, rebuilding the country could take decades. Al-Bashir’s regime crippled civil society, labour unions, the press, and religious freedoms.

The country is also in dire need of humanitarian assistance, with more than five million people – half of them children – in need, and millions of displaced people now living around Khartoum. Fighting has also continued in Darfur, South Kordofan, and Blue Nile despite the military council declaring a ceasefire in all three restive regions in April.

What happened in Khartoum?

RSF forces – linked to systematic human rights abuses in Darfur and other regions – reportedly opened fire on Monday during a protest in front of the Ministry of Defence.

Bodies were reportedly dumped in the Nile with bricks tied to their feet.

Nazim Sirag, a 38-year-old activist, confirmed that nine of them – six men and three women – were found in one location alone while other bodies were scattered. Doctors at the Ibrahim Malik Hospital also reported widespread killings, and the Sudan Doctors Committee, a professional body for Sudanese doctors linked to the protestors, used Facebook to plead for more health workers to help staff the hospital. Even during peaceful times, the healthcare system in Khartoum has struggled to meet needs.

While attacks were taking place on Monday, there were also at least five reported rapes – two were female doctors while the others were protesters. Doctors said they were struggling to provide post-rape care including medication to prevent HIV and emergency contraception. Although it was unclear who may have raped the victims, rape has been used as a weapon of war, often by government forces and the Janjaweed militia.

“One of them was very aggressive with me,” said a student from Sudan University who asked to remain anonymous out of security concerns. “He whipped me on my back and kept telling me I was not from Sudan.”

“They were firing randomly. They didn’t care about anyone.”

Another protester described a coordinated attack with forces arriving from multiple directions. He said the RSF blocked people from trying to flee.

“They were firing randomly,” said the 25-year-old protester, also speaking anonymously for fear there could be reprisals. “They didn’t care about anyone. We were trying to find the support from the army, but they [RSF] managed to block the door [at the military compound] and we couldn’t get inside. There were young officers from the army who tried to help the protesters, but they were beaten by the Rapid Support Forces. They were not carrying any guns.”

Unlike the RSF forces, the Army – many of whom are young and have sympathised with the protesters – has moved to protect protesters on several occasions.

What do the protesters want?

“We want a civilian government,” said Hadia Hasaballa, a professor at Alafad Girls University of Omdurman who said she had been detained several times since December. “We will not be silenced again… We don’t want more corruption and tyranny.” 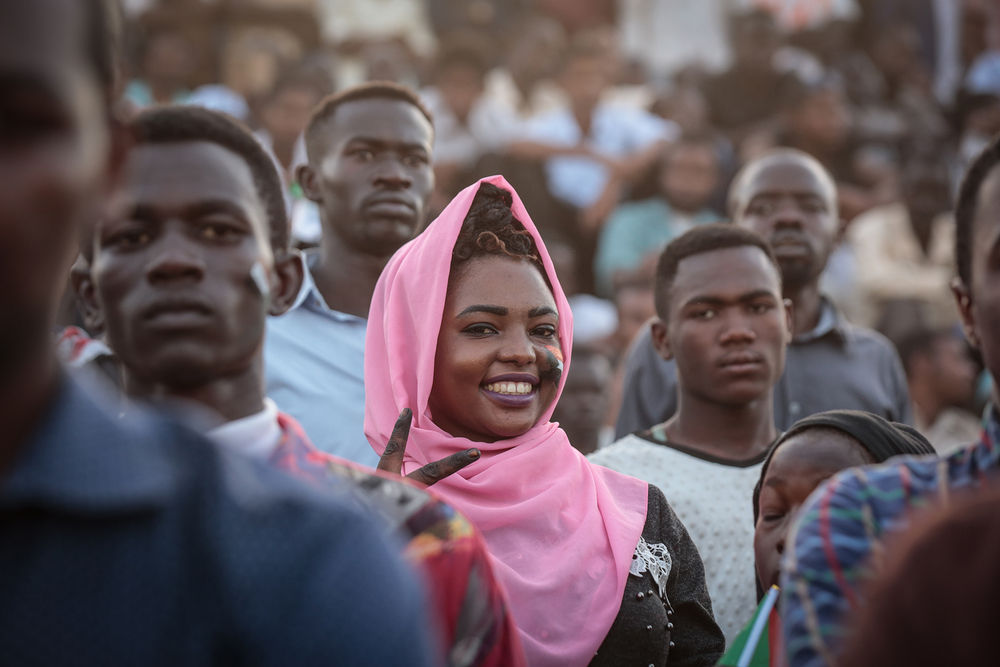 Sara Creta/TNH
Women activists are asking for a decisive role in the political democratic processes.

Sudanese women have been at the forefront of the demonstrations, fighting against repressive laws against women. Some also want equal political participation.

The protesters have also demanded that those behind Monday’s attacks be brought to justice, and for al-Bashir to face prosecution. Al-Bashir is wanted by the International Criminal Court on a raft of charges relating to acts – including murder, rape, and torture – committed by Sudanese troops in Darfur between 2003 and 2008.

Protesters, organised by the Sudanese Professionals Association and united under the banner of the “Forces for Freedom and Change,” have been asking for the formation of a National Transitional Government.

What is the international community doing?

Sudan is a strategic country for the international community.

China, backed by Russia, blocked a bid at the UN Security Council on Tuesday to condemn the killing of civilians and to end the violence.

"What is clear to us is that there was use of excessive force by the security forces on civilians," said Stephane Dujarric, a UN spokesman.

Agnès Callamard, the Special Rapporteur on extrajudicial, summary or arbitrary executions at the Office of the United Nations High Commissioner for Human Rights, took to Twitter to call for stronger action against the military junta.

The African Union said Sudan’s membership would be suspended “until the effective establishment of a civilian-led transitional authority.” The AU announcement followed an emergency meeting in Ethiopia. 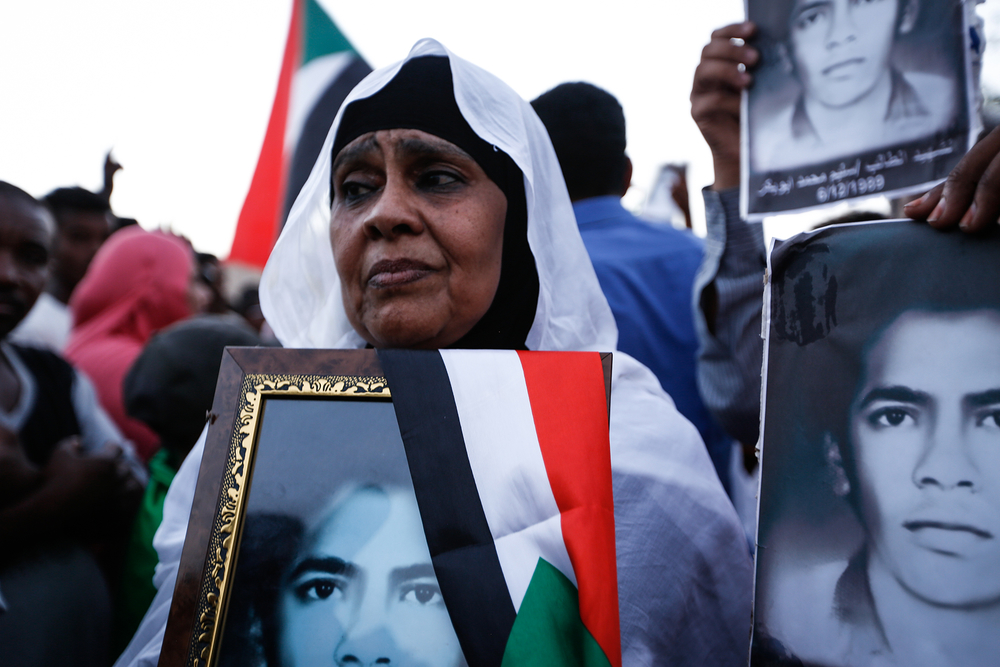 Sara Creta/MSF
Protesters are demanding civilian rule but also want justice for those killed under Omar al-Bashir’s 30-year regime, a period marked by years of atrocities that led to al-Bashir’s arrest warrant from the International Criminal Court.

The protesters, however, rejected the offer.

Protesters are being urged by organisers to block main roads and bridges in retaliation for the military's crackdown. Organizers have been using text messages and Facebook to mobilise protesters.

Dagalo, who recently returned from Saudi Arabia, has become the interim vice-president since al-Bashir was ousted and arrested. Although al-Burhan heads the transitional council, many fear Dagalo has bigger political intentions.

Upon his return, Degalo announced Sudanese forces would remain in Yemen – one of the world’s worst humanitarian crises – to continue supporting Saudi and Emirati forces.

(TOP PHOTO: Sudanese protesters rally in front of the military headquarters in the capital Khartoum during a demonstration demanding a civilian transition government.)