The World Food Programme is investigating how up to 50,000 tonnes of nutrition-boosting porridge mix it purchased for distribution to nursing mothers and malnourished children in Somalia, Yemen, Bangladesh, and elsewhere was of substandard quality, despite its quality inspection process.

The UN agency said it became aware of concerns over quality when one sample was tested in June 2018 for unrelated reasons, according to a statement issued on 11 February.

WFP then initiated laboratory tests across other shipments of the porridge mix, branded as 'Super Cereal', which it “suspected of being below optimal standard”, a spokesperson for the agency said. The product was found to be low in protein and fat, with one batch containing 27 percent less protein than required. The product is safe to eat, the WFP noted.

Independent nutritionists confirmed to IRIN the product would be safe to eat but said lower protein content – likely the result of an insufficient amount of soybeans – meant the supplement wouldn’t have the intended curative or preventative effects.

Super Cereal can support the nutritional needs of nursing and pregnant women and can be used in school feeding programmes. It is also used to help prevent or reduce moderate acute malnutrition among under-fives, according to Patrick Webb, a professor at the Friedman School of Nutrition at Tufts University, and former head of nutrition at WFP.

These are “important food items that need to be produced to the highest standards in order to achieve intended impacts,” Webb said.

The agency declined to confirm which of its suppliers is under investigation by its Office of the Inspector General. A spokesperson said investigators are determining if “operational error, negligence, or fraudulent behaviour” are at fault.

WFP noted that it continues to issue millions of dollars in new contracts to the firm in question because there is a “limited pool” of suppliers of the product.

In an emailed statement, the agency said it had put in place special measures: “WFP has issued contracts to the company for Super Cereal Plus under a new regime with intensified compliance and monitoring measures including more checks during the process, and daily reports from the company and from the inspection company.” Super Cereal Plus is an enriched version of Super Cereal and made up one third of the suspect 50,000 tonnes, according to WFP.

Exacting quality standards, unpredictable contracts, and slim profit margins lead to little competition and incentives amongst manufacturers of the product, Webb noted. This means that “substandard practice rarely gets punished,” he said, as “there’s no one else to go to”.

He said the market for such supplements “had a history of challenges, in large part because these are not run-of-the-mill items. They are specially designed nutritionally enhanced food products.”

In addition to stringent production guidelines, Super Cereal requires careful storage and handling, is prone to damage from moisture, and has a relatively short shelf life, according to several aid officials. One said it’s “quite hard to handle in the field”. WFP reported less than one percent of post-delivery losses for any reason.

In 2017, WFP purchased 247,000 tonnes of Super Cereal, out of three million metric tonnes of food it bought overall. WFP declined to give a costing of the 50,000 tonnes now under investigation. But based on estimates from another purchaser, who asked to remain anonymous, IRIN estimates the cost to be more than $30 million (excluding transport and shipping).

Since the product was safe for consumption, WFP said it had revised distribution plans to make some use of it, for example in “general food distributions rather than in malnutrition treatment programmes”.

The porridge mix was distributed to “many countries”, WFP noted, refraining from citing specific countries because of the ongoing investigation.

The investigation is not without precedent. In 2017 WFP’s inspector general investigated fraud involving “submission of inaccurate or forged inspection certificates” by suppliers in Turkey.

Webb said quality control issues were often caused by a problem in the manufacturing process, not bad intentions. “Something accidentally ends up in the wrong hopper,” he explained.

Only a handful of other aid agencies purchase Super Cereal; most international NGOs that distribute the product get it as a donation in kind from WFP’s donor-funded supply or from USAID. 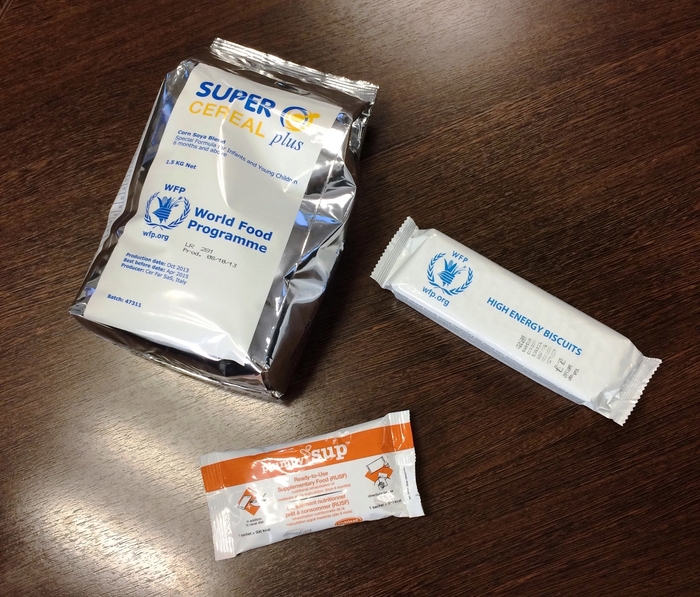 US Mission to the UN Rome

A food aid expert, who requested anonymity due to work relationships, said WFP’s quality control systems were now “quite robust”.

WFP relies on third-party inspectors to take samples from every purchase order at the manufacturer, which are then examined and sent to laboratories for testing.

According to WFP’s procurement web pages, the agency “appoints an independent third-party inspection company to verify that consignments conform to contractual terms.”

Two European producers dominate the market for supplying WFP with Super Cereal: Belgium-based Michiels Fabrieken and CER.FAR SaS of Italy. Public documents show that each was awarded Super Cereal contracts worth about $60 million in 2018, and together they commanded about 80 percent of the value of WFP contracts for the product.

A spokesperson for Michiels Fabrieken denied the company was under investigation by WFP when asked by IRIN. The CEO of the other, CER.FAR SaS of Italy, declined to comment.

According to a businessperson familiar with the sector, the two manufacturers have “wiped out all other competition.”

The businessperson, who spoke anonymously due to the sensitive business relationships involved, said other producers have been unable to maintain the quality standards and price points demanded by WFP.

WFP is actively trying to diversify its suppliers and has contracted smaller batches of Super Cereal from companies, including in South Africa and Turkey, according to WFP’s public records.

While WFP issued a public statement on 11 February, the issue was not raised in a working group devoted specifically to the use of food mixes and supplements last year, according to minutes of its September meeting. WFP told IRIN on 4 February that it had contacted “partners and stakeholders where this is operationally relevant”.