As many as 200,000 people could flee renewed fighting in southwest Syria and end up stranded along the closed border with Jordan, according to the worst-case scenario envisioned in UN documents outlining emergency plans for a brewing humanitarian crisis.

Having secured the centre of the country, including key pockets of resistance in the Damascus suburbs, the Syrian government has set its sights on rebel-held parts of southern Syria, including the city of Daraa, which lies on a strategic artery to Jordan. This part of Syria has been calm for the past year thanks to an internationally brokered ceasefire, but as many as 25,000 people have taken flight since a government offensive, backed by Russian airstrikes, began 16 June.

Not only is the assault likely to displace hundreds of thousands of civilians but, according to internal UN documents shared with IRIN, it may also cut informal trade routes within Syria and interrupt imports from Jordan, making it harder for people to get food and other basic supplies.

The EU has warned of the potentially “devastating” humanitarian consequences of an all-out offensive, and the UN’s top official in Jordan, humanitarian coordinator Anders Pedersen, told IRIN that the world body is “very worried about what’s now happening and about the number of displaced people already”.

Jordan closed the door to the vast majority of refugees after a suicide car bombing on its borders in June 2016. The concern now is that a new exodus of displaced civilians from around Daraa, some of whom are already nearing the desert frontier, will have no safe place to go. Ayman Safadi, the foreign minister of Jordan, which hosts 660,000 registered Syrian refugees, said on Twitter this weekend that the country “can’t host more”. 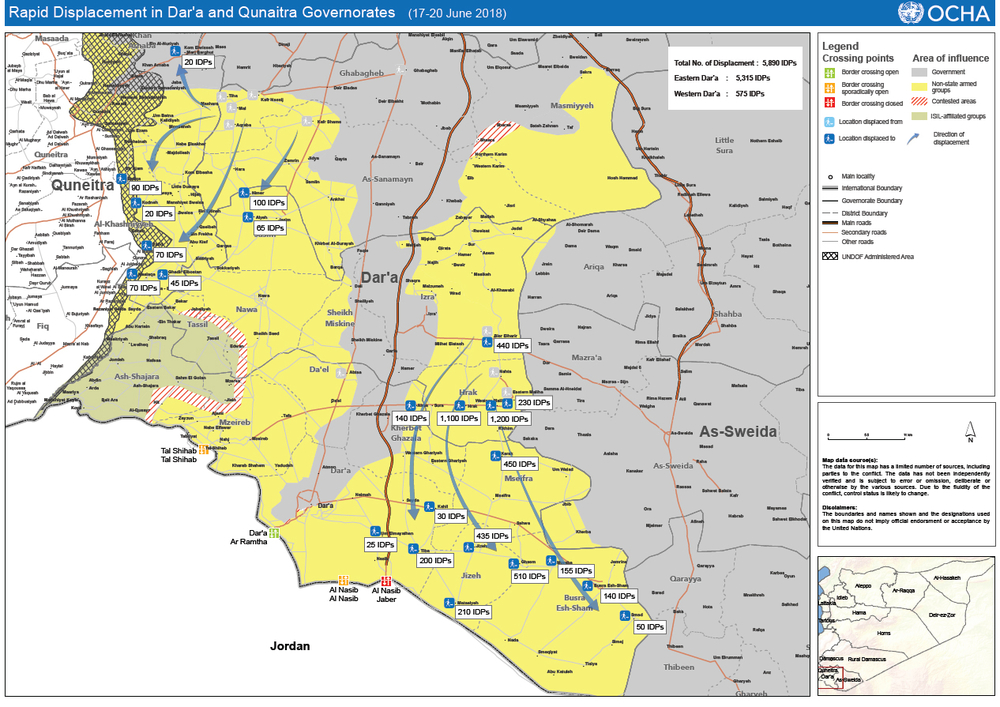 One of the UN documents seen by IRIN, shared by sources concerned about the risks to civilians if Jordan remains sealed off, raises the possibility that those displaced by the new offensive could end up in a similar situation to some 50,000 Syrians already stuck along the harsh desert no-man’s-land on the Syria-Jordan border known as the “berm”.

They are sheltering in an informal camp near Rukban (250 kilometres northeast of Daraa city, as the crow flies) because they were refused entry to Jordan as refugees. The Rukban camp houses fighters and criminal gangs as well as civilians, and is sandwiched between sand mounds “or berms” that mark the north and south of the Jordan-Syria border.

There have been several attacks near the berm since the June 2016 bombing that killed six Jordanian troops, and the kingdom insists its security depends on keeping the border as closed as possible. The only aid permitted to reach the berm from Jordan largely consists of a limited supply of water, an outpatient clinic, and occasional shipments of food delivered by crane.

Aid workers are not permitted to go into Rukban, and delivery of aid has been outsourced to contractors and, at times, armed groups.

In the UN’s worst-case scenario, not only would the new offensive create a larger spontaneous desert camp up against the borderline, but it could be within an area of active air and land conflict.

UN sources told IRIN they are frustrated with their lack of leverage in challenging Jordan’s insistence that maintaining security means limiting aid, and are frustrated by the apparent lack of Western lobbying in favour of international humanitarian law.

Jordan is not a signatory to the 1951 Refugee Convention, but if states cannot provide for civilians they are required to allow unhindered humanitarian access. Jordan has long insisted aid deliveries to the berm should be be made from inside Syria.

The UN’s Pedersen said he has reiterated “again and again and again” to Jordan that the UN has an imperative to “adhere to humanitarian principles and international law”.

Preparing for the worst

Aid to rebel-held territories in Syria is delivered via cross-border convoys from Turkey and Jordan, while aid to government-held areas comes from Damascus.

Aid agencies have tried to prepare for the offensive by stockpiling food and medical supplies in rebel-controlled areas in Syria. But such warehousing carries its own risks, and one aid worker familiar with cross-border operations in Syria said there was a limit to the value of pre-positioning. “Looting will happen, diversion will happen, bombing will happen – [but] maybe one part will be saved,” the worker said.

A senior UN official familiar with the Jordan and Syria aid operation, who asked to remain anonymous, said the re-routing of goods, such as food, was less of a concern than the potential disruption in healthcare and the risks to personal safety.

Fears include retribution by Syrian security forces against people in rebel areas. If the deliveries of goods aren’t combined with continuing efforts to prevent harm and abuses, “it’s just a ‘truck and chuck’ operation”, the official said.

According to OCHA, the UN’s emergency aid coordination body, the movement of people from the south to and from government-controlled territory is already increasingly restricted, resulting in price rises for civilians.

The cost of cooking fuel has jumped: cylinders used in rebel-held areas must be refilled in government areas. Some landlords in opposition territory have immediately responded to increased demand from displaced people by demanding three months rent up front and hiking prices by up to 60 percent, according to OCHA. 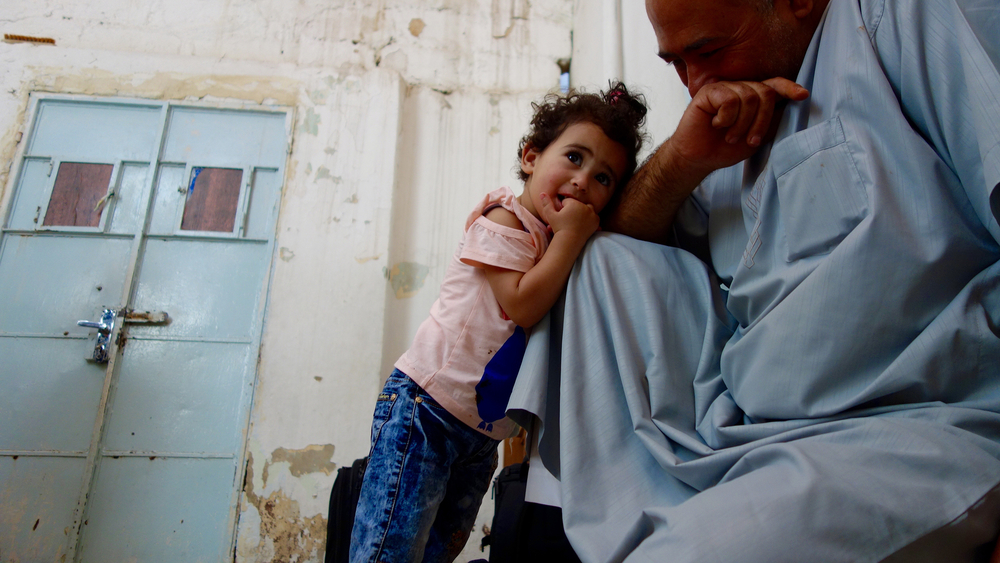 Ben Parker/IRIN
Father and daughter (the family requested anonymity) in a Syrian family from Homs living as refugees in rented housing in Mafraq, northern Jordan. Over 160,000 Syrian refugees live in Mafraq Governorate in northern Jordan. 18 June 2018

The risk to civilians depends in part on what sort of resistance rebels in the south put up. The eastern side of Daraa city is under partial rebel control, as are areas on either side of the north-south highway.

But the rebel-held areas are already nearly split in two by government-held territory, linked only by a two-kilometre strip of land near the Jordanian border. Sam Heller, co-author of a new policy paper on the conflict by the International Crisis Group, told IRIN that the southern rebel territories are “extremely vulnerable to being cut into smaller pieces”.

The “enclaving” operation likely underway by the Syrian forces could result in four or more distinct pockets of rebel control, which would be much more “digestible” militarily, from the Syrian government’s point of view, according to Heller.

This scenario – divide and besiege – is one the UN and international NGOs have foreseen in a document that sets up four scenarios for the future of southern Syria.

First, it described the status quo: a continued ceasefire and commercial and humanitarian access from Jordan. The second scenario foresees ground offensives that lead to extensive displacement and deprivation in multiple enclaves. The third considers a less violent scenario: negotiated transfer of control of rebel-held territories back to the government. A fourth considers the impact of a complete closure of the border with Jordan.

Russian and Syrian tactics to recapture Eastern Aleppo and Eastern Ghouta followed a pattern: densely-populated rebel pockets were besieged and subjected to heavy and indiscriminate bombardment. At the final stages, rebels and civilians could choose to hand themselves over to government control or move across the country to rebel-controlled northwestern areas.

Such transfers seem less likely in the south, the planning document suggests, projecting that – under any peaceful transition scenario – only 15,000 people would be transferred to the northwestern governorate of Idlib, where many residents from recaptured rebel areas have taken shelter.

Jordan has considerable influence over insurgent groups in southern Syria and may be influential in steering these non-violent transfers of power, according to the International Crisis Group paper: “Keeping the Calm in Southern Syria”.

Heller, like Pedersen, said Jordan remains “extremely concerned” about its border security and the prospect of a new wave of asylum seekers.

One scenario the UN has not played out, at least in documents seen by IRIN, is the possibility that Syrians head en masse towards the Israeli-occupied Golan Heights, although Israel is reportedly bracing for an uptick in fighting near its border.

(TOP PHOTO: Displaced Syrians from the Daraa province fleeing shelling wait in a makeshift camp in the province of Quneitra, southwestern Syria, on June 22, 2018.)