The bomb was as enormous as the flecks of torn skin smudging the ground are miniscule. Entire overcrowded buses were blown up, every passenger killed. No one in the vicinity was spared: shopkeepers at the side of the road selling khat; office managers; children fooling around or running errands for parents; a medical student about to graduate; mothers; fathers; sisters; brothers.

At approximately 3:30 on Saturday afternoon, a truck bomb was detonated in the middle of the traffic in Mogadishu's Hodan district, next to the landmark Safari hotel, frequented by politicians and other Somali movers and shakers.

Later in the day, a second explosion was reported in the city's Madina district.

When the Hodan bomb went off, near the busy K5 roundabout, Somalis on social media reported it as the loudest explosion they'd ever heard – a feat in itself in a city that's been used to violence for more than two decades.

The bodycount started in the dozens, but soon started to climb, hitting 85, then more than 100. Now the death toll is officially up to 276 people.

It is expected to reach more than 300, said Mohamed Moalim, permanent secretary in the government’s Ministry of Humanitarian Affairs and Disaster Management. Hundreds more have been injured.

"We still have a number of bodies not identified, hundreds of families wanting to identify loved ones, but it’s happening slowly because of the size of the situation,” he told IRIN via Skype. Many of the bodies are charred beyond recognition.

"When you see the area and location, you will [understand the extent of the damage]," said Farah Bashir, managing director of Galayr Consultancy, referring to the bustling commercial district, with many shops, hotels, and businesses.

He wasn't at the office when the explosion happened, but he heard the blast and arrived to find complete destruction, with shattered buildings and people trapped under rubble.

"The blood of the victims, burned pieces of human bodies,” said Bashir. “No doors, windows, curtains, walls – all [destoyed] and demolished.”

The city’s two largest hospitals, Medina and Turkish-supported Digfer, are entirely overwhelmed. There aren't nearly enough doctors and nurses to tend to everyone. Medical students are volunteering, but supplies are low.

"We need food, water, emergency equipment, beds, sheets, antibiotics," said Moalim. The UN and international NGOs are mobilising, but none were immediately on the ground, he noted.

African Union troops, known as AMISOM, have been providing security and services in the clean-up, and the Turkish government is sending ambulance planes expected to land today. 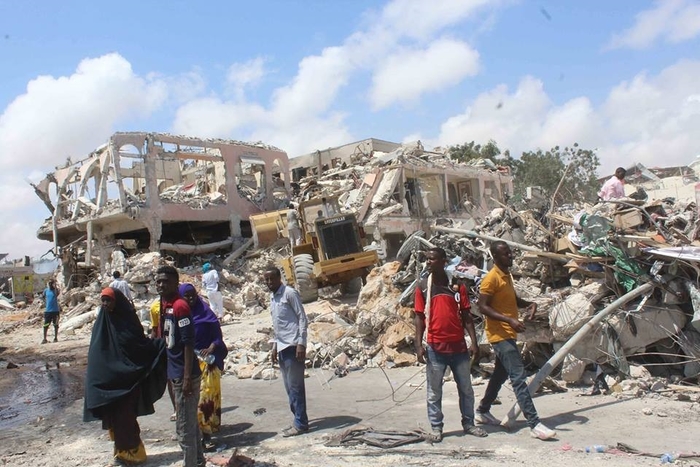 Hassan Istiila/IRIN
Aftermath of the bombing

Al-Shabab on the march?

As of yet, no group has claimed responsibility for the bombing, but it bears all the hallmarks of the jihadist group al-Shabab, at war with successive governments and their international backers since 2006.

They have staged repeated attacks in Mogadishu, but nothing close to the scale of Saturday’s carnage. Previously the worst attack was in June when 30 people died in the bombing of a popular pizza restaurant.

“They won’t claim responsibility because of the massive civilian deaths, but this was definitely an al-Shabab operation,” said Rashid Abdi, Horn of Africa director at the International Crisis Group.

“Why they’ve done it is because they had the opportunity to do it,” he told IRIN.

The security forces have suffered a series of setbacks over the last few months. They have withdrawn from the key Lower Shabelle region as a result of al-Shabab attacks, and there are rising tensions and low morale within the fledgling Somali National Army.

The Somali army is being retrained and built up so it can take over security once AMISOM troops start withdrawing next year, but reforms have been slow.

The recent military setbacks have allowed al-Shabab “to gain a corridor to infiltrate Mogadishu,” said Abdi. “This is a serious lapse in security, or collusion.”

The truck carrying the explosives was believed to have been waived through the numerous checkpoints along the Afgooye road into the city, although the government says it was being followed before it detonated.

The attack has generated universal revulsion, with Mogadishu residents taking to the streets to demonstrate their outrage. Hundreds more have lined up to donate blood.

"I'm feeling very sad," said Bashir. "You can't identify and you can't know and you can't analyse the loss of [so many] innocent people who were just doing business around the area."

The shock of Saturday’s attack has been likened to the impact of al-Shabab’s 2009 bombing of a medical school graduation that killed 19 people, which was widely condemned and hurt the group’s standing inside Somalia.

“We’re beginning to see a groundswell of public resentment, but whether this will translate into support for the government is hard to tell,” said Abdi.

Farmajo was elected in February by a landslide, but has struggled to bridge the deep divide between the central government and the six federal states over powers and authority, which is hobbling his administration.

The divisions have been exacerbated by the Gulf crisis between the Saudi Arabia and United Arab Emirates-led coalition, versus a diplomatically isolated Qatar.

Farmajo is seen to side with Qatar, while the cash-strapped Somali states have chosen Riyadh and Abu Dhabi – who are looking for bases in Somalia for their military intervention in neighbouring Yemen.

Al-Shabab may have been trying to take advantage of the government’s weakness, but it is unclear how things will now play out. “This [attack] could throw the government a lifeline in terms of public support, but it could tip the other way if it’s mishandled,” said Abdi.