Aid groups in Yemen are warning that an impending assault by a Saudi Arabia-led coalition on the rebel-held western port of Hodeida could tip the country into famine.

“It would be catastrophic, and the impact would be felt immediately,” said Caroline Anning of Save the Children. “Hodeida is one of seven provinces already on the brink of famine, and an attack could trigger it.”

The port, in the hands of Houthi rebels, normally handles more than 70 percent of all Yemen’s imported goods, including aid, food and fuel. Airstrikes in 2015 damaged four of the port’s five cranes, reducing capacity, but Hodeida remains the country’s lifeline.

“There is no viable alternative,” Anning told IRIN. “[Trucking aid] overland, airlifting, using other ports – there is nothing else that would be able to fill the current gap.”

Aid and human rights groups are ringing the alarm as a donor conference on Yemen opened in Geneva today, with the UN urging action to tackle what it describes as the world’s worst humanitarian crisis.

More than 17 million Yemenis are short of food out of a population of 27 million, with close to seven million on the brink of starvation. The UN has appealed for $2.1 billion for this year, and by the end of Tuesday has received $1.1 billion in pledges.

The coalition and the US government accuse Iran of arming the rebels, a charge Tehran denies. Hodeida is near the Bab al-Mandab strait, a choke point through which nearly four million barrels of oil pass daily. Both Riyadh and Washington regard Iran as a strategic threat to the waterway.

Hodeida is one of two remaining ports on Yemen’s Red Sea coast under Houthi control. Capturing it would deprive the rebels of the taxes they levy on imports, but is an operation that would be unlikely to be surgical or quick.

An attack on Hodeida would halt aid operations at a desperate time for Yemen, and would have an immediate impact on the population of the densely-packed city.

“Any military campaign in its vicinity, from the ground or air, would have devastating civilian consequences,” the Yemen UN Country Team warned in a statement. 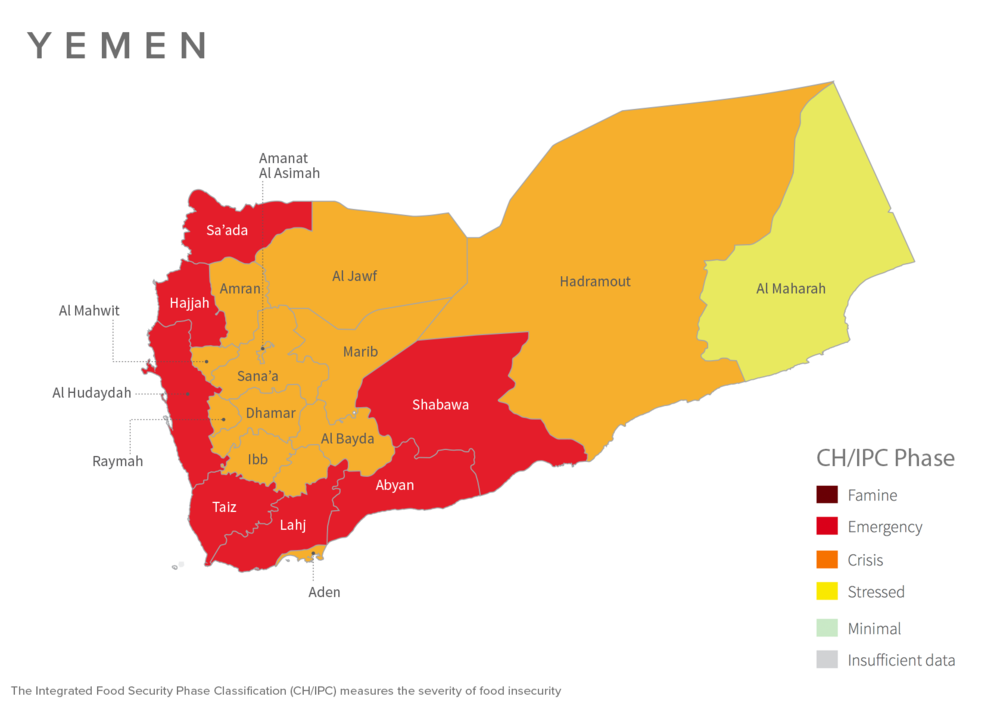 Already, aid blockages mean agencies cannot keep pace with needs. According to the International Rescue Committee, it currently can take six months to get life-saving medical supplies from outside the country into health facilities in Yemen.

“Sea and air blockades that are already in place mean essential humanitarian supplies in Yemen are scarce, and will become even scarcer if these attacks go ahead,” the relief agency said.

All vessels carrying humanitarian cargo are inspected at sea by coalition forces. Commercial shipments to Yemen’s western ports are subject to a UN Verification and Inspection Mechanism to ensure enforcement of a Security Council arms embargo.

The inability to offload new cranes to replace the damaged ones in Hodeida is an example of the impact of the current restrictions.

According to the UN’s special rapporteur on human rights and international sanctions, Idriss Jazairy, the blockade and long clearance procedure “involves grave breaches of the most basic norms of human rights law, as well as of the law of armed conflict”.

Saudi concerns over the monitoring of cargo, ostensibly aimed at preventing weapons reaching the rebels, could be achieved by strengthening and expanding the current UN verification mechanism, or bringing Hodeida under third-party management, possibly a UN agency.

“That would depoliticise the process and keep what is a lifeline for northern Yemen open,” said one aid official, who asked not to be named.

The military option seems to be top of the coalition’s list, with the port a key prize on the way to the Houthi held capital of Sana’a. But Oxfam has warned that if Hodeida is attacked, “the Saudi-led coalition will not only breach International Humanitarian Law, they will be complicit in near certain famine”.

An assault would probably happen before the holy month of Ramadan, due at the end of May, and would likely include Sudan’s Rapid Support Forces – better known as the “Janjaweed” militia.

The RSF are “shock troops”, with a long history of abuse against civilians, drawing complaints from even Sudan’s regular army. Several thousand have reportedly been sent to Yemen, according to a new Small Arms Survey report.

The Darfur-recruited militia are directly answerable to President Omar al-Bashir and the intelligence service.  “What we don’t know is how much control will be extended over the RSF [by the military commanders of coalition forces],” said Magnus Taylor of the International Crisis Group.

Saudi Arabia and the United Arab Emirates are believed to have provided Sudan with $2.2 billion in aid since 2015, as part of a political deal to “keep Khartoum afloat and in the coalition of Sunni states opposed to Iran”, said Taylor.

Although regular Sudanese troops are fighting and dying in Yemen, the RSF’s deployment is seen as a reward for the loyalty of their commander, Mohammed Hamdan ‘Hemmeti’, to al-Bashir. But that could turn sour if they become cannon fodder for the attack on Hodeida.

Yemen’s conflict has already claimed more than 10,000 lives. According to Amnesty International, all sides in the war “have carried out unlawful attacks that have killed or injured civilians and failed to distinguish between civilian objects and military objectives”. Both have blocked aid supplies.

Advocacy groups are warning that more aid is not enough to save Yemen from catastrophe. Amnesty has called on the international community to suspend transfers of military equipment to all parties to the conflict.

Oxfam has also urged the British government to “pressure all parties to the conflict to resume peace talks, to reach a negotiated peace agreement”.

It pointed out that while aid is desperately needed to save lives now, “many more people will die unless the de-facto blockade is lifted and major powers stop fuelling the conflict”.

TOP PHOTO: Aftermath of a coalition air strike in Yemen