As a young girl, Kasthuri Udayakumaran’s grandmother would tell her of a house where birds chirped as the morning sunlight streamed through the thick foliage of a peaceful village. It seemed like a fantasy, a world away from her home in the northern city of Jaffna where soldiers manned checkpoints and claymore mines exploded on dusty streets

The house was real: Udayakumaran’s family left it behind in 1990 when they fled the town of Tellipallai, about 30 km north of Jaffna, after the military confiscated their land. With a decades-long war now over and Sri Lanka’s new government backing a program to release land from military occupation, 18-year-old Udayakumaran and her family have been visiting their former home over the past month.

“We have been coming here every weekend to clear the land. We found our land, but our house has been totally destroyed,” she said, standing next to the wreckage with large trees growing up through the roofless structure.

Sri Lanka’s civil war erupted in the early 1980s when the Liberation Tigers of Tamil Eelam, or Tamil Tigers, began fighting for an independent homeland for the ethnic Tamil minority, which had suffered discrimination under the ethnic Sinhalese majority. The conflict finally ended in May 2009 with the defeat of the Tamil Tigers, but by then more than 100,000 people had been killed on both sides, most of them civilians.

Between 1990 and 2009, the military confiscated 11,629 acres in the northern tip of Sri Lanka – the Tamil heartland – to create the Palaly High Security Zone (HSZ). Residents of Tellipallai and other communities were evicted, but they were finally allowed to return in April this year when some land was released by the government of President Maithripala Sirisena.

His government hopes the land reform program will promote reconciliation with the mainly Tamil population in the north and east who suffered the brunt of decades of war.

A man burns debris in front of a destroyed house on land returned to civilians by the military in Tellipallai, northern Sri Lanka 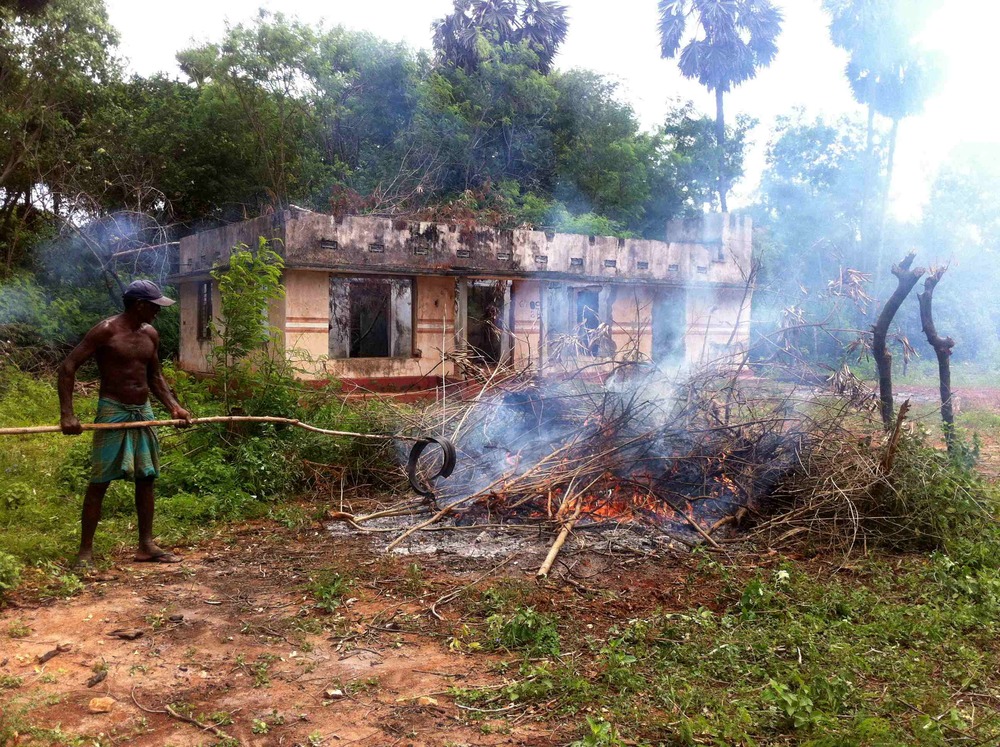 Sirisena took power in January, amid dissatisfaction with the previous government, which had been criticized for not sufficiently reaching out to the former rebels.

The land reform program began under the former government, but the new administration has sped up the process, according to Kabir Hashim, general secretary of Sirisena’s United National Party. The previous government released only 5,255 acres between October 2010 and the end of 2014, while the new administration has released 1,000 acres so far this year, Hashim told reporters last week.

“Winning the hearts and minds of these people is a hard task and will take years,” government spokesperson Rajitha Senarathana told IRIN.

Some former residents who had land returned to them remain skeptical that the plan will work since the military maintains such a heavy presence in the area.

Despite the risk, Jambulingam Sudhakaran and his family decided to go home. They are the only family to move back to Tellipallai, while others visit to clear bush from their land. Sudhakaran’s family is staying in the former library building while they prepare to build a small house on their plot, across the road from a large military base.

“There is always a sense that things can turn bad here,” said Sudhakaran.

And questions remain about exactly how much land was confiscated by the military and how much remains under its control.

Graffiti left by soldiers in a destroyed house on land returned to civilians by the military in Tellipallai, northern Sri Lanka 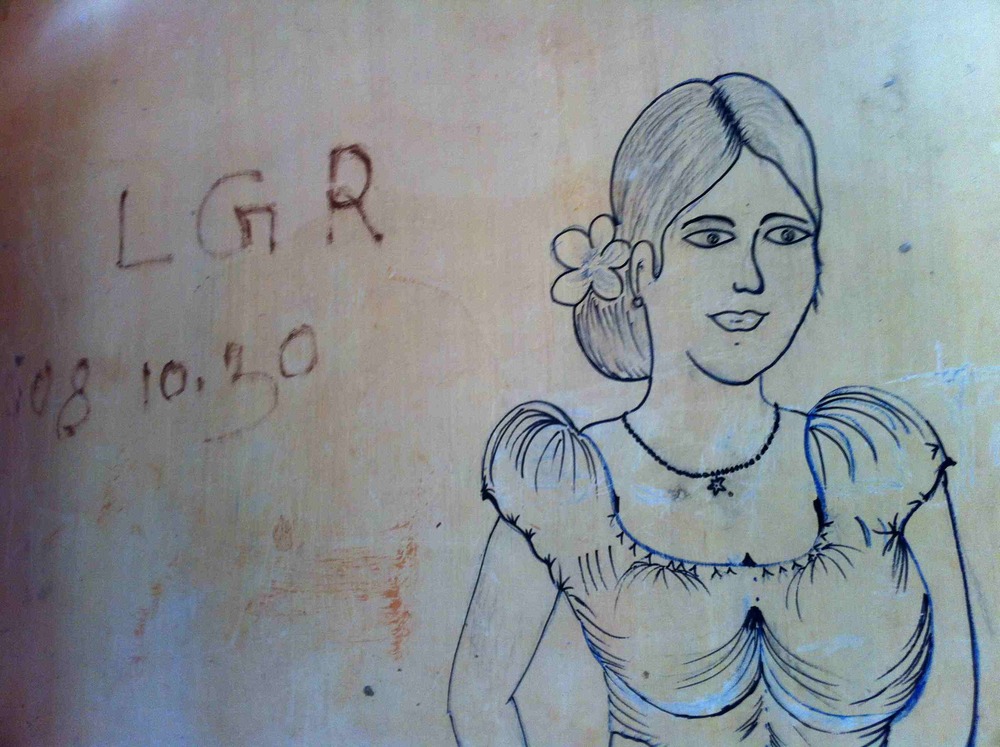 The government says the High Security Zone in the north accounts for less than 10,000 acres, but the figure could actually be far higher, according to Mirak Raheem, a researcher who has written about the subject for the Centre for Policy Alternatives, a think tank in the capital, Colombo.

“We have never had a proper account of what has been used, and in some instances private land once used by the Tamil Tigers was simply taken over the army,” he said.

Others wonder how the program will achieve the goal of releasing all confiscated land to its original owners without scaling down the presence of troops based in the north, which the Sirisena government has ruled out.

“With so much military, if you don’t want to reduce the numbers, the government has no other option but to keep some of these private lands,” said Shanmulingam Sajeewan, a member from the Vallikamam East local urban council representing the Tamil National Alliance, a coalition of Tamil political parties.

“Put simply, there is no land to set up more camps,” he said.