Over the last year, violence has continued across the Central African Republic (CAR) despite multiple cessations of hostilities agreements and attempts to end the conflict. The weeks since mid-December have seen fresh inter-communal violence break out at different locations across the country, prompting thousands of people to flee their homes.

Human Rights monitoring groups such as Amnesty International and Human Rights Watch have called repeatedly for accountability. The International Criminal Court Prosecutor Fatou Bensouda announced in September that the ICC was ready to open its second investigation in the country.

IRIN looks at the impact of the internal conflict in numbers.

2.7 million: Number of people in need of immediate humanitarian assistance (of a total population of 4.6 million).

1.5 million: Number of people who face food insecurity, according to the World Food Programme (32% of the population).

27: Number of international soldiers killed since 5 December 2013 (including 22 soldiers of the former MISCA, 3 French soldiers in the Sangaris operation, and two UN peacekeepers).

18: Number of aid workers have been killed since January 2014.

3: Number of journalists killed in 2014 in CAR (two from CAR and one from France).

300+: Number of mosques destroyed throughout the country in 2013 and 2014, according to the spokesman of the Islamic community (including 26 in the capital).

14 tons: Amount of ammunition seized and destroyed in 2014, according to the Sangaris operation.

1,500: Number of weapons seized and destroyed in 2014, according to the Sangaris operation.

About 12,000: Number of armed ex-Seleka currently making up the three factions of the former coalition. 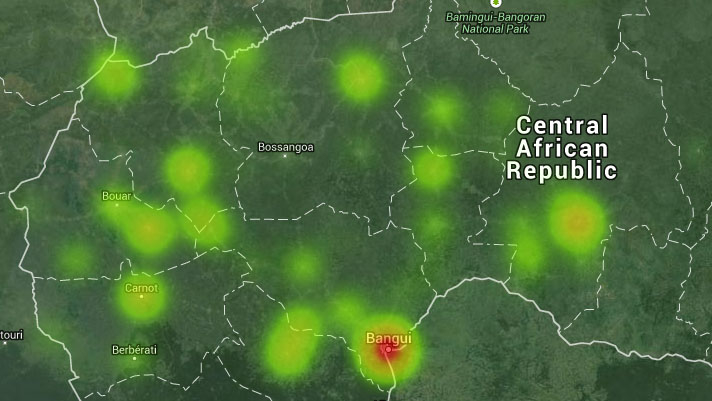 75,000: Estimated number of anti-balaka members distributed across the country, according to their leaders. Other sources put the figure at as low as 20,000.

2,000: Number of ex-Seleka combatants transferred from their camps to the interior of the country by the International Organization for Migration in 2014.

105: Number of NGOs (national and international) that have been working in the country since December 2013.

2.3 million: Number of children affected by the conflict in 2014.

28,000: Number of children in CAR suffering from acute malnutrition.

430+: Number of children in CAR killed or maimed in the conflict.

$613 million: Amount requested for the 2015 Strategic Response Plan, to meet the needs of two million people in CAR.