Civil society and religious organisations in the Central African Republic are working to rebuild trust and harmony in a country fraught with ethnic and religious animosity since the overthrow of President François Bozizé in March 2013.

The real impact of a national reconciliation plan by the interim government of President Catherine Samba Panza is yet to be seen and violence still continues across CAR, although the plan was revamped during July ceasefire talks in Brazzaville. It sets mediation and dialogue as objectives for community and political leaders, as well as the formation of a reconciliation commission.

A national reconciliation minister has been named; a daily radio show on reconciliation has been running for a few months, and billboards with messages of harmony are visible on the streets of the capital, Bangui.

These initiatives have mobilized religious leaders, civil society organizations and even parties to the conflict to work for peace. Former anti-balaka militia organizer Sébastien Wenezoui, and Ousmane Abakar, the country’s Muslim community spokesman, recently formed a political party. “The time has come to put Central Africans, ex-Seleka and anti-balaka on the road to peace and to rebuild CAR,” said Wenezoui.

The country’s conflict pitted the mainly Christian anti-balaka milita and Muslim ex-Seleka fighters against each other. “The cultural or religious differences should not be an obstacle to peace,” Wenezoui said.

At the start of the year, the archbishop of Bangui, Dieudonné Nzapalainga, led an inter-faith forum comprising him, head of the country’s Islamic community imam Omar Kobine Layama, and Evangelical Alliance leader Nicolas Grekoyame Gbangou. The forum has been organizing regular prayer meetings and other gatherings to discuss peace and reconciliation.

In June, the forum launched an “inter-religious campaign for social cohesion” - still ongoing and designed to narrow divisions in the country. It also held a week of prayer and cultural dialogue after two months of sensitization on social cohesion.

Debates, sporting and cultural events, as well as visits to the camps of the displaced, have been organized. A large religious ceremony that brought together the faithful of multiple confessions in a Bangui stadium was also held, while some 400 religious leaders have been trained to encourage reconciliation.

“Our role as leaders is to be peace brokers, to create space for dialogue among communities. That’s the objective of the forum where Muslims, Protestants and Catholics are seated around a table to demonstrate that it is possible to live together…

“Our role as leaders is also to show the way forward - to say the way is not barbarism and killings, but fraternity, forgiveness, unity and reconciliation,” said Nzapalainga, who in 2013 sheltered imam Layama for months after he was forced to flee his home.

Nonetheless violence has continued in many parts of the country. On 16 December, 28 people were killed in the town of Mbres, an area that has been the site of much fighting in recent weeks.
On 22 December, Human Rights Watch warned of hundreds of Muslims trapped in enclaves living in “deplorable conditions” and document instances of attacks within the enclaves.

Over 860,000 people are currently displaced as a result of the conflict.

Recently, Nzapalainga and a group of Christians visited a camp where thousands of ex-Seleka rebels are being held. The former rebels had a few days earlier protested against their living conditions and demanded improvements from the government.

“The church is organizing activities where Muslims and Christians work together for social cohesion,” the archbishop said. With his encouragement, displaced Muslims have been given shelter at various parishes across the country.

Settling scores - on the pitch

In early December residents of the predominantly Christian neighbourhood of Fatima played a football match against the Muslim district of PK 5, an area from where armed men in May and April carried out a series of attacks on Fatima residents. A few months ago, it would have been unthinkable.

Also in December, an anti-balaka squad faced off with ex-Seleka’s 11 at Bangui’s Municipal Stadium in a match watched by the reconciliation minister. The match was organized by leaders from the rival sides following months of a reconciliation campaign dubbed “It’s Enough”.

“We are only seeking peace through these activities,” said Abdel Kader Khalil, a former anti-balaka officer.

Jeannette Detoa, national reconciliation minister, said: “When we see these two sides playing football it means peace is slowly returning. We need to encourage the youths… Reaching peace depends on their commitment.”

Runners line up at the first Bangui Peace Marathon held in December 2014. 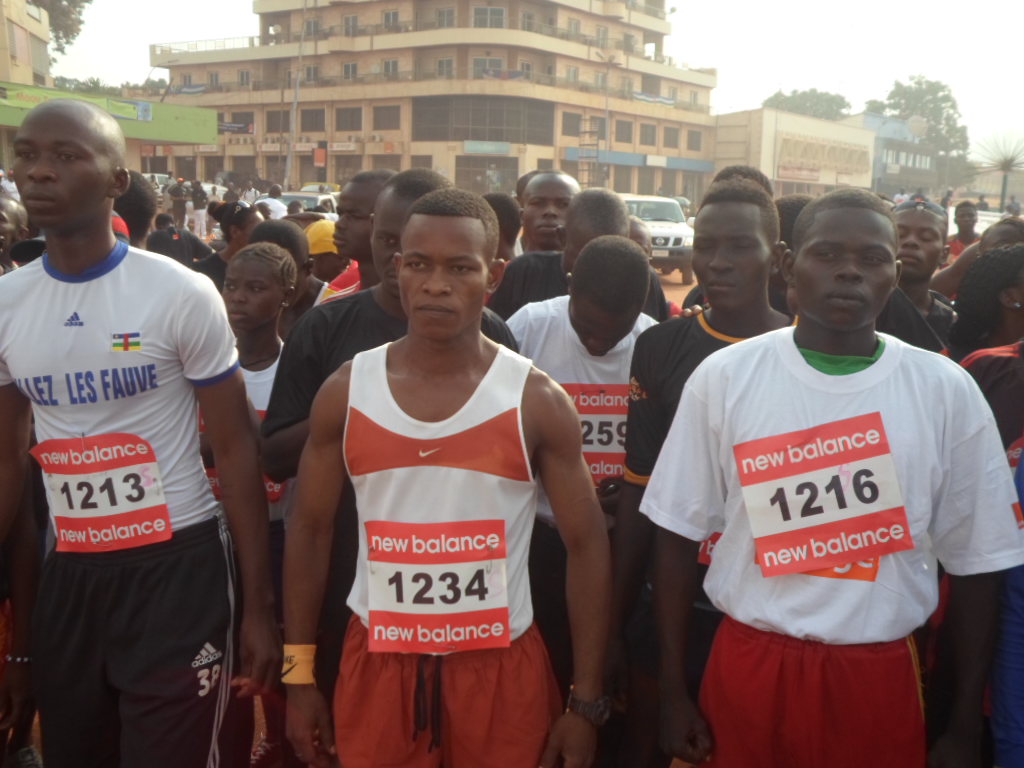 Recently, Bangui also saw its first marathon race as part of the efforts to revamp harmony. The Bangui Peace Marathon was organized by local NGO Point d’Appui and the CAR Athletics Federation. Government officials and politicians took part alongside other athletes.

“As those working for peace and social cohesion, this is an event we must attend. When the youths mobilize for cultural events and fraternity, we have to be present to show our commitment and encourage them,” said imam Layama.

“Young Muslims are taking part in this event. This shows the beginnings of social cohesion. There should be many more such activities,” he said.