A shortage of trained health workers in Liberia, Sierra Leone and Guinea who can treat Ebola victims and prevent further spread of the deadly disease is hampering response efforts, say Health Ministry and NGO staff, who say their efforts are at “breaking point”.

Stéphane Doyon, West Africa coordinator of NGO Médecins Sans Frontières (MSF), which is shouldering a bulk of the case management burden in the three countries, told IRIN: “We are reaching the breaking point of our capacity where today we can’t guarantee to do morde of what we’re doing - particularly when it comes to human resources. We need more actors to get involved on the ground.”

MSF has deployed 300 health workers, 80 of them expatriate staff, to work on the Ebola response. “It’s a huge programme but human resources are very challenging: staff must be highly trained and they have to be turned over every 4-6 weeks due to stress and fatigue,” said Doyone. Thus far, MSF has spent US$9.3 million on its Ebola response and does not know how much more it will take, “but rather than focusing on more money, what is needed are more actors on the ground and implementation… Ministries, humanitarian organizations could all be doing more.”

Ministry of Health staff in Liberia and Sierra Leone also called on donor governments and international agencies to urgently step up their response. Tolbert Nyensuah, assistant health minister for preventive services in Liberia, told IRIN both the Liberian Health Ministry and the government as a whole, lacked the capacity to contain the Ebola virus. “We need trained nurses, trained doctors who can help our local staff manage Ebola patients who are in isolation units. We need additional medical supplies. We need to increase the number of treatment centres as the caseload is increasing.”

As of the latest reported statistics, some 729 people have died from the Ebola virus, with 1,323 people infected, making it the largest recorded outbreak.

One health worker, who preferred anonymity, said governments should be doing a better job of sending over specialist health teams to help the response. “[Affected] governments should appeal directly to the US, Europe, Canada, Japan to do more to help.”

There has been criticism that WHO is not doing enough and its response has not been sufficiently concrete. The government and aid agencies are “overwhelmed” said Nyensuah. “This has become a humanitarian crisis and Liberia alone cannot handle this now.”

The presidents of Sierra Leone and Liberia each launched National Action Plans today to up the fight against the disease. In Sierra Leone all epicentres will be quarantined and house-to-house searches will be undertaken to identify at-risk individuals. Liberia President Ellen Johnson Sirleaf committed US$5 million to up the response. Sierra Leone’s President, Ernest Bai Koromoa, has declared Ebola a public health emergency.

WHO declared Ebola an emergency on 26 July and has set up an outbreak coordination centre in Guinea’s capital Conakry, which will coordinate support to governments at the local, national, regional and international levels. 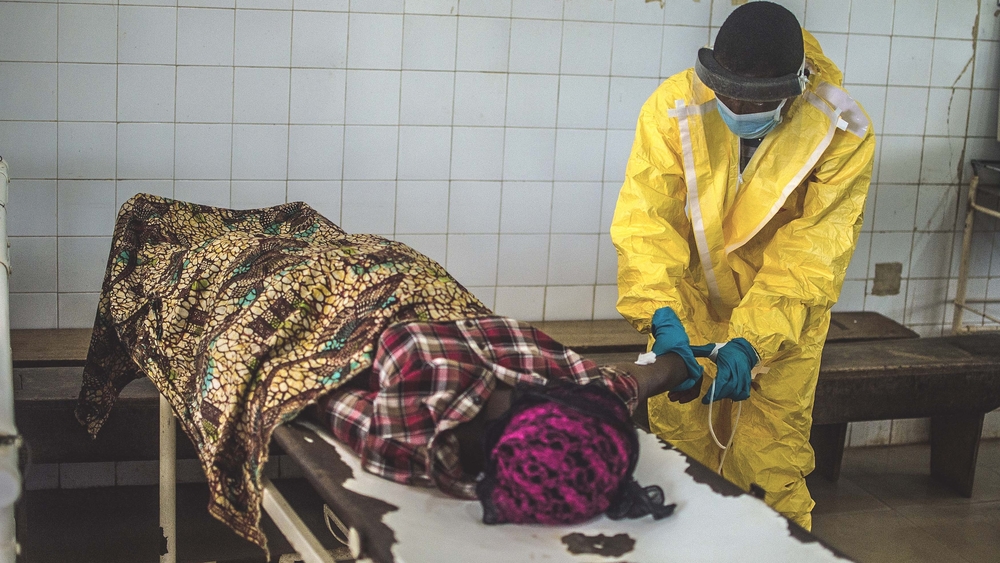 WHO spokesperson Tarik Jasarevic said WHO is helping with case management, surveillance and epidemiology, working with health ministries, as well as MSF, the Red Cross, UNICEF, NGO Samaritan’s Purse and others. Some 120 experts have been sent in to the region and WHO is trying to source more, he said. National and International Red Cross and Red Crescent Societies are focusing on raising awareness of hygiene practices during funerals, which have been a major transmission source; while UNICEF and the Liberian and Sierra Leonean governments have stepped up community awareness raising, with radio messaging, posters and door-to-door visits.

“We are going to ministries and agencies carrying out social mobilization campaigns and we are also talking to local and international media raising the awareness… but we need more resources to intensify community to community awareness,” said the Liberian Health Ministry’s Nyensuah.

Human resources are hard to find because so many trained staff are needed. Each new reported case involves isolation and treatment under rigid safety rules; a tracing operation of everyone the individual has been in contact with over the past 21 days; tracking each of these contacts for 21 days; developing epidemiological surveillance networks; and carrying out community health promotion activities to prevent others from catching the disease.

“We can’t just have one system of social mobilization, training, etc. We have to set them up in multiple locations, which uses a lot of time and resources,” said Jasarevic.

The region is marked by a highly mobile population, which makes it difficult to trace contacts. “The best that we can do with such a mobile population is to get good at tracing and sensitization so people will alert you if they’re on the move,” said MSF’s Doyone.

MSF has limited its Kailahun Ebola treatment hospital to 88 beds because safety has to be the “overriding priority”, said Anja Wolz, head of the operation there. “For us the most important thing is that we're sure about the protection of the staff - from cleaners and drivers to doctors and nurses, and the safety of the patients.”

Safety measures in place in Kailahun, where no staff members have died from the disease, involve disposing of up to 5,500 euros’ worth of equipment each day, with the majority of staff’s protective suits only worn once, said an MSF spokesperson. When entering or exiting the compound all must pass a security post to disinfect their footwear and hands. Before entering the isolation ward, staff pass through dressing rooms where assistants ensure they are wearing protective suits properly and their gear is sprayed with disinfectant when they leave to ensure nobody contracts the virus while removing the contaminated suit.

These safety measures were not adhered to as strictly at the Ministry of Health-run Ebola treatment centre in Kenema in central-eastern Sierra Leone, where up to 20 staff have died since treatment started two months ago, including the hospital’s top Ebola doctor, Sheikh Umar Khan. In Liberia, Samuel Brisbane, a senior doctor working at the Ebola treatment centre on the outskirts of the capital Monrovia, died, while a doctor working with NGO Samaritan’s Purse has been infected.

In Kenema treatment centre, IRIN witnessed staff taking blood from a suspected Ebola patient with their heads exposed and their protective suits unzipped to their chests. Some staff members donned their suits hurriedly without assistants, and thus were not fully protected.

Overworked and severely stressed health staff will inevitably make mistakes, said Health Ministry spokesperson Yahya Tunis. "You have to understand, the nurses at Kenema work 12 or 14 hours a day. And with Ebola, the slightest mistake can be fatal… We are very short of staff. Before this [outbreak] started, we did not have many staff to deal with Ebola.”

The Ebola operation at Kenema is currently on hold.