Nearly half a million people have been forced out of North Waziristan Agency by an ongoing Pakistani military operation there, including nearly 80,000 that have made their way to Afghanistan, a largely unprecedented movement.

Journalists have been largely barred from North Waziristan, making independent verification difficult, but there have been reports of civilian casualties, as residents wait for breaks in an otherwise strict curfew, and jet aircraft, helicopter gunships, and artillery fire hits suspected militant positions near residential areas.

Most of those fleeing have made their way to safety in other parts of Pakistan, some walking nearly 50km in temperatures up to 47 Celsius, or hiring trucks to carry their families towards the city of Bannu (population around 1 million) which has become the main transit point for those leaving the North Waziristan cities of Mir Ali and Miran Shah.

The Zarb-e-Azb (“Sword of the Prophet”) offensive against Taliban militants was officially launched on 15 June. On 30 June the Pakistani army began a ground offensive following air strikes which the army says have killed 370 militants.

The military has sealed access to North Waziristan except for the Bannu road, or west to the Afghanistan border.

The Federally Administered Tribal Areas Disaster Management Authority (FDMA) and the Pakistani military have set up a camp to house the internally displaced persons (IDPs) at Bakka Khel, near Bannu, 15km from the North Waziristan border, yet only a few dozen families have chosen to stay there. Most of the 455,000 IDPs registered with FDMA are opting to stay with relatives near Bannu, or finding rented accommodation in the area.

Families entering Bannu told IRIN the cost of transportation has skyrocketed since the offensive began: Hiring a truck to carry a single home's belongings was about Rs. 8,000 ($80) a month ago, but now runs upwards of Rs. 60,000 ($600).

A reversal of roles

Faced with difficulties in transportation and a lack of relief coordination from the Pakistani authorities, thousands of families have opted to leave for bordering provinces in Afghanistan, especially those living close to the border.

According to the latest statement issued by the UN Refugee Agency (UNHCR) in Kabul, 9,100 families, or more than 65,000 individuals, have registered so far in the Afghan province of Khost, and another 2,000 families in the province of Paktika.

It is a rare reversal of roles for the neighbouring countries. For most of the last three decades, Afghans have fled conflict in their own country for safety in Pakistan. More than 1.6 million registered Afghan refugees are still residing in Pakistan, down from more than 3 million in 1988.

According to UNHCR data from January 2014, nearly a million Pakistanis were already living as IDPs before the current operation in North Waziristan.

“We are giving them food and non-food items worth 50,000 Afghanis [US$875],” the deputy governor of Khost, Abdul Wahid Pattan, told IRIN. “Around 3,000 families have been accommodated in the Gulan camp of Khost Province. There are [also] lots of families who shifted to Paktika Province from North Waziristan.”

Miram Shah, the headquarters of North Waziristan Agency, is less than 20km from the Afghan border. At the Ghulam Khan border checkpoint, it touches Afghan soil.

According to officials in Afghanistan, the World Health Organization, the Afghan Red Crescent Society, the Afghan government, and various UN agencies are coordinating relief activities for the families arriving from Pakistan.

For those living close to the border, the journey to Afghanistan takes only a few hours, and refugees report Afghan authorities are facilitating their movement by offering supplies. Some even report trucks waiting for them at the border.

Rehmatullah, 38, a driver from Miramshah, transported a family to Gurbuz District in Khost, and arrived back at Bannu, in Pakistan, on Friday 27 June. “I already had my family here [in Bannu, so I returned] otherwise the situation of Pakistani refugees in Afghanistan is much better than in Pakistan,” he told IRIN.

“When militant leader Hafiz Gul Bahadar denounced the peace deal with the government at the end of May, although elders and government officials of North Waziristan were convincing us that there is no chance of an operation in North [Waziristan], I didn’t trust them, and with 30 members of my family, including women and children, came to Khost.”

“I was hired by Nasib Khan Wazir, head of a 17-member family from district Ghulam Khan. It's just half an hour from the border,” he recalled. “When we crossed the border, we were warmly welcomed by the border security forces. I also saw some trucks had been parked by Afghanis to facilitate families leaving Pakistan, but I am not sure whether the trucks and other vehicles were provided by the Afghan government, or our Afghan brothers living on the other side of border. After an hour we were in Gurbuz. I left them with their relatives in the Ismail Khel area.”

The Wazirs are a major tribe of Waziristan, living on both sides of the Afghanistan-Pakistan border, also known as the Durand Line. So when the operation geared up, most of those who were leaving to Afghanistan, including Nasib Khan Wazir, were from this tribe. However, with the passage of time, the Dawars, the second biggest tribe living close to Afghanistan, also followed them.

Dozens of families left North Waziristan and moved to Afghanistan even prior to the announcement of an operation against militants, as it became clear a major conflict was shaping up.

Azmatullah Dawar, from the Darpa Khel area of North Waziristan, told IRIN he left for Afghanistan when the head of the Taliban in North Waziristan, Hafiz Gul Bahadar, announced the termination of an eight-year-old peace agreement with the Pakistani military that had brought relative calm to the region.

Families from North Waziristan traveling to Bannu. Pakistani security forces have setup checkpoints along the road. 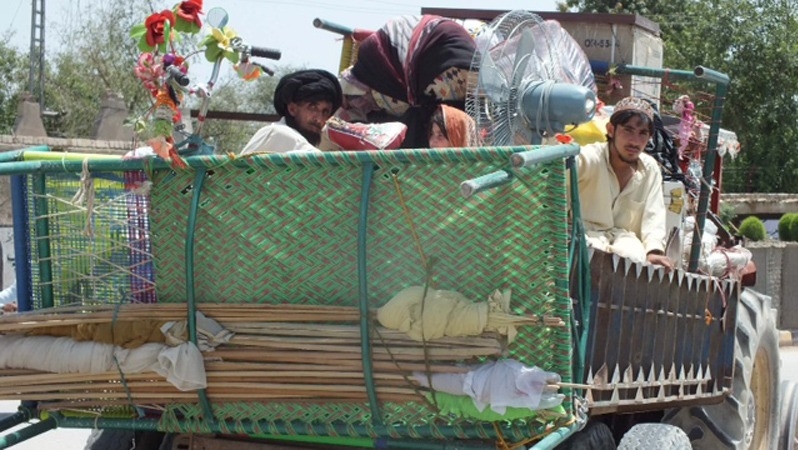 “When militant leader Hafiz Gul Bahadar denounced the peace deal with the government at the end of May, although elders and government officials of North Waziristan were convincing us that there is no chance of an operation in North [Waziristan], I didn’t trust them, and with 30 members of my family, including women and children, came to Khost.”

Most of the refugees are opting to stay with their relatives or with volunteer host families in Khost and Paktika. After registration, the Afghan authorities are trying to drop their relief packages at the doorstep of their hosts.

The Afghan government has also established a major refugee camp with an area of 809 hectares at Gulan, in Gurbuz District.

Mir Zaman, a resident of Miramshah now living at the Gulan Camp, told IRIN: “Those who are arriving here are receiving tents, flour, rice, blankets, and mattresses, while life at the camp is very secure and well managed. Our children got polio vaccination here in the camp.”

On 29 June, Muslims across the region began observing the month of Ramadan, abstaining from food and drink from sunrise to sunset, a practice that has been made difficult by life away from home. In the summer heat, large amounts of water must be consumed before sunset and after sundown to make it through the day.

“It is now tough because of Ramadan,” Mir Zaman told IRIN. “There are problems of [a lack of] clean drinking water. As we are not used to living such a life in tents, we are missing our homes in Pakistan.”

Kamran Wazir, 36, a businessman, first went to Khost along with his wife and five children, because the Pakistani military's curfew made travel to Bannu difficult. His family could not face the scorching sun in Khost though, so they left for the lush green and comparatively cold valleys of Kurram Agency, Pakistan, just north of North Waziristan.

“It was fine living there. But I think not so much better than Pakistan. There were issues of electricity and weather,” he told IRIN. “Now when the fasting month of Ramadan has arrived, it’s really difficult to live in Afghanistan as a refugee. The basic reason behind people going to Afghanistan is not the facilities they are offering, but actually due to curfew a large portion of North Waziristan was cut off from the rest of the country so we had no other option. ”

With the ground offensive already under way, it is possible that the entire civilian population of North Waziristan, more than 700,000 people, could be displaced.