Health officials are warning that a cholera outbreak in South Sudan’s capital, Juba, which has left 23 people dead and forced more than 670 others to seek treatment, could be getting worse. Laboratory tests have confirmed that at least one person living in a Juba displacement camp has contracted cholera and there are fears the disease could spread rapidly within the crowded site.

Officials are setting up new treatment centres across the city and treating the water sources they believe are responsible for spreading the disease, but said they anticipate at least 1,000 more people might need to be hospitalized before the outbreak ends. And that is only if cholera does not spread to other areas of the country.

Health Minister Riek Gai Kok officially announced the cholera outbreak nearly two weeks ago - the first in South Sudan since 2009 - and pledged “as the government, as a country [we] will support any efforts made to contain this disease.”

The outbreak was not unexpected. The World Health Organization’s (WHO) Abdinasir Abubakar said the ministry and health partners had already started preparing for the appearance of cholera and other communicable diseases “because of the context. Because we had a lot of population movement and that population movement always brings some health problems.”

Five and a half months of fighting in South Sudan has forced more than a million people to flee their homes - and the situation continues to deteriorate. Despite a renewed cessation of hostilities agreement signed nearly three weeks ago by President Salva Kiir and opposition leader Riek Machar, fighting has continued. The UN reports an additional 70,000 people have been displaced since then, some into areas without clean water or enough latrines.

When the outbreak was announced, UN agencies and partners began focusing on some of the most serious water, sanitation and hygiene (WASH) concerns - both in the displaced populations and among long-term Juba residents.

Much of the water people use for drinking and cooking is collected from the Nile and delivered by tanker truck. UNICEF’s WASH chief Lillian Ukwiri said they are trying to track down every truck and make sure each shipment is chlorinated, something which should kill cholera bacteria.

They have also put out radio advertisements instructing people to boil water for at least 10 minutes before drinking it or cooking with it, and to wash their hands regularly. The messages also encourage people to report to a health centre as soon as they show any symptoms, including watery diarrhoea or vomiting, because the disease can kill swiftly.

When the outbreak was announced, Juba Teaching Hospital set up an emergency isolation ward. It filled quickly, with patients sleeping in open-air corridors that have been covered with tarps. Trina Helderman from Medair, a humanitarian group providing emergency services in the country, has been stationed at the ward since it opened. She told IRIN that initially they were seeing more than 100 patients a day, though the intake has slowed.

“It seems that the cases are going down, but based on what the experts have told us, it could be that the peak comes back up again,” she said. “We’re just waiting to see how things play out.”

Helderman said the messaging does seem to be working, with many people arriving as soon as they exhibit any symptoms, which makes it easier to treat them. They receive either oral rehydration salts to replace fluid lost in diarrhoea or vomiting or - in severe cases - an intravenous drip.

But some people are still not making it to the health centres in time. Samuel Moro’s family said they recognized the symptoms of cholera immediately, but first attempted to treat the disease with a homemade rehydration solution of sugar and salt. His condition worsened over the next 48 hours. By the time he arrived at the isolation ward, it was too late. He died a few hours later.

His brother, Kagwa Apolo, told IRIN Moro’s family was aware of the outbreak and had heard the messages encouraging them to seek treatment, but “we were hoping we could treat him at home. People left him to stay at home for a long time.” 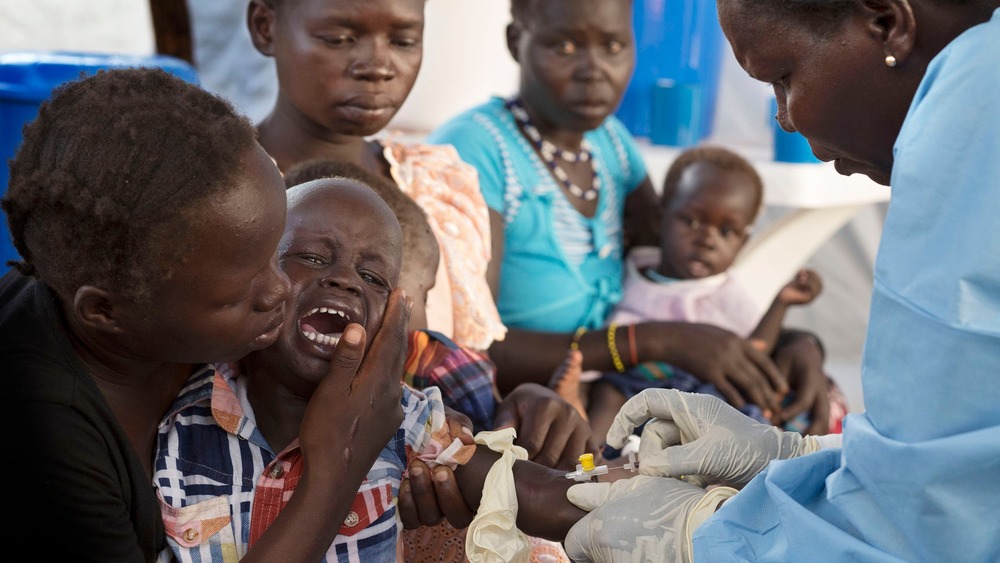 WHO’s Abubakar said the outbreak’s fatality rate is still too high. To bring it down, he said they needed to increase the surveillance teams so they could more quickly identify people in need of treatment, like Moro. They also needed more cholera treatment centres (CTCs). Médecins Sans Frontières (MSF) opened a clinic last week in one of the hardest-hit areas of the city and Abubakar said health officials are considering opening two additional centres in the coming weeks.

Those are not the only shortages. Abubakar said because the outbreak has been worse than officials initially anticipated, it has forced them to revise the expected number of people showing symptoms of cholera from 5,000 to 10,000, 2 percent of the population. 2,000 people are expected to be hospitalized.

When the fighting started in mid-December, thousands of people crowded into the UN Mission in South Sudan’s two bases in the capital. More than 14,000 people are still living in each of the camps, which do not have enough latrines or other basic sanitation facilities.

Stefan Liljegren, MSF’s field coordinator, told IRIN there was one laboratory-confirmed case at the UN House camp on the outskirts of Juba and seven other patients who showed symptoms of cholera.

Because of their conditions, health officials already viewed the camps as high-risk areas for a cholera outbreak. Earlier this year they provided two doses of oral cholera vaccines to more than 96 percent of the people living in the camp in an effort to mitigate the impact of a possible outbreak.

But Liljegren said the vaccine offers only 65 percent coverage, which means there is still the potential for thousands of people to become sick. MSF has already set up CTCs in each of the camps.

“The advantage in the camp is that the population is aware,” he said. “They have a very close access to the CTC, so hopefully they will be able to access treatment very quickly, and thus, also be discharged very quickly.”

Abubakar said they are also waiting for reports from three other areas of the country where potential cases have been reported and acknowledged. “Our estimation is the cholera outbreak might spread outside Juba.” Even without any confirmation, the government has encouraged state officials to start rolling out public awareness campaigns and preparing people for the possibility that the outbreak could spread.