A colonial-era law criminalizing "unnatural" sex is reinforcing the stigma that leaves men who have sex with men (MSM) in Myanmar "hidden, silenced and shamed", hindering efforts to contain HIV/AIDS among this highly at-risk group, AIDS experts and activists say.

Some monks, lawyers and police are now calling for the rarely-enforced law from the British colonial era - Section 377 of the Penal Code - to be used to imprison one gay man and an HIV/AIDS activist who earlier this week marked their 10-year anniversary together with a wedding-style event.

The ceremony made front page news on 3 March - but the backlash was swift and furious. The next day Myanmar's largest newspaper, Eleven Daily, equated sex between men to bestiality, and asked why the couple were not being investigated for violating Section 377, which carries a 10-year prison term.

Aung Myo Min, director of rights group Equality Myanmar, which is leading the campaign to repeal Section 377, said Eleven Media was using "hate speech" to stoke homophobia, but not all news outlets were following suit.

MSM are "hard to reach in the most extreme sense" and that "stigma keeps them hidden", said UNAIDS country representative Eamonn Murphy.

Anne Lancelot, director of PSI's Targeted Outreach Programme, agreed. "We know there is a large population of MSM who do not identify themselves that way, but we don't even know how large that population is," she added.

Murphy noted, however, that over the past decade the visibility of MSM was increasing, particularly in cities.

Myanmar's National AIDS Programme (NAP) puts the number of MSM at less than 0.5 percent of the population: 240,000 out of an estimated 60 million people. Less than 30 percent of them have received HIV prevention services.

This low level of outreach to a group that may also be vastly underestimated alarms experts. Concerns are compounded by the lack of sex education in Myanmar.

NAP conducted its first surveillance of HIV prevalence among MSM in 2007, finding a 29 percent infection rate. The rate is about 7-8 percent now, compared to less than 0.6 percent for the overall population.

The decline is often attributed to deaths from lack of access to antiretroviral medicines and increased condom usage, but it is possible, too, that some MSM are hiding their identity to escape the stigma, Murphy said.

Nearly half of the estimated 200,000 people with HIV/AIDS in Myanmar live in Yangon or Mandalay, the two largest cities, according to a draft report by regional AIDS experts.

Cities offer MSM freedom, but the risk of HIV infection rises when awareness of safe sex is scant, discrimination is rife and services frail, the report notes.

An outreach worker from PSI hands out condoms and sex-safe information for MSM in Yangon. Outreach programmes for Myanmar's MSM community remain limited 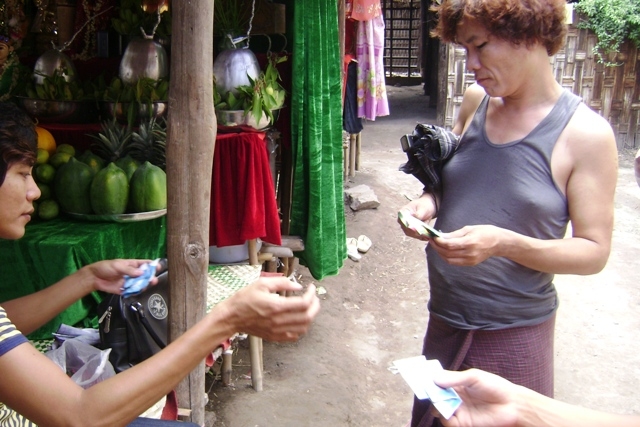 If Myanmar wants to avert what has happened in other Asian cities, it needs to reduce stigma and expand services for MSM in cities, it says, stressing the need to repeal Article 377.

Doctors need to become less hostile to MSM, the report says. MSM are often treated with contempt by doctors, the report says. As a result, "most MSM are terrified of going to a doctor for a sexually transmitted infection," Lancelot said.

Myanmar's MSM have a unique set of terms for describing themselves, one based, in part, on the degree by which masculinity and femininity are experienced and displayed. Transgenders are less likely to be hidden and more likely to experience harassment, especially from police, according to complaints to the Human Rights Commission set up by Myanmar's nominally civilian government.

MSM who identify as heterosexual, however, are more likely to be hidden, married and susceptible to bribery, activists say.

Expanding Internet access in Myanmar is providing a new way for hidden MSM to connect anonymously, as well as more opportunities for risky sex.

PSI is expanding its outreach programme online. "We're going on the cruising websites and Apps, like Grinder and Jack D," Lancelot said. "This might help us reach people who do not come to our [18] drop-in centres."

"We are watching very carefully what is happening in Thailand, where there seems to be quite a rebound of the HIV epidemic amongst MSM. We need to be ahead of the curve," she said.

HIV prevalence among MSM in Bangkok surged from 17.3 to 28.3 percent from 2003 to 2005, and remains nearly 30 percent, according to a 2013 report by Thailand's Ministry of Public Health and the US Centres for Disease Control and Prevention.