Read about what we achieved.
BAMAKO

As Mali slowly emerges from its 2012 political crisis and the Islamist insurgency in the north, the new government and its partners are focusing on long-term development. But aid groups warn that there are humanitarian needs that must be addressed immediately, particularly ensuring more food aid gets to extremely vulnerable communities in the north.

“The humanitarian crisis is still there. There are people out there who are extremely poor and need humanitarian assistance,” said Oxfam country director Mohamed Coulibaly. The World Food Programme (WFP) estimates that some 1.5 million people will need food assistance this year.

In a January statement, 11 NGOs raised concerns over food scarcity in northern Mali.

Among the concerns were: the projected early start of the lean season, which normally begins in April or May, when households have normally run out food stocks; the deterioration of pasture and the likely loss of livestock; the legacy of poor harvests in the 2012-2013 season; and poor roads and insecurity that continue to stymie aid access.

The statement also warned of a “drastic reduction” in aid funding and dangers of serious donor shortfalls.

Breaking the cycle of crisis

Sally Haydock, WFP country chief, points out that Mali is now into “its third year of crisis”. The effects of the 2011-2012 drought were exacerbated by the onset of conflict in January 2012, leaving many people out of work and unable to plant.

Haydock argued that cycle of crises can be broken, but only if appropriate action is taken. “There has to be enough support for the agricultural season in terms of seeds, inputs, fertilizers in time,” Haydock emphasizes. Good rains are also critical.

She acknowledged that agricultural performance and food needs vary from region to region. This year, the Dogon country is of particularly concern, especially the central region of Bandiagara, where the harvest only lasted until mid-January. Haydock said the area will require food distributions for several months.

WFP has crafted a three-year resilience programme, part its attempt to break the cycle of food shortages. Water harvesting, irrigation and market gardening are some of the agency’s strategies for Mali’s post-emergency agricultural priorities.

“I think it’s important that, despite the other competitive needs of CAR [the Central African Republic], South Sudan and Syria, Mali not be forgotten. Donors have pledged a lot of money at the Brussels conference [for] ensuring stability of the country, and now we need to ensure that carries on,” Haydock told IRIN.

Oxfam’s Coulibaly said that donor response to the NGOs’ alert has been disappointing, and there is fear that Mali’s humanitarian needs could be eclipsed by other crises.

“If aid is going up in terms of military assistance and budget support, there must also be a clear increase in humanitarian support,” Coulibaly argued. “And this has to be done rapidly. If the response is not fast, things could become a lot more serious.”

The ongoing crises in South Sudan and the CAR have moved Mali out of the spotlight.

Donors met with Mali’s interim government officials in Brussels in May 2013 for the "Together for a New Mali" conference, following the ouster of Islamist rebels from the northern towns by French forces. At the event, there were strong public commitments from France, the European Union (EU) and others to build on the peace that had been secured.

Donors pledged some 3.3 billion euros, with a strong emphasis on “transparency and mutual accountability”, although observers have noted that some of the funding promised was “old money” from previous cooperation budget lines. The aid, particularly from the EU, was conditional on Mali making significant progress on governance, restoring state services, holding elections and combating corruption.

With successful elections held, democracy restored and the state, albeit slowly, taking on its responsibility for delivering basic services, Mali should be in a much better position than in 2012 or 2013. But UN Humanitarian Coordinator David Gressly warns against complacency. 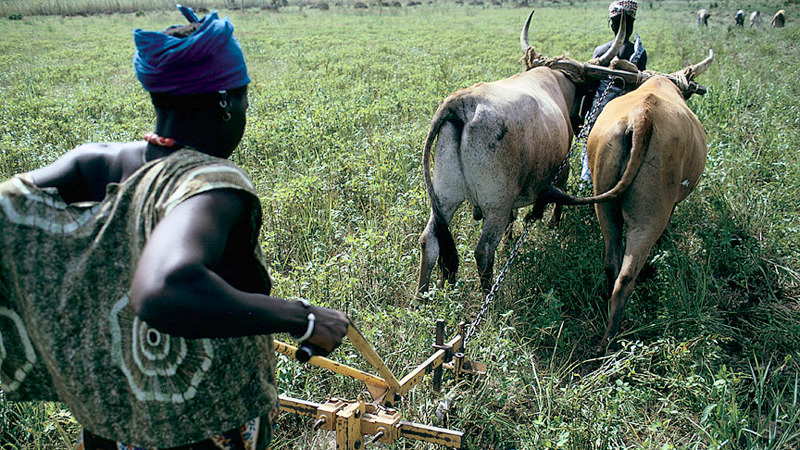 “It’s a tough year I’m looking at,” he acknowledged, warning that there is no guarantee of humanitarian needs being met. “In 2013, we only raised 55 percent [US$265 million out of $477 million] of what we needed,” he said, stressing that Mali needs more resources. “We need to keep the pipelines open for food and nutrition.”

In the UN Strategic Response Plan 2014-2016 for Mali, food security budget accounts for US$255 million out of the $569 million required in humanitarian funding for the year 2014.

As more displaced people and refugees return home, aid groups warn that successful reintegration requires careful pre-planning. There will still be security concerns to address. Returning farmers will need help before they become self-sufficient again. And access to drinking water for all will be critical.

Gressly noted that the needs of host communities must be taken into account, pointing out that “probably, the most vulnerable are those who stayed behind.”

Reabsorbing returnees will also provide a major challenge to the government. “The will is there, the vision is there, but the government’s capacity is still an issue,” said Oxfam’s Coulibaly. “They need to operationalize the kind of initiatives they have been talking about on decentralisation in the north and meeting the needs of the population.”

A July 2013 food security assessment by WFP and partners confirmed the severity of conditions in many areas of the north. Field research revealed varying levels of food insecurity and 75.2 percent of households in the north requiring food aid.

July 2013 was the height of the lean season, but the results still shocked. “When this came out, people said, ‘This can’t be possible, the figures are way too high’, but this was what we found,” said Oxfam Humanitarian programme manager Christian Munezero.

Munezero acknowledged the traditional resourcefulness and adaptability of both pastoralist and sedentary communities, but says there is an inherent vulnerability as well.

“The smallest upset and everything can be disrupted. When people are vulnerable, the slightest shock, for example lower rains than anticipated, can throw things badly off balance right up to the next harvest. You have to have minimum conditions in place for resilience to be meaningful.”