NOUAKCHOTT
As votes come in following Mauritania's 23 November general and local elections, the party of President Mohamed Ould Abdel Aziz, Union for the Republic, looks likely to emerge the winner, with Islamist party Twassoul in second place. Voter participation estimates range from 46 percent, according to Twassoul, to 60 percent, with many voters describing the elections as being only about candidates' connections rather than policy or real change.

While Twassoul took part, other main opposition parties boycotted the elections, having reportedly called them a "masquerade", accusing the ruling party of not giving them enough of a voice.

President Abdel Aziz seized power in a military coup in 2008, but then was elected president one year later. The next presidential election is scheduled for 2014.

Electoral campaigns this year revealed few new ideas but provided ample opportunity for residents to see luxury cars gliding through upmarket neighbourhoods, as supporters held up pictures of their relatives - a cousin, an aunt, an uncle - to endorse them for a mayoral or deputy mayoral post, said residents of upscale neighbourhood Tevragh Zeina.

Very few of the candidates listed policy or project proposals on the thousands of posters they plastered across the country, said residents of the capital, Nouakchott, home to half of Mauritania's two million people. Leaflets distributed tended to say: "For change, vote for." without spelling out what change they intended to undertake.

Some 1,500 candidates from 74 parties took part, competing for 147 parliamentary seats and 218 local council posts. Results are expected by the weekend.

"Whether it's the candidates for deputies or City Hall, we don't know much about them.. They wear beautiful clothes, but there's nothing concrete there," Seydou Demba, a youth living in Tevragh Zeina, who did not vote in the elections, which he called "a sham". Mayors who were completely absent during their time in power "have the nerve to stand before us - in some cases it's the first time we're seeing them," he told IRIN.
Post-flood demands

Amadou Sall, a carpenter living in Nouakchott's Cinquième, or "fifth" neighbourhood, said this was the case for Raby Haïder, outgoing mayor of the Nouakchott suburb Sebkha, which was badly hit by flooding in September. "She was only interested in lining her own pockets - the few initiatives she did undertake, like cleaning up the marketplace, were for also partly for her own benefit," said Sall.

IRIN could not reach Haïder, but her assistant, Saleck Ould Houdou, said there was no basis for such accusations. Explaining the government's slow response to the floods, he said: "There was very little she could have done about the floods. They were an act of God. We didn't have enough leeway on the accounts to help respond to the needs of the population in the face of this natural disaster."

At least 2,000 people were displaced and hundreds of houses were flooded in Sebkha during September's heavy rains, but the local authorities took three weeks to respond to the crisis, eventually making two water pumps available to discharge water. Until then, residents had taken charge of helping each other, with families delivering hot meals to the displaced, while NGO World Vision helped remove stagnant water and distributed mosquito nets.

Alioune Traore, a water technician from the neighbourhood, said he was glad "the state is finally taking action," but stressed it was a stop-gap solution. "To solve the problem in the long-term we'll need more than a couple of pumps and some pieces of string," he said.

Several interviewees prioritized infrastructure development in the capital, particularly better roads and water systems. N'diaye Diop, another carpenter in the Cinquième, told IRIN: "The recent floods showed that if nothing is done, the lack of hygiene will make this neighbourhood uninhabitable. Infrastructure is the most important thing to focus on. The roads here are just sand tracks. They are all in a state of disrepair. There is no running water, and electricity is not stable."

Only half of Mauritania's city-dwellers and just under half of its rural inhabitants have access to an improved water source, according to UNICEF's 2010 figures.

However, there has been some progress: Nearly 100km of roads have been built across the country over the past five years. And water supply should improve under the government's Aftout-Es-Saheli water supply project, which plans to divert water from the Senegal River to supply Nouakchott's residents. The project also plans to build pumping stations, a water treatment plant and a reservoir.

A girl in the Sebkha neighbourhood of Nouakchott, which experienced heavy flooding in September 2013. 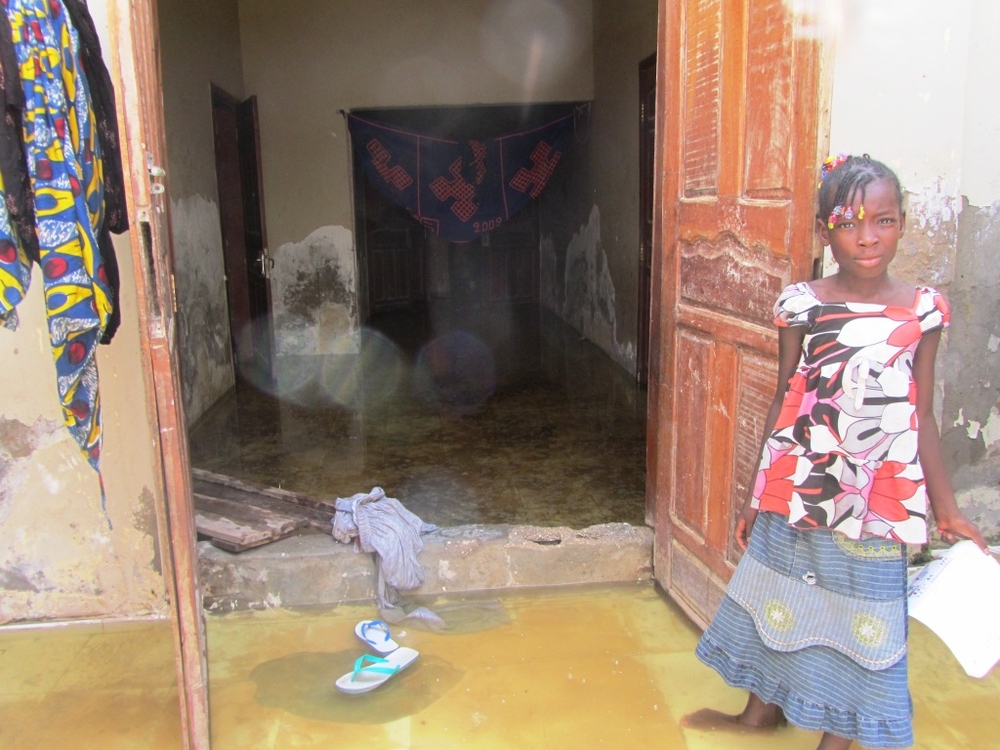 But progress has been uneven, Diop said. So while some neighbourhoods in the east, such as Dar Naim and Toujounine, have experienced improved access to clean water, others, including Basra and Sebkha, home to predominantly black Mauritanians, have seen access either stagnate or deteriorate, said residents.

Other development areas have seen changes: 74 percent of children now attend primary school, though this figure falls among secondary school attendees. (Precise statistics are not available, but just 21 percent of boys and 17 percent of girls attended secondary school regularly between 2007 and 2011, according to UNICEF). Life expectancy since the 1980s has grown by 5.9 years, mean years of schooling for children is up by 1.9 years, and gross national income per capital is up by 15 percent, according to the UN Development Programme (UNDP).

But for many residents of Nouakchott, consistently high food prices since the 2008 global price spike have continued to erode any financial gains they may have made in other areas.

Mauritania is heavily dependent on imported food. Government and World Food Programme food aid covers about 40 percent of the country's cereal requirements in a good year, estimates the World Bank. With the majority of agriculture still rain-fed, the Sahelian country is at the mercy of the rains, which have failed three out of the past nine years.

While 23 percent of Mauritanians earn less than US$1.25 per day, 61 percent live in what UNDP describes as "multi-dimensional poverty", which describes when a household experiences multiple deprivations in education, health and standards of living.

A countrywide exodus from rural areas has inflated the urban populations, and there has been an "explosion" of begging in Nouakchott over the past five years, said resident Mamadou Kane.

The government has high hopes for the Chinguetti offshore oil reserves, which West Africa Resource Watch estimates could equal one billion barrels, but residents are wary that the potential riches may not be used to spur development, despite the 2006 establishment of an oil-for-development fund by the Ministry of Finance, Ministry of Mines and the Mauritanian Central Bank.

Any development plans must focus on building more opportunity for young people, youths all over the capital told IRIN. While residents complain that most candidates gave little thought to the future, a few candidates told IRIN about their plans. Mayor of Dar Naim neighbourhood, Cheikhane Ould Boyba, of Tawassoul, told IRIN that if he received another term, he would continue to run a youth employment-generation programme, which he has worked on for five years with the help of NGO Caritas. The programme trains high school graduates in carpentry, mechanics and other skills and helps them find jobs.

"Youths should not remain idle, and we need to show them that there are alternatives," he said. He has also involved youths in ongoing schemes to keep the neighbourhood clean.

Ould Dey Dey, the leading candidate for mayor, of the Republican Party for Democracy and Renewal, in Tevragh Zeina, also plans to focus on youths if elected. He told IRIN: "Youths are the backbone of Tevragh Zeina. It is a very bad programme that neglected this vibrant community."