"Eight months ago no one had heard of Al-Shabab," said Henri Ladyi, a Disarmament, Demobilization and Reintegration (DDR) expert and director of the Conflict Resolution Centre (CRC) in Beni, a town and territory in North Kivu Province in northeastern Democratic Republic of Congo (DRC).

Ladyi is concerned that rumours about the influence of Somalia-based Islamists in Beni, whether true or not, are unravelling gains made by the CRC in recent years. The UN, Congolese and Ugandan authorities have drawn links between the Allied Democratic Forces (ADF), a Ugandan rebel group operating in the Ruwenzori Mountains just across the DRC border, and Al-Shabab. Civil society leaders in Beni say it was because of such links that ADF activity has seen a resurgence.

In late September, the group killed five people in Beni Territory and kidnapped 36, according to the UN-run Radio Okapi. Witnesses said the rebels went into a health centre where they terrorized patients before tying up and abducting two nurses.

On 25 September, Martin Kobler, head of the UN stabilization mission in DRC (MONUSCO), condemned attacks on health facilities and schools committed by armed groups, including ADF.

He said such acts, a spate of which occurred in July, had “deprived more than 7,000 children of their education and affected the provision of health services for thousands more”.

Also in July, ADF fighters were reported to have ambushed a MONUSCO convoy and held the town of Kamango for two days, leading to the displacement of tens of thousands of people.

"It seems [the ADF] are preparing for an attack,” said Kristof Titeca, armed groups expert and senior research fellow at the University of Ghent and Antwerp. He said he believed the ADF was expecting an attack by MONUSCU’s new Intervention Brigade.

The head of MONUSCO in Goma, Ray Torres, recently told Voice of America that the ADF was “establishing and strengthening its position in the north of the country. And it seems lately… they may be planning operations against FARDC [the Congolese army],” he said, describing the ADF as “very strongly ideologically based. It is an extremist Islamist group that is developing a network of businesses that indicates to us that they are planning to stay.”

Ugandan authorities have repeatedly said ADF has links with Al-Shabab and Al-Qaeda.

"Uganda and others, for geostrategic reasons, often emphasize and exaggerate [Al Shabab's] threat. This does not mean that ADF has no links with Al Shabab - these are there, but minimal, and sporadic,” said Titeca.

Other analysts have cautioned against portraying the ADF solely in terms of its Ugandan Islamist component, noting that this ignores the fact that much of the group’s members are Congolese, and motivated by local grievances.

Nevertheless, the suggested influence of foreign militant Islamists in these remote border regions is creating tensions. "The Muslim community are angry because they are the victims of this," said Ladyi.

He reports that Muslims have come under intense scrutiny and police have carried out a number of indiscriminate arrests. "The civil society accused the Muslim community in Beni of recruiting Muslims and sending them to Somalia to be trained.” Ladyi said Muslim leaders were also criticized for allowing ADF-Nalu leaders into the mosque to pray.

Public perception in Beni has become polarized. Opinion about Al-Shabab's engagement is regularly swung by the pronouncements of government officials from both sides of the border as well as the UN. Meanwhile, conjecture and circumstantial evidence informs the bulk of the local debate. Leaders agree on one thing: there is currently no hard proof, and speculation is damaging.

"There were never any ethnic tensions between Christians and Muslims before," said Jean-Paul Paluku, a leading civil society activist in Beni and coordinator of a human rights group.
This year, he said, there has been massive population displacement and widespread insecurity including kidnap, sexual violation and armed robberies.

Mussa Anguandia, the leader of the Muslim Community in Beni, estimates that there are roughly 35,000 Muslims in the territory, whose population was estimated at around 900,000 in 2004.

He is adamant that the armed groups operating in Beni are not true Muslims. When Kamanga was attacked during Ramadan, armed men wearing ankle-length tunics and prayer caps stole sachets of alcohol from the shops. "This isn't a problem of Islam, it's a problem of political manoeuvring," he said. Anguandia has attempted to counter negative perceptions by discussing the tenets of Islam on local radio and taking a pro-active approach to engaging local security services. He meets regularly with military and police chiefs to discuss measures to address negative attitudes.

A mosque in Beni, eastern DRC 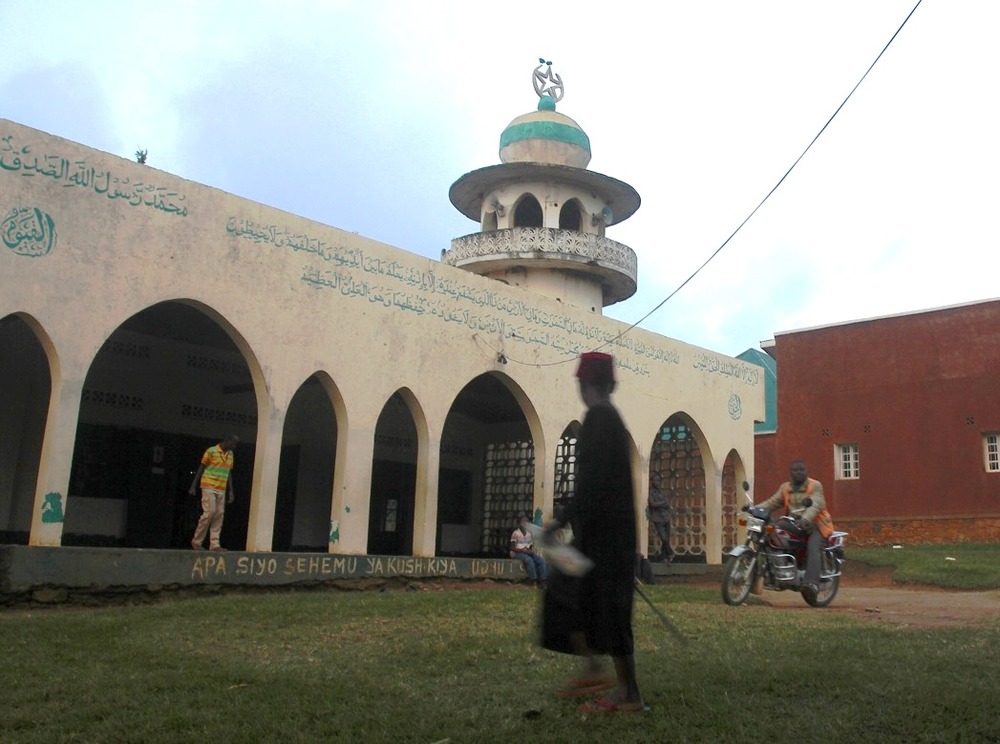 Anguandia fears the racial discrimination that has arisen as a result of the recent spate of kidnappings and attacks could lead to a revolt. "We're not that many, but we can respond," he said.

Ladyi agrees that if the problem is not dealt with, it could either give rise to a new Islamic self-defence group, or drive the community to seek protection from existing groups, such as ADF-Nalu. "The Muslim community are not getting support from the government for their security," he said. "If the government can't solve this situation, the Muslims will seek their own protection."

The population, both Islamic and Christian, continues to be beset by a spate of kidnappings. In the first six months of this year - the same time-frame that the community ascribes to Al-Shabab's involvement - civil society leaders recorded the kidnap of more than 500 people from all demographics. Most are believed to be cases of forced-recruitment but ransom payments have been demanded. A demobilization expert negotiating release fees said ADF has asked for ransom payments of up to US$2,000 and kidnapped a number of high profile citizens including three local priests.

The situation is extremely worrying and solutions not forthcoming, said Ladyi, who narrowly escaped forced recruitment himself 10 years ago and has facilitated the successful demobilization of over 4,000 combatants in the last two years.

There are currently a number of ADF militants who wish to demobilize and return to Uganda, but they are locked in a political argument over the terms of the amnesty, Ladyi said. Amnesty has proven difficult with ADF to date. The Crisis Group documents failed talks in 2001 and again in 2007, although the 2007 talks did lead to the demobilization of some 200 combatants. Uganda's amnesty commission opened an office in Beni in 2005, in collaboration with MONUSCO (then MONUC).

But by 2006, no ADF had reported to the amnesty office and MONUSCO was considering closing it.  In 2008, ADF tried to recommence negotiations, but, delayed by the CNDP (pro-Tutsi) rebellion, they finally started in 2009 only to stall because the Ugandan government believed ADF members were merely seeking to profit. Three hundred people were dismissed for fraudulently claiming the Amnesty package that included 263,000 Ugandan shillings, a mattress and basic household items, according to local media reports.

"Politically, the process was not very well organized. Those who benefited from the amnesty did not give convincing testimonies when they got back to Uganda. MONUSCO and the Ugandan amnesty commission organized a sensitization campaign to ask ADF fighters to join the amnesty process. Many challenges affected the impact of the process. The time limitation, politics and security situation in Uganda did not allow the success of the process", says Ladyi, who is currently waiting on the Ugandan government's next move.