One week after heavy rains triggered large-scale flooding across much of the Philippines capital, Manila, and surrounding coastal areas, officials are still struggling to assist tens of thousands in need.

"It is fair to say we are working hard to try and provide for all those in need," presidential spokeswoman Abigail Valte told IRIN on 26 August. "Our future challenges are to make sure these communities are prepared for situations like this."

Torrential rain brought on by Tropical Storm Trami pounded the northern island of Luzon from 18 August, dumping over two months of rain in a matter of days and inundating six regions, including Manila.

Roads were turned into rivers, as the mega city of 12 million ground to a halt. Schools were shut for a week, and government offices and private businesses were closed, adding to the economic cost of the disaster.

According to the National Disaster Risk Reduction and Management Council (NDRRMC) in Manila, 25 people have died from the flooding, while 2.9 million have been affected.

As of 26 August, more than 78,000 people are scattered across 359 evacuation centres, mostly schools, while more than 231,000 are staying with family and friends.

The flooding came as Luzon was still trying to recover from the effects of Typhoon Utor, which sliced through the populous region days earlier leaving at least 11 dead and resulting in heavy damage to agricultural areas.

Damage to agriculture caused by Typhoon Utor has reached over US$22 million, while the most recent floods are estimated to have caused $14 million of damage so far, according to NDRRMC.

"Water has subsided in some areas. But while many [of the displaced] had gone home, there are still people in evacuation centres because their houses were totally destroyed or swept away by floodwater," Gwendolyn Pang, secretary-general of the Philippine National Red Cross, told IRIN.

More than 1,500 homes were damaged or destroyed, and some villages in Cavite, just south of Manila, are still under a one or two feet of water.

"In the coming days, we need to monitor the health conditions, closely paying attention particularly to leptospirosis cases," she said.

Leptospirosis is a water-borne bacterial disease that is commonly spread through the urine of rats. It causes kidney damage, meningitis, liver failure, respiratory problems and in extreme cases death, if left untreated.

Residents use a makeshift raft to relocate children in this flooded section of Manila. Two weeks after unprecedented flooding in Manila and surrounding areas, the country has again plunged into crisis after continued rains by tropical storm Parma caused f 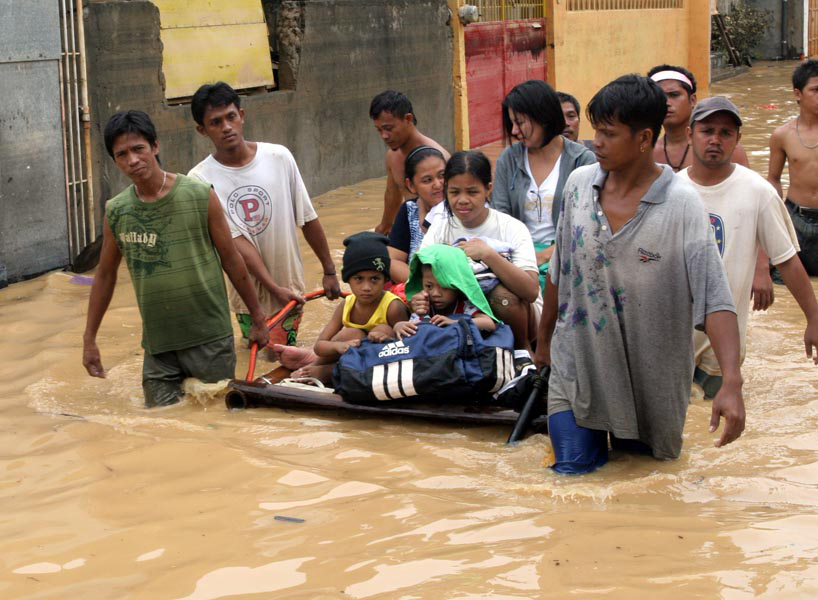 Infections are usually widespread during flooding as many affected residents wade in floods in search of food or assistance, Pang said.

"There are still houses submerged, especially those in coastal areas," she noted, adding that if the water became stagnant over the next few days measures to combat mosquito-borne dengue fever would be needed.

Most of those affected lived in shanty towns close to waterways. They would either have to rebuild their homes or be relocated to safer areas.

"They need urgent support in terms of resettlement. They had lost their belongings - they need basic home supplies like hygiene kits, kitchen sets, sleeping mats, blankets, water containers, among others," Pang said. "These are simple things that a family needs to restart their lives."

Social Welfare Secretary Corazon Soliman acknowledged that one week on, the situation remained dire and in the early recovery stage. Aid workers have been so overwhelmed that she had had to issue a public appeal for more volunteers to help repack some 100,000 food packs for immediate delivery to the affected areas.

Meanwhile, for Lito Ibadlit, a village council member in the heavily hit coastal township of Kawit, south of Manila, the government's response has been lacking. He said many had yet to receive official aid despite a pledge by President Benigno Aquino that vital lifelines would be restored.

The floodwater around his village had only receded four days after the heavy rains, leaving a thick muck that had been difficult to clean or disinfect.

"We've been so traumatized here, specially the children. We want to give a semblance of normalcy, but how can you when you are still washing clothes soiled with mud?" Ibadlit said. "Damage has been so widespread that many of us do not know how to begin rebuilding."

He appealed for portable toilets to be sent to the area, as all household toilets were clogged, and while there was water in the tap "it's brown and smells," he said.

Kawit is a coastal area where at least two rivers flow into the sea. But because of years of riverside development, the dumping of rubbish and silting, floodwaters have been slow to recede.

"We thought we'd never experience Ondoy [local name for tropical storm Ketsana] but I guess we spoke too soon," he said.

Ketsana resulted in similar deadly floods that swamped 80 percent of Manila in 2009. Along with another storm that came a week later, the disaster left over 1,000 dead with the World Bank putting the cost of recovery and reconstruction at over US$4 billion.