The UN and others have welcomed recent peace talks aimed at reaching a cease-fire in Myanmar's conflict-affected Kachin State, but building trust will take time, say experts.

On 31 May, the Burmese government and the Kachin Independence Organization (KIO), which has been fighting for greater autonomy for decades, agreed to further dialogue and talks on the resettlement of tens of thousands of internally displaced persons (IDPs).

According to the UN Office for the Coordination of Humanitarian Affairs (OCHA), there are more than 85,000 IDPs in Kachin and Shan states (both in the north), including over 50,000 (58.5 percent) in areas controlled by the Kachin Independence Army (KIA), the military wing of the KIO. Many others are staying with host families.

Over the past two years, hundreds have been killed in the conflict and there has been extensive damage to livelihoods and infrastructure.

According to the recently released inter-agency Kachin Response Plan, an upsurge in fighting in late 2012 triggered the displacement of several thousand more people.

Since the resumption of peace talks in February, fewer have been displaced, but there have not yet been significant numbers of IDPs returning to their homes due to ongoing tensions, lack of livelihood opportunities, and landmines.

UN special adviser Vijay Nambiar, who was an observer at the talks, hoped the agreement would allow the two parties to address the concerns and needs of Kachin State's 1.4 million people.

But despite the deal, analysts say there is still acute mistrust between the two sides.

"The Kachin had a ceasefire for 17 years and waited for a proper dialogue about the future of Burma, whether it should be a federal union or a centrally-controlled unitary state," Myanmar analyst Bertil Lintner told IRIN. "Nothing happened - their parties were not even allowed to participate in the November 2010 election, and then, in June 2011 the Burmese army launched an offensive against them."

Since 2011, 14 peace talks have been held between the government and rebels, including five in China. A major obstacle in moving forward is the government's push for a ceasefire and development before political discussion, say experts.

Meanwhile human rights violations are continuing on both sides.

"HRW and many other groups documented very serious human rights violations by the Burmese army and the KIA, some of them tantamount to war crimes, and the most important thing is these abuses must stop immediately," added HRW's Mathieson.

What underpins the conflict?

Myanmar (population 57 million and home to 135 ethnic groups) is a resource-rich country, and Kachin State is endowed with jade and timber.

"It's no question that access to and control of resources, whether those resources be mineral resources or hydroelectric resources or agricultural resources, has been a prime motivation for the Myanmar government and the army to go in and secure certain project sites or quarters or certain areas," said Paul Donowitz, campaign director for Earth Rights International.

Now, with sanctions dropped by the EU and key Western countries, leaders in ethnic areas long-ignored by the government are seeking greater control over their own resources.

"Access to or revenues from resources are a prime factor in their resistance to the Burmese government attempt to take control of the land," Donowitz said.

While in government areas, humanitarian assistance has been provided on a regular basis, travel authorization for international aid workers to KIA-controlled areas has rarely been granted, with the exception of a small number of ad hoc cross-line missions, say aid workers.

Children at play at an IDP camp in KIA-controlled northern Kachin State. More than 85,000 people have been displaced by the conflict between government forces and the KIA following the collapse of a 17-year-old ceasefire in June 2011 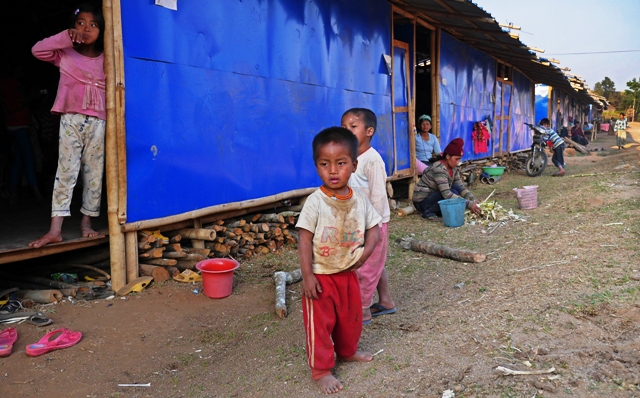 "The Burmese authorities have to get serious about permitting humanitarian assistance to reach vulnerable communities. They have been repeatedly blocking convoys of assistance," said David Mathieson, a senior researcher on Myanmar for Human Rights Watch.

According to a 29 May report by Refugees International, the Burmese government continues to block the UN and international donors from accessing KIO-controlled areas. Thus most IDPs in Kachin State are largely dependent on local community based organizations (CBOs) and religious charities for basic needs, including shelter, food, health care, water and sanitation, access to medicines, education, and protection.

For even the best equipped agencies, accessing IDP camps in KIO-controlled areas can prove difficult. Many camps are in remote areas at high altitudes, and during the rainy season (May to October) roads are almost impassable. Supplies often need to be transported by mule, making the process slow and complicated, and hampering the ability of CBOs to do their lifesaving work, the report said.

Many observers cite the government's refusal to allow international aid to rebel-controlled areas as a major barrier to peace.

"Many talks have been happening between the two sides, but during the negotiations only Myanmar government officials and military leaders have been involved. Without mediators, who can say if they are doing something wrong," said Mary Tawm, head of Wun Pawng Ninghtoi (WPN), an umbrella group of eight Kachin aid agencies working with IDPs.

Have the Kachin been radicalized?

Experts agree that trust-building is essential on the road to peace - something that was dealt a severe blow in December when Burmese forces started a major offensive on KIA-controlled hills outside the de-facto capital Laiza.

Gen Guan Maw, KIA's deputy commander-in-chief, is adamant that both Kachin's military and civilian population are determined to defend their territory.

"The thoughts not only of the KIA soldiers but the population in general was that the bombardment was an attempt to eliminate the Kachin people, so the morale of the soldiers and civilians is now that no matter how much difficulty we have to face, we will not give up this mission," the general told IRIN recently from Laiza.

"There is no doubt that the Kachins have been radicalized by what has happened since 2010," Lintner said, a reference to when pro-KIO politicians were removed from the ballot ahead of the November 2010 elections after KIA refused to be merged into a government-controlled border guard force. "The KIO, which before the ceasefire was seen as corrupt, with dwindling popular support, now seems to have the entire Kachin nation behind its policies," he said.

The latest peace talks included plans to establish a Joint Monitoring Committee, and participation in it of representatives of the UN and 11 of Myanmar's leading ethnic groups, including the Kachin.

"They [the KIO] are ready to come to political dialogue and a peaceful solution but want to ensure the new agreement is concrete compared with the agreement they made 19 years ago with the Burmese government," said Nyo O Mint, a member of the government peace team.

Last week's agreement saw the first meeting between the government and the KIO inside the country since conflict broke out in June 2011. In January, the Burmese government announced a unilateral ceasefire. A month later, the parties held talks in China, where they agreed to work on an overall framework to de-escalate the conflict.