Join us this Monday for an online conversation
AMMAN/DUBAI

Thousands of people are gathering in villages in southern Syria, unable to seek refuge in Jordan because of insecurity along the border or, according to some, new Jordanian security measures.

In Nasib village, just 2km from one of four border crossings between Jordan and Syria, there are 10,000 displaced people waiting to leave Syria, according to village imam Abu Omar. He said government security forces abandoned the village “long ago”.

The area surrounding the village is very tense, with the sound of heavy artillery “louder than ever”, according to a local Jordanian newspaper. On several occasions in recent months, the surroundings of the village have been shelled or hit by gunfire. Just yesterday, Abu Omar said, a rocket fell in the village, causing minor injuries.

Despite the insecurity, he said, for the last seven days, Syrians attempting to cross the border have been turned back, told by border officials that the Jordanian intelligence services are currently refusing any entry, except emergency medical cases.

However, the number of Syrians fleeing to Jordan without documentation has dropped dramatically in the last week, from up to 2,500 per day to “all but zero”, according to the UN Refugee Agency (UNHCR). (100-150 Syrians have, however, entered daily at official crossing points with passports, according to Alhmoud.)

A village under strain

Before the Syrian conflict began two years ago, Nasib was a small border crossing, home to 10,800 people, Abu Omar said. Some 5,000 of them left during the course of the conflict, only to have their homes filled by double the number of people, displaced by violence in other areas of the country.

In the last week, Abu Omar said, an additional 10,000 arrivals - coming from as far as Idlib and Aleppo provinces in the north - have put a strain on village resources.

“Displaced people used to stay in the collective shelters for one or two days and then continue on to the crossing,” he told IRIN over a scratchy phone line from Syria. “But since the border was closed, they are staying and waiting… Some families are living between the mosques and the streets.”

Over the past two years, Syrians have become accustomed to making do with less; and the residents of Nasib have long been sharing what they have with newcomers in need. But the few commodities that used to come across the Jordanian border have all but stopped in the last week, leading to food and water shortages in the village, Abu Omar said.

Today was the first day in more than two weeks, he said, that the village had flour with which to make bread: “The necessities of life are non-existent.” International humanitarian assistance does not reach these parts, he added.

Government and rebel forces have been battling for control of areas south of Dera’a for the past few months, but in recent weeks, the government has reportedly launched an offensive to retake areas previously “liberated” by the rebels.

Displaced Syrians at Atma Camp on the Syrian side just over the border with Turkey on December 2, 2012. Atma has become the temporary home to more than 11,000 people who have fled the violence as war flared in Syria 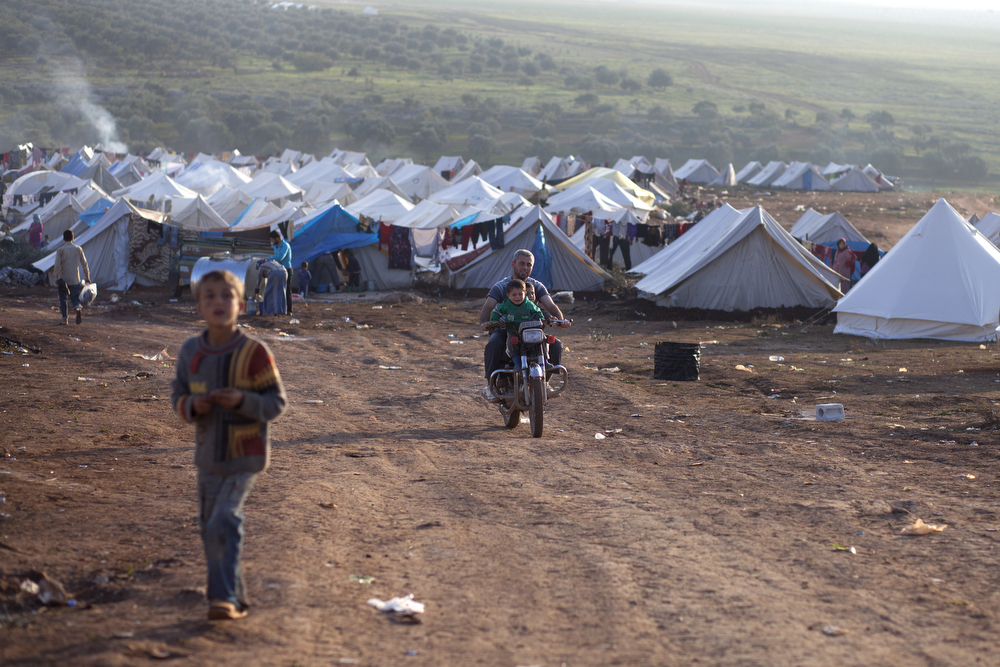 One Syrian family that arrived in Jordan 10 days ago told IRIN the border was open but that the rebel Free Syrian Army had lost control of the area. People were scared to move inside Syria because of violence and because the government was back in control, the family said. Abu Omar said freedom of movement, even between villages, was very limited.

Aid agencies told IRIN insecurity in the border area could be deterring people from trying to get into Jordan.

In addition to the Syrians stuck in border villages, hundreds of Palestinians cannot leave Syria because of Jordanian regulations prohibiting them entry into Jordan.

In Jamleh village, for example, just east of the Israeli-occupied Golan Heights, some 300 Palestinian refugees who attempted to leave Syria are stuck in difficult conditions. Most are now staying with host families, though some have managed to reach other villages where they are renting homes; others have no shelter at all.

Humanitarian assistance to them is limited because of the dangers accessing the area.

According to the UN, 4.25 million people are displaced internally within Syria. Another 1.5 million have registered as refugees in neighbouring countries and in North Africa.

At a press conference in Amman on 22 May, Syria’s ambassador to Jordan, Bahjat Sulieman, told reporters the Syrian refugee crisis has been “exaggerated” to put pressure on the Syrian government, saying that Syrians were not leaving the country for “real humanitarian reasons”, but rather for political ends.

He declined to comment on reports of Syrians stuck on the Syrian side of the border.