Tsotleho Befole, 24, travelled from the highlands of Lesotho to neighbouring South Africa twice in the past year, searching for work in the mines. Both times it proved fruitless.

“They said I needed a South African ID to get work. I only have a Basotho passport… [But] there is no work in Lesotho. Nothing,” he told IRIN.

“The only work is down there,” he clarified, pointing to a fish farm at the Katse Dam.

The dam is part of the Lesotho Highlands Water Project, the continent’s largest water transfer system. The $16 billion, 30-year project is one of the country’s most divisive issues. Proponents advocate benefits like improved road infrastructure, hydro-electricity and tourism, while opponents point to the forced resettlement of communities, loss of arable land and biodiversity, and risks associated with seismic activity.

Chief Mamphole Molapo, who presides over eight highlands villages, told IRIN the Katse Dam had provided mixed blessings. “Before the dam, life was good, although there were no roads. Trees grew in the valley, and we could get wood, but now they are covered with water,” she said. “When we want wood, we have to put our hand in our pockets. There are shops now and some benefits from tourism, but then there is a lot crime.”

But with the country plagued by unemployment - estimated at between 25 and 42 percent - the dam is beginning to offer an unexpected benefit: jobs.

For decades, Lesotho highlands residents have relied on South Africa’s mines for work, but these jobs are increasingly unavailable. At its peak in the late 1980s, about 125,000 Basotho migrants worked in South African mines; by 2011, this number had dropped to 41,427, according to the Central Bank of Lesotho. The International Monetary Fund said the decline is “partly because of a shift toward the use of South Africa’s local labour.”

Mabusetsa Lenka, head of the water, justice and environment programmes at the NGO Transformation Resource Centre, told IRIN that during Katse Dam’s construction, sustainable employment opportunities were not considered. 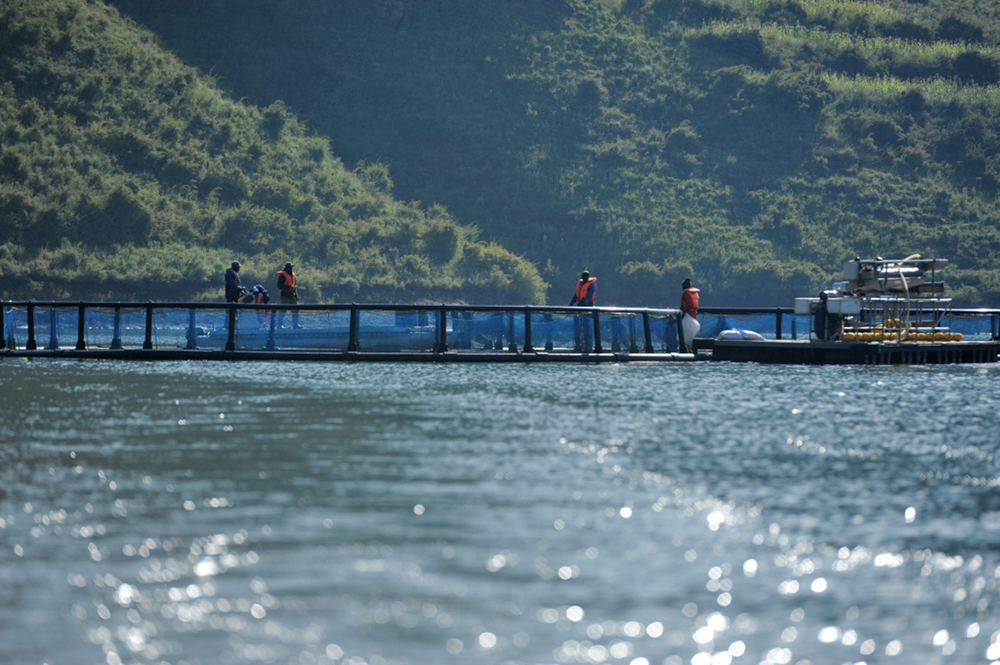 “When the project was conceived, it did not include economic benefits by either turning the project into tourism industries or improving agricultural produce [through irrigation].”

Yet some employment opportunities are emerging.

“Right now something that is being tried is fisheries. This could be a viable employment opportunity, provided the communities are empowered to participate in such income-generating activities,” Lenka said.

Ncholu’s hook-and-line fishing contrasts starkly with the output of the nearby Katse Fish Farms (KFF), the first company to introduce aquaculture on Katse Dam. KFF generates 300 tons of rainbow trout each year, and aims to increase this to 1,200 tons by 2017.

Jabari Kadafi, a former taxi driver now working for KFF, told IRIN his monthly salary is 1,500 maluti ($164), a good income in Lesotho, which he uses to support his three children.

A second fishery, Highlands Trout, has invested $8.8 million in its operations since 2005, creating 62 permanent jobs.

“We are eying to maximize job creation in Lesotho,” Fred Formanek, one of the company’s directors, told IRIN. Annual production is expected to increase from the current 500 tons to 3,000 in coming years. By the end of 2014, the company expects staffing levels to be in excess of 100 people, Formanek said.

"When the project was conceived, it did not include economic benefits [for local communities]"

Highlands Trout has established primary processing facilities for gutting and filleting, and there are plans to move to secondary processing, such as smoking and curing, which “will see staffing levels go up significantly,” he added.

Fisheries can present environmental risks, but KFF and Highlands Trout are required to monitor their environmental impact with daily water quality tests. The trout raised are triploids - sterile fish - meaning that, should they escape, they would not overtake local varieties. The fish are also vaccinated to prevent disease.

As part of an agreement between KFF and the community, 0.45 percent of the value of production is deposited in a community trust, under the auspices of the KFF Steering Committee, said KFF operations manager Mike Kruger. The steering committee has representatives from the community and the Lesotho Highlands Water Project.

As a bonus, she said, after each bimonthly harvest, “lots of fish - more than a hundred - are handed out to us. People prefer eating trout to yellowfish. The elderly have no teeth, so they can’t eat yellowfish because they are too bony”.