Tens of thousands of people disabled by shrapnel and landmines during South Sudan’s two-decade-long war with Sudan and thousands more disabled through disease and accidents are struggling to find support in Africa’s newest country, where proper healthcare and funding are in short supply.

An estimated 50,000 people in South Sudan are physically disabled, according to the International Committee of the Red Cross (ICRC).

Aside from the Sudan People's Liberation Army's (SPLA) "wounded heroes" programme, which provides a small stipend to ex-combatants, there are scant services for South Sudan's disabled, say staff at the Sudan Disabled Rehabilitation and Development Agency (SDRDA) in Rumbek, capital of Lakes State.

"People with disabilities are being discriminated [against at all stages] of life, at household decision-making levels and with public services... They are left behind, actually, like for clothing, even food," said SDRDA Director Hakim Cipuonyuc.

"If she has grown up, sometimes you see few people have the desire to have social relations [with her]. And when she gets pregnant, no one has the desire to marry her," Cipuonyuc said. "She is just left that with that kid and no one takes responsibility [or] care of that child."

Cipuonyuc's colleague John Maker said, "Most of the disabled are illiterate. They are not educated. They don't know their rights even, so they don't have a voice to raise their concerns in the community."

"Some of them end up [committing] suicide... as they are not considered in the family, in the community," he added.

SDRDA's awareness officer, David Kuac, himself disabled by polio, says that in the culture of the Dinka people - South Sudan's dominant ethnic group - there are often "bad attitudes towards people with disabilities".

"First, when a child with a disability is in the family, that family calls that child a curse from God, maybe as something that has been done wrong by the parents," he said. "The child is kept indoors so that he or she is not seen, and stays there until dying or just suffering there without the notice of the government or the entire community."

"I used to go and defecate at a nearby place [where] people would [be able to] look at me - like children and my wife [could see], as I couldn't get anywhere else," said Manyang Ader, describing the conditions faced by those with disabilities.

Adler’s leg had to be amputated following a buffalo attack. "I'd just stay in one place as I couldn't get around, and I wouldn't be able to do any kind of job - I just crawled around and didn't bring anything to the family," he said.

Even those few disabled people with good educations or vocational training are reportedly passed over for jobs.

"That was even the reason we formed SDRDA, so that we can work for the naturally disabled, and the government can work for those hurt during the war,” he added. SDRDA was founded 10 years ago as the only charity aiming to help disabled civilians.

But former soldiers say the army’s programme still has a long way to go.

"The salary is not enough for their children, most of whom are not even in education," said SDRDA's Cipuonyuc.

Nathan Wojia Pitia, director general of the Ministry of Social Welfare, says that there is a commission for war widows and orphans and wounded heroes, providing "low [cost] housing estates for the survivors", as well as a DDR Commission that deals with disabled veterans.

Lomouro Koko, recovering from a gunshot wound that ripped through his abdomen after being shot in Lanyiris, his village in Pibor county, when a tribal militia of up to 8000 armed Lou Nuer youths advanced on Pibor town to attack the Murle 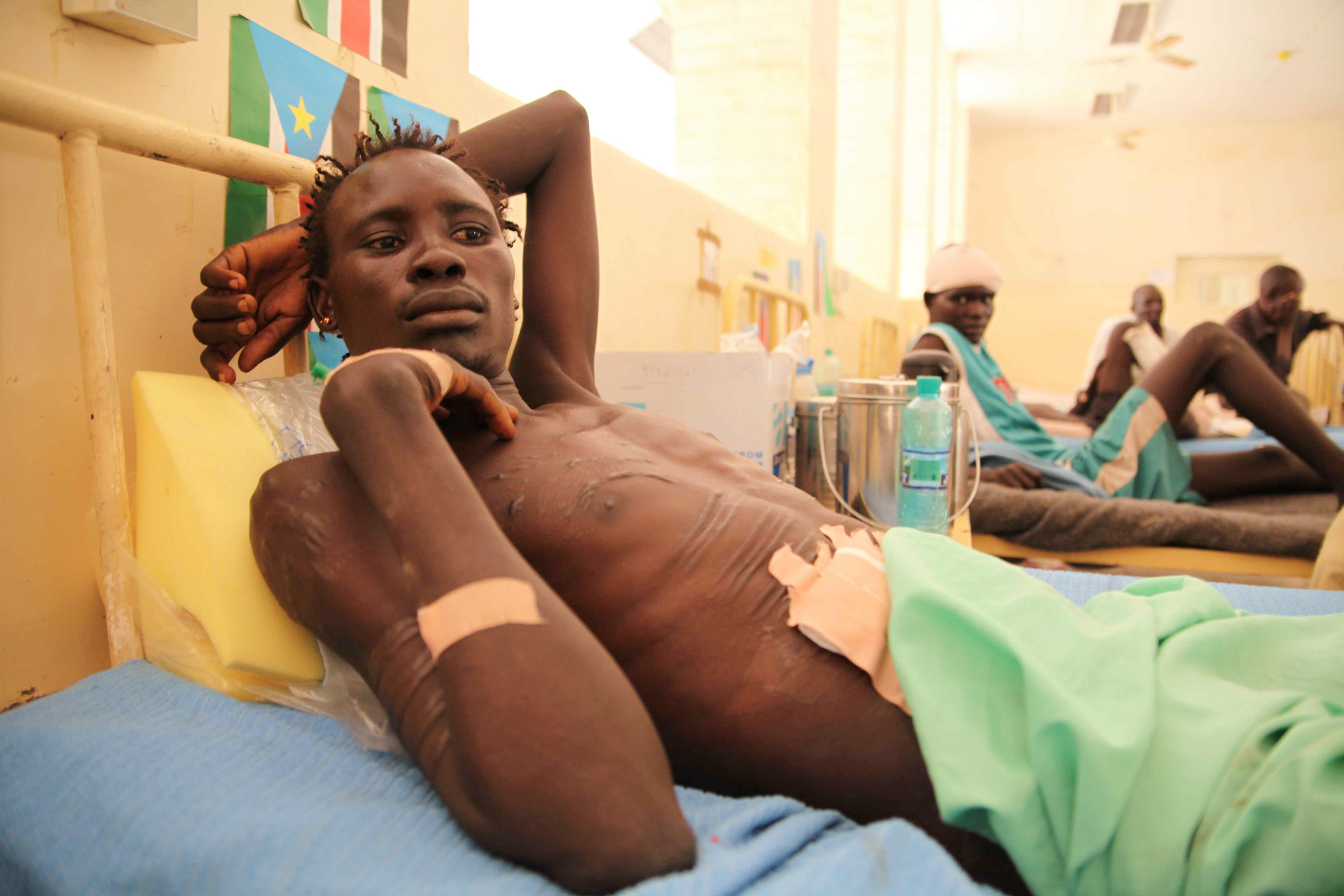 "DDR is also training the people with disabilities, especially the war wounded. And they are training them in economic as well as income generation skills, so that they are ready to do their own business after demobilization."

Pitia said his ministry's strategic plan for 2013 aims to cater to all disabled people, not just veterans: "Previously there was nothing like that... We thought we needed to mainstream it."

In mid-February, the government laid the foundation for a school outside Juba for deaf and blind students. It is calling on international NGOs to help with teachers and materials such as Braille books and abacuses.

"You can't do anything unless you have legislation - the policy for legislation must come on board… Just like women and children, disabled people are fighting for their rights," he said.

Currently the only official documents refer to people "with special needs", which is not sufficient, Pitia said. He added that there is need for services to move from urban centres like Juba to the rest of the country.

"The place is so vast - you can't afford every time to bring people from places like Upper Nile [State, along the border with Sudan] to Juba," he said.

But the government is strapped for cash; in January 2012, following a dispute with Sudan over oil transit fees, South Sudan shut down oil production - which accounted for 98 percent of its revenues. Without this income, no one believes the government will be able to provide services to the disabled, let alone basic health or education services to the rest of the population.

Until its programmes are up and running, the government will continue to rely on aid from organizations like the International Committee of the Red Cross (ICRC), which treated people throughout the war and opened up a centre for amputees in Juba in 2008.

The ICRC has treated over 2,000 physically disabled people in South Sudan and provided 1,000 people with physiotherapy. It has also fitted more than 400 artificial limbs for amputees, along with hundreds of orthotic devices such as back and leg braces, crutches, sticks and wheelchairs.

But when MCDI pulled out and handed services to the government, the clinic fell into disrepair. Now, ICRC is trying to rebuild the centre and wade through the case notes of those who have waited years for artificial limbs.

ICRC prosthetist Gerald Fitzpatrick said, "2,262, that's a lot of people that were serviced before [people who had been MCDI patients, some of whom will need prosthetic limbs] - that's enormous. Hopefully, with a slow start, we can start addressing all these patient files.”

ICRC's centres and surgical teams will also have to keep up with the flow of newly wounded.

In South Sudan's first year of statehood, "109 casualties from landmines and ERW were recorded, with the actual number likely to be higher due to underreporting”, the UN Office for the Coordination of Humanitarian Affairs (OCHA) said in its 2013 appeal.

Around a third of ICRC's clients who have received an artificial limb over the past four years were landmine victims. Tensions with Sudan over oil and borders remain high, and demining agencies say militias - which South Sudan alleges are backed by Sudan - are laying new mines as quickly as old ones are being removed.

Still, those lucky enough to receive treatment say their lives are vastly improved.

"I spent a long time not using my legs. I'm very happy now that people have come up with this artificial limb," said Ader, who now works as the amputee centre's night watchman and tends to his farm during the day.