Read about what we achieved.
JAKARTA

Indonesian health authorities are warning of increased health risks for thousands of people displaced by the volcano eruption in central Java.

The Mount Merapi volcano erupted before dusk on 26 October, spewing clouds of extremely hot ash and covering entire neighbourhoods on its southern slope.

At least 28 people are now confirmed dead and 90 hospitalized for burns, the Health Ministry said in a statement on 27 October.

Local media reported that a three-month-old baby died after experiencing respiratory problems, while at least 26 people are now being treated in hospitals with respiratory problems caused by volcanic dust, Nelis Zuliasri, a spokeswoman for the National Disaster Management Agency, said.

According to the World Health Organization, hot ash, gases, rock and magma cause skin and lung burns, asphyxiation, conjunctivitis or corneal abrasion, as well as acute respiratory problems.

In the case of ashfall, particularly with fine particles, bronchial asthma and other chronic respiratory conditions can be aggravated in children as well as in adults, the UN agency says.

As of 27 October, more than 22,000 villagers are staying in 10 government-run shelters in three districts - Magelang, Klaten and Boyolali - outside the 10km danger zone.

"Displaced people are prone to health problems such as upper respiratory infection, coughs and diarrhoea," Bondan Agus Suryanto, a doctor working with the Indonesian Red Cross in the disaster zone, told IRIN. So far, however, they had yet to see widespread cases in 10 of 60 barracks in four districts - Magelang, Klaten and Boyolali and Sleman - housing the displaced.

Rescue workers arrive at the scene of the Mount Merapi volcano in central Java. 27 October, 2010. The volcano is the most active in Indonesia 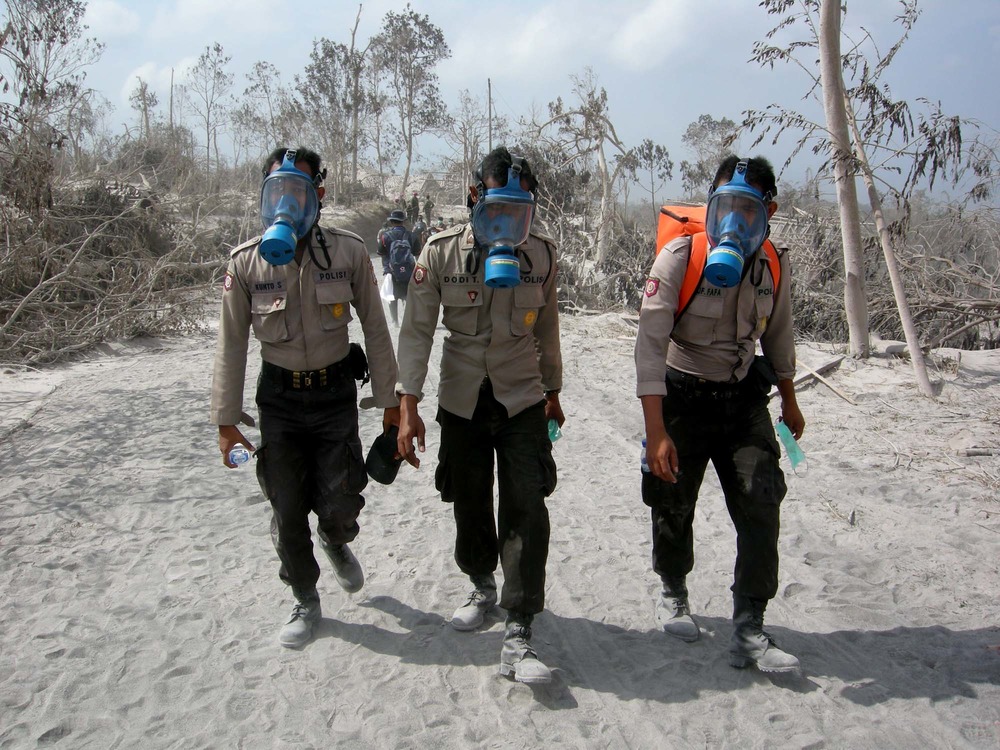 "Our efforts focus on evacuating victims, providing health services and preparing shelters for the displaced," the ministry said.

The head of the Center for Volcanology and Geological Disaster Mitigation, Surono, who like many Indonesians goes by only one name, said he had ordered a mass evacuation when the volcano showed increased activity early on 26 October, prior to the eruption.

"But villagers refused to be moved. I'm sad that people have to die," he said.

Taslim, a 45-year-old farmer who fled his home in Kinahrejo village when the volcano erupted, said he initially did not want to leave because he was afraid his livestock and crops would be stolen.

"I was feeding my livestock when I heard a siren. Soon I heard a thunderous sound and saw ash raining down," he said. "We ran as fast as we could but some people did not make it," he said.

Meanwhile, rescue workers began arriving on 27 October on Mentawai islands, where a tsunami triggered by a 7.5-magnitude earthquake the previous day killed 112 people and left at least 109 others missing, according to the National Disaster Management Agency.

The tsunami displaced 250 families, destroyed 179 homes and damaged 300 more, the agency said in a statement on its website.

Vice-President Boediono visited the Mentawais the same day to oversee the rescue effort.