A rough guide to why food prices keep going up

What is the crisis?

For the first time since 1973, the world has been hit by a combination of record high food and fuel prices. The price of oilseeds and grains, such as wheat and maize, has doubled since January 2006, with over 60 percent of the hike taking place since January 2008, according to the World Bank. Rice more than tripled between January and May 2008.

Prices have begun to fall as the 2008 crop is being harvested, but recent floods in US states producing maize and soya-beans, and poor weather conditions in Australia have slowed the decline.

Since 2001, oil has rocketed from US$20 a barrel to an unprecedented $140. The World Bank says oil prices are now higher than any time in the last century, not only pushing up the price of food in poor countries importing staple grains and fuel, but also eroding their capacity to buy food.

Why have prices shot up suddenly?

The short answer is that global cereal stocks have not kept pace with growing demand, and neither has the oil supply. Stocks of cereals have been declining worldwide since 2000, while demand has been increasing at two to three percent per year.

In the last two years, cereal stocks have fallen to levels last seen in the 1970s for two main reasons: firstly, major wheat-producing countries such as Australia suffered droughts in 2006 and 2007; secondly, the hike in fuel prices saw the US and many European countries offer subsidies to their farmers to grow grain for biofuel. The switch from growing food to growing fuel pushed up prices by 30 to 70 percent, depending on which study you read.

Some analysts have blamed high food prices on the burgeoning economies of China, India and some countries in sub-Saharan Africa, where more people can now afford to include meat and other animal products in their diet, which in turn has driven up the demand for grains used as feed.

However, the United Nations Food and Agriculture Organisation (FAO) says recent high commodity prices do not seem to have originated in these emerging markets: neither China nor India are big cereal importers in the 2007/08 season. In fact, China is exporting maize and India's wheat imports are relatively small.

Various food analysts say the production of grains has dropped because of rising chemical fertiliser prices, which have doubled and even tripled in some parts of the world, making it unaffordable to most farmers in developing countries.

Other analysts have attributed low cereal stocks to the cumulative effect of changes in the agricultural policies of developed countries, particularly in Europe, where farm subsidies have been shrinking, and a drop in investment in agricultural research to develop high-yield varieties since the 1990s.

But the price spikes recorded in 2008, particularly in rice, have been linked to export restrictions imposed by rice-producing countries, including India, China, Vietnam, Cambodia and Egypt, which together supplied around 40 percent of global rice exports in 2007, according to the International Monetary Fund.

Didn't anyone see the crisis coming?

Since 2006 the FAO has warned of a possible food price crisis in its periodic updates on global cereal stocks.

What has been the fallout of the crisis?

The impact of increasingly expensive food has been wide-ranging, deepening poverty levels and pushing even more people into poverty. According to a recent World Bank study, at least another 105 million across the world will become poor.

Simulations in this study suggest that in Africa alone nearly another 30 million people will fall into poverty: in Sierra Leone the food crisis has raised poverty by three percentage points, to 69 percent; in Djibouti, rising food prices over the past three years are estimated to have increased extreme poverty from 40 percent to 54 percent.

Various UN agencies have warned that unaffordable food could drive up the number of undernourished people in the world – already at 800 million - while poor people have begun skipping meals or switching to cheaper and lower quality cereals, affecting their health.

A recent FAO assessment in Somalia found that 2.6 million people - approximately 35 percent of the population, of which more than half are children - had been affected by a nutrition crisis caused by drought and prolonged conflict. The number of people needing humanitarian assistance in Somalia could reach an estimated 3.5 million - half the total population - by the end of 2008.

According to the World Bank, even stable, high-growth countries are not immune to the damaging effects of escalating food prices on child nutrition. In India, for instance, 47 percent of children are stunted – double the rate in sub-Saharan Africa, where 24 percent experience delayed development - and nearly five times that of China, where just over nine percent of children are stunted.

The UN Children's Fund (UNICEF) says 1.5 to 1.8 million more children in India are at risk of malnourishment as households cut back on meals or switch to less nutritious foods to cope with rising prices.

Expensive food and fuel have also had political fallout: since 2007, high prices have sparked violent protests in at least 17 countries, mostly in Africa; earlier in 2008, the government of Haiti fell after week-long protests.

The Organisation for Economic Cooperation and Development (OECD), which is committed to promoting democracy and assisting developing countries, noted that each 10 percent increase in the prices of cereals adds nearly $4.5 billion to the import bills of poorer countries.

An FAO study recently noted that at least seven countries - Gambia, Liberia, Mauritania, Niger, Zimbabwe, Jordan and Moldova - which have all chalked up high levels of debt - could be forced to spend as much as two percent of their gross domestic product on importing food. Most of these countries are already struggling with chronic hunger, so soaring food costs hold the threat of political instability.

Yes, logically they should. But very few subsistence farmers in Africa produce surplus food, and are mostly net buyers. Simulated studies by FAO found that rural households in countries where land was not equitably distributed - which is the case in most developing countries - would be worst affected.

The World Bank has also found that although farmers who produce surplus food might be better protected, even they might not benefit from the food price surge because the cost of inputs like fuel, fertiliser and transportation often rose faster than world market prices for food.

Agriculture experts say that unless governments subsidise inputs, poverty levels in rural households could deepen, and the prospects for beefing up global cereal stocks look bleak. The World Bank has called for subsidies aimed at poor and small-scale farmers for a limited period to boost yields, as part of a package that should include investment in extension, research and rural infrastructure.

When will food prices come down?

High prices may boost production in 2008, which in turn may push down prices, provided there are no natural disasters. But any major expansion of agricultural land in the short term is unlikely, says FAO, and any increase in plantings of one crop would need to occur at the expense of another. So, while the price of a certain food commodity might fall, the prices of others might increase.

A farmer plows his field in Myanmar's cyclone-affected Ayeyarwady delta. The country's agricultural heartland was badly affected by Cylone Nargis in May 2008. 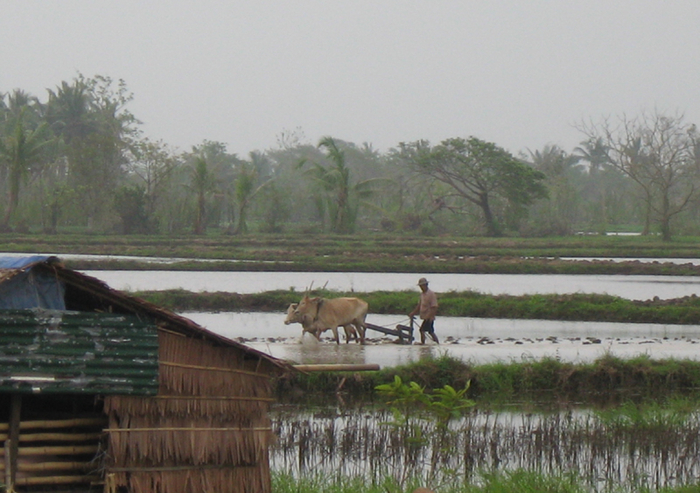 Lynn Maung/IRIN
A farmer plows his field in Myanmar's cyclone-affected Ayeyarwady delta. The country's agricultural heartland was badly affected by Cylone Nargis in May 2008.

Short-term price forecasts for food commodities are difficult because they are linked to other markets, such as energy. A recent FAO/OECD medium-term outlook for major agricultural commodities said prices were likely to remain high for the next decade.

Can the situation be turned around?

Many agriculture experts are pushing for a new "Green Revolution", which doubled cereal production between 1970 and 1995 in South Asia. Money and investment in developing high-yielding varieties of maize, wheat and rice, combined with access to pesticides, irrigation and fertiliser, could have a dramatic impact.

But this would require huge amounts of money: between $15 and $20 billion a year, according to UN Secretary-General Ban Ki-moon.

Aid agencies and other non-governmental organisations are lobbying the G8 and other leaders meeting in Japan this week to beef up investment in agriculture in developing countries.