As the Taliban regained control of Afghanistan late last summer, Qassim Rahimi packed the odds and ends of his life into bags and joined the crowds forming at the gates of Hamid Karzai International Airport in the capital, Kabul. Forty-eight hours later, the 33-year-old left his lifelong home behind in the belly of an American military transport plane, bound for a new and uncertain beginning in the United States.

When the Taliban fell in 2001, his people, the Hazara – who had been persecuted under Taliban rule – welcomed regime change from their homeland in the mountains of central Afghanistan. Over the following years, Rahimi pursued a career in the country’s growing journalism sector, eventually moving to Kabul for a job in a press office of the Western-backed Afghan government.

As the Taliban swept back to power last summer, fighters seized the office building where Rahimi worked, including the journals, credentials, and computers that were inside. Reports of retribution attacks against people associated with the Western-backed government poured in, and Rahimi – who had friends and colleagues who were assassinated by the Taliban in the past – feared he would be a target.

His escape from Kabul was the beginning of a whirlwind three-month journey, taking him through military bases in the Middle East, Europe, and, finally, Wisconsin, before landing him in Kansas City, Missouri – a city of around 500,000 people in the Midwestern US – in November.

Rahimi is one of around 76,000 Afghan evacuees who have arrived in the US following the US withdrawal from Afghanistan and the Taliban’s return to power last August. The evacuees are not technically refugees because they did not go through the US refugee resettlement process, which takes place while people are outside the US. But to help the Afghans integrate into new communities, the US is relying on a network of refugee resettlement agencies in communities across the country.

That network, however, was decimated during Donald Trump’s presidency and has yet to fully recover. As a result, at the end of January – five months after the evacuation effort from Kabul finished – around 12,500 Afghans were still living on military bases in the US waiting to be matched with resettlement agencies to help them find housing and begin settling in. Following a push from the administration, that number has since fallen to around 4,000. 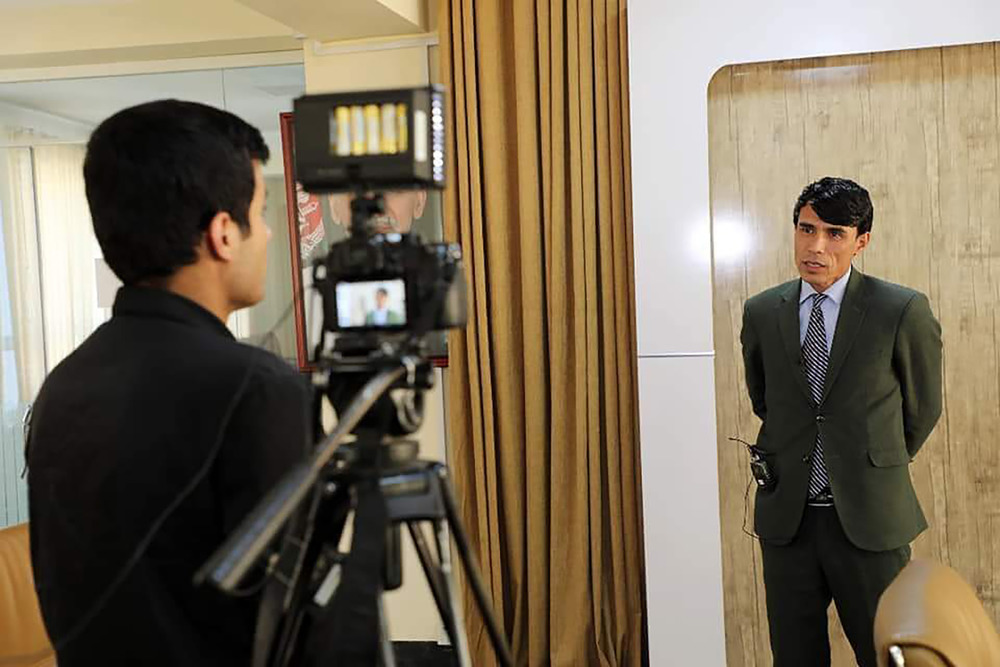 At the same time, the administration of US President Joe Biden has set the refugee resettlement ceiling for fiscal year 2022 (which runs October-September) at 125,000. Advocates have praised the target, but many also worry that – due the damage done during the Trump years – the evacuees and newly arriving refugees won’t be able to receive adequate support.

Rebuilding capacity “is not like a lightswitch thing to flip”, Kelly Agnew-Barajas, director of refugee resettlement for Catholic Community Services of New York (CCSNY), a resettlement agency in New York City, told The New Humanitarian. “Agencies have experienced such significant reduction in federal revenue because of these truly unprecedented and drastic cuts in resettlement.”

The primary aim of federal assistance for refugees admitted to the US is to put them on a path to economic self-sufficiency. During their first 90 days in the country, government-funded resettlement agencies cover costs ranging from rent and furnishings to clothing and transportation to job interviews. After that, refugees are expected to be able to cover these basics on their own.

Support, however, doesn’t completely dry up. Through a mixture of federal grants and private donations, resettlement agencies continue to provide services – such as professional development training, language and financial literacy courses, and mental health counselling – to support the integration process. Refugees are technically entitled to this aid for five years, but availability is heavily dependent on the amount of federal funding allocated to service providers.

“Five years is really around the time that someone would naturalise as a [citizen],” Agnew-Barajas said. “Part of the thinking built into this timing is maybe someone's family is arriving, or they are in crisis, or they need just extra support for some reason.”

Between 2017 and 2020, however, the Trump administration slashed refugee admissions to historic lows and starved resettlement agencies of funding. Around 130 resettlement agency offices – or nearly 40 percent of the total in communities across the US – closed their doors, and many others had to lay off staff and shrink their operations.

Among those who lost their jobs or were forced to move on were staff members with the language skills and cultural competencies to communicate with refugees, connect with their experiences, and effectively run job training, English courses, mental health services, and legal support, according to Agnew-Barajas.

In many cases, as staff sizes and operations shrank, the connections with local governments, businesses, medical clinics, other NGOs, and religious institutions that organisations relied on to help provide services and integrate people into communities atrophied and dissolved.

Hass Agili, a refugee from Libya, experienced the consequences of this scaled-back support first hand. Now 38 years old, he arrived in New York in June 2016, shortly before the Trump administration entered office and took an axe to funding for refugee integration support.

As a gay man, Agili always faced the threat of persecution in Libya, but as the security situation deteriorated after the country’s 2011 revolution, he felt less and less safe. When a friend was executed by a militia because of his sexual orientation in 2014, the danger felt closer than ever, and Agili made a difficult decision: “I knew that next time I left, I should try to find a way not to come back home,” he told The New Humanitarian.

With little time to plan, Agili flew to Lebanon on a tourist visa in August 2014 where he stayed for three years as his application for protection made its way through the US refugee resettlement pipeline – which was backlogged and full of bureaucratic hurdles even before Trump took office. During that time, Agili couldn’t work, and public services for refugees in Lebanon are virtually non-existent. By the time he reached the US, his resources were mostly depleted, like those of many other refugees.

As the Trump administration slashed funding, New York State – where Agili ended up – allocated money to try to plug programme budgets, but refugee resettlement agencies and their partners still struggled to stay afloat. It didn’t take long for Agili to feel the impact: Within six months of arriving in the US, he says almost all specialised services for refugees were gone.

“The stress that you go through here… you just feel like you're not moving anywhere.”

Instead, Agili was directed towards New York’s public welfare programmes for support – including healthcare, employment opportunities, and financial aid – instead of receiving professional development training, educational support, and trauma counselling from organisations with the specialisation and experience to know how to address his specific needs as a refugee. “There was nothing,” he said. “Nothing.”

Agili had been in his final term of medical school when he left Libya and was fluent in English. But in the US, his educational background was virtually worthless. Public employment agencies could only steer him towards low-paid, temporary positions, forcing Agili to live paycheck to paycheck.

His life stagnated, and his mental health deteriorated as unaddressed trauma from his past weighed heavy. He sought counselling on his own, but qualified therapists were expensive and his insurance would only cover a small portion of the price.

“There were no mental health appointments, sessions, or anything – regardless of what your experience was like,” Agili said. “Nothing run by either resettlement agencies or anybody else.”

As the COVID-19 pandemic hit in March 2020, Agili found himself consumed by a feeling of hopelessness. “The stress that you go through here… you just feel like you're not moving anywhere,” he said. “It's like a snowball, and then you just cannot take it anymore. You just feel so tired.”

In August 2020, Agili felt like he hit rock bottom. Only after he was admitted to an inpatient programme at a state-run facility did he begin receiving the mental health support he needed.

Safe, but not happy

When Biden won the 2020 presidential election, refugee advocates were hopeful. During the campaign, he had pledged to reassert America’s commitment to refugees. But one year in, his administration has so far done little to reverse the damage inflicted on the US resettlement system during the Trump years.

The US Congress has allocated specific funding to facilitate the integration of Afghan evacuees. But resettlement agencies are still in the process of rebuilding and scaling up their operations. The amount of federal funding available for programmes beyond the initial 90-day support period is still limited, and what happens to those who aren’t self-sufficient by the time aid expires depends significantly on which state they are in, according to Agnew-Barjas.

Read more → One year on, is Biden living up to his refugee and asylum promises

In Kansas City, where Rahimi was placed, the capacity of resettlement agencies is still limited, and becoming self-sufficient in just a few months' time seems an impossible task. There are so many details to attend to in such a short period of time: translating resumés, taking a driver’s test, understanding how taxes work, making professional connections, brushing up on English.

On top of that, Rahimi’s days are consumed with trying to figure out how to reunite with his wife, Samia – who has fled Afghanistan and is currently in India – and finding a way for relatives still in Kabul to leave. “Right now, I am safe,” Rahimi said. “But in terms of my psychological situation, I am not happy.”

For Agili, it took nearly six years for him to finally feel like he was getting his feet underneath him in the US. He has decided to restart his education and is currently enrolled in Columbia University studying neuroscience – taking on loans to cover tuition and hoping the investment pays off.

During an orientation meeting in Lebanon before he was resettled, Agili recalls being cautioned that he would have to rebuild his life basically from scratch once he reached the US. “We’re all hungry to start our lives,” he said. He never expected he’d have to do it with so little help.

This story is part of “Here to Stay,” a multimedia reporting series on the resettlement of migrants and refugees amid the global migration crisis. Produced by The GroundTruth Project with support from the MacArthur Foundation, Luce Foundation, and the Solutions Journalism Network, this series chronicles the challenges migrants face to resettle in new lands in the midst of a pandemic, highlighting approaches that immigrants themselves are employing to improve their quality of life, defend their rights and gain influence in their new communities.