Tigrayan rebel forces have called for an immediate ceasefire after withdrawing from towns across the Amhara and Afar regions amid a government offensive that has dramatically shifted the balance of Ethiopia’s devastating 13-month conflict.

In a letter sent yesterday to the UN secretary-general, Tigray’s president Debretsion Gebremichael said he has ordered troops to return to the northern region, where a federal blockade has left hundreds of thousands of people facing famine.

“We propose an immediate cessation of hostilities followed by negotiations,” Debretsion said in the letter, adding that he hoped the retreat would be “a decisive opening for peace”.

The government has not yet commented on the letter, but the withdrawal will likely ease a major humanitarian crisis that has spread across northern Ethiopia since the rebels – known as the Tigray Defence Forces (TDF) – pushed into neighbouring regions in July. 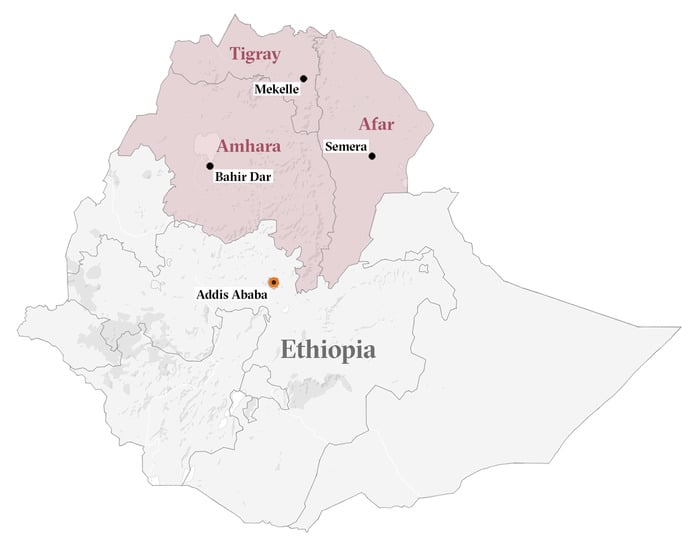 The New Humanitarian visited Amhara earlier this month as the TDF was retreating, speaking to hospital workers who described struggling to provide basic first aid services, and to residents who said they had lived for several weeks with little outside assistance.

Until just a few weeks ago, all the momentum had appeared to be with the TDF, which came close to reaching Addis Ababa. The months-long rebel push had seen more than half a million people displaced in Amhara, and over 250,000 uprooted in neighbouring Afar.

The rebels have been accused of a string of abuses during their operations. “They didn’t differentiate between farmers or trained fighters; they simply massacred,” said Seid Hassen, a resident of Teraf village in Amhara.

Hassen told The New Humanitarian that his 25-year-old son was among 21 Amhara civilians killed last month by Tigrayan rebels operating in concert with insurgents from the Oromia region.

Officials from the Tigray People’s Liberation Front (TPLF) – the ruling party in Tigray leading the rebellion – initially framed their retreat as militarily strategic but now say it was enacted in the interests of peace.

Federal officials have previously suggested talks might be possible should the rebels – who are withdrawing under a hail of drone strikes – return to Tigray and accept the legitimacy of the central government.

Still, after claiming to have secured a decisive military victory in recent weeks, Ethiopian government forces may be tempted to push further north into Tigray to take advantage of their gains.

The fighting seemed far from over when The New Humanitarian was in Amhara from 9-13 December. Military trucks carrying soldiers and supplies could be seen moving in the direction of the TDF retreat, while some areas recaptured by federal troops were temporarily seized back by the rebels.

In the Amhara town of Shewa Robit, local militias, meanwhile, said they would remain on guard for rebel remnants. “We will push them to surrender [until] the area will be secured,” said 48-year-old Bahere Kefele, his gun trailed on fields of wheat that snaked up rolling hills.

Drone attacks and a mass mobilisation

The Tigray conflict began in November 2020 after months of tension between the government and the TPLF, which dominated Ethiopia’s national politics for decades until Prime Minister Abiy Ahmed took office in 2018.

After initially retreating into Tigray’s mountains, the rebels bounced back in late June – an about-turn that saw Ethiopian government forces and their allies withdraw from most of the region amid reports they had committed widespread massacres.

The rebels then moved into Afar and Amhara, while striking an alliance with the Oromo Liberation Army (OLA). The two groups pushed towards the capital, triggering embassies to evacuate staff and urge their foreign nationals to leave.

The TPLF says the offensive was necessary to lift the months-long blockade – of humanitarian and commercial supplies in Tigray – that has created what the UN considers the world's worst hunger crisis in a decade.

But the TPLF strategy for breaking that blockade – through capturing Addis Ababa or by choking an economic supply route that runs from Djibouti to the capital – appears to have backfired as the tide of the war has turned in favour of the government. 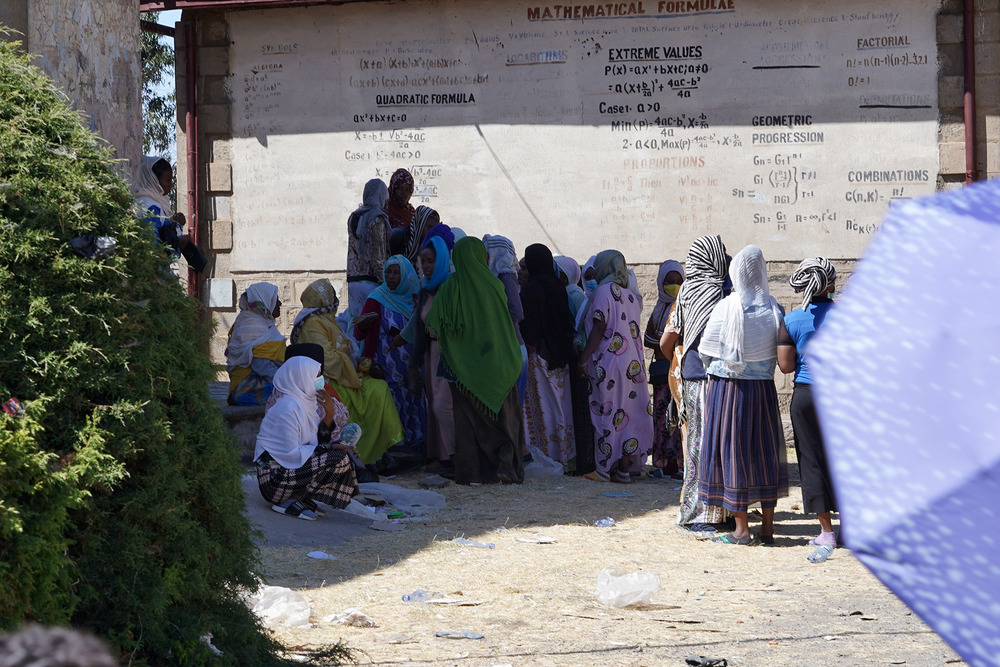 Maria Gerth-Niculescu/TNH
Over 1,000 displaced people have taken refuge at a local school in Debre Berhan in Ethiopia’s Amhara region. Tigrayan rebels have pulled out of the region after a months-long offensive.

It is unclear how exactly, though analysts say Amhara and Afar militia forces have proved hard to beat, while a federal recruitment drive – spurred on by Abiy’s visit to the front line – has borne fruit.

Recently purchased government drones have also played a role: On main roads in Amhara, The New Humanitarian saw the impact of drone strikes in twisted rebel tanks and military trucks, and in the corpses of dead fighters strewn on the ground.

The civilian toll of the conflict was also evident across the region. In Debre Berhan, which is 130 kilometres from Addis Ababa, more than 1,000 displaced people have taken refuge in a local school – one of dozens of makeshift camps in the region.

Camp resident Hawa Mohammed said she didn’t even have time to lock her front door when escaping a rebel assault in early November. “Our country got destroyed,” said the woman, her face wrapped in a white-and-yellow scarf.

In Mezezo – 65 kilometres north of Debre Berhan and close to where the TDF halted its offensive – residents said they hid in a forest for over a week while rebels occupied their village.

One woman said she was raped in her home when rebels entered the town, while another said she went into hiding after hearing reports of Tigrayan forces “harassing and raping women”. She later returned to find her home destroyed by an artillery strike.

TPLF leaders have previously denied targeting civilians, though promised to investigate abuses committed by individual soldiers. Amhara forces have, meanwhile, been accused of a new wave of detentions, killings, and forced expulsions of ethnic Tigrayans in the disputed area of western Tigray.

Looted aid and an empty hospital

Aid officials said they were able to dispatch some food while Tigrayan forces controlled towns in Amhara. Since mid-November, tens of thousands of tonnes of food warehoused in the Amhara town of Kombolcha were distributed within the region and onwards into Tigray.

Still, many Amhara residents struggled for weeks with no support, while the looting of supplies in Kombolcha and the nearby town of Dessie earlier this month have hindered relief efforts, according to aid groups.

A local Amhara official who was accompanying The New Humanitarian during the visit said Tigrayan forces were to blame for the theft, though TPLF leaders have denied responsibility in public statements.

A humanitarian official in Ethiopia with close knowledge of the situation said local residents of Kombolcha played “the main part” in the looting. The official asked to not be named, citing the risk of reprisals. 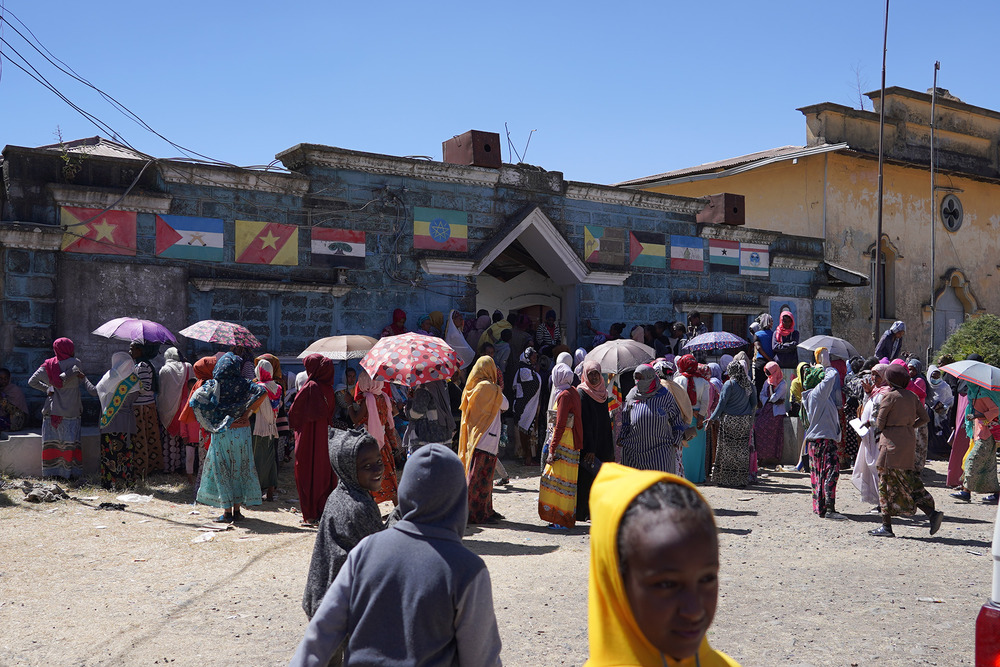 Maria Gerth-Niculescu/TNH
Displaced people outside a school in the Amhara town of Debre Berhan which is 130 kilometres from Addis Ababa, Ethiopia’s capital city.

Local government officials in Amhara said they expect food insecurity to rise in the coming months following delays in harvesting due to the fighting and after the alleged destruction of crops by rebels.

“Since the terrorist TPLF group entered our zone, the most damage has been done on crops in the [lowland] areas,” said Workalmu Akostre, head of the North Shewa zone agriculture office. “They came with the intention of destroying everything.”

Health services are also at a standstill across the region. In Dessie, a major hospital used by millions of people is currently tending to wounded Ethiopian soldiers, having previously been used by the rebels.

Shelves were almost empty at the hospital’s pharmacy, while machines used for ultrasound and blood cell counts had been stolen. Hospital staff said Tigrayan rebels took the supplies, but The New Humanitarian could not independently verify that claim.

“The hospital has nothing,” said Melaku Sete, an official in charge of managing its oxygen centre.

The humanitarian situation in Tigray is disastrous too. Journalists have not been allowed to visit the region by the government for several months, but UN situation reports have warned of “unprecedented” malnutrition and disease outbreaks.

The government has allowed 1,338 trucks carrying humanitarian supplies into the region since 12 July, which represents just 12 percent of what is needed, according to the UN.

The Tigray blockade has been described by officials at the US Agency for International Development – a major donor to the Ethiopia relief operation – as “perhaps the most egregious humanitarian obstruction in the world”.

Analysts and aid officials hope the TPLF’s call for a ceasefire – which comes as Security Council members are today set to discuss the situation in Ethiopia – will be accepted by the federal government.

Mediation efforts led by the African Union’s Horn of Africa envoy, former Nigerian president Olusegun Obasanjo, had previously shown signs of progress, at least in terms of engaging the belligerents.

Still, there are many hurdles to overcome. Tigray’s leadership has refused to recognise the legitimacy of the central government, while the TPLF has been designated a terrorist organisation by the federal parliament.

Territorial issues are also thorny. Tigrayan officials want to reclaim western parts of the region captured by Amhara forces during the conflict. But Amhara officials are unlikely to withdraw from an area they view as illegally annexed by the TPLF decades earlier.

Retaking western Tigray could also enable the TPLF to open a supply corridor to Sudan, which may be tempted to support the rebels as leverage in its dispute with Addis Ababa over the al-Fashaga border and the Grand Ethiopian Renaissance Dam project.

The TPLF has, meanwhile, warned that its army remains intact and would be capable of inflicting heavy losses on pro-government forces should they decide to push north into Tigray.

Back in Amhara, militia fighters said their jobs were far from over. “Unless we watch out carefully, [the rebels] may come back tomorrow,” said a fighter from Shewa Robit.