Reaching all those in need in conflict-hit northeastern Nigeria has long been a struggle for aid workers. But now – in addition to the hostility of the jihadist insurgents and a Nigerian military suspicious of humanitarian efforts – the US development agency has imposed controversial new restrictions on those who can be helped with the money it provides.

USAID, the biggest funder by far in Nigeria, introduced a clause late last year into all its grant contracts with tough new conditions aimed at preventing Boko Haram and the breakaway Islamic State of West Africa Province, or ISWAP, from benefiting from US assistance.

In practice, NGO officials say, this means aid agencies receiving USAID money risk falling foul of US anti-terror legislation if they don’t vet those in need and refuse help to all civilians they suspect could have had links with the jihadists.

That, aid workers worry, not only contravenes humanitarian principles, but is also impractical to implement in the field and could potentially put them in harm’s way.

The clause, obtained by TNH, states that all recipient agencies: “must obtain the prior written approval of the USAID Agreement Officer before providing any assistance... to individuals whom the Recipient affirmatively knows to have been formerly affiliated with Boko Haram or [ISWAP], as combatants or non-combatants”. 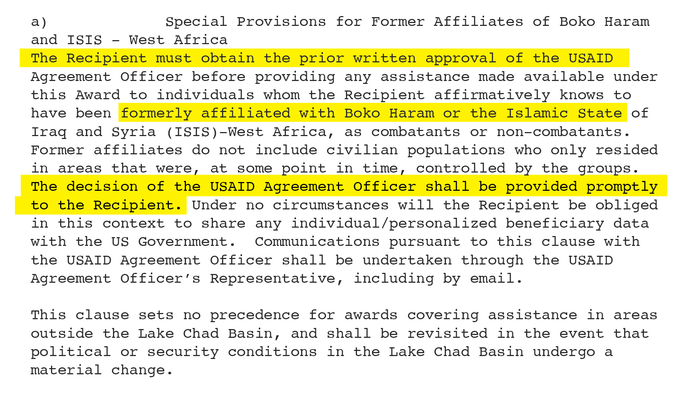 There is no clear guidance on what “formerly affiliated” means. The clause notes that it does not include “civilian populations who only resided in areas that were, at some point in time, controlled by the groups”, but, despite an emailed request, USAID provided The New Humanitarian with no further definition.

“Malnourished children come into our feeding centres and we assume among them are some who might be ‘formerly affiliated’,” said an aid worker, who asked for anonymity. “But, before we can treat them, we need to inform the USAID ‘agreement officer’ – I assume in Washington – and wait for feedback?”

UNICEF is the only UN agency in Nigeria to have turned down USAID funding based on the new clause. It has made up the financing shortfall from other donors and internal borrowing.

“UNICEF programmes are guided by the Convention on the Rights of the Child and by the humanitarian principles that are essential to the pursuit of its humanitarian mandate,” UNICEF emergency manager Nicki Bennett said in a statement to TNH.

The new language in USAID contracts is seen by objectors as running counter to the principles guiding humanitarian action – that aid should be based on need, and be neutral, impartial, and independent.

USAID’s restrictions are “hard to comply with for practical reasons”, said Jacob Kurtzer at the Center for Strategic and International Studies (CSIS). They are “also inconsistent with, in capital letters, humanitarian principles”.

In a statement to TNH, USAID said that it “strongly supports international humanitarian and human rights law as well as humanitarian principles”.

But, the US development agency added: “under US law, provision of assistance to designated terrorist organisations is impermissible. This special provision [the new clause] assists USAID in ensuring that we comply with our legal obligations while maximising our ability to provide humanitarian assistance to those in need.”

The United States is the world’s largest humanitarian donor, but its anti-terror legislation is dense, and the scope of what it outlaws under a concept of “material support” extremely broad.

“If it’s adopted by the Brits and Europeans, then we really are screwed.”

For humanitarian organisations, compliance has had a “chilling effect”, effectively limiting their “operational footprint and compelling them to engage in humanitarian action only in areas understood to be safe from legal risk”, notes a new CSIS report authored by Kurtzer.

In northeast Nigeria, where more than seven million people are in need of relief after a decade of war, aid workers fear that USAID’s restrictions may be replicated by other donors.

“They don’t have that kind of language yet, but they might do,” said one humanitarian official. “If it’s adopted by the Brits and Europeans, then we really are screwed.”

Kurtzer acknowledges the worry. “When it comes to terrorism, there is a tendency to adopt the most restrictive language,” he told TNH. “I’m concerned this expectation of vetting beneficiaries could become the norm.”

The counter-argument to the supposed sacredness of humanitarian principle is that aid agencies operate in highly political environments. Researcher Jessica Darden notes that aid can benefit terrorists as a result of weak accounting of funds, the taxing or stealing of relief, and the potential infiltration of organisations to influence aid distribution.

“What humanitarian organisations continue to resist is any formal requirement to screen or vet individual beneficiaries of their aid programmes.”

But Joel Charny, US executive director of the Norwegian Refugee Council, argues that humanitarian agencies already abide by an existing raft of counter-terror regulations set by donor governments to avoid diversion and leakage – and assume all the legal risks should they be contravened.

“The core of the humanitarian approach is to distinguish the innocent from the men with guns,” Charny wrote. “What humanitarian organisations continue to resist is any formal requirement to screen or vet individual beneficiaries of their aid programmes.”

Squeezed on both sides

The Nigerian military adds another element of control. It is fully aware of the notion of humanitarian principle, aid workers say, but like many other countries fighting insurgent conflicts, it restricts humanitarian access to the civilian population in the northeast.

Relief organisations operate only in areas dominated by the army, which are fast shrinking as it withdraws from the countryside and into so-called “super camps” – leaving an estimated 800,000 people off limits to aid workers.

The military has also directly targeted humanitarian organisations. In September, it forced the closure of the regional offices of Action Against Hunger (AAH) and Mercy Corps, accusing the NGOs of aiding Boko Haram and ISWAP – an accusation they both vehemently denied.

A week after the army closed the AAH office, a staff member – one of six health workers abducted by ISWAP in a July ambush – was executed by the group. Ten aid workers have been killed by the jihadists in the past 18 months, and six more are still missing.

That hasn’t stopped a social media campaign that portrays NGOs as fifth columnists. The latest example was a false claim that the identity card of a French aid agency was found on the body of a dead ISWAP commander.

The Nigerian government lifted the ban on AAH and Mercy Corps at the end of October.

Aid workers told TNH that humanitarian principle is an aspiration rather than the reality in Nigeria.

“We are unable to work on the other side [of the front line],” one explained, speaking on condition of anonymity due to the sensitivity of the topic. “We have no security guarantees [from Boko Haram or ISWAP to reach civilians in their zones of control] and the army wouldn’t allow us anyway.”

“International organisations are being squeezed on both sides, by the government and armed groups.”

Actively screening would-be beneficiaries – and the potential intelligence role that could be construed as supporting – adds a new level of danger for aid workers.

“International organisations are being squeezed on both sides, by the government and armed groups,” said Kurtzer. “A perception that you’re working on one side or the other has real risks and security implications.”

Some aid workers told TNH they believe agencies in Nigeria that have accepted the USAID clause may regard it as little more than a box-ticking exercise, unlikely to be enforced in the field – or they just “hold their nose and sign”.

But the legal implications can also be daunting. Oxfam, for example, is facing a $160 million counter-terror lawsuit in a New York court.

Both Kurtzer and Charney argue that there needs to be an honest conversation between donor governments and humanitarians on a more realistic approach to risk in complex environments like Nigeria.

“Donors want to have it both ways,” said Kurtzer. “They want humanitarian operations to continue, but they want to protect themselves so as not to be seen to be violating the law.”

He called for courage from Western politicians to accept that a “certain amount of diversion is inevitable in complicated operational environments”.

Charny admitted that aid agencies must take “greater care in assessing the landscape and the context for their work”, but said they would also “welcome the opportunity to explain” their risk mitigation procedures to donors. “It is well past time to defend our actions and the principles and approaches that underpin them.”