The long-dormant border crossings re-opened with such fanfare between Eritrea and Ethiopia last year as a symbol of warming relations are all now closed – but that isn’t stopping a steady flow of Eritrean refugees from fleeing across the heavily militarised frontier.

According to the UN’s refugee agency, UNHCR, around 300 people continue to cross each day, using remote paths to avoid arrest by Eritrean border guards. They are prima facie refugees, typically escaping compulsory national service, repression, and joblessness, or looking to reunite with family members who have already made the journey.

Finding it increasingly difficult to make ends meet in Ethiopia, many Eritrean refugees are choosing to move on, seeking better opportunities in Europe – or even further afield in the Americas – to support their families. 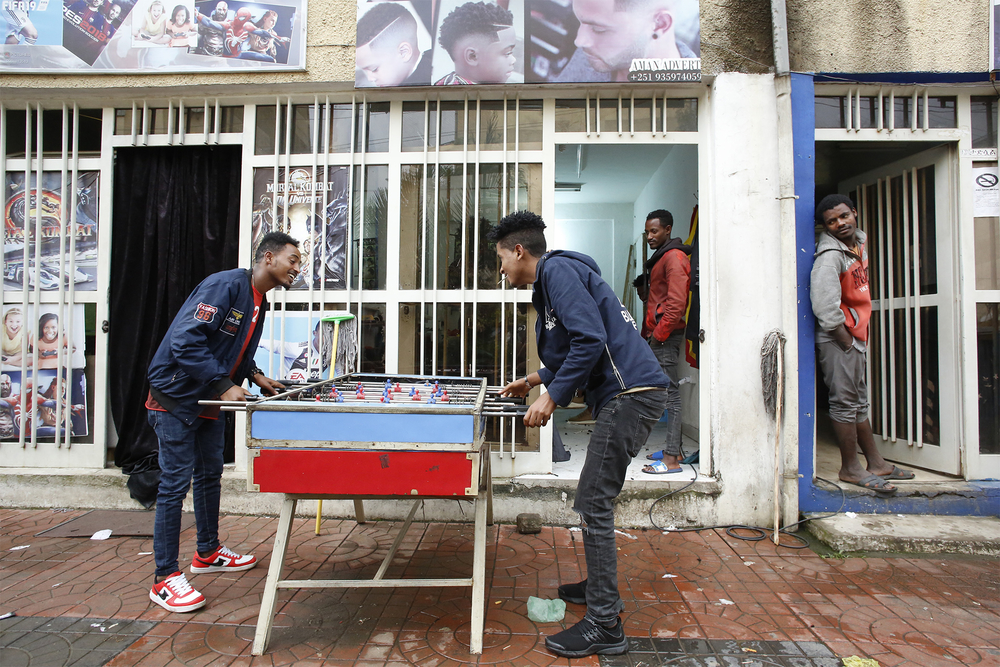 Sara Creta/TNH
Young Eritreans while away time in the Mebrat Hail suburb of Addis Ababa.

Eritrea gained independence from Ethiopia in 1993, but relations between the two governments soured, leading to a war from 1998 to 2000 in which 100,000 people died. Eritrea’s closed economy and the harshness of a regime that has remained on a war footing created a generation of exiles – some 460,000 people had fled the country by the end of 2016 out of a population of 5.3 million.

The peace agreement signed in July 2018 between Ethiopian Prime Minister Abiy Ahmed and Eritrean President Isaias Afwerki ended almost two decades of frozen conflict – and won Abiy a Nobel Peace Prize earlier this month. The accord was meant to usher in trade and development, and revive the historical ties between the two nations. But, as progress towards normalising relations has stalled, the four frontier posts thrown open under the agreement have shut, with the last one, Assab-Bure, closing in May.

“No proper explanation was given, but most probably the [Eritrean] regime fears the risk of losing control over the command economy and further acceleration of the mass exodus,'' said Nicole Hirt, a researcher on Eritrea with the German Institute of Global and Area Studies.

The Ethiopian government’s “open-camp” policy means refugees don’t have to stay in camps and can work or continue with their education.

But most Eritreans here have no proof of their academic qualifications. The Eritrean government doesn’t issue them to those who haven’t completed national service or can’t show evidence of an exemption.

That complicates the search for work, as Eritrean refugees have to compete in an economy that is struggling to deliver jobs to an already large pool of unemployed youth.

In the densely-populated Mebrat Hail suburb of Addis Ababa, many apartment buildings are home to Eritreans who arrived after the peace agreement was signed.

The influx of people looking for work and accommodation led to a jacking up of rents – adding to the struggle of new refugees trying to make a fresh start in Ethiopia.

“Rent is becoming very expensive in Addis Ababa and, even when you can find a job, you can barely pay the bills,'' said Abinet, a young Eritrean working as a taxi driver. 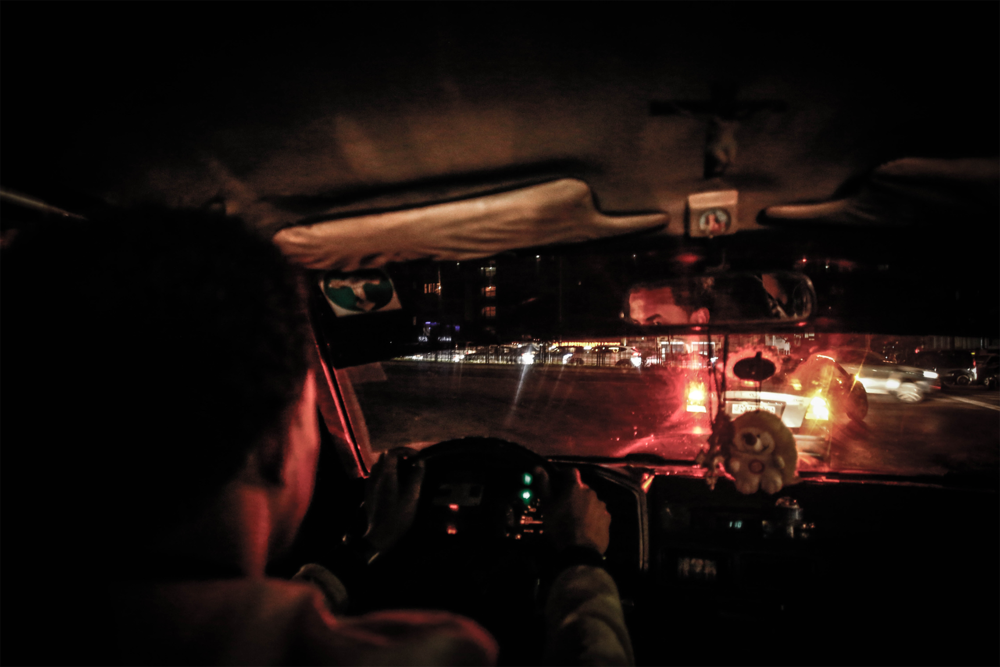 Faven, who was a laboratory technician in the Eritrean capital, Asmara, came to Addis Ababa to join her family. She is now working in a small shop earning $34 a month. “Not even enough to pay my rent,” she said.

Compulsory national service is the “primary driver behind the mass exodus of thousands of young Eritreans each month who brave dangerous foreign journeys and callous governments to reach safety abroad”, Human Rights Watch has noted.

Mickel, 22, fled the country after doing three years in the military – leaving him now marooned.

“I’m afraid to return. I will end up in jail, or worse [if I do],” he told The New Humanitarian. “I don’t have a passport and I cannot move freely.”

“I wake up in the night and I feel the government is coming to take me.”

"We are prisoners of our dreams in Sa’wa. We are not free. That's why I ran away,” said a 27-year-old former physics teacher, who taught at Sa’wa before escaping.

Filomon, a teenager, said he constantly worries he could be kidnapped in Addis Ababa by Eritrean secret police and taken back to Asmara – a fear heightened by the reopening of the Eritrean embassy in July last year.

“I wake up in the night and I feel the government is coming to take me. I still feel they can arrest me at anytime,” Filomon told TNH. “I don’t feel safe here.”

For many Eritreans, life in Ethiopia is a frustrating state of limbo.

Those who can, make plans to leave the country. For example, Robel, 27, is waiting for his application for a family reunification visa to the UK to be processed. In the meantime, his brother sends him money each month.

Others contemplate more difficult journeys, north to Sudan and then the Mediterranean route to Europe via Libya – although that is tempered by the well-known dangers.

“We are aware of the risk and we all know what’s happening there,'' a young Eritrean woman said in reference to Libya, where migrants can face detention, extortion, and torture at the hands of militia, even before attempting the perilous sea crossing to Europe.

It is difficult to gauge how many Eritreans are journeying on from Ethiopia, but according to UNHCR, it is a significant number, with many of them unaccompanied minors.

Apart from the well-trodden journey north to Sudan, new routes are emerging – or being re-explored.

For those who can afford it, Latin America is a growing destination – with the hope of then making it on from there to the United States or Canada – according to the UN’s migration agency, IOM.

“Nothing is impossible if you have money,” said Ghebre, who arrived in Addis a few months ago but is already dreaming of a better life abroad, and who preferred to only give one name.

Forged travel documents that can get you to Colombia, Ecuador, or Panama are available from smugglers in Uganda for $3,500 per person, TNH was told by several Eritreans in Addis Ababa. It is then a treacherous overland trek to Mexico.

Getting through Mexico, though, is a major hurdle. A report this month by the Mixed Migration Centre noted that some 4,779 Africans were apprehended in Mexico from January through July of 2019 – almost a fourfold increase over the same period the previous year. Among those were Eritreans, according to IOM.

Between 1,500 and 3,000 Africans are currently stranded in the southern city of Tapachula – although the Mexican authorities say they are on pace to triple the number of African migrants being processed this year, up from 2,100 in 2017.

An unknown number of migrants are also camped on Mexico’s northern border – stalled by the tough new US immigration policies. In a one week period earlier this year, the US Border patrol at Del Rio stopped more than 500 African migrants – some with children – who had taken the risk to cross undocumented.

Even if Eritreans do make it to the United States, there has been an “alarming uptick” in deportations by the US Immigration and Customs Enforcement agency, known as ICE, which specifically targets them, according to news reports.

The US Department of Homeland Security has also imposed visa restrictions on Eritreans, in direct retaliation for Asmara’s perceived non-cooperation over the deportation of its citizens – a move that in reality punishes the migrants rather than the government.

(TOP PHOTO: Eritrean refugees are still arriving in Ethiopia, despite the closure of the border.)