Nestling near the summit of Sinjar Mountain in northwestern Iraq, hundreds of blue and white tents line several kilometres of battered road snaking through a windswept valley.

This is where, in 2014, some 50,000 members of the Yazidi religious minority fled a massacre by so-called Islamic State. Trapped on the mountain with no food or water, their plight grabbed international headlines.

Four years later, more than 2,000 families, some 10,000 people, still live on the mountain in a camp with scant facilities. Unable to return to their flattened homes or too terrified of further persecution to leave – or both – they feel increasingly forgotten.

Since liberation in late 2015, up to 25,000 Yazidi families have returned to towns and villages once ruled by IS, according to Sinjar’s mayor, Ferhad Hiamd. But that’s not an option for many mountain camp residents who hail from places like Sinjar’s old town – largely reduced to rubble by IS demolitions, street battles, and airstrikes.

One of those who can’t go back is Mahmoud Khalif Bayan, who sits on the floor of his sparsely furnished tent, demoralised by the fact he can only get a day or two of casual labour a month and is unable to provide for his family.

“My home is completely destroyed and, as no one has yet returned to our village and there are no services, it remains impossible for us to return,” he says. “If we had anywhere else to go, we would leave, because this is no way to live.”

For the Yazidis, Sinjar Mountain is sacred. It has provided refuge in past wars. But their difficult life here is under renewed threat. In late March Turkey announced an impending military offensive in Sinjar, claiming that members of the Kurdistan Workers Party (PKK), which it considers a terrorist group, are still sheltering there.

While this looming military threat has made the situation in the camp even more precarious, grinding poverty and a near-total lack of job opportunities on the remote mountain mean any assistance is quickly used up, and needs remain acute.

Residents say what they really need is help that will last over the long term and enable them to rebuild their lives.

‘We live by God’s mercy’

Bayan’s youngest child, three year-old Chuer, was born in the camp. Her brother Benge, who was just six months old when the family fled, can remember no other home. They live four people to a small tent.

“It’s terrible here because we have no services, no electricity, no proper school, and no healthcare if the children get sick,” Bayan’s wife Shereen explains. The nearest clinic is a half-hour drive, but few residents have cars or can afford transport.

In a nearby tent, Hetty Hero, who looks a decade older than her 40 years, explains how every aspect of life at the camp, located 1,463 metres above sea level and often subject to extremes of weather, is difficult.

“Winter is terrible because rainwater leaks into the tents and it’s very, very cold, and, in the summer, the tents are unbearably hot because we have no fan and no electricity to run one.

“We sleep outside in the summer because it’s cooler, but the snakes and scorpions here are a big risk for the children,” she says. “We have very little food, no doctor, no money, and no work opportunities, and, really, we live by God’s mercy.”

Aid has arrived intermittently since the liberation of Sinjar in late 2015, Shereen says, including occasional donations of clothes and food boxes and, once, 500,000 Iraqi dinars ($420) for every family.

Out of the spotlight

Although the Yazidis continue to attract some media attention, particularly stories of young women forced into sexual slavery, officials from several international NGOs, none of whom agreed to be mentioned by name, noted that donations had dropped off since Iraq declared victory over IS in December 2017. The officials say they are struggling to raise funds for projects in Sinjar.

Small solar panels donated by one NGO back in 2014 have long since ceased to work. Every few nights, government power reaches the handful of brick dwellings for around two hours. Those from nearby tents top up their mobile phones in half-hour charging stints. Another NGO had provided generators and fuel to run the pumps for water-wells, but it withdrew from Sinjar a year ago and the pumps now stand mostly useless.

Sinjar resident Marwan al-Sheikh helps with logistics at the camp, which is run by a local Yazidi brigade of the People’s Protection Forces, or YPG, which worked directly with the PKK from 2014 until 2017, sharing control of the mountain until Iraqi forces took over the area late last year, according to local YPG commander Said Hassan.

Iraq has since incorporated the YPG into its Hashd al-Shaabi (Popular Mobilisation Forces), a collection of mostly Shia fighting forces allied with the Iraqi army during the battles against IS and now officially under state control. 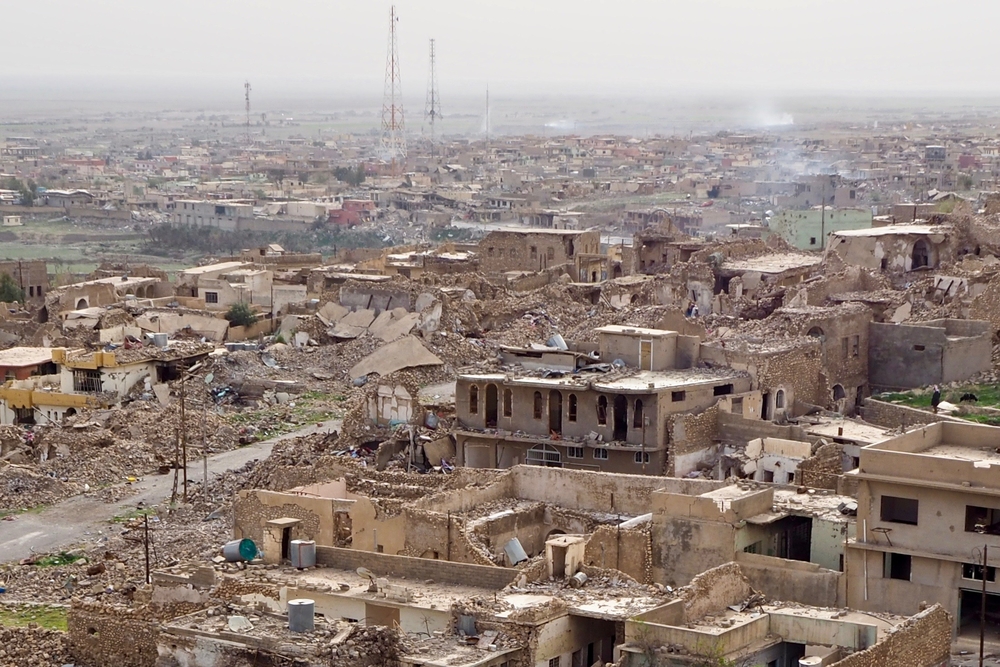 Al-Sheikh says camp organisers collect money from the families to buy fuel for generators from Sinjar town, but many residents don’t have the 4,000-dinar ($3.30) fee.

UNICEF spokeswoman Laila Ali says the UN has provided assistance to residents of the mountain camp since 2015 via a local partner, most recently supplying kerosene heaters and warm clothing.

It is unclear what aid, if any, other aid groups are providing – several, including the World Health Organisation, failed to respond to IRIN’s request for comment.

Whatever aid does arrive offers only fleeting respite. And the camp continues to grow despite the tough living conditions and few basic resources available to residents. Some Sinjar residents who returned to the region from other parts of Iraq to find their homes destroyed or villages deserted have come back up the mountain.

Hassan, a Yazidi, says the mountain has always been seen as a safe haven, even during IS occupation of the region, and that the camp now houses 2,100 families, more than double what it did when most of the Yazidis first fled Sinjar in 2014.

“At first we just had tarpaulins, but organisations in [the Syrian Kurdish area of] Rojava, and the Iraqi government, later sent tents,” he says. “We welcome any Yazidis here, giving them a tent so they can set up a life.”

Since Turkey’s threat to intervene in Sinjar, the Iraqi government has sent forces to the area and the PKK announced its complete withdrawal.

In his makeshift general store in a roadside shack, camp resident Khalid Khodaida explains how people on the mountain are now terrified and can’t sleep at night because they fear airstrikes.

“Even though they have no money and almost nothing, some people have already fled,” he says. “The Yazidi people have suffered enough and all we want for our future is peace and safety.”

A spokesman for one of the main international providers of humanitarian aid in Iraq, speaking on condition of anonymity, voiced major concerns about access to the camp and secondary displacement if Turkey follows through on threats to launch military operations in the region.

IS repeatedly tried to conquer the mountain until it lost control of Sinjar town in late 2015. It was kept at bay by the mountain’s height and by military positions manned by the YPG, all-female Yazidi units, and the PKK.

Despite the hardships, Hassan, the YPG commander, is quietly optimistic and glad the camp has at least allowed them to stay in their homeland and preserve their threatened culture: “This camp has enabled us to maintain our Yazidi demographic here, and many people stay because it’s near their former homes, so [that] when Sinjar is eventually rebuilt it will be easier for them to return.”

(TOP PHOTO: Women in the mountain camp say life is tough all year round. Tom Westcott/IRIN)