Gocha Zukhbaia was raised in a spacious, two-storey village house where he dreamed of becoming a fisherman off the palm-fringed Black Sea coast.

That home and his future were razed by Georgia’s civil war in the aftermath of the disintegration of the Soviet Union.

Zukhbaia fled to Tbilisi, the Georgian capital, and today he labours on construction sites where he said accidents have killed two fellow workers.

His daughters, aged 19 and 20, have lived their lives in exile, crammed with their parents into two rooms in a former children’s hospital. The dangerously crumbling building houses 125 families who fled the fighting a quarter century ago.

They are among 224,000 ethnic Georgians unable to return to their homes – victims of a high-stakes political and military standoff that pits the Georgian government against Abkhazia, which considers itself independent, and its backer, Russia.

Many homes left behind in Abkhazia’s de facto capital, Sukhumi, have been occupied by ethnic Abkhaz families, while Abkhazia’s ethnic-Georgian district of Gali is littered with abandoned and destroyed houses amid groves of hazelnut and tangerine trees.

About 224,000 people have been unable to return to the homes they fled in the breakaway region of Abkhazia, which fought a war of secession from Georgia in 1992 and 1993. The government moved 125 families into this abandoned paediatrics hospital in Georgia's capital, Tbilisi, where they remain a quarter century later. The crumbling building has been declared too dangerous to live in, and the families are awaiting housing promised by the government. 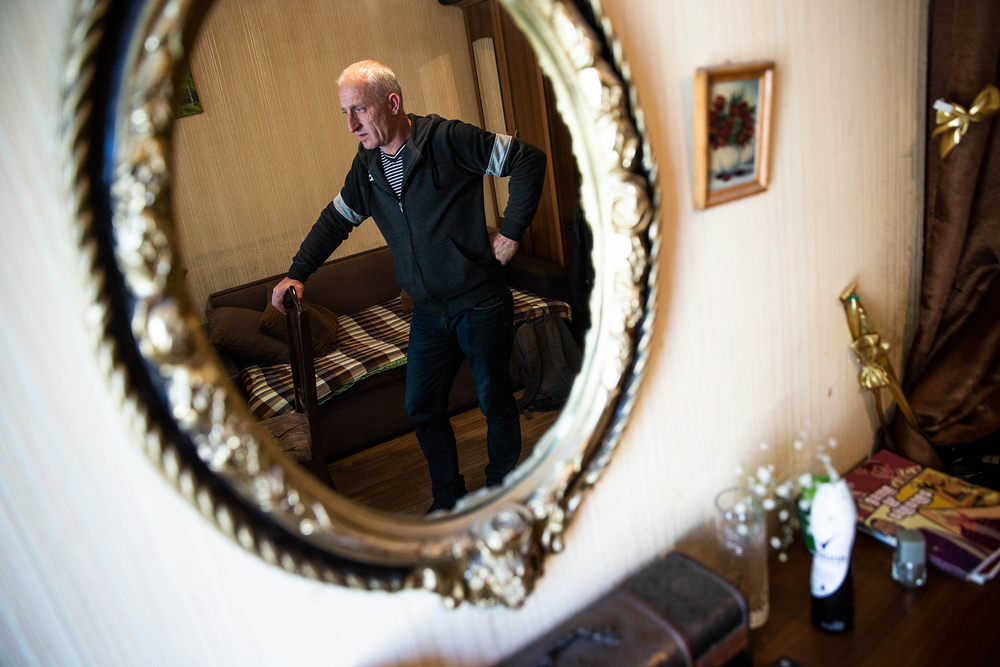 Gocha Zukhbaia in his apartment in the abandoned paediatric hospital. Gocha was 19 when his family was forced to leave Abkhazia. He now lives with his wife and two daughters in two small rooms. 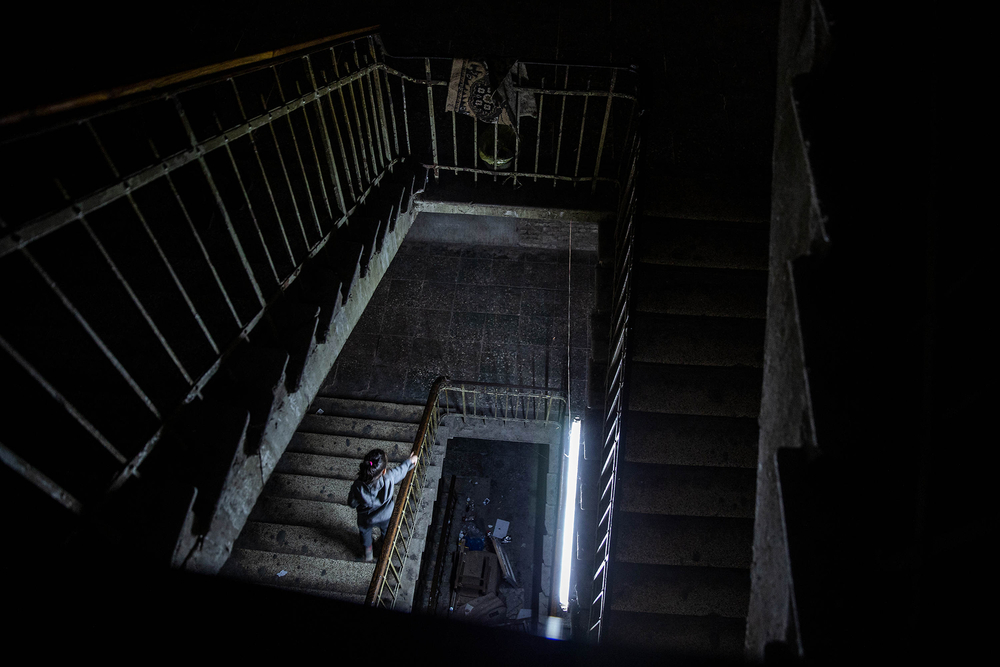 A girl walks down an unlit stairwell at the abandoned hospital. The building has foundation issues and residents have hired an expert who has concluded that the building is too dangerous for habitation. 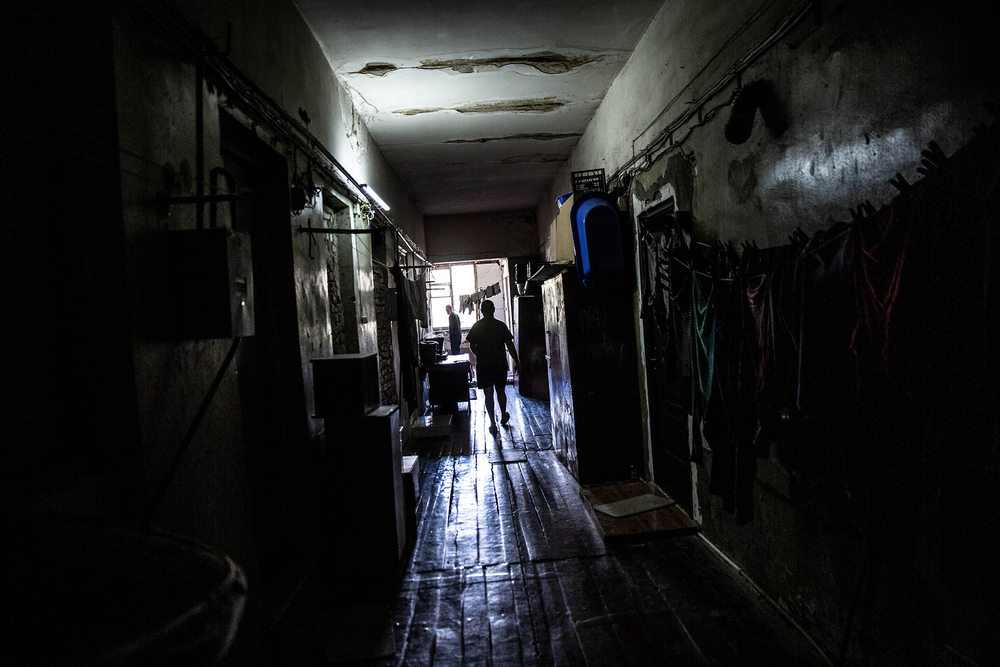 Imeda Gamtemadze walks down a hallway towards his family's room. On this floor, 11 families share one bathroom. 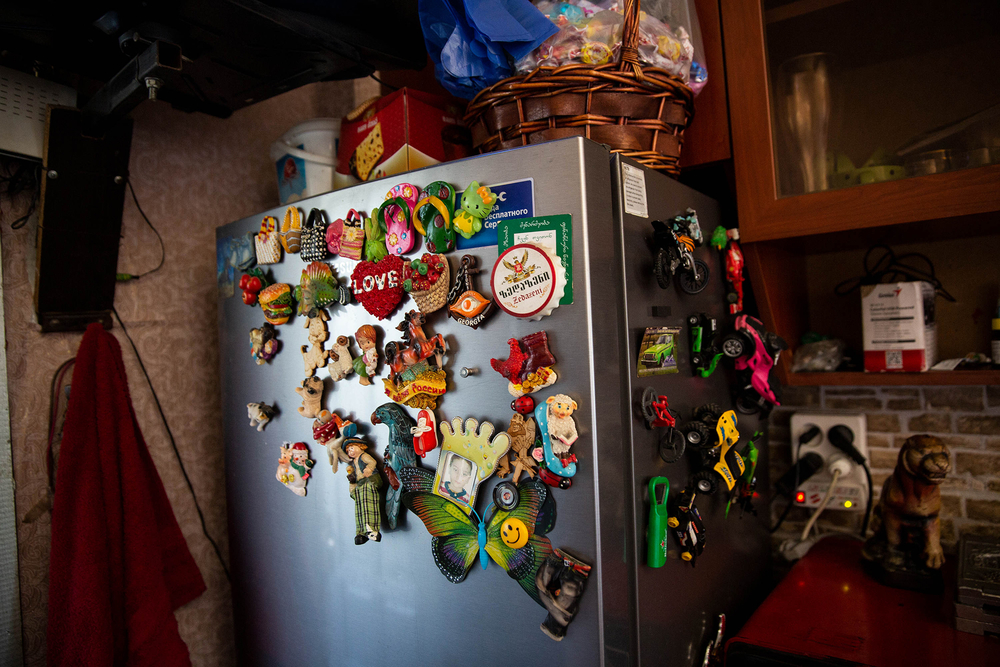 Magnets adorn a refrigerator in the small room that Shorena and Imeda Gamtemadze share with their two children. 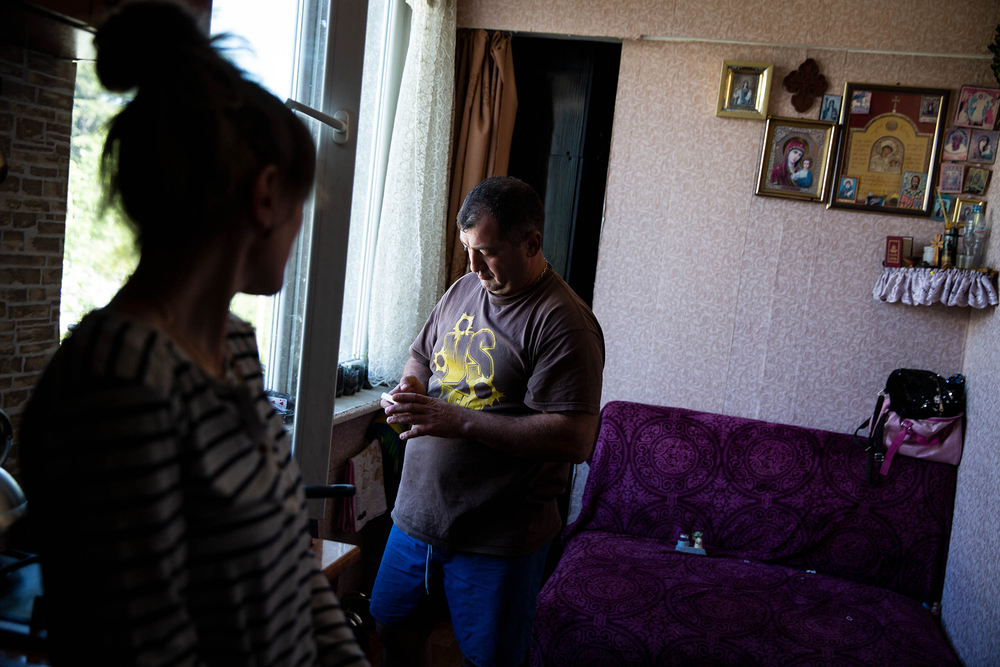 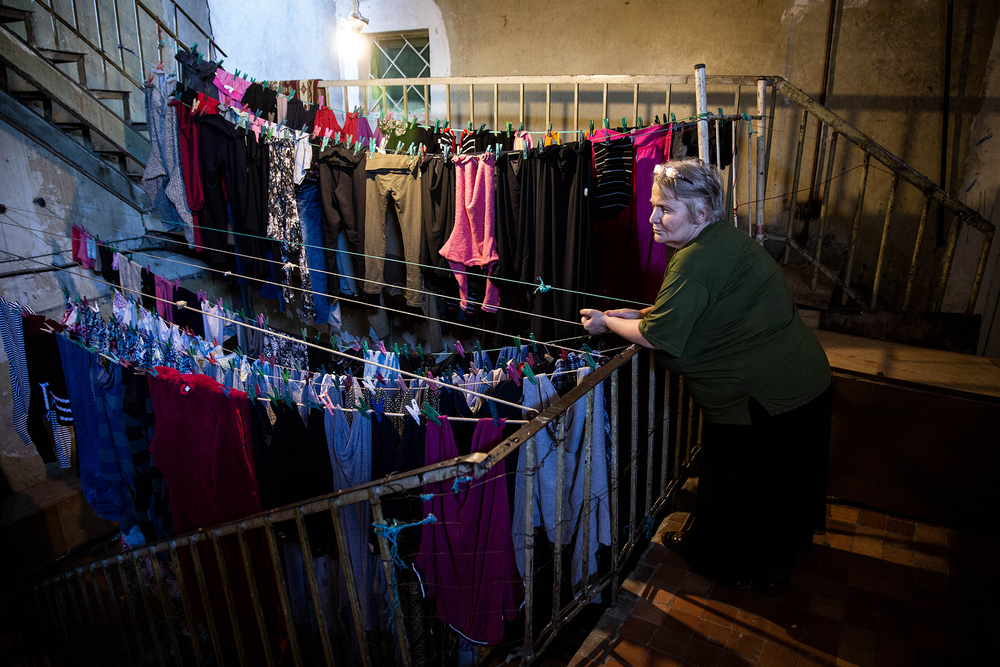 Gunas Abakelia stands at a bannister where clothes hang to dry. Gunas used to live in a larger room, but sold her space and moved into a smaller one to afford chemotherapy treatments for her cancer. 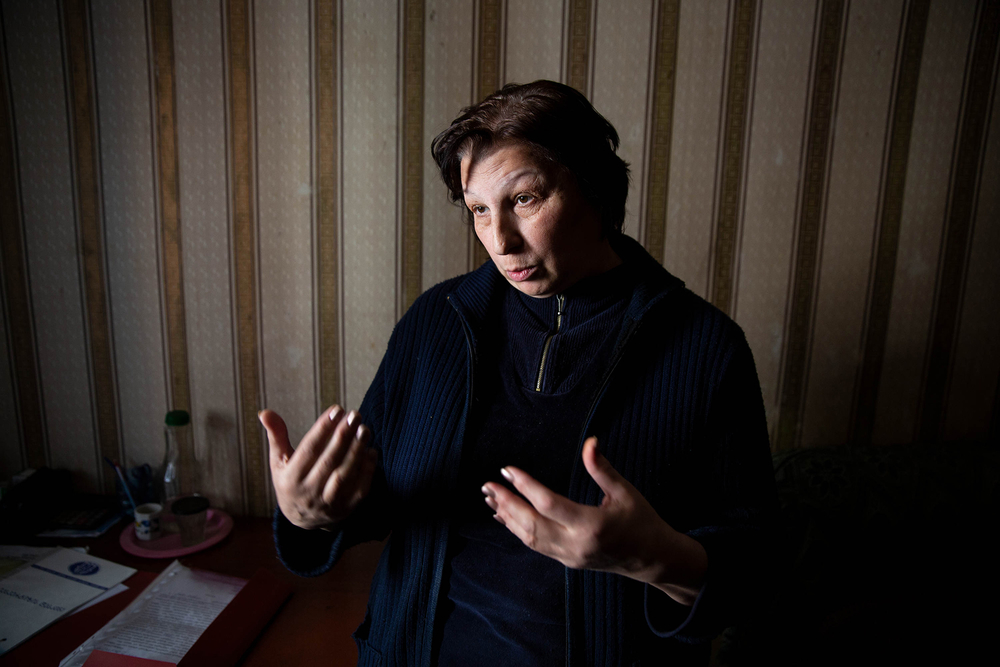 Irina Bebia sits in her room. Irina is leading the fight to relocate families to a safer environment. 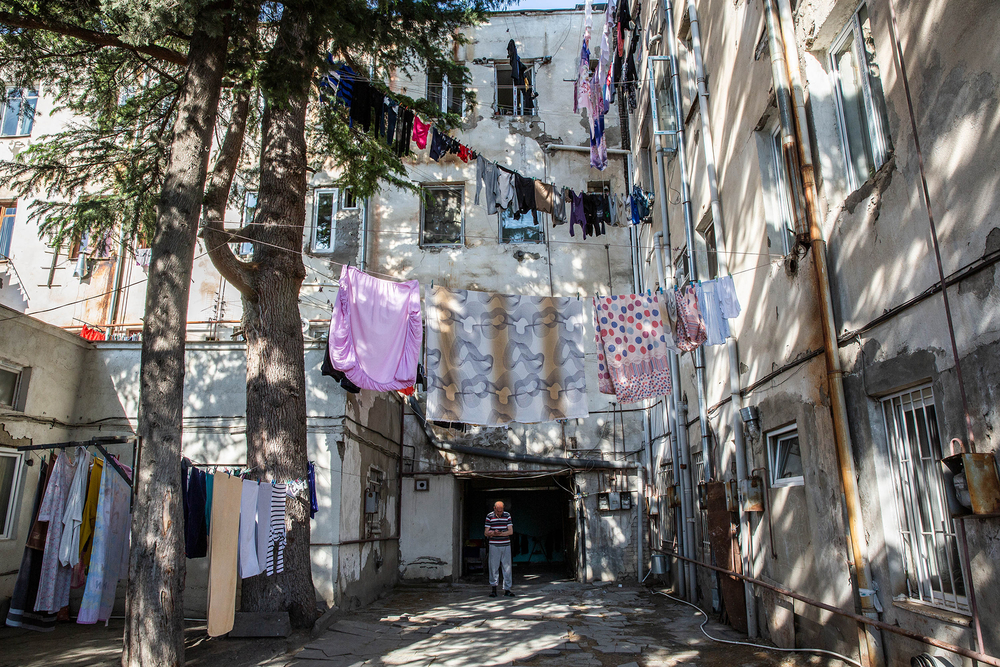 Even the dead can’t go home

Russia maintains half a dozen military bases in Gali district – multi-storey buildings surrounded by walls topped with razor wire and video cameras. Along with Abkhaz security officers, Russian soldiers control what is diplomatically called the “administrative boundary line” – a line most inside Georgia proper are not allowed to cross.

That prohibition extends to the deceased.

Before Zukhbaia’s brother died of cancer this year, he said he wanted to be buried in his home village in Abkhazia. Zukhbaia said he tried to negotiate with Abkhaz border officials who demanded 50,000 roubles ($772) to allow his brother’s body across. He could not afford the bribe.

“I don’t have any hope, there’s no chance. But I think about it every day.”

As for returning to the village he left at 19, Zukhbaia said: “I don’t have any hope, there’s no chance. But I think about it every day.”

On the breakup of the Soviet Union, Georgia seized the opportunity to regain its independence in 1991. But it fought secessionists in western Abkhazia – strategically located on the Black Sea – and northeastern South Ossetia. When war erupted in 1992, Russia sent troops to fight alongside the separatists.

Several thousand people died in the 13-month conflict, which Human Rights Watch said was characterised by killings, torture, and forced displacement of civilians of all ethnicities.

In September, Abkhazia celebrates the 20th anniversary of its declaration of independence, though it is recognised by only Russia, Syria, Venezuela, Nicaragua, and Nauru. That means it only really trades with Russia.

No progress has been made during a decade of UN-backed talks in Geneva.

Returnees are foreigners in their homeland

Georgian officials want to deal directly with Russia and avoid speaking to Abkhaz negotiators because, analysts say, they fear conferring legitimacy on the breakaway region.

Abkhaz officials argue that Georgia unfairly uses its membership of the UN and the Organization for Security and Co-operation in Europe to promote its position. The organisations need “to let us voice our position… so that they will have the chance to hear the position from both sides”, said Abkhazia’s deputy foreign minister, Irakliy Tuzhba.

“And we are not willing to discuss the problem of refugees until the situation is changed,” he told TNH in an interview.

In the first post-war years, Abkhazia did repatriate about 40,000 ethnic Georgians to Gali district, according to the UN’s refugee agency, UNHCR – a move Tuzhba said showed his government’s willingness to resolve the problem.

The returnees, however, find themselves disenfranchised – foreigners in their homeland.

“The problem is that we don’t have any official relations with Georgia, no regulations on dual citizenship or anything like that,” Tuzhba said. “In fact, we are in a state of undeclared war.”

He said returnees are allowed to get Abkhaz passports if they drop their Georgian citizenship.

Some 600 people from ethnically mixed families have applied to switch to Abkhazia citizenship, but every case must be personally approved by the prime minister, according to Vincent Dontot, regional director for the Danish Refugee Council.

“If you have a Georgian name, you will never get it,” Dontot said.

Exchanging citizenship would prevent ethnic Georgians from crossing the boundary to visit family and access medical and other services.

Last year, Abkhazia began issuing residence permits that provide ethnic Georgians with identification but do not allow them to vote or hold political office.

This allows people to retain Georgian citizenship and still “let them live well and develop in the territory of Abkhazia”, said Tuzhba.

Georgia’s foreign ministry said it forces ethnic Georgians who have lived there for generations “to register as foreigners”.

The move also helps to ensure that power remains in the hands of ethnic Abkhaz. They were only 17 percent of about half a million people, according to a Soviet census in 1989 when ethnic Georgians comprised almost 50 percent of the population. Today, Abkhaz are the majority among about 250,000 people.

Ethnic Georgians have limited opportunities for education in their own language and restrictions on owning property, according to a 2015 study by the Danish Refugee Council, a humanitarian aid group.

Abkhazia’s constitution states that land and resources “shall be used and protected as a basis for life and activity of the citizens”.

That could be interpreted to revoke property rights established by some ethnic Georgians who have managed to establish ownership despite lacking Abkhazia citizenship, the Danish aid group warned.

Many who fled to Georgia are not faring much better.

The Georgian government has a programme to improve housing, but a 2016 analysis by the Danish Refugee Council indicated that “fraud is widespread” and noted: “The most vulnerable are not necessarily served first.”

The families at the abandoned hospital in Tbilisi, tired of waiting for decent housing, pooled their money a couple of years ago and hired an expert who found their building extremely unsafe and beyond repair – a conclusion residents said was obvious from collapsing ceilings, tilted floors, and walls pulling apart at the joints.

The government has promised to build new apartments.

Irina Bebia led the community fight for better housing after rain dripping through the ceiling woke her up one winter morning.

“I lost my brother during the war. He was 28 years old,” she said. “And after all that happened, they put me here and I have rain falling on my head?”

Bebia is determined to make the government honour its promise. “I won’t give up,” she said.

“We thought life would be better when we returned, now we are thinking of leaving.”

But while many ethnic Georgian exiles want to return to their homeland, the poor economic and social prospects in Abkhazia are causing some returnees to reconsider.

One elderly woman crosses the boundary line regularly to collect her pension and visit her son, daughter-in-law, and grandchild. But they are not allowed to visit her in Gali, she said. She did not want her name published for fear of repercussions.

“We thought life would be better when we returned,” said the woman, standing between the burnt-out remains of her former home and the smaller house she now shares with her son.

“Now we are thinking of leaving.”