On 23 May 2017, militants aligned with so-called Islamic State stormed Marawi, sending streams of civilians rushing out as the Philippine military encircled the city. Five months of fierce clashes uprooted 350,000 civilians and killed more than 1,000 people – mostly militants, the government says.

Two years on, the heart of the city remains buried in rubble. Despite government promises to accelerate rebuilding, more than 100,000 residents of the worst-hit areas are still displaced and desperate to earn a living. But help has grown increasingly sporadic and government and NGO programmes meant to encourage small businesses have fallen short.

Marawi’s stalled rebuild comes during a crucial period for the wider Mindanao region. Many communities on the southern island group have endured a decades-long insurgency by armed groups from the country’s Muslim minority.

Earlier this year, Muslim parts of Mindanao voted in favour of a peace deal that gives greater political and fiscal powers to a newly named Bangsamoro autonomous region, which includes Marawi. But smaller Islamist rebel groups continue to clash with the government, including remnants of the forces that seized Marawi. Mindanao is still under martial law, which President Rodrigo Duterte put in place immediately after the siege.

Reconstruction authorities say at least 2.7 million tonnes of debris – along with dozens of unexploded bombs and other weapons dropped during the battles – must still be cleared before rebuilding can begin.

“It crushes my heart that we cannot provide for the needs of our children.”

Aisha Calalagan and her family lost everything during the clashes. “Our house was hit by a bomb. There was a crater on it. Nothing was left,” she said.

The majority of Marawi’s displaced are staying with extended family, but Calalagan is among at least 13,000 people languishing in transit shelters or squalid evacuation tent cities set up as a stopgap when the fighting began.

Calalagan has found it nearly impossible to support her family. She received a sewing machine from a government livelihoods programme, but most of her potential customers are people like her: displaced and penniless.

She pointed to a rusting bicycle sitting in the corner of her tent: it was given to her six-year-old daughter as a gift, but she can’t find the 500 pesos, or $10, it would cost to replace a missing front tyre.

“It crushes my heart that we cannot provide for the needs of our children,” she said. 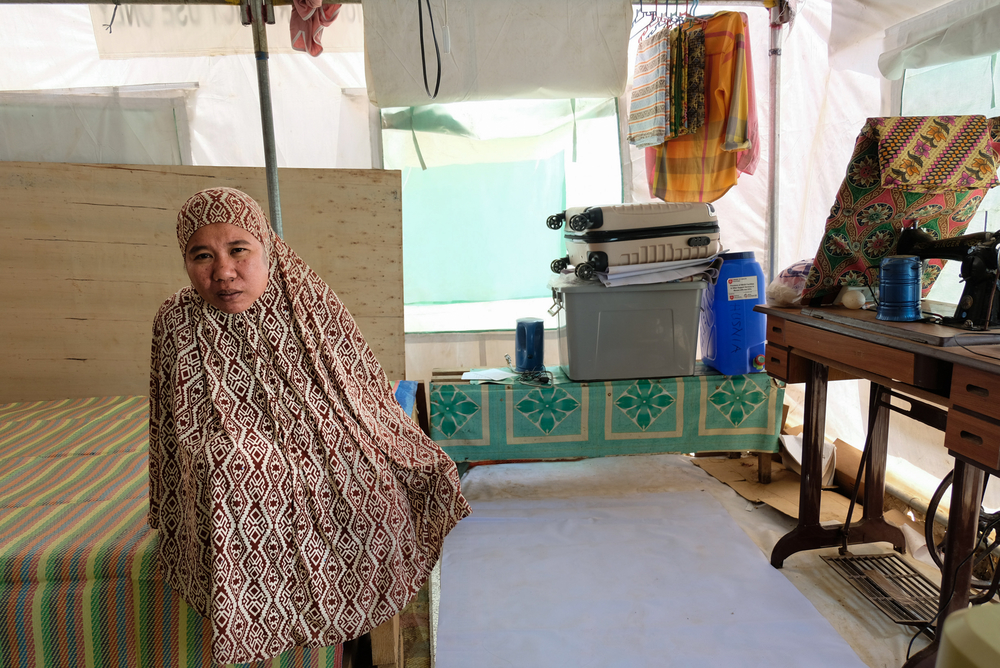 Bong S. Sarmiento/TNH
Aisha Calalagan waits inside her family’s tent at the Sarimanok evacuation site in Marawi. The government gave her a sewing machine to help her earn money, but most of her customers are other displaced families.

Marawi’s displaced families say help has lagged as the government’s priorities have shifted from emergency response to recovery and rehabilitation. And humanitarian agencies working in Marawi have also struggled with funding, two years after the siege erupted. A $61 million UN-led appeal for Marawi last year was only one-quarter funded.

Families living in the evacuation centres received starter kits to help them earn a living: sewing machines like the one Calalagan was given, cooking utensils, food carts, or supplies to open small stores. Others took part in cash-for-work programmes meant to employ displaced people in the humanitarian response.

Datu Abdul Gani, who heads a family with four children staying in an evacuation camp, says the last livelihoods help he received was months ago under a government cash-for-work scheme. He earned the equivalent of about $38.

"I worked for three days for the canal system in our evacuation centre, but nothing more followed," he said.

This year, humanitarian groups are asking for more than $43 million to help 300,000 people, including education programmes for children at risk and cash grants for the tens of thousands still displaced.

“The people displaced by the Marawi siege really need support, especially livelihoods, while in transition to normal lives,” Taulani said.

But advocates for the displaced say that transition can’t begin as long as Marawi’s central core – the cultural and economic hub for the surrounding area – sits in ruins. 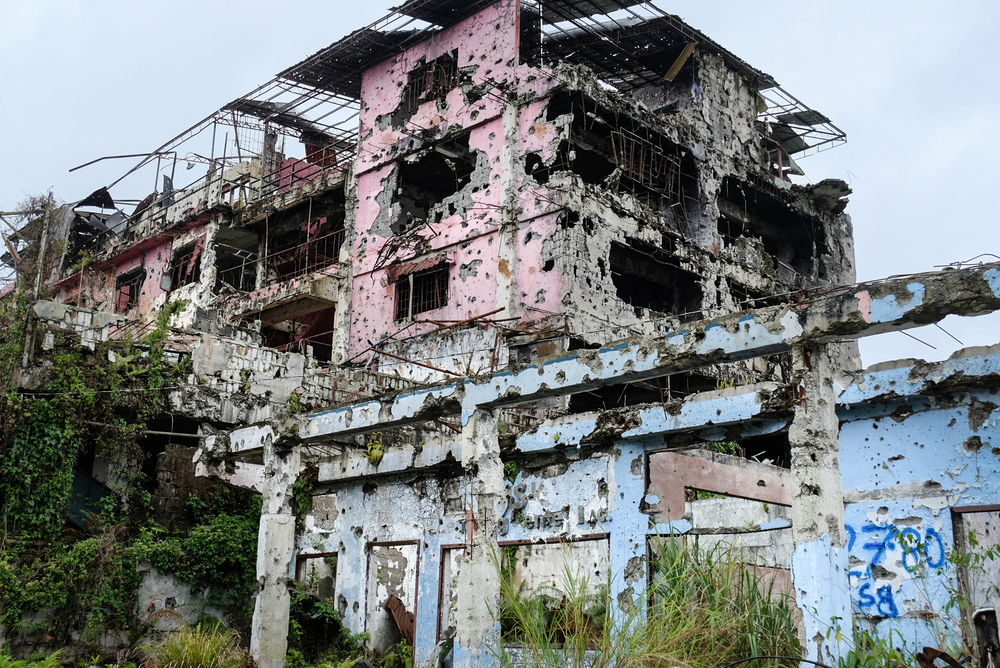 Bong S. Sarmiento/TNH
A building destroyed during the five-month siege of Marawi.

Displaced residents call it “ground zero”. Bombs unleashed by military airstrikes destroyed large parts of the central area beyond repair. Buildings left standing are pockmarked with bullet and mortar shell damage – a reminder of the five months of urban warfare. Debris is scattered through much of the 250-hectare site; grass and plants have grown over areas where families once lived.

"Going back and living again at ground zero means they can start rebuilding their shattered lives," said Hamidullah Atar, the sultan of Marawi, a traditional leader in the area who was also displaced during the siege.

The government body tasked with rebuilding the city, dubbed Task Force Bangon Marawi, has promised to complete reconstruction by December 2021.

In a recent press briefing amid the rubble, the organisation’s chairman, Eduardo del Rosario, said delays in clearing the debris – and in recovering dozens of unexploded weapons – have hobbled the city’s rebuild.

Reconstruction must go “slowly but surely”, he said, “to ensure the safety of residents”.

Del Rosario said search teams would clear the unexploded bombs by the end of August, while demolitions and debris removal will be complete by the end of November.

For now, displaced families from Marawi’s “ground zero” say they need more help. The government has promised to build new permanent homes for some of the displaced; so far nothing has been completed, though some construction is underway.

Families living in the evacuation centres complain of problems with water and toilets as well as food shortages, which are exacerbated by a lack of income.

Omar Sarip, the imam at the evacuation centre, said families have spent a third straight Ramadan waiting for their lives to improve.

Recently, the government gave his family a cash grant worth nearly $1,400. He spent part of it on a motorbike, which his son now uses as a taxi to help the family earn. But it’s not enough.

“After the siege and until now,” he said, “we barely made any money.”