On 23 May 2017, militants aligned with the so-called Islamic State barricaded themselves into Marawi City on the Philippine island of Mindanao, beginning a five-month siege. A year on, the city still lies in ruins, some 237,000 people remain displaced, and frustration is growing at the slow pace of the rebuild.

This month, Nasser Lucman and his daughter, Rainisah – along with many other families – were allowed to return to their homes for the first time. The visits were tightly controlled by the army. Those returning were only permitted to recover what belongings they could from the wreckage before leaving again.

Lucman pulls at a sheet of mangled, corrugated metal that was once his front door, tearing it off and tossing it aside. “See, bullet shells,” he exclaims, pointing his flashlight over a pile of casings that confirms what he already knows: his home has been a war zone. 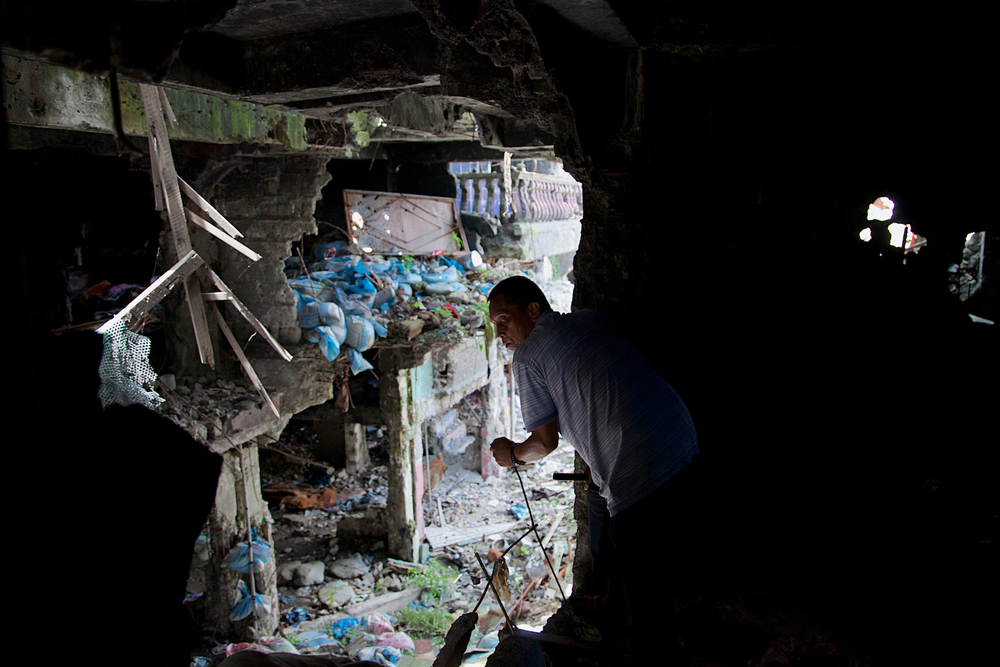 Wes Bruer/IRIN
Nasser Lucman peers through a gaping hole in the wall in his former home in Marawi.

As the army bombarded Marawi with airstrikes to root out the militants, more than 353,000 people were driven out of the city and surrounding areas. More than 1,000 people were killed. The government says only a few dozen civilians were among the dead. Local NGOs say many more civilians are missing and unaccounted for.

The government declared an end to the siege in late October and this month reconfirmed its commitment to rebuilding the city. But reconstruction has stalled, with large sections of Marawi covered in rubble and demolitions still not underway. While some of the displaced have returned to outlying parts of the city, authorities say people from the worst-hit central districts, like the Lucmans, won’t be able to return for at least 18 months.

Thousands still live in evacuation centres and depend on insufficient food and water supplies. Most are bunkered down with extended family outside the city, where they have no access to aid or jobs.

Local advocates accuse the government of not doing enough to get people back on their feet and earning a living.

And the threat of militancy and extremism still lingers in Mindanao. The Philippines is a mostly Catholic country, but parts of Mindanao are majority Muslim – including Marawi, which is officially known as the Islamic City of Marawi. Last year’s violence and today’s faltering rebuild have added new levels of mistrust to a decades-long anti-government movement.

No homes; no jobs

A few kilometres outside the city, Fatima Lumabao sits in a bare, white tent – one of dozens lined up in rows on a small plot of recently cleared farmland. She has lived here since February, when a nearby municipality evicted hundreds of Marawi evacuees from gymnasiums and government buildings.

Wes Bruer/IRIN
Fatima Lumabao is one of some 237,000 Marawi residents who are still displaced, a year after conflict uprooted her city’s entire population. With no job prospects in the makeshift tent city she now calls home, frustrations are rising as food aid dwindles.

Like the Lucman family, Fatima recently visited her former home in Marawi, only to find it completely destroyed. “We retrieved nothing,” she says.

Her family now depends on deliveries of government supplies – coffee, soap, a few kilograms of rice – that have grown increasingly sporadic as frustrations build.

“We are having a hard time getting our food,” she says. “Our water is very limited. We are grabbing at each other just to get our water.”

Adults and kids alike sit idly in the sweltering heat, waiting for new supplies. On this day, it comes in the form of a rare hot meal served in styrofoam boxes, thanks to a visit by local government and law enforcement officials.

But what Lumabao, a mother of eight, wants most is to earn a living and rebuild her life. The market where she previously sold fruit was levelled during the siege.

Samira Gutoc, a local rights activist also displaced during last year’s violence, says the last 12 months have been a struggle for survival. People in evacuation centres have become dependent on aid, she says, but what they really need are jobs.

“[Humanitarian] assistance may be a temporary band-aid, but respect and dignity is a long-term process and it needs to be given urgently,” says Gutoc, a member of the Ranao Rescue Team, a group of local organisations that helped Marawi residents who fled the city last year. “Especially for ground zero, the war zone people, they don’t feel dignified in this situation.”

Marawi is the capital and commercial heart of Lanao del Sur Province, but the siege also wiped out most of the businesses in the surrounding areas and devastated their local economies.

Laisa Masuhud Alamia, executive secretary for the Autonomous Region in Muslim Mindanao, says the regional government is trying its best to provide services, but agrees that conditions in evacuation centres “are not that good”.

The nationally led task force in charge of reconstruction says rebuilding Marawi’s worst-hit areas will take at least 18 more months – a questionable timeframe given that authorities are still finding undetonated explosives scattered throughout the city, as well as dead bodies among the ruins.

Alamia says it will likely be “quite some time” before residents “can actually go back and make sure they have access to all services of government, including livelihoods.”

A decades-long anti-government movement on Mindanao still casts a shadow over last year’s siege and the stalled rebuild here.

Over years of failed peace attempts, the insurgency on the island has split into a complex array of factions. Armed groups like the Moro Islamic Liberation Front are cautiously waiting for a long-delayed peace accord to become law. Other groups remain steadfastly opposed to the national government and have taken on extremist tones.

Though the government declared victory over the IS-aligned militants that seized Marawi last year, frequent skirmishes still trap civilians elsewhere on Mindanao – including a March shootout between the army and another IS-aligned group, which displaced more than 4,000 people less than 200 kilometres south of Marawi. 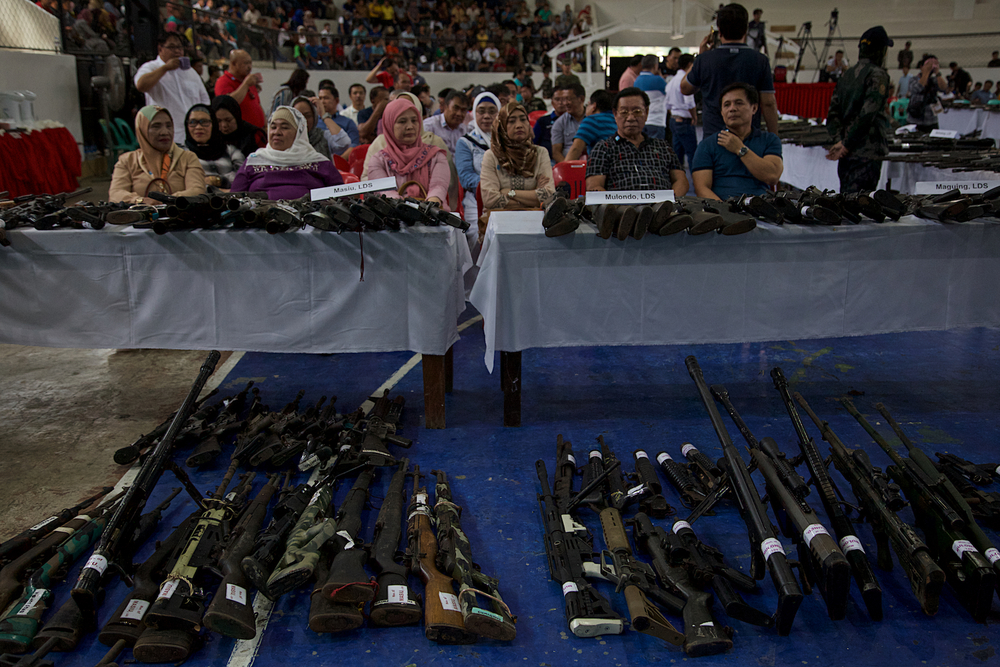 Wes Bruer/IRIN
Government authorities display weapons turned in by locals during a public ceremony in Marawi in May 2018. Marawi’s siege, and its slow rebuild, are happening in the middle of a decades-long government insurgency.

This month, as the anniversary of the Marawi siege approached, President Rodrigo Duterte visited the city, greeting dozens of displaced former residents with promises for a hopeful future.

“The government really wants peace,” Duterte declared, theatrically tossing aside a prepared speech. “We do not want the government to go here and kill.”

He pledged support for reconstruction. “We are rebuilding Marawi,” he said. “Slowly the money comes. Not overnight.” 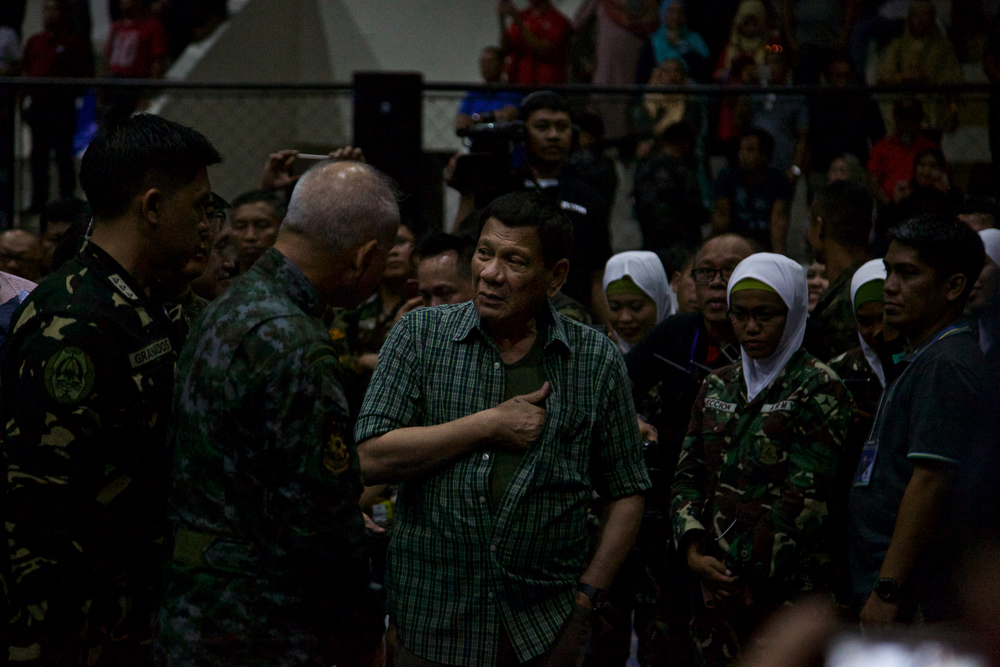 Fatima Lumabao, the mother of eight still living in a tent outside the city, was in the crowd.

She was not convinced. “I have not even received one peso from the government,” she says.

Duterte’s public optimism stands in stark contrast with Marawi’s bleak central core, where the crumbling buildings are riddled with bullet holes and many walls are still scrawled with pro-IS graffiti.

During their short visit, Nasser and Rainisah Lucman stumble through their home looking for anything to salvage. They find some clothing hangers, an old fishing net, and some plastic jugs.

Through a blasted wall of a downstairs bedroom, they also see their neighbour, Abdulhakim Salem. He stands with a blank stare, surveying the damage in the gaping shell of his own former home, as his family and neighbours gather around him. 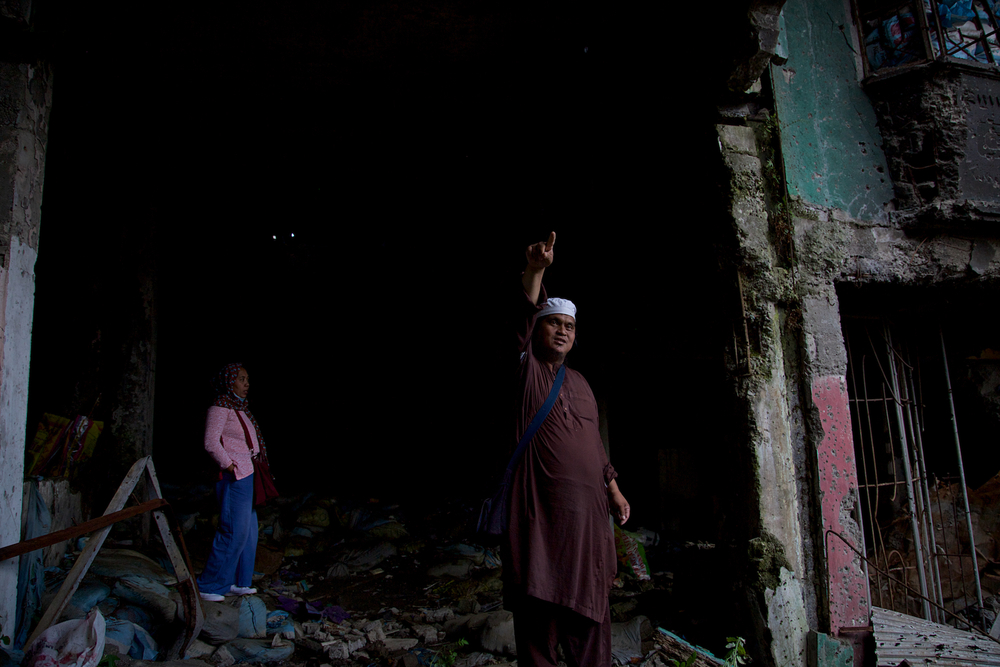 Wes Bruer/IRIN
Abdulhakim Salem surveys the damage in his former home in Marawi City, on the Philippine island of Mindanao. He returned to his home in May 2018, a year after militants stormed the city, to find only an empty shell.

A year after the siege, he says, he still can’t believe fellow Muslims would cause so much damage to other Muslims.

But, standing amid the destruction, he and his neighbours also wonder if the firepower used by the army was necessary to liberate the city.

“It was not the terrorists who had bombs and planes,” someone in the group says. Salem and the others nod their heads in agreement.

Down the street, workers in an ambulance collect the bones of one of last year’s casualties – the body has been rotting in the heat for months.

(TOP PHOTO: Much of Marawi’s central core lies in ruins, months after the Philippine army ended its siege of the city. Airstrikes and bombs reduced buildings to empty shells or piles of rubble. Families returning to see their former homes for the first time salvage little of value. CREDIT: Wes Bruer/IRIN)