Authorities in the Democratic Republic of Congo have approved several experimental drugs to treat people infected with Ebola as an outbreak in a conflict zone proves hard to stop, with probable cases rising above 100 and fatalities in the sixties.

On Friday, the World Health Organisation brought the challenge into sharp focus, announcing that a doctor had become the first case in a live conflict area – the North Kivu town of Oicha, which is almost entirely surrounded by fighters of the Allied Democratic Forces, a rebel group with links to Uganda. The doctor’s wife has also been confirmed as having Ebola.

"So, for the first time really, we have a confirmed case and contacts in an area of very high insecurity,” Peter Salama, WHO’s deputy director-general for emergency response, told a news briefing in Geneva. “It really was the problem we were anticipating, and the problem at the same time that we were dreading."

The briefing coincided with a statement of alarm from the UN’s refugee agency, UNCHR, about the latest escalation of violence in eastern North Kivu province. “The cumulative effect of conflict and the outbreak of the deadly disease is threatening millions of Congolese,” the statement said, noting that fighting had intensified in all six of the province’s territories.

The virus began to spread in the North Kivu village of Mangina at the end of July when a group of mourners, in keeping with local tradition, touched the body of the first victim and themselves became infected.

On Thursday, three weeks after declaring the outbreak, Congo’s health ministry reported 103 cases of haemorrhagic fever in the region, 76 confirmed as Ebola. Of the 63 fatalities, laboratory tests have confirmed 36 as Ebola, while 27 are considered “probable”.

The outbreak, Congo’s 10th since the virus was discovered near the country’s Ebola River in 1976, has provided drug manufacturers and researchers with a rare chance to test products that haven’t completed clinical trials, as long as they have government permission.

“What’s changed is that there’s an acceptance that research during an outbreak is something we need to do.”

Doctors began administering an experimental drug, mAb114, to 10 patients on 11 August. In a 21 August update, the Congolese health ministry said the patients were showing a “positive evolution”.

The ministry announced that it had also approved four more drugs for restricted use in the current outbreak – Remdesivir, ZMapp, favipiravir, and Regn3450-3471-3479. It added that Remdesivir had already been administered to one Ebola patient.

ZMapp, favipiravir, and another drug, GS-5734, were given to patients in the 2013-2016 Ebola outbreak in West Africa that killed more than 11,000 people, but without delivering sufficient data to establish they were effective in reducing the risk of death, according to the scientific journal Nature.

“What’s changed is that there’s an acceptance that research during an outbreak is something we need to do,” Daniel Bausch, director of the UK Public Health Rapid Support Team in London, told the journal. “It’s an opportunity and an obligation, not a luxury item.”

The history of the drug

After discovering that an Ebola survivor had retained antibodies to Ebola 11 years after becoming infected, they isolated the antibodies, tested them, and singled out mAb114 as the most promising for treatment.

“We took the blood of a patient who survived the 1995 Ebola outbreak in [the town of] Kikwit,” explained INRB Director Jean-Jacques Muyembe, referring to the epicentre of a Congolese outbreak that claimed 250 lives.

“It was from this blood that we developed the monoclonal antibody, which proved to be very powerful,” Muyembe, one of the main scientists involved in the development of mAb114, told IRIN, adding that all the Ebola-infected monkeys the drug was tested on were cured.

The monoclonal antibody works by binding to the surface protein of the Ebola virus and blocking its interaction with human cells.

All five experimental Ebola treatments now in use in Congo are administered under a compassionate use framework developed by the WHO, known as Monitored Emergency Use of Unregistered Interventions, or MEURI.

Normally, pharmaceutical drugs undergo a series of rigorous clinical trials involving hundreds or even thousands of volunteers, often over the course of several years, to prove safety and efficacy before they’re made available for wider use.

But when a disease outbreak has a high mortality rate, “it can be ethically appropriate to offer individual patients investigational interventions on an emergency basis outside clinical trials,” according to a WHO statement about the use of MEURI in Congo.

In May, the WHO convened a panel of medical experts to give their opinions on whether experimental Ebola drugs met MEURI’s strict criteria. Although the panel noted that available evidence about the therapies was “well below the usual level” needed to make recommendations, they gave conditional nods to all except mAb114.

According to a summary of the experts’ findings, “limited early data [about mAb114] look potentially promising but more data are needed from clinical trials before recommending its use for MEURI.”

Later in May, a phase 1 clinical trial (which assesses safety) of mAb114 began in the US state of Maryland. None of the 18-30 volunteers are being exposed to the Ebola virus.

Congo’s health ministry says the five experimental drugs will be administered according to strict protocols related to the condition of the patient, ease of use, and the extent to which the treatment team has the required equipment and working conditions.

There is no proven cure for Ebola virus disease, which has a mortality rate of up to 90 percent, depending on the strain. Individuals showing signs of EVD are usually given supportive therapy, which includes balancing fluid and electrolytes, maintaining oxygen status and blood pressure, and treating any complicating infections. 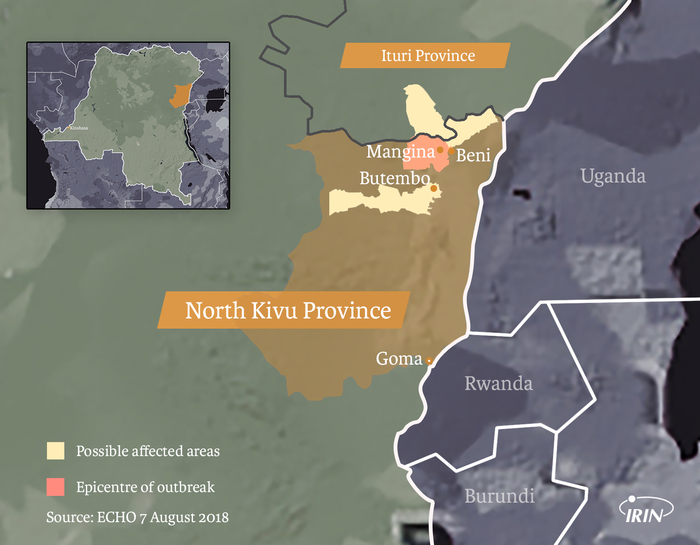 Stopping the spread of the virus

Mangina and the nearby trading town of Beni – where most Ebola infections have been to date – lie in North Kivu province. Cases have also been found in neighbouring Ituri province.

Both provinces are densely populated and prone to conflict, with dozens of armed groups – along with Congolese military factions – vying for power and mineral riches. More than one million people are internally displaced, and the humanitarian crisis has worsened over the past year as refugees regularly flee across the border to Uganda.

The successful containment of Congo’s ninth outbreak (in western Equateur province), which ended a week before the current one started, was partly credited to a new response method called ring vaccination. This involves the painstaking tracing of everyone who comes into physical contact with suspected cases and vaccinating them – along with health workers – with an experimental vaccine, rVSV-ZEBOV.

Although the Congolese government says 2,179 frontline health workers in North Kivu and Ituri have been vaccinated with rVSV-ZEBOV since 8 August, experts say it will be more difficult to implement ring vaccination in a region with active fighting and where the government restricts access to certain areas, known as “red zones”.

Again, the Oicha case highlights this problem. In the Geneva briefing, Salama explained how WHO and health experts had only managed to reach the town this week with an armed escort from UN peacekeepers.

Where insecurity makes ring vaccination impossible, the plan is to vaccinate entire villages or communities where infections occur, but this requires a lot more vaccine. More than 9,300 doses of rVSV-ZEBOV were scheduled to arrive in the affected region from Congo’s capital, Kinshasa, by the end of this week.

“Everyone’s really excited about the use of these drugs, but are they useful in a rural African setting with very little infrastructure? The jury’s out.”

Although Friday’s Oicha news will raise concerns, the rate of infections has not yet jumped alarmingly. After so many Ebola incidents, Congo has established tried-and-tested response systems that contain outbreaks relatively quickly and kept death tolls relatively low. Chief among the reasons why the West African Ebola killed so many people was that it took three months for the virus to be confirmed as the cause.

If you can’t stop it, treat it?

The Congolese health ministry has noted improvements in the condition of patients to whom some of the experimental drugs have been administered, but concerns have been raised about Congo becoming a testing ground for new treatments.

There’s a “rush to evaluate [treatments] because the window of opportunity for evaluating these interventions is always going to be short,” Ross Upshur, a physician and ethicist told STAT, a website specialising in health and medicine, in May, when Congo’s ninth outbreak was in full flow.

In the same article, Salama offered caveats about the experimental treatments: “Everyone’s really excited about the use of these drugs, but are they useful in a rural African setting with very little infrastructure? The jury’s out.”