The EU and Britain have met resistance to a new $85 million project to simplify cash allowances for Syrian refugees. In future, only one contractor will handle the payments and another will monitor the project, replacing systems involving some nine aid agencies.

The donors say the new arrangement, due to start in the next few months, will reduce duplication and improve accountability. The new formula, however, challenges the humanitarian status quo. A senior UN official says it may “undermine coordination” and “create problems”. The atmosphere around the bidding process has been at times “toxic”, insiders say.

Analyst Wendy Fenton of the Overseas Development Institute described the scheme as “deliberately disruptive” and a “real departure from business as usual”. The donors argue the design was a logical outcome of reform commitments made at the World Humanitarian Summit last May and is in the best interests of refugees and taxpayers.

As IRIN has reported, the Lebanon operation is already a pioneer when it comes to using cash and bank cards to support refugees. Needy refugees get a variety of entitlements according to their circumstances, channelled as top-ups on a debit card. They also get e-vouchers to buy food. The key agencies are UNHCR, WFP and UNICEF, as well as a six-NGO group, the Lebanon Cash Consortium. Having moved the various systems to a single card and bank recently, the new proposal will simplify one channel still further.

The proposition – from the EU’s humanitarian aid arm, ECHO, and Britain’s international development department, DFID – departs from the status quo in three main areas: a single agency will manage cash transfers from the two donors; a separate independent contractor will monitor; the project will insist on delivering money, instead of vouchers.

The backers say the new concept is common sense. Opponents believe the move is hurried, the benefits unproven, and that a de facto monopoly will be less effective than the status quo.

ECHO and DFID humanitarian spending in Lebanon in 2016 according to FTS.png 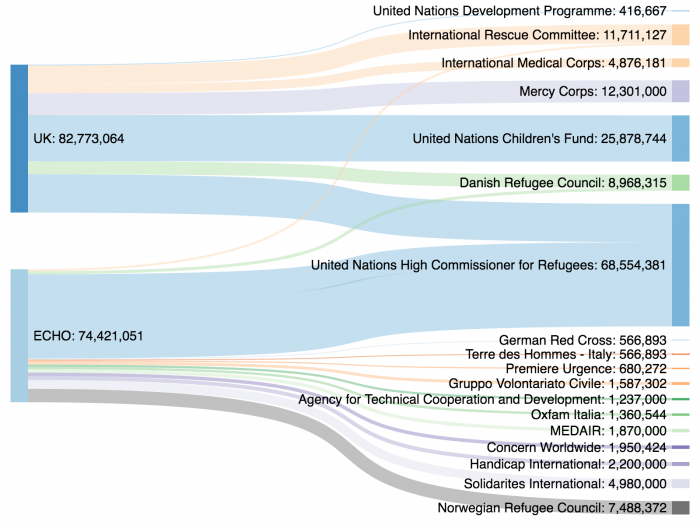 The UN’s humanitarian coordinator in Lebanon, Philippe Lazzarini, told IRIN the current system benefits from the “diversity and comparative advantage” of the variety of agencies involved. He said it represents “good practice” that “optimises and respects the respective mandates of the involved agencies”. He said those involved continue to look for further efficiency and impact gains, but “calling for a single agency provider in this context bears the risk to undermine the comprehensive coordination efforts”.

UN agencies have lobbied vigorously against the Lebanon move, sources close to the process told IRIN. Another source said that even within the UN family there were “massive disagreements”, as agencies fear the prospect of falling turnover and influence.

New research from Ukraine suggests that disputes over the management and coordination of cash-based aid is far from unique to Lebanon. In a fresh report from ODI, the risks of a muddled approach are described clearly: “Strategy and coordination became highly political, mandate-driven and largely removed from analysis on the best way to assist people. The lack of clear, global guidance on where cash transfers fit in humanitarian coordination and planning enabled agencies to contest arrangements that did not favour their institutional interests.”

A blog posting on the Cash Learning Project (CaLP) website, which included views of other critics, said: “we’ve been talking to the people involved. There is no hiding the widespread concerns.” It mentioned worries about how the transition to a new system would be handled, and how the interests of the most vulnerable refugees would be protected. It also stated, more bluntly, the fact that NGOs faced shrinkage: “NGOs now find themselves at risk of losing the footprint among communities and people in need that cash assistance has provided them for years”. More broadly, critics claim there will be a drop in quality and sophistication while the “marketplace” will become concentrated in the hands of those agencies “big enough to bid”.

“If not now, when?” – the title of a presentation by the two donors echoes an influential expert panel, which categorically backed increased humanitarian cash with that provocative top recommendation. Given a hostile reception from some of the biggest players in the sector, DFID and ECHO issued a briefing note on 14 February defending the project. In a veiled warning to vested interests, it said “it is the interests of the beneficiaries, and no one else’s that must be put front and centre”. With a specific nod to the Grand Bargain, the note argues that the plan is a practical example of reforms that the humanitarian community has already committed to. 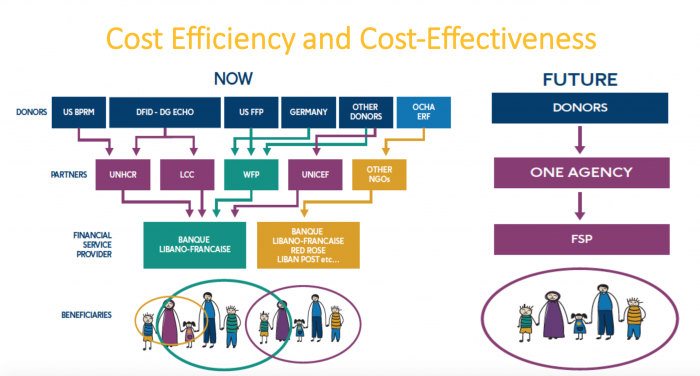 Not radical? A page from the presentation by DFID and ECHO

The note goes on to argue that the project will reduce duplication and lower overhead costs. It will be monitored independently and so be more transparent and accountable. The current humanitarian aid set-up is unfit for the long haul, ECHO and DFID argue. As the Syria crisis enters its seventh year, new sources of funding, including longer-term development finance, need to be coaxed on board: “it is the beneficiaries who will lose out if no additional funding can be secured,” the note says.

While robustly defending the project, ECHO and DFID are at pains to deny it’s a model or a blueprint. However, sources close to the process, while denying it was a “radical change”, said it could potentially have a “global effect”. Another analyst has used the phrase “a new humanitarian order”. The project would be only a small slice of overall aid spending, about seven percent of 2016 humanitarian funding in Lebanon.

The UN’s Lazzarini argues that since the project only commands a portion of the cash aid in Lebanon, rather than reducing duplication, it’s actually setting up a parallel system “outside the current coordination structure”. Other donors, notably the US and Germany, have yet to join the ECHO-DFID approach and continue to fund the current mechanisms.

The single contractor aspect of the project is drawing plenty of debate. However, the other aspects of the package are also potential game-changers, observers say. To divorce operational agencies from their own monitoring and evaluation would tackle a widespread weakness in humanitarian accountability. Fenton summarises the problem as follows: “agencies assess, implement, and monitor and evaluate their own programmes.” New policy from ECHO published late January suggests the delivery and appraisal functions may be split elsewhere, not only in Lebanon. 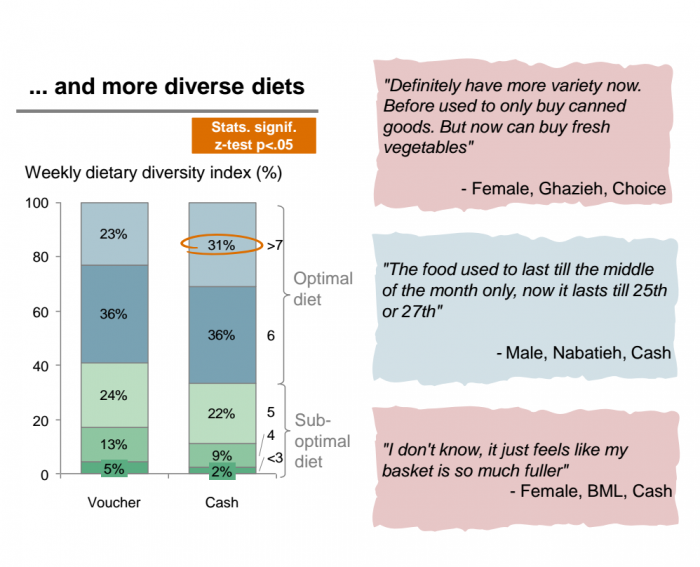 BCG for WFP
IRIN exclusively obtained this Boston Consulting Group report commissioned by WFP. The research finds refugees receiving cash eat better than those getting food vouchers
On the third plank of the ECHO-DFID concept – the use of money instead of vouchers – WFP has often preferred systems of food e-vouchers redeemable at approved shops. The ECHO-DFID deal will no longer pay for food vouchers, arguing that pure cash is preferred by refugees and better for their welfare. IRIN has obtained a study commissioned by WFP that confirms this (perhaps surprising) finding – the Boston Consulting Group research concluded that refugees receiving cash ate a better and more varied diet than those using e-vouchers.

Proponents of the new package say resistance they face often stems from aid agencies’ self-interested fear of reduced turnover, influence and relevance. Big UN agencies specialise, be it on children, food, health or refugees. Multipurpose cash undermines their operational models and cuts across their mandates. These “silos” of the current system make for “political barriers” to change, according to a source close to the process.

Another analyst told IRIN that NGOs, as well as UN agencies, need to “get their act together” and make a renewed case for their value and relevance.

Some agencies may have superficially embraced the opportunity cash offers, but only “as long as it doesn’t significantly challenge their own interests and incentives”, said Fenton.

There’s an “enormous amount at stake”, said Nick van Praag, who believes cash has become a lever to enable broader changes in the aid system. There will be a “winnowing out” of aid agencies and their roles, he said. Van Praag’s organisation, Ground Truth Solutions, is researching attitudes around aid operations in Lebanon and other countries. Aid agencies should “stop haggling about modalities” and start asking affected people about their needs and opinions about the aid package they get, he said.

Alex Jacobs, the director of CaLP, said the new contract is “a really big deal” and marks a significant change in donor approaches. He expects a growing debate about the relative merits of cost efficiency and scale versus the benefits of diversity and inclusiveness. Lazzarini said: “I also believe that in the longer term a single agency provider will create more problems than it addresses.”

Donor attitude: “go sit in the corner if you don’t want to play nicely”.

These donors do not seem in the mood to stand on protocol and are driving a hard bargain on substance and price. On mandates, ECHO’s huge cash support deal for Syrian refugees in Turkey is managed by WFP, not the UN’s refugee agency, UNHCR, despite the fact that there was no food element in the project. Opening competition to a wider range of bidders is mentioned in ECHO’s latest policy on cash transfers. The guidance also sets a maximum overhead margin of 10 percent on cash handling contracts and full “line of sight” throughout the transaction chain.

Tthe donors are the “customer” and they simply “didn’t like the way they were being served”, said one analyst.

Is the donor customer always right?