Twice a week, Farid Rahimi gets up at dawn, wraps a blanket around his shoulders to keep warm, gathers his empty jerrycans, and waits beside the tap outside his house in a hillside neighbourhood above Kabul.

At 7am sharp, water bursts from the pipes, filling Rahimi’s tank and buckets. He labours away, saving every drop until – just an hour later – the last drop falls.

Afghanistan’s capital is running dry – its groundwater levels depleted by an expanding population and the long-term impacts of climate change. But its teeming informal settlements continue to grow as decades-long conflict and – more recently – drought drive people like Rahimi into the cities, straining already scarce water supplies.

With large numbers migrating to Kabul, the city’s resources are overstretched and aid agencies and the government are facing a new problem: how to adjust to a shifting population still dependent on some form of humanitarian assistance. 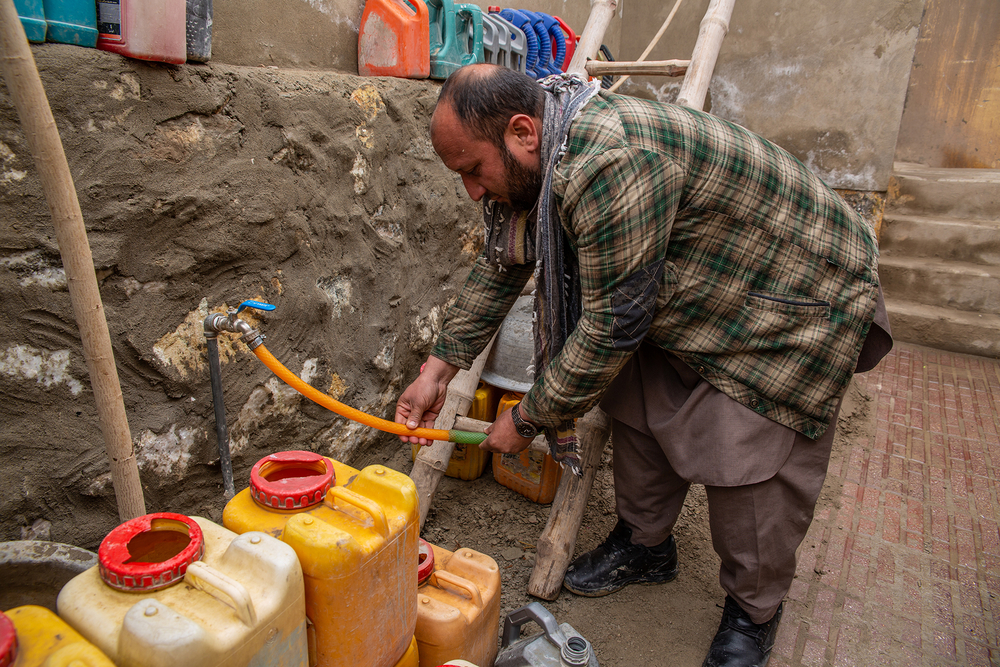 Stefanie Glinski/IRIN
Farid Rahimi prepares to fill jerrycans with water. His family has access to clean drinking water twice a week for only an hour. Rahimi fills up every available bucket and jerrycan to make sure the water lasts through the rest of the week.

Rahimi came to Kabul nine years ago to find safety and better job opportunities, but he says it hasn’t been easy. He now shares his house with 12 family members and each month he pays a steep 1,500 Afghani, or $20, for water from a private company.

“Last year we shut down our well,” Rahimi said. “There wasn’t any water left. A few years ago, the situation was a lot better.”

The UN says more than half a million people in Afghanistan were forced to leave their homes in 2018 due to conflict and drought. An even greater number of Afghans, more than 800,000, returned from Pakistan and Iran during the same year. About seven percent of Kabul’s population are either displaced by war or returnees who previously fled the country, according to estimates from the UN’s migration agency, IOM.

The majority migrate toward cities, which are now home to one third of Afghanistan’s population of 36 million. According to UN Habitat, 80 percent of urban areas in Kabul are informal settlements. 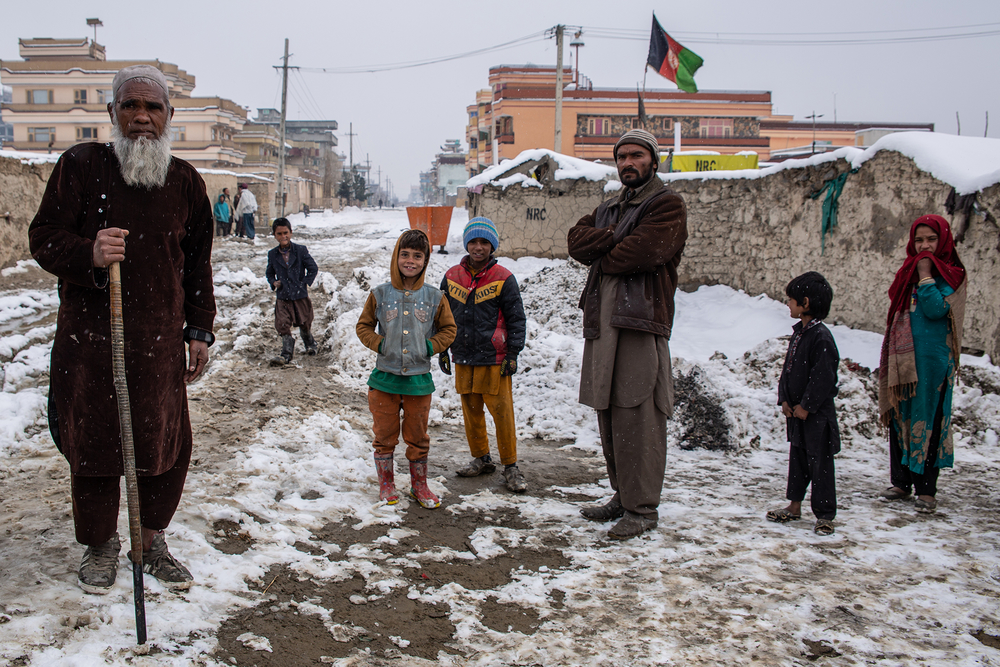 Stefanie Glinski/IRIN
Kabul’s outskirts are home to informal settlements where the majority of residents are people displaced from the countryside by fighting and drought. While some families arrived in recent months, others have lived in these settlements for years.

In Rahimi’s case this means that a muddy, unpaved road winds its way through his neighbourhood and up an overpopulated hill, where simple mud or concrete houses have been built on “grab land”, claimed by those who arrived in Kabul over the past decade without initially registering or even purchasing the property. Electricity is available sporadically, while health facilities and schools are either absent or far away. A private company is in the process of installing water pipes throughout the neighbourhood, but most public services are yet to be provided by the government.

But when people from rural areas leave their homes for the cities, they may also leave behind the humanitarian aid they had previously relied on.

Pir Mohammed arrived in Kabul five months ago, escaping violence and bombings in his native Helmand province, a Taliban heartland in southern Afghanistan.

The 35-year-old had hoped the move would make his life safer and easier. But the family lives in a tent in the middle of Afghanistan’s bitter winter; his cousin has pneumonia.

“It’s just so cold. In Helmand, we received some assistance. Here, we were told the government would help us, but nothing has happened so far,” Mohammed said, while digging a trench outside his shelter to prevent water from leaking into the tent. 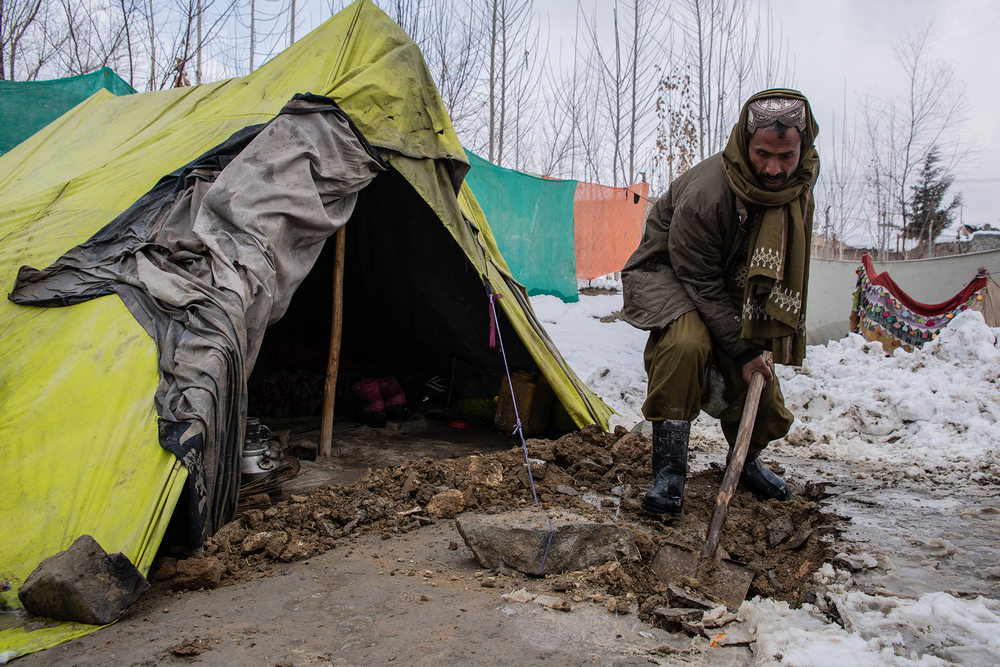 Stefanie Glinski/IRIN
Pir Mohammed shovels dirt in front of his cousin's tent. His family arrived in Kabul five months ago, fleeing fighting and air strikes in Helmand province. He says it’s safer in Kabul, but he can’t access the humanitarian aid he relied on back home.

Much of the snow falling onto the family’s home is melted and used as drinking water. The current winter has been harsh, with temperatures dropping well below zero most nights.

“Rurally, it’s easier because you engage with communities at the local level. In Kabul, we need to engage with the government and other actors,” Parker said. “It needs a shift in thought and more players need to be on board.”

Yet city planning and humanitarian work often do not go hand in hand, says the city’s deputy mayor, Shoaib Rahim. “Humanitarian services are meeting immediate needs, but urban planning is for the long term,” he said.

While aid agencies do provide some services in urban areas, especially in places where newly displaced people have settled, both private companies and the government take up large – yet still insufficient – chunks of the work.

The majority of former refugees and asylum seekers returning from abroad, for example, settle in urban areas, where they may need both short-term aid and and more long-lasting help.

Comparatively, urban residents are still better off than their rural counterparts. The proportion of people with access to basic water is 63 percent countrywide – 89 percent for the urban population and 53 percent for rural households, according to UNICEF. But migration patterns and a changing climate point to long-term strains on water supplies. 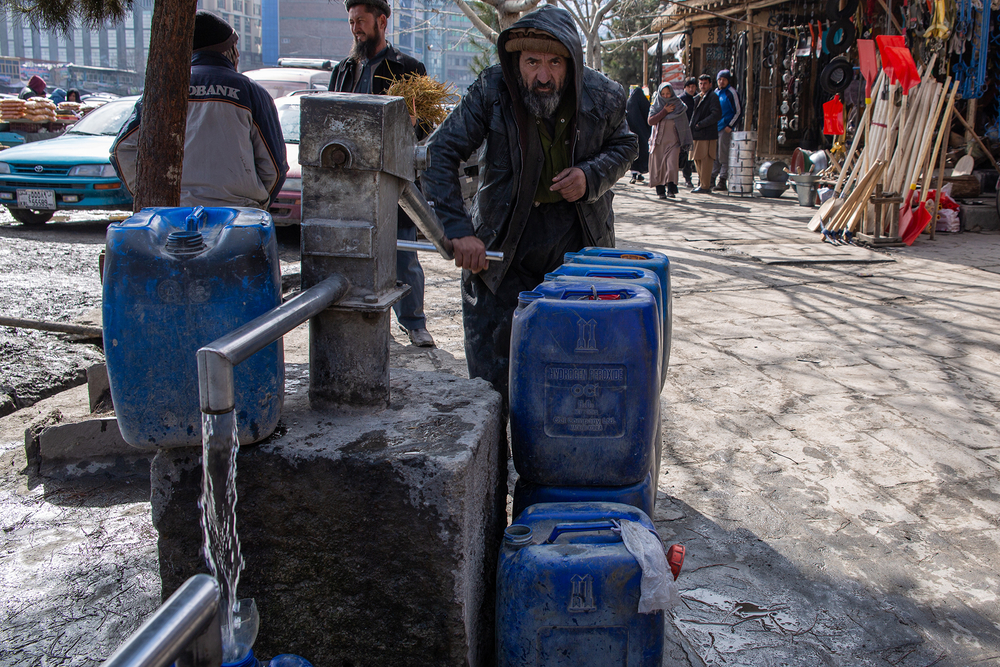 Stefanie Glinski/IRIN
A man draws water from a public pump in Kabul. Many households lack access to water in their homes, and groundwater levels have been depleted in recent years.

Afghanistan is one of the world’s top eight countries affected by climate change-induced water shortages, says Paulos Workneh, who heads the water, sanitation and hygiene programme for UNICEF in Afghanistan. As groundwater deteriorates, city dwellers are robbed of their main source of clean water.

“Most of Kabul’s water was accessed through wells, but the situation is now under stress,” Workneh said. “Surface water is polluted by industrial waste, pit latrines and chemicals leaping into the rivers. With rainfall patterns decreasing, sources don’t fill up as quickly anymore.”

While Kabul is starting to tackle the issue of informally built properties – including the registration of many houses initially constructed without permission – one fact remains: the capital grew too quickly.

“The city had 4.6 million people in 2002 and, by 2012, the numbers went up to 7.1 million,” said Koussay Boulaich of UN Habitat, which is offering technical support to a government project responding to the city’s urbanisation trend.

By 2050, one in two Afghans will live in cities, Boulaich said. A similar shift will be needed among the many humanitarian and development groups now concentrating their work in Afghanistan’s rural areas. 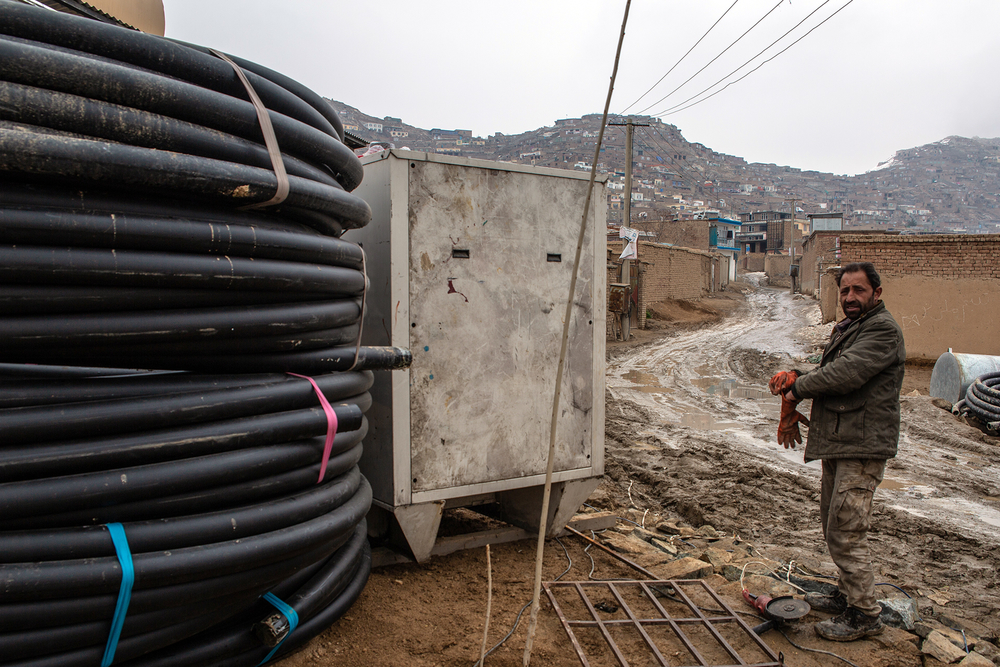 Stefanie Glinski/IRIN
A private company has started drilling and construction for new water pipes in this Kabul neighbourhood. Informally built homes line the hillsides in the background.

One of the government’s programmes for urban development, including water, is its “City for All” scheme, which aims to turn the country’s urban migration into economic growth, increase living standards, and even contribute to peace. As part of the plan, informal areas in Kabul are now being registered, roads are being built, and water systems are being set up slowly, with technical help from international agencies.

“The government has built the pipes in our area. There are none in my house yet, but I do see progress,” he said.

For now, however, his household well has dried up. He gets water for his family only by filling up buckets at a neighbour’s house, and he’s worried what will happen if this supply also evaporates.

“I just hope we don't run further out of water,” Atik said. “We’re already using a lot less than a few years ago.”

In Rahimi’s hillside neighbourhood, the government has promised to pave the road in the coming months, while mainly private companies supply the available water.

Merza Mohammed, a 42-year-old employee with Absharan Tagyet, the company laying pipes down Rahimi’s street, said the new infrastructure will serve roughly 1,300 households – though at a price more expensive than the city government’s standard rates.

“We’re a local business supplying areas that the government has not yet reached,” he said.

A few years ago, water was more widely available throughout the city. But prices have more than doubled, he said.